When they were first released, Space Battleship Yamato and Farewell to Yamato sold more tickets than any other movies in the history of Japanese cinema. But no one bought a ticket to the premiere of The New Voyage. Why? Because this revolution WAS televised.

In keeping with Yamato tradition, this film blazed another new path for animation in both its format and its venue. When The New Voyage aired on the Fuji TV network July 31, 1979, it had the same impact on television that its predecessors did in the cinema, opening up major networks for more anime programming. The New Voyage also popularized the term “tele-feature,” which soon caught on to describe made-for-TV movies. Yoshinobu Nishizaki’s very next project, Space Carrier Blue Noah, premiered as a tele-feature and then went into a weekly broadcast.

It was widely known that The New Voyage was also to be the stepping stone to a new production referred to at the time as Yamato Part 3. This knowledge stoked the flame even higher and resulted in a TV rating of over 25%, meaning that over a quarter of all the TV sets measured in Japan were tuned in. The Yamato boom was still booming. 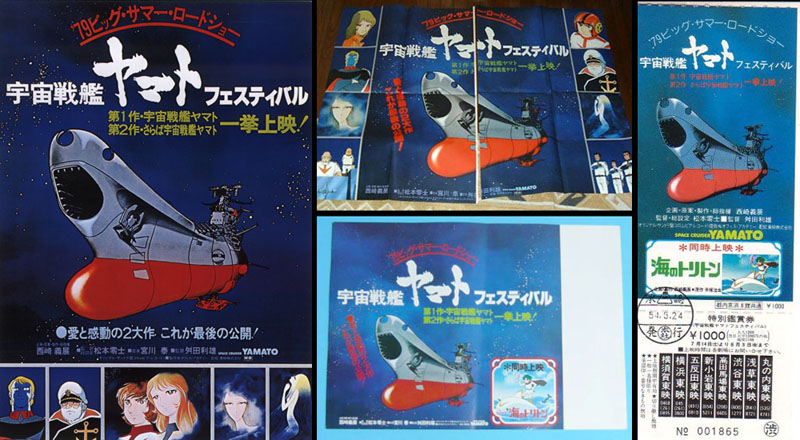 Another reason 1979 was a good year to be a Yamato fan: the ’79 “Big Summer Roadshow” brought the first two movies back to theaters (along with Triton of the Sea) during the month of New Voyage‘s premiere.

One year later, The New Voyage was rebroadcast the night before Be Forever Yamato‘s theatrical premiere, this time containing roughly two minutes of additional scenes that weren’t seen in first airing. There were a few minutes over and above this that had never been completed, making it only as far as key animation before being cut.

That wasn’t necessarily to do with running length, however. According to animation director Noboru Ishiguro, production of The New Voyage was running so close to deadline that later segments of the film were delivered to the Fuji network while earlier segments were already airing! All of the deleted scenes received attention in the fan press and tiny, intriguing glimpses were seen in books and magazines. But until they were finally released on home video in later years, they were the stuff of legend. 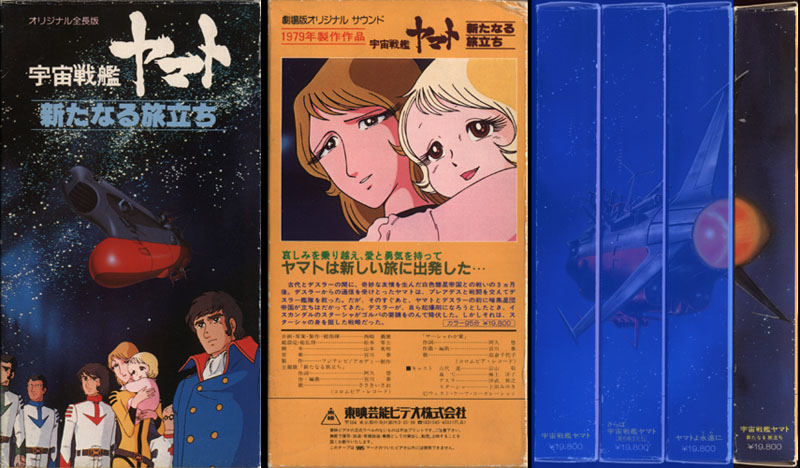 The New Voyage first arrived on VHS and Beta along with the other films in March 1983 to tie in with the premiere of Final Yamato. Each tape box had part of an image on its spine (above right) that combined into a painting done for Final Yamato‘s release. VHS and Beta video tapes were also released by Nippon Columbia in 1983, but are not shown here. Victor released The New Voyage on VHD and VHS in 1983 and ’84 respectively, but no images of these have yet been found. 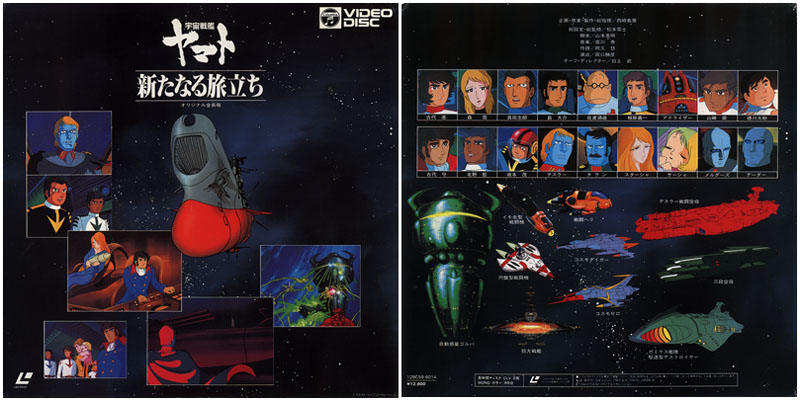 A year after the VHS releases, Nippon Columbia followed up with their own handsome edition of The New Voyage on LD. Unlike the other films released in this format, the sleeve did not fold out. 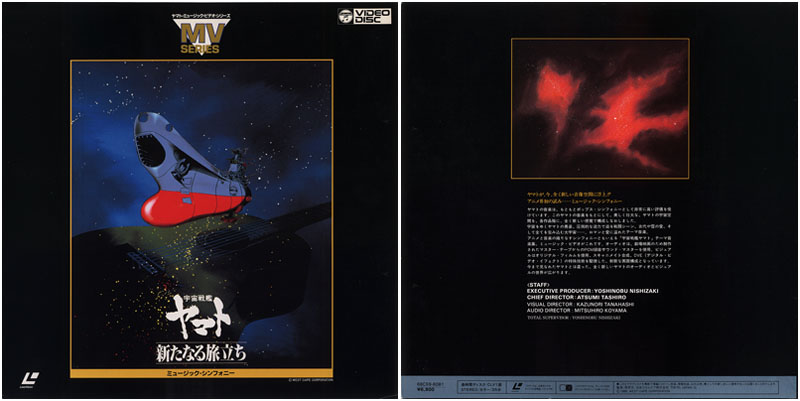 Nippon Columbia, long the home label for Yamato music, was the natural choice to release the MV series, an innovative set of programs that combined re-edited footage with symphonic scores. They were released on both VHS and LD. Read more about the MV series here. 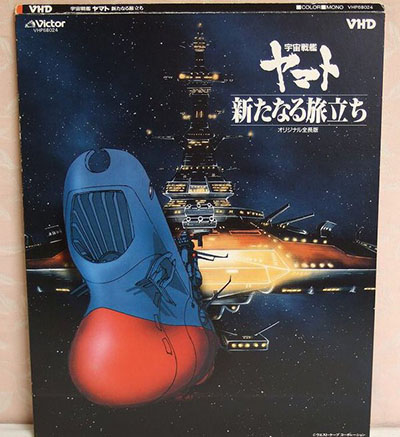 Victor tried valiantly to uphold the VHD (Video Home Disc) format, but the rising tide of Laserdisc would drive it to extinction in the late 80s. Nevertheless, the entire lineup of Yamato movies could be found on VHD from 1983-85. Most were 2-disc sets, but The New Voyage only needed one. Victor also released the films on VHS at the same time as Toei. 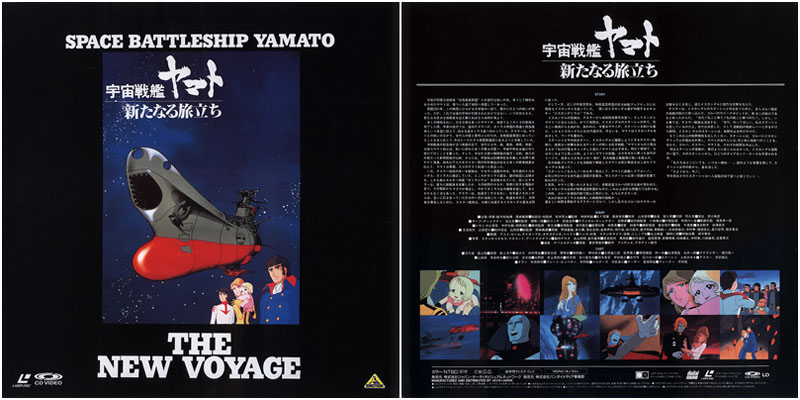 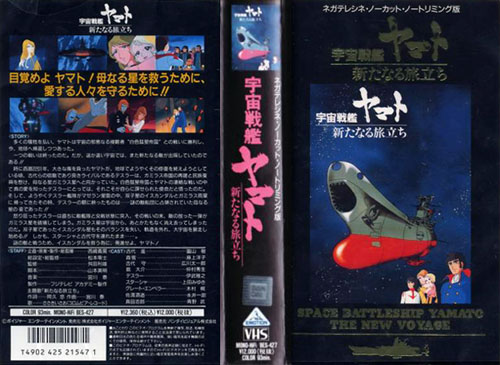 The entire Yamato video catalog found a permanent home with Bandai’s Emotion label in 1989 and got a repackaging on both of the now-standard formats. The LD was part of the first Yamato box set, called the “Perfect Collection.” Containing all five movies and a bonus disc of trailers and other artifacts, it also provided the first official English translation of the title. Both the LD box and the VHS sleeve featured gold-stamped logos. 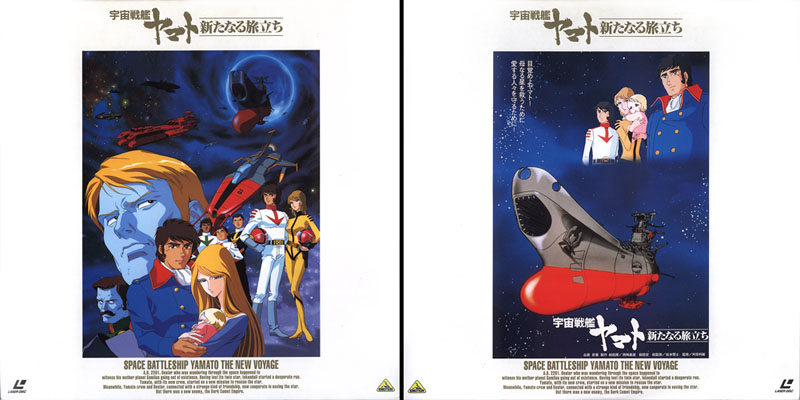 Since their first Yamato LDs were all limited to pricey box sets, Emotion addressed the need for individual releases in 1993, a year before Yamato‘s 20th anniversary. They sweetened the deal with stunning new jackets by anime designer Hiroyuki Kitazume (above) and extended liner notes on the inner sleeve (below). Also included for the first time were the deleted scenes, as a bonus feature after the movie. They appeared again a year later as a bonus feature in Emotion’s Yamato III LD box. 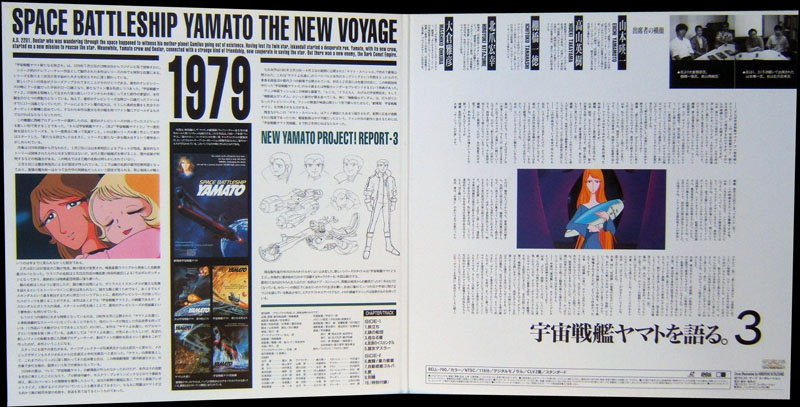 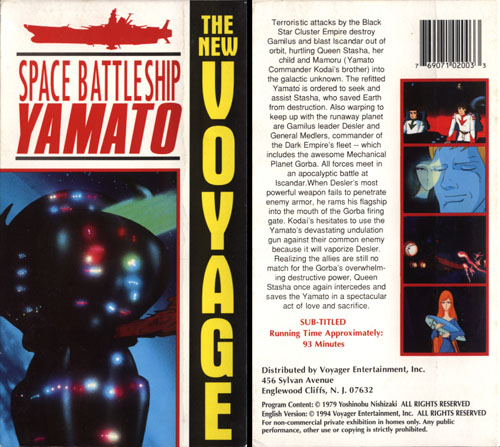 The New Voyage made its long-awaited US home video debut in November ’94, along with all of the other films and the three Star Blazers TV series. 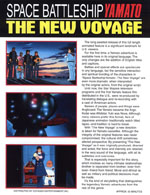 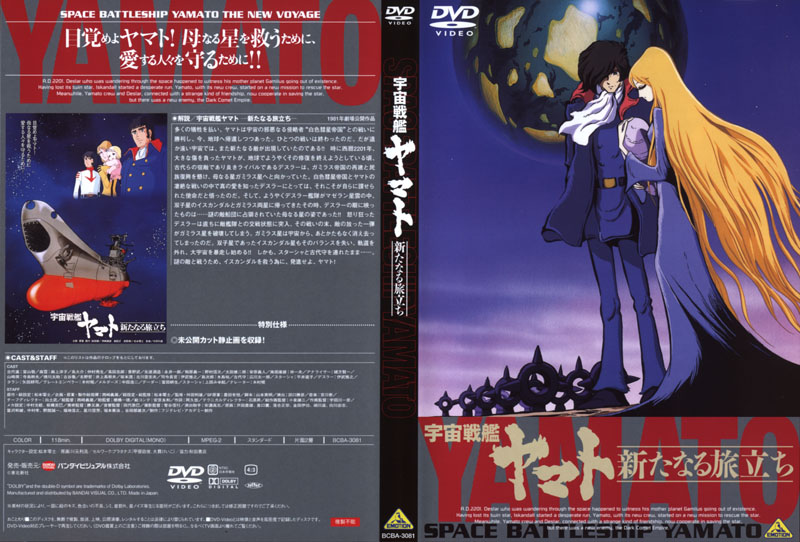 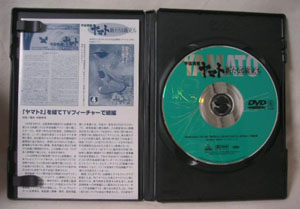 The new era of Yamato home video began here, with the first DVD release of all five movies, each of which came with an insert filled with historical liner notes. The New Voyage disc contained the now-customary deleted scenes as a bonus feature.

The rental-only version is shown below. 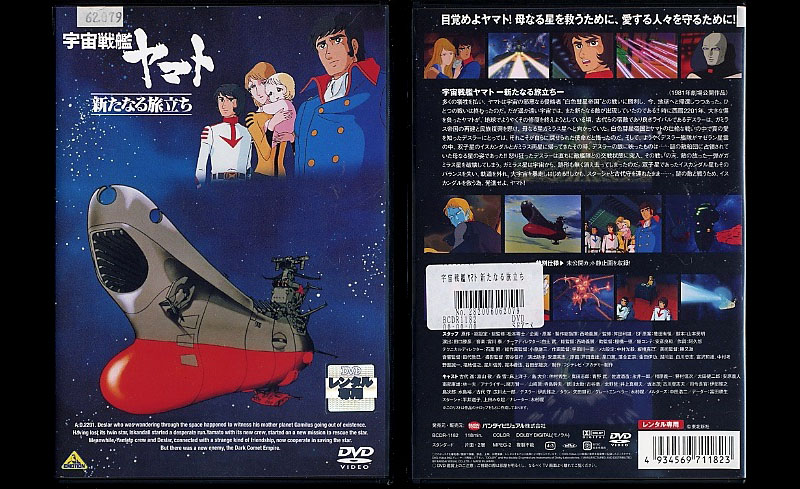 Emotion teamed up with Asian distributor PW to release all five movies in a box set. The region 3 edition of The New Voyage is highlighted above right. 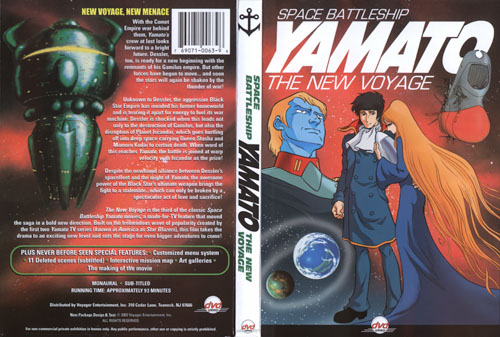 Voyager followed suit with its subtitled DVD release four years later, which included a host of extra features including all of the deleted scenes, augmented with music and accessible either individually or streamed into the film itself, the first and only time this has been done. The movie is also part of Voyager’s “Yamato Collection” DVD box, released in March 2003. 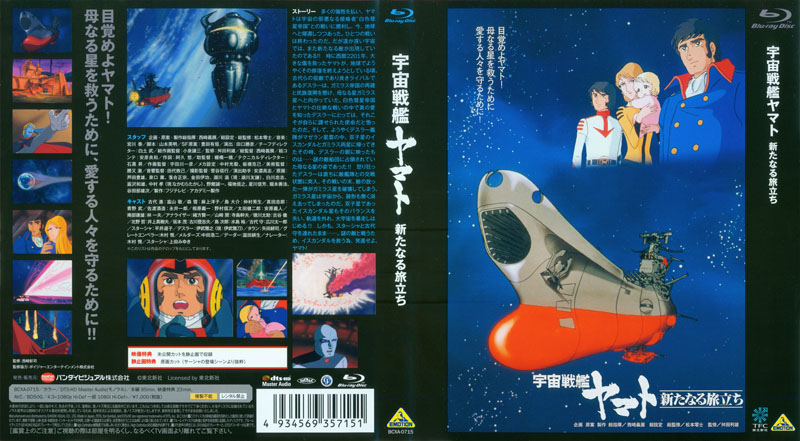 All five of the movies finally came to Blu-ray in 2013. It goes without saying that the primary attraction was seeing each film in the best possible picture quality. In one case, this wasn’t necessarily an improvement; The New Voyage was the most rushed of the five films, so numerous animation errors and prodigious cel dirt actually detract from the viewing experience. The bonus feature is the same collection of deleted scenes seen since the laser disc era. 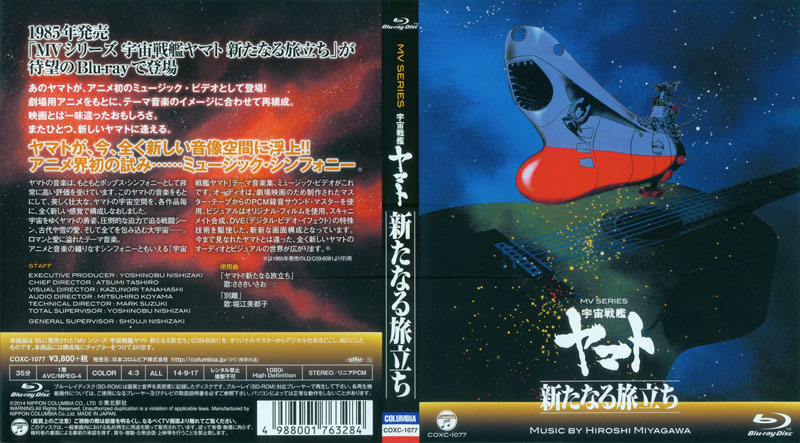