The theatrical release of Be Forever Yamato is really two stories in one. There was the story fans bought their tickets to see, and then there was the wild, outrageous, everything-including-the-kitchen-sink promotional campaign that turned the summer of 1980 into one big continuous Yamato-themed Woodstock. It was a great time to be a fan and probably an exhausting time to be the parent of a fan. Some event or other was always underway or coming up, and anyone who managed to hit all of them would have earned themselves the title of Iron Otaku.

The absolute showstoppers were a sea cruise called the “Voyage of Adventure Roman,” a concert and variety show called the “Festival in Budokan,” and a 3-day train trip called the “Mystery Tour.” Each of these involved members of the cast and crew, and each attracted fans by the thousands vying for just a few hundred available seats. The lucky few who won a spot would have stories to tell for the rest of their lives. The others at least had the consolation of knowing that they were at the epicenter of a major pop culture event that would never come again. 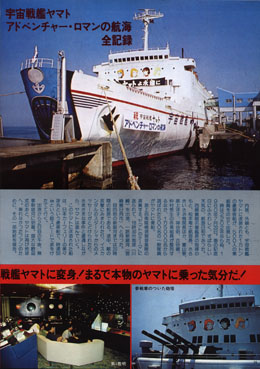 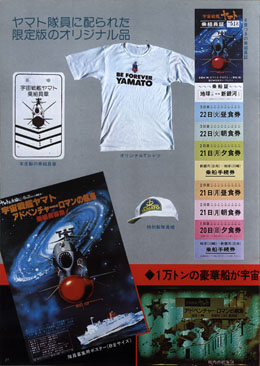 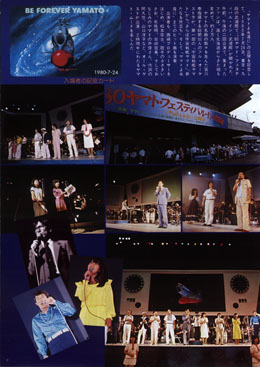 Above: coverage of the cruise and the “Festival in Budokan” from the Yamato Big Collection magazine
(Sonorama, September 1980). Click on each page to view an enlargement.

The movie itself was just as packed with innovation, tricked out with all sorts of technical experiments to enhance the film. For the first time, a Yamato movie was accompanied by 4-channel stereo, special effects could now be rendered with a video enhancement process called “Scanimation,” and then there was the mysterious “Warp Dimension.” This was teased throughout the summer with no explanation, just a promise that it would offer an entirely new visual experience.

Since the statute of limitations has passed, we can dispense with the secrecy and reveal that “Warp Dimension” was a brilliant transition from the normal 3X4 picture ratio (the standard at the time for most Japanese cinema) into 16X9 widescreen at a pivotal moment in the movie. Yamato dove into a space storm and by the time she emerged at the other side, the curtains had been pulled farther apart and the projectionist had switched over to widescreen for the remainder of the film. The effect must have been mind-blowing.

Today it would be a rare but not impossible treat to enjoy that again. It has happened: the Yamato movies have returned to theatres on two separate occasions, once in 1987 and again in 2005. By the time of the latter showing, it’s reasonable to assume that every theatre in Japan was capable of fulfilling the technical requirements to recreate the experience. But out here in the rest of the world, we must content ourselves with home video. 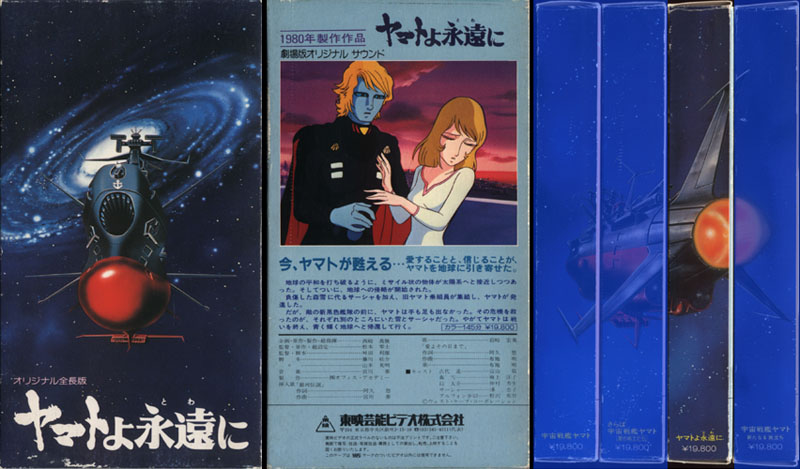 Be Forever and the three earlier movies were released simultaneously on both VHS and Beta to tie in with the March 1983 premiere of Final Yamato. The boxes had an image of the ship spread across their spines (above right), a painting done for the last film’s release. Toei chose to deal with the anomaly of “Warp Dimension” by not dealing with it at all. The picture remained full frame after the transition point, cutting off the action on either side and becoming rather claustrophobic as a result. The image was horizontally squeezed for the end credits, then followed by a pictureless song titled “Two Who Love,” which presumably played after the film in theatres. This treatment would be repeated on all video releases of Be Forever until the end of the decade. VHS and Beta video tapes were also released by Nippon Columbia in 1983. Advertised in the Final Yamato movie program book, Victor’s VHDs hit the market one month after the film opened. They were more durable than tapes but still susceptible to the same sort of damage that could afflict LP records. Their packaging was more impressive, especially when a long-running movie was spread out over two discs.

The Victor videotape releases occurred in 1984, presumably after deals with Toei and Nippon Columbia had expired. Nippon Columbia, long the home label for Yamato music, was the natural choice to release the MV series in 1984, an innovative set of five home video releases (one for each movie) that combined re-edited footage with symphonic scores. For reasons that are still unclear, Be Forever was the only one limited to VHS; the other four were released on both VHS and Laserdisc. They were ultimately re-released on Blu-ray in 2014. 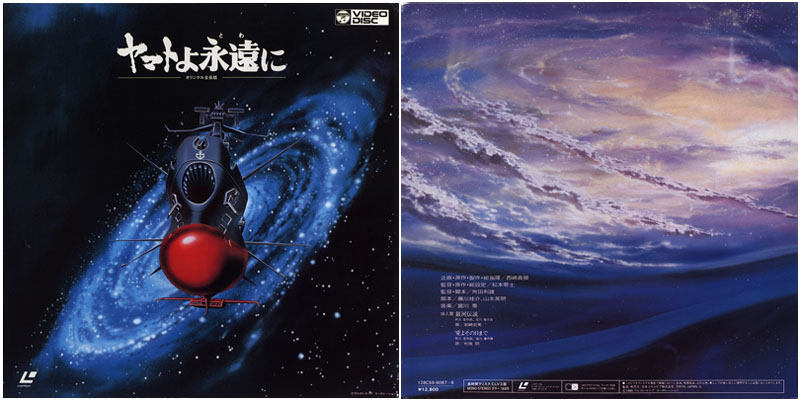 A year after the MVs made their debut, Nippon Columbia followed up with their own handsome edition of Be Forever on LD. Again, the “Warp Dimension” effect was compromised, but this would be the last time. Outer sleeve shown above, inner sleeve shown below. 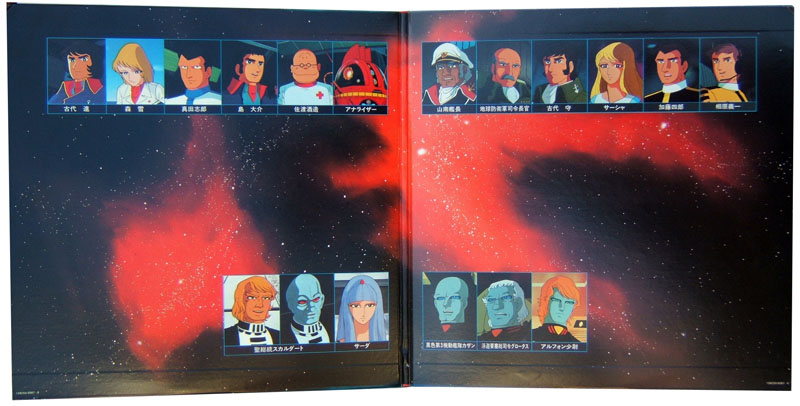 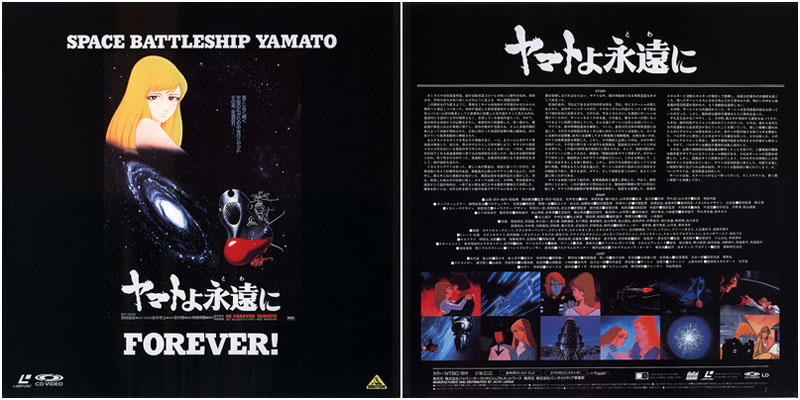 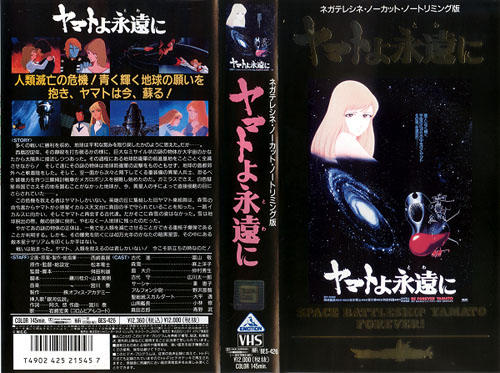 The entire Yamato video catalog found a permanent home with Bandai’s Emotion label in 1989 and got a repackaging on both of the now-standard formats. The LD was part of the first Yamato box set, called the “Perfect Collection.” Containing all five movies and a bonus disc of trailers and other artifacts, it also provided a new English translation of the title, but Space Battleship Yamato Forever was destined not to stick. Under Bandai’s wing, the “Warp Dimension” effect was preserved by switching from full screen to letterbox at the transition point, which would be the new standard for the 1990s. 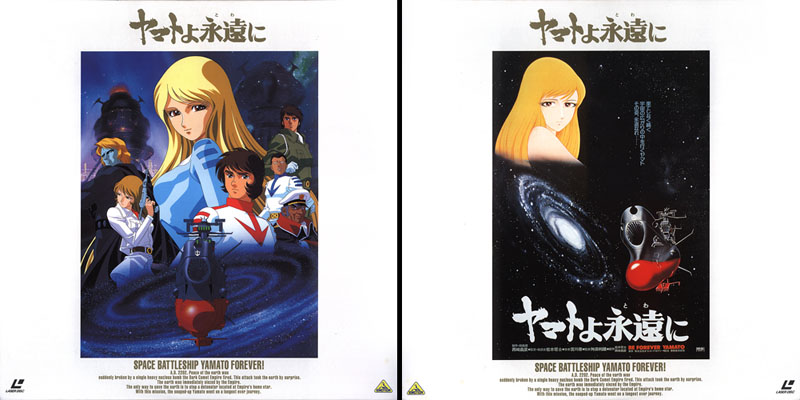 Since their first Yamato LDs were all limited to pricey box sets, Emotion addressed the need for individual releases in 1993, a year before Yamato‘s 20th anniversary. They sweetened the deal with stunning new jackets by anime designer Hiroyuki Kitazume (above) and extended liner notes on the inner sleeve (below). Also included was the original theatrical trailer. 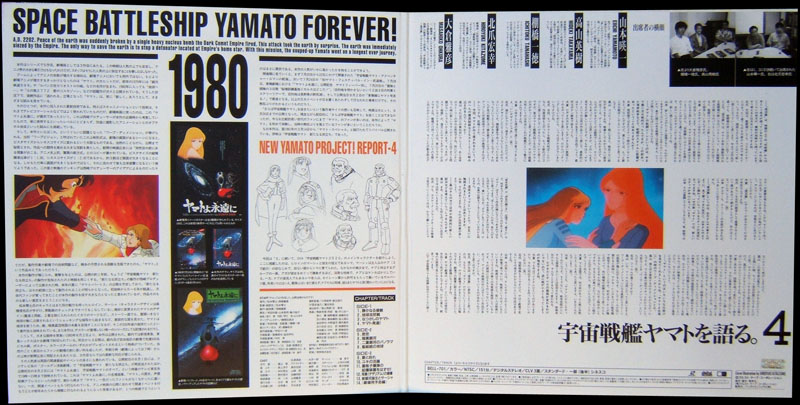 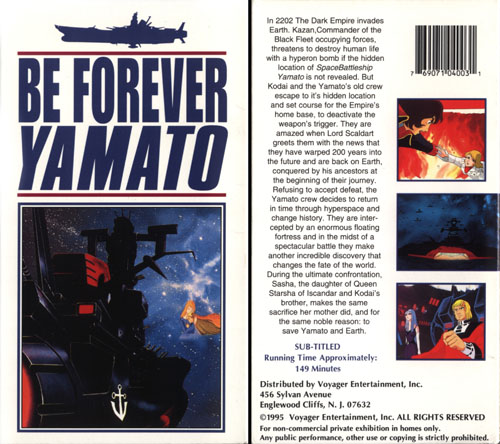 Be Forever made its long-awaited US home video debut in November ’94, along with all of the other films and the three Star Blazers TV series. The “Warp Dimension” effect is shown in letterbox, as in the Bandai release. 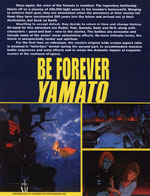 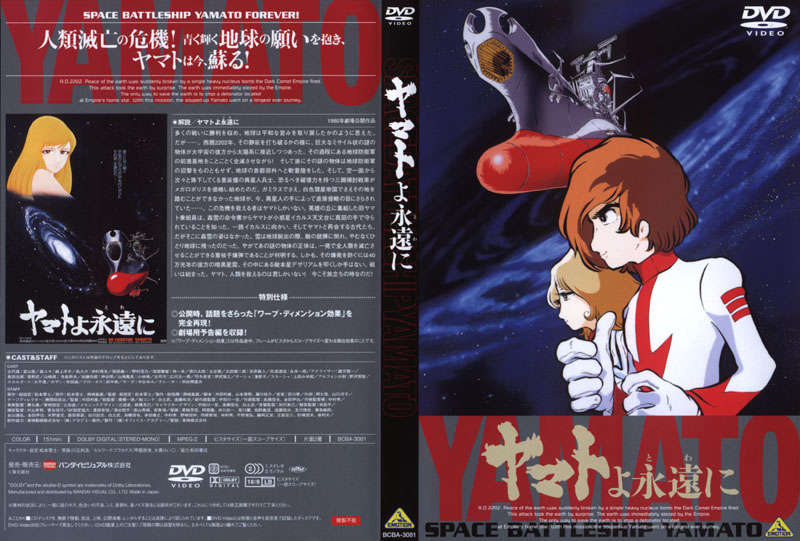 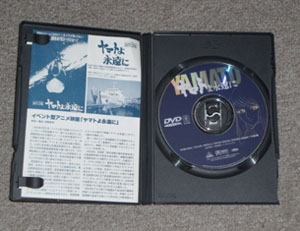 The new era of Yamato home video began here, with the first DVD release of all five movies, each of which came with an insert filled with historical liner notes. A new and somewhat curious treatment was given to the “Warp Dimension” effect on this release, which unfortunately compromises the first part of the film. Here, the entire movie was letterboxed and adjusted so that the picture remains the same height from beginning to end. Unfortunately, it’s an artificial letterboxing that cuts off the top and bottom of the image as shown in the frame comparisons below. It’s a strange compromise that actually reduces the impact of the transition rather than enhancing it. From this point onward, an unretouched edition of Be Forever would no longer be manufactured in Japan.

The rental-only version of the DVD is shown below the stills. 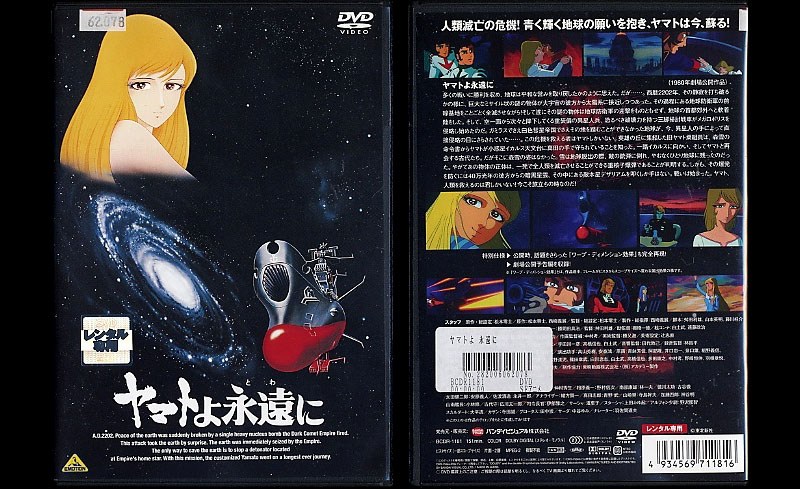 Emotion teamed up with Asian distributor PW to release all five movies in a box set. The region 3 edition of Be Forever is highlighted above right. 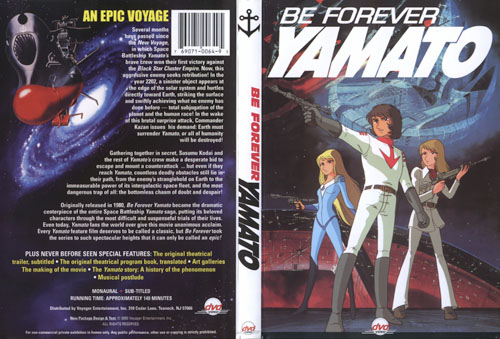 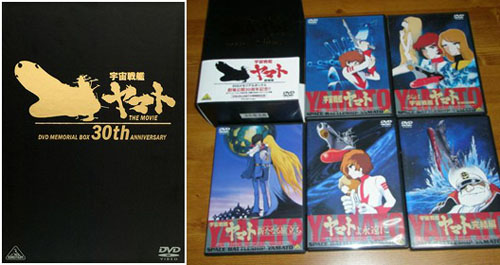 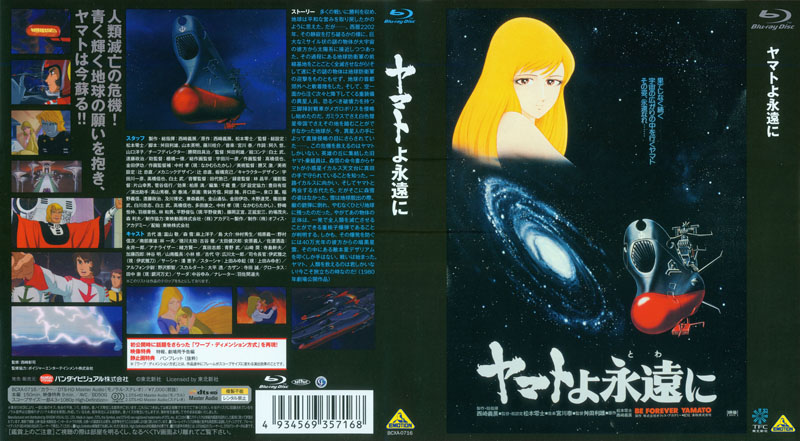 The first chance to truly recapture the “Warp Dimension” experience finally came when all the Yamato movies arrived on Blu-ray in 2013. In addition to the artificial letterboxing on the DVD, the film master was low-contrast and improperly focused. All of these problems were finally rectified for the Blu-ray; the picture has never been sharper and has been fully reformatted an HD screen. The pre-warp portion is full 3X4 and the post-warp widens to full screen exactly as originally intended. It is glorious to behold.

Bonus features include the original movie trailer and a digital version of the program book. The disc can be ordered from Amazon.co.jp or CD Japan. 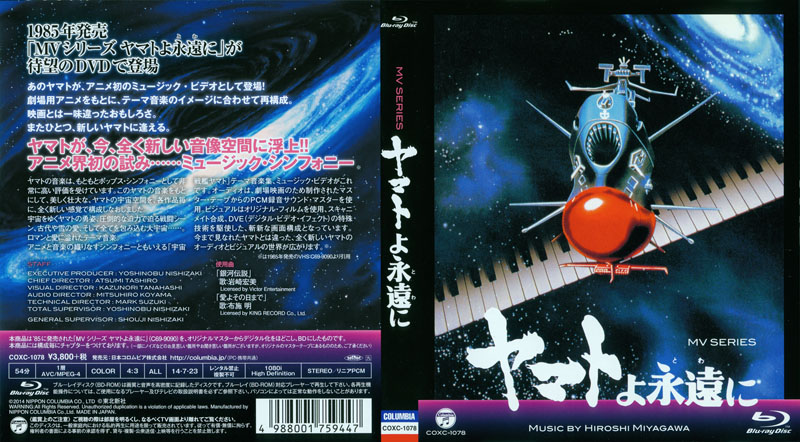