Nevertheless, this was Yamato, and producer Yoshinobu Nishizaki was a pro when it came to motivating the crew. “You won’t regret it afterward,” became his mantra whenever someone questioned whether or not the killer schedule was worth it. Changes were still being made on March 18, 1983; the day before the premiere. The cel paint was barely dry on the film’s epilogue when the clock ran out and the last reels had to go to the printer. Tales are still told of theatre owners receiving the film only minutes before it had to be spooled up. 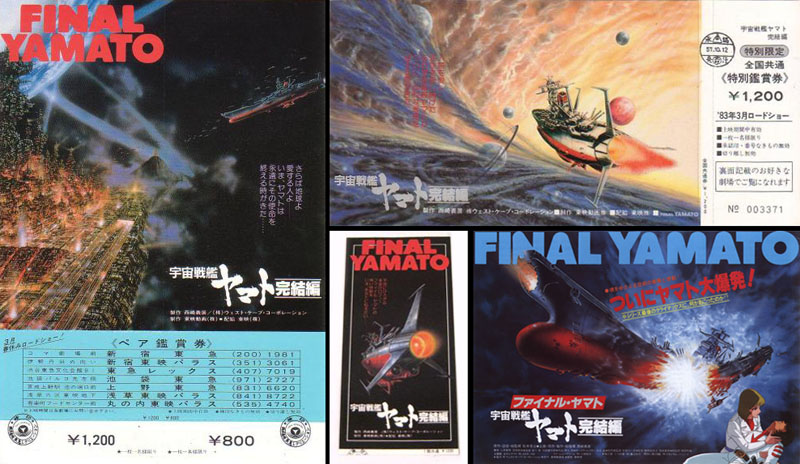 Above: Flyers and movie tickets, circa 1983 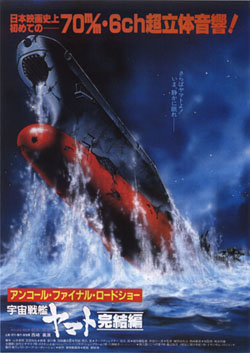 Even on March 19, Nishizaki wasn’t entirely finished. He had been unhappy with the condition of the epilogue when he was forced to give it up, and a spot-check of the first few theatre screenings convinced him that it still wasn’t ready to show…so in an unprecedented move he put the word out to eliminate it from all further screenings. One can only imagine the fan buzz that filtered out. Those who had scored precious tickets to the first few shows would have walked away with a unique experience. (Click here to view the original epilogue on YouTube.)

But this was not the end, of course. Nishizaki had always nursed the desire for at least one Yamato film to be shown in deluxe 70mm with 6-channel stereo, and when Final Yamato closed on April 29 he hauled it back into the shop for a tune-up. Many scenes were revised, others were enhanced, still others were added, and the epilogue was completely overhauled. This process added 12 minutes of screen time and resulted in a film that Nishizaki could finally be happy with. (The differences between the 35mm and 70mm versions are examined in detail here.)

Only one print was made of the new-and-improved Final Yamato, which was screened in just two limited engagements: November 1983 in Tokyo and February 1984 in Osaka. The limitation was decided by technical concerns; at the time, these were the only cities with theatres capable of fulfilling the 6-channel stereo requirement. Evidence is still unclear about whether or not it was a 16X9 widescreen presentation. The 35mm version had been prepared for the standard 3X4 ratio of most Japanese movie screens, so the prospect of extending and refilming all of the artwork would have been impractical. Regardless, Nishizaki got his fondest wish and it wasn’t long at all before everyone would have a chance to see the final version of Final Yamato at home. 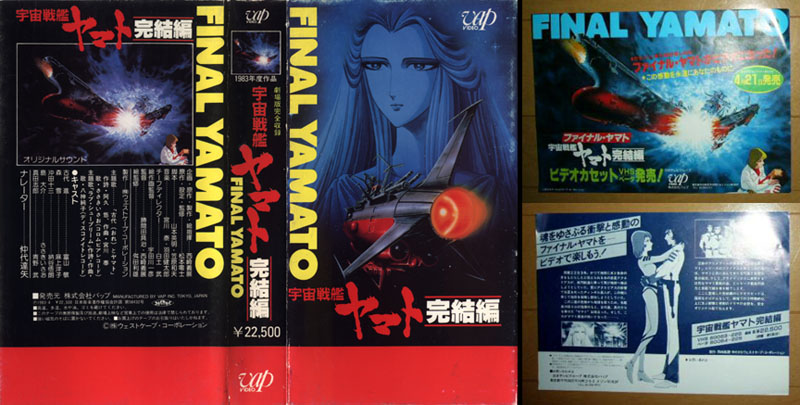 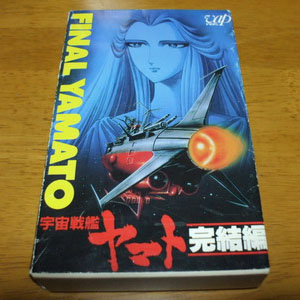 Among the many records set by Final Yamato are these two: it was (and still is) the longest animated film ever made, and its debut on home video actually happened a week before its first theatrical run came to an end. This edition was to be the only video release of the 35mm version, complete with its original epilogue. At 22,500 yen, it was also incredibly expensive even by the standards of Japan, where video software regularly retails at two or three times the standard US price. Highly sought-after by collectors today, it remains the only means of viewing the first version of the movie, warts and all. 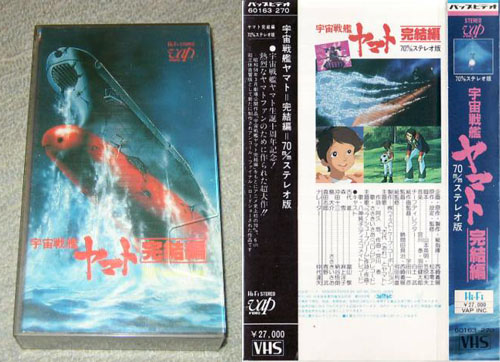 The first appearance of the 70mm version came after the February Osaka screenings. Also handled by VAP, it made special note of the enhanced and added scenes on the back of the sleeve. Whether or not the film was projected in widescreen, the video picture and all published stills were displayed in a 3X4 ratio. This was to remain the standard until recent years. Unlike the other Yamato movies, there was to be no video release from Toei. However, there were still multiple formats available from multiple companies all at the same time. 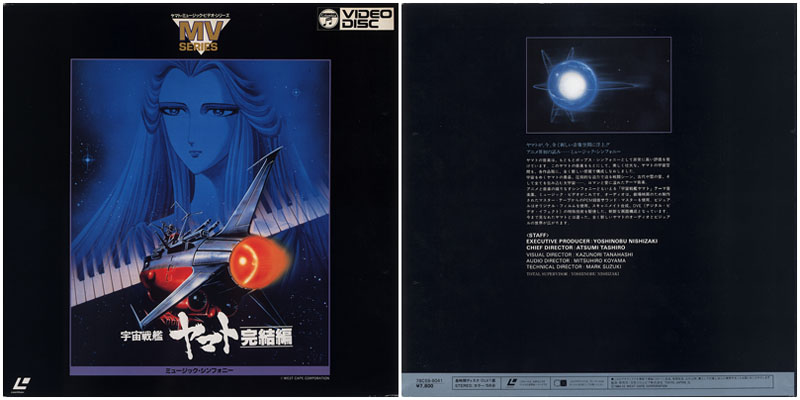 Nippon Columbia, long the home label for Yamato music, was the natural choice to release the MV series in 1984, an innovative set of programs that combined re-edited footage with symphonic scores. VHS and Beta editions were also made. Read more about the MV series here. 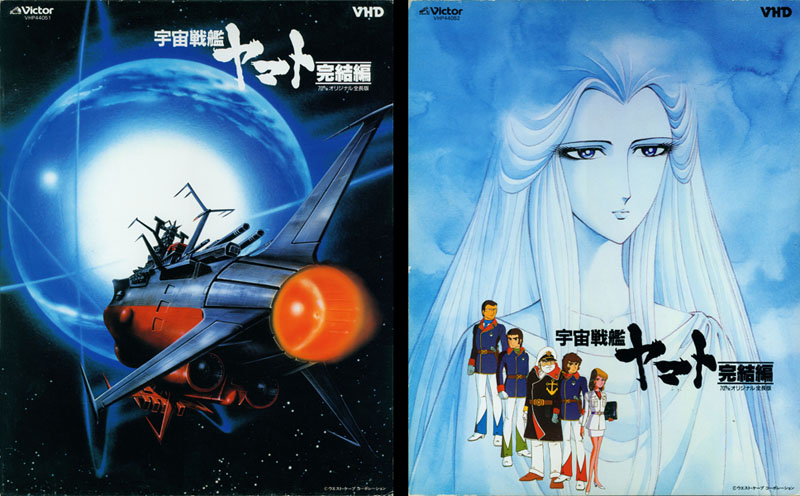 CC Victor was a holdout with the VHD format, even as it was being rendered obsolete by the laserdisc. VHD’s were more durable than tapes but still susceptible to the same sort of damage that could afflict LP records. Their packaging was more impressive, especially when a long-running movie was spread out over two discs. These discs and a set for The New Voyage were Yamato‘s last dalliance with VHD. 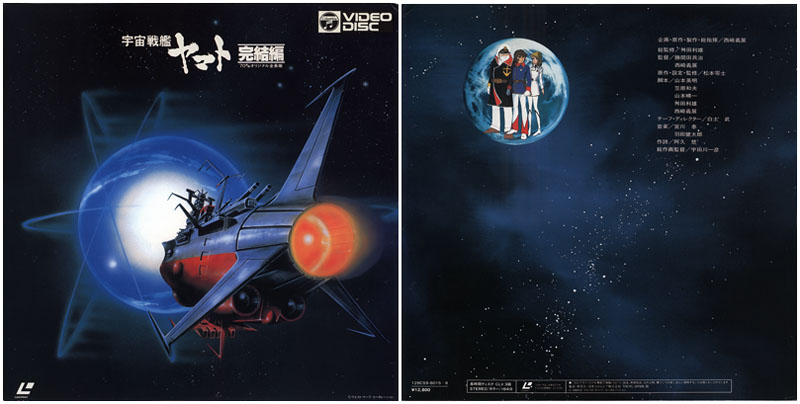 A year after the MVs made their debut, Nippon Columbia followed up with their own handsome edition of Final Yamato on LD. Outer sleeve shown above, inner sleeve shown below. 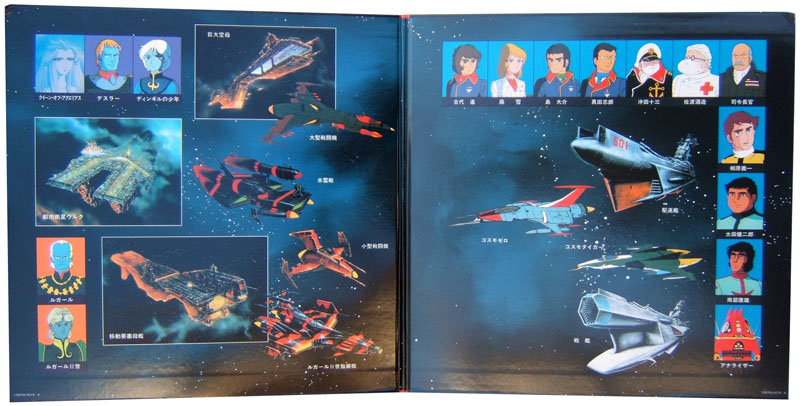 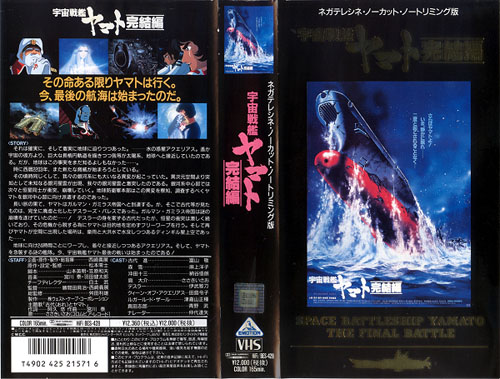 The entire Yamato video catalog found a permanent home with Bandai’s Emotion label in 1989 and got a repackaging on both of the now-standard formats. The LD was part of the first Yamato box set, called the “Perfect Collection.” Containing all five movies and a bonus disc of trailers and other artifacts (including the first version of the Final Yamato epilogue), it also provided a new English translation of the title, but The Final Battle was destined not to stick. The LD box and the VHS sleeve both featured gold-foil logos. 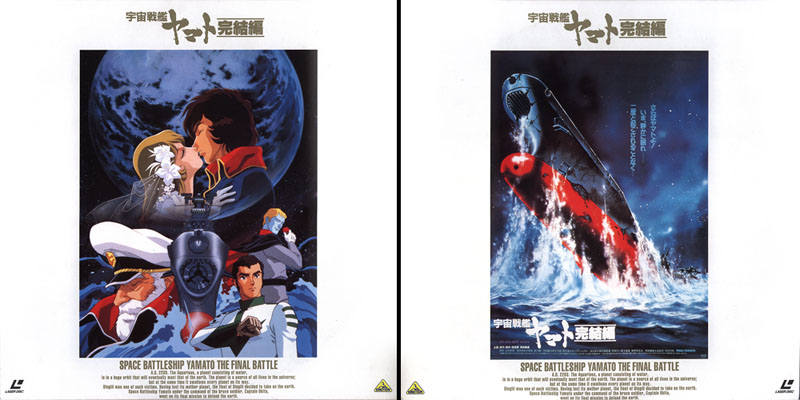 Since their first Yamato LDs were all limited to pricey box sets, Emotion addressed the need for individual releases in 1993, a year before Yamato‘s 20th anniversary. They sweetened the deal with stunning new jackets by anime designer Hiroyuki Kitazume (above) and extended liner notes on the inner sleeve (below). Also included were the theatrical trailer and the original epilogue. 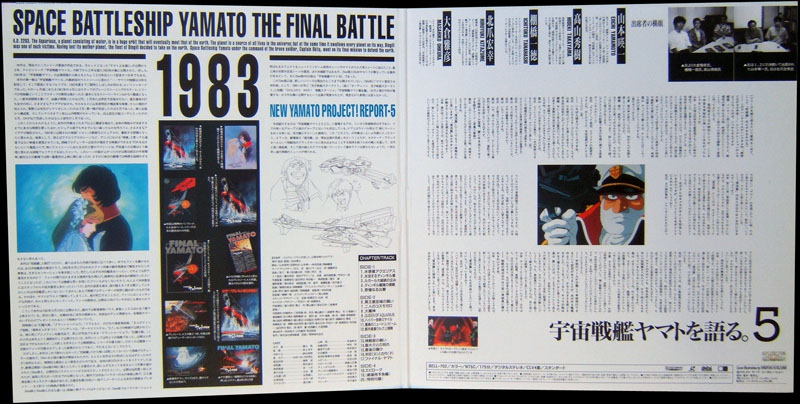 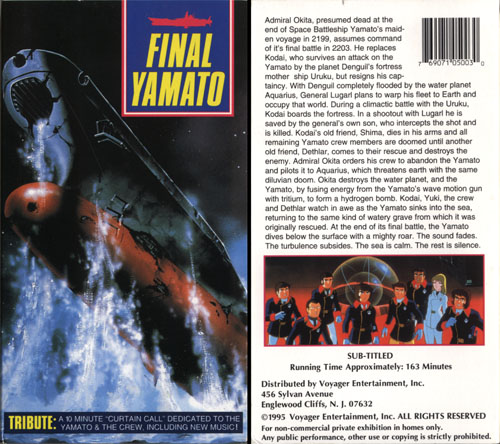 Final Yamato made its long-awaited US home video debut in August ’95, along with all of the other films and the three Star Blazers TV series. This release included only the later version of the epilogue, billed as a 10 minute ‘curtain call.’ 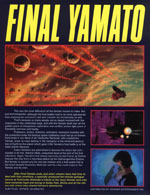 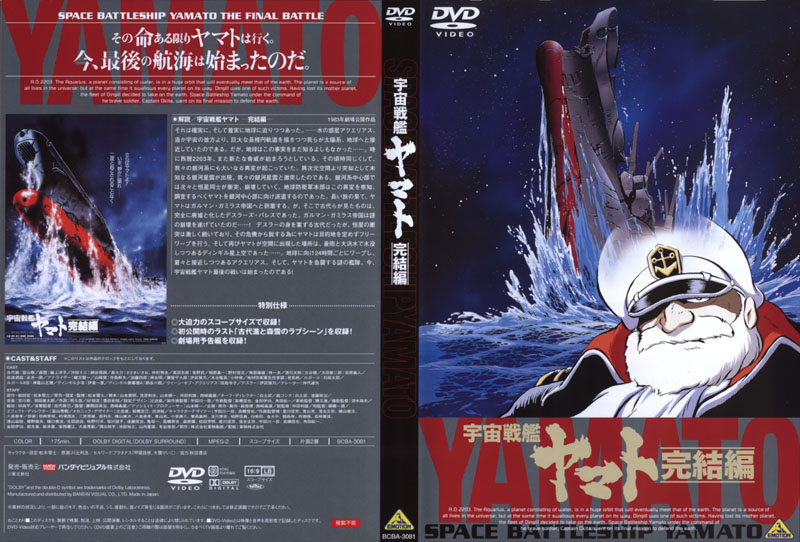 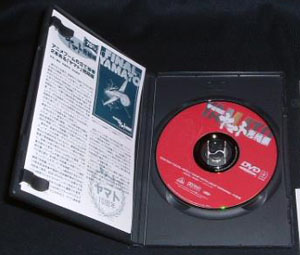 The new era of Yamato home video began here, with the first DVD release of all five movies, each of which came with an insert filled with historical liner notes. This was also the first time Final Yamato was released in a letterboxed edition, perhaps to duplicate the widescreen 70mm effect, but in this case the letterboxing was artificial, with the image cut off at the top and bottom (see frame comparison below). From this point forward, a full-frame version would no longer be manufactured in Japan.

Emotion teamed up with Asian distributor PW to release all five movies in a box set. The region 3 edition of Final Yamato is highlighted above right. 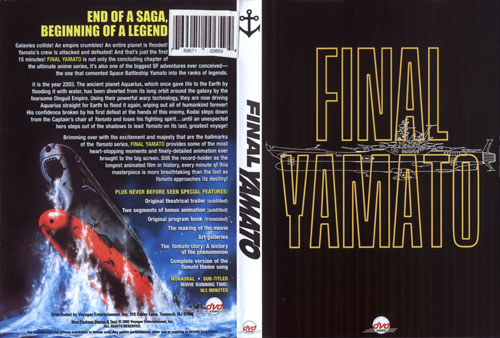 Voyager followed suit with its subtitled DVD release four years later, which included a host of extra features: the original theatrical trailer, a fully-translated video representation of the Japanese movie program book, an art gallery, historical material, and the original epilogue. A singular feature in this edition was the restoration of theme music over the end credits, which requires some explanation.

The 35mm release of Final Yamato included an updated version of the original TV theme titled Space Battleship Yamato ’83. It was a fully orchestral arrangement with a new vocal performance by Isao Sasaki. When the 70mm edition of Final Yamato was released, the song had been replaced by a standard-length TV theme played at low volume. Poorly timed to the end credit roll, it came and went leaving several minutes of silence as the names continued to climb the screen. Yet, for some reason, Yamato ’83 was still listed among the song credits. This odd deletion was corrected for the Voyager DVD, on which the song can be heard in all its glory, complete with subtitles which cover both verses. The movie is also part of Voyager’s “Yamato Collection” DVD box, released in March 2003. 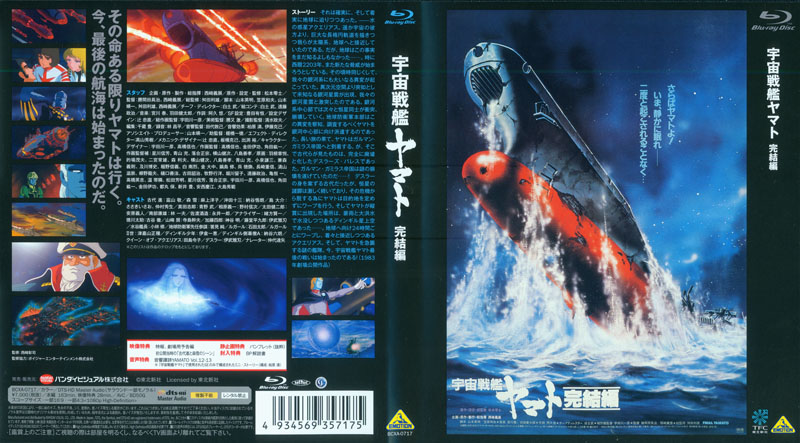 When the film finally came to Blu-ray, it got one more chance to fulfill its potential. It could have gone back to the original 3X4, but instead the DVD’s letterboxing was correctly reformatted for an HD screen. Scenes that felt cramped on DVD now feel wide open, so at long last Final Yamato feels like the epic it was always meant to be.

There is only one problem that remains unfixable – the video processing of certain special effects shots at lower-than-film resolution. They were always slightly blurry on home video, but now they stand out like a sore thumb. They could be easily recreated today by rebuilding effects on top of the original footage, but the fact that this wasn’t done probably means the film negative is unavailable.

Regardless, this is a huge improvement over the DVD and belongs in every fan’s collection. Bonus features include the original trailer, alternate ending, a digital version of the program book, and sound clips from the Yamato 2 LD box set. 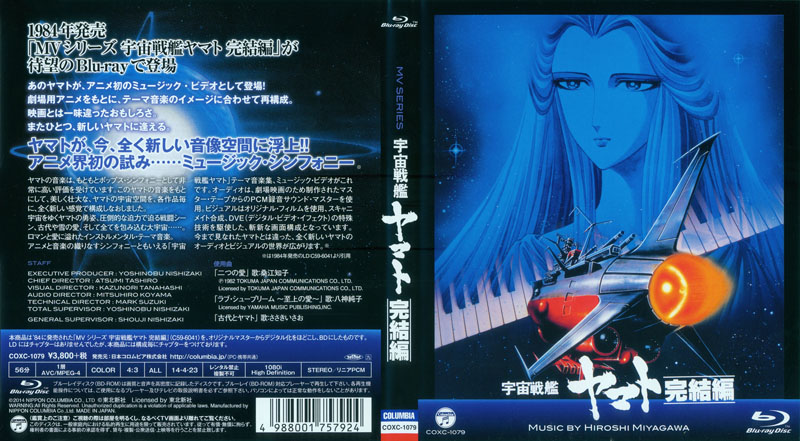