The 1977 premiere of the feature film was the pivotal flashpoint in Yamato‘s history, the moment when all doubt was erased literally overnight and it became the biggest blockbuster in Japanese cinema history. This new phenomenon was full of surprises. Never before had thousands of fans camped out overnight to see a “cartoon” on the big screen. Never before had a merchandising campaign taken off so swiftly that stores could not stock their shelves fast enough to meet the demand. And never before had a single record album so strongly seized the anime world as the one most closely associated with this movie.

Composer Hiroshi Miyagawa summed it up as well as anyone could have in his commentary from the film’s program book: 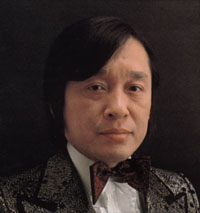 In every way, Yamato is the best of the Japanese animated films. I have participated in many projects, but none of my other works excited me as much. I was fascinated with the creation of producer Yoshinobu Nishizaki, and as a result I put all of my creative energy into the music. Usually, producers don’t get intimately involved in the specialty of each staff member, but he persistently requested detailed cooperation from all of us in order to accomplish what he envisioned, and I firmly believe that I completely met his expectation.

I now miss the time when the two of us kept up heated discussions even long after we looked like ghosts, and spent almost twenty hours recording the theme song. We had a toast in the early morning hours, swearing we would get through it. One usually does not have many chances to exceed himself in his lifetime, but Yamato taught me how to live as a man of passion. Those of you who are touched by the film will also learn this, whether you realize it or not. My words sound serious, but this work is, without a doubt, beyond reproach. I absolutely want to recommend Yamato not only to everyone in Japan, but all over the world as well.

The release of this album was the first signal that everything in the anime world was about to change. “Story” records for children were already well-established before Yamato came along, but never was one as hotly anticipated as this, especially in the days when TV reruns were scarce. Such reruns had created a groundswell of fans whose devotion only got stronger with the passage of time. In order to promote the forthcoming movie, Nippon Columbia released an EP with a drama track in early July and followed up with this LP later in the month. Both of these gave fans a chance to listen to parts of the score that hadn’t been released yet, and their response was thunderous. When the album had been conceived, Columbia’s expectations were practically nil. Suddenly, they had a monster hit on their hands. 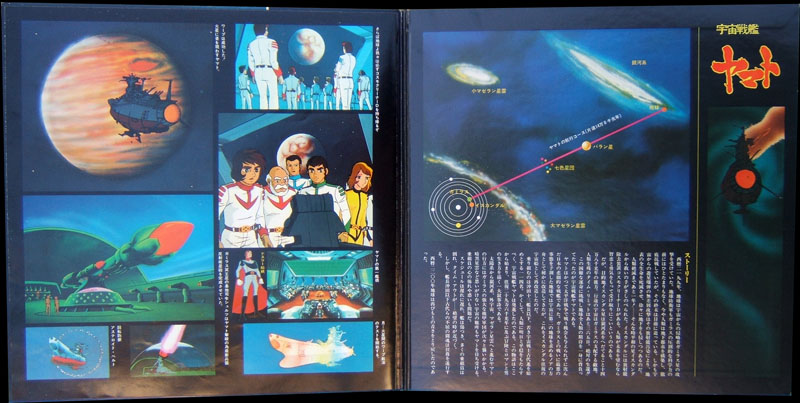 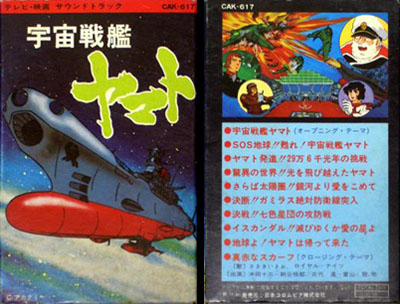 The LP provided an 47-minute version of the the TV series and was the first means of reliving the story on demand in audio form (unless you had the resources to get tape recordings from your TV). In its day, it was the equivalent of home video; many fans listened to it so often they could recite the lines. An even better bonus was a large collection of color stills, and when the movie finally did break it was the only major piece of merchandising on the shelves. Until it sold out, anyway.

The hastily-conceived cassette version (at right and below) included a foldout insert that recycled art from the earlier EPs, which probably counted against it when compared to the deluxe packaging of the LP. Fortunately, Nippon Columbia got the message and improved the production values of later cassettes to measure up to their LP counterparts. 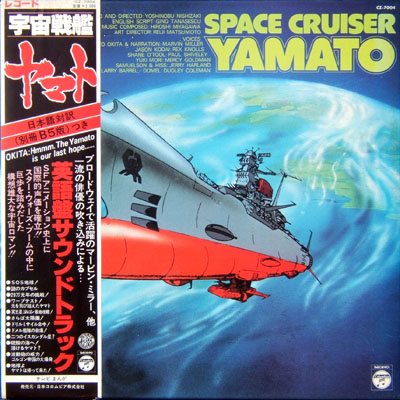 The next release was a real oddball, almost certainly meant to get something, anything else into stores while the iron was still hot. A substantially re-edited English-language version of the movie had been produced in 1976 and sold to overseas markets under the name Space Cruiser Yamato. (A full report on the making of that film can be read here.) Looking for a way to capitalize on the runaway success of their first Drama album, Nippon Columbia assembled this one from the English-language soundtrack and released it in a keepsake box that included a poster and a translated script book. It’s likely that many Japanese fans were underwhelmed, particularly those who still longed for an actual soundtrack album. Fortunately, the very next release would deliver what they wanted–and then some.

This album finally came to CD 35 years after its first release in the massive Yamato Sound Almanac series. Read all about the series and find liner notes here. 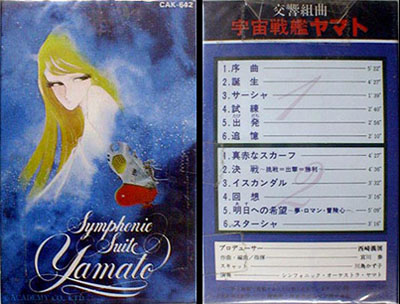 It was first heard on December 2, 1977 as part of the soundtrack to the 4-hour Space Battleship Yamato radio drama on All Night Nippon. Fans who had dissected every minute of the Drama LP must have been transfixed. Out of the blue, here were completely new versions of their favorite tracks, exquisitely rearranged to take full advantage of the world-class Symphonic Orchestra Yamato. The orchestra included some heavy hitters from the ranks of Japan’s best musicians such as violinist Shigeru Toyama and guitarist Yoshio Kimura, all of whom brought their ‘A’ game to the task.

A Yamato devotee couldn’t have asked for a better Christmas present when the album arrived on December 25th. Even now, over 30 years later, it towers over all competition. It begins with the majestic Overture featuring the famous vocal scat by Kazuko Kawashima, then explodes into the finest rendition of the Yamato Theme (titled Birth) that has ever been recorded. The third track, titled Sasha, was originally recorded with a longer prelude which was omitted to aid the flow of the album. Another highlight starts side 2 of the LP, a fast-paced samba arrangement of The Scarlet Scarf that instantly demonstrated the potential for fresh interpretation.

These arrangements would become the basis for many live performances in the coming years and set a standard not only for future Yamato productions but the entire artform of anime music.

The first taste of Symphonic Suite in live concert form came on a 1978 Columbia LP titled The World of Hiroshi Miyagawa, shown above left. (Read more about that album here.) Symphonic Suite was also one of the first three Yamato albums released on CD, along with the Farewell to Yamato symphonic album and the 1984 Grand Symphony. Columbia rolled it out on three separate occasions; twice in the packaging shown above center under two catalog numbers: 32C35-7529 (1985) and COCC-12227 (1995), then remastered for the Eternal Edition Premium box set (above right, 2004). Read all about this set here. 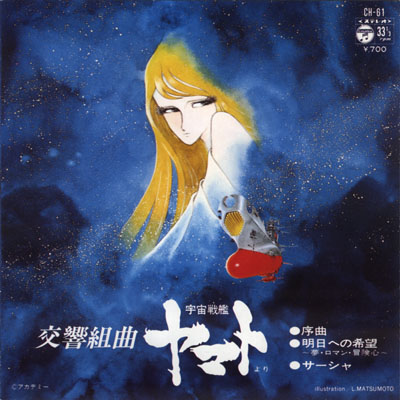 Anyone who still hadn’t caught the buzz three months later could sample the album from the three tracks on this single. A foldout insert with the EP reproduced liner notes from the album, which had included this charmingly humble commentary from Hiroshi Miyagawa:

When Producer Nishizaki called upon me to create Yamato‘s Symphonic Suite, I figured it would be a fairly challenging piece work, but it would also be a bewitching job for a composer. Three years had passed since I created the soundtrack for Space Battleship Yamato. I set my will on fire, and I wanted to create some new music with a deeper theme.

At times, Mr. Nishizaki would get extremely passionate about his views, which resulted in a positive experience for a musician whose views held a wide horizon. Since there are many new arrangements here, those that have the drama album may think these are somewhat incompatible, but I feel that if you listen closely, you can catch the deeper themes I have added, and I believe they’ll fit right in with the broader tone of Yamato music. I figure that once you listen to the opening, you’ll understand that this LP is reasonably priced.

A better word would have been ‘priceless.’

Also heard in the radio drama, a violin ballad opens this ‘image song’ with drama and atmosphere that invokes a sad, lovely woman. The B-side featured Starsha, the closing track from Symphonic Suite. 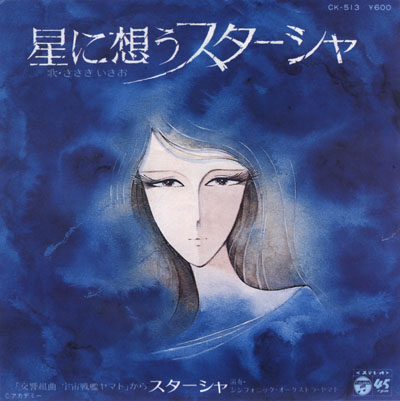 Starsha, Thoughts Among the Stars

Iscandar, the star is called
Goddess of love Starsha, Starsha
To the wandering people who suffer
You held out a gentle hand
If it may be allowed
I take that hand and draw it toward me

Iscandar, Iscandar, from the thought flows
Goddess of love Starsha, Starsha
Allured by the dream of peace
I remember a beloved heart
I hear a voice from distant heaven
I turn but my eye sees nothing 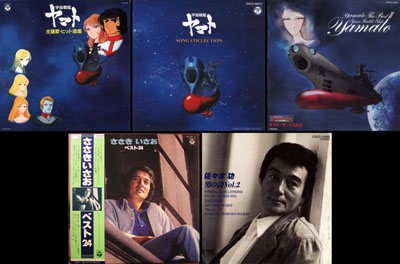 This song can be found on the following albums, shown at right:

(see other discographies for data) 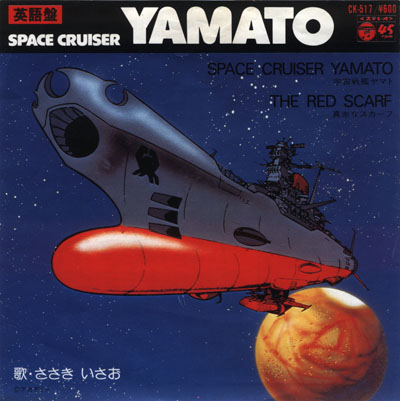 This product remains something of a curio, released in the wake of Farewell to Yamato when practically anything with the name Yamato on it was a guaranteed seller. Here, the OP and ED themes are sung phonetically in English by Isao Sasaki, maintaining the spirit of the original while rushing admirably through some obviously unfamiliar syllables. 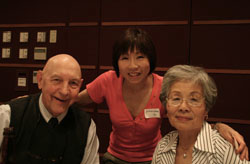 Lyricist Donald P. Berger evidently had a partnership with Sasaki at the time; he also wrote English versions of other songs which were collected on an all-English LP from Nippon Columbia titled Isao Sasaki Singing his Beloved Anime Hits. This album included an English version of the Space Pirate Captain Harlock theme, among others. (See a complete transcript of Berger/Sasaki collaborations here.)

Mr. Berger (1931-2014) enjoyed a rich career of his own, starting as a journalist of Asian music for the Japan Times in the late 1960s and later joining the faculty of the American School in Japan as a teacher, musician, and arranger. His specialty was the Shakuhachi flute. He is pictured here with his wife Kaori (far right), with whom he lived out his last years in Georgia.

It is time to go, we know
From the Earth that we love so
Man the cruiser which is called Yamato

It is time to go, we know
From the Earth that we love so
Man the cruiser which is called Yamato

Flying in the stars above
Fighting for the Earth we love
Speeding onward, roaring by
We will return by and by

But for now we must remain
We must fight, endure the pain
For the hopes of those we love
Are with Earth as we fly above

See the girl, she’s waving to you
The scarf, so bright and red
As you race into the blue
She is waving, waving to you

You’ll return, don’t have any fears
So sing a happy tune
Though the months turn into years
She’ll be waiting, waiting for you

These songs can be found on the following albums:
(see other discographies for data)

Continue to the Farewell to Yamato Discography 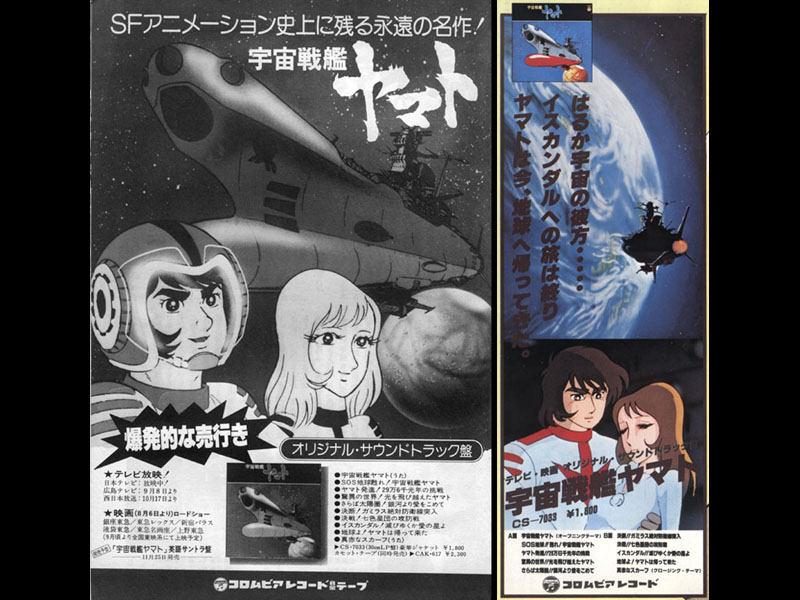 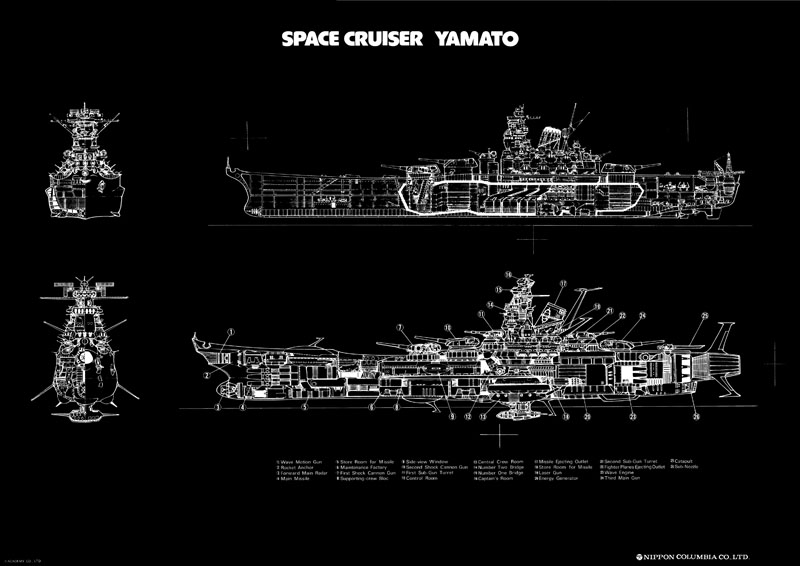