“Yamato is a story of overcoming adversity”

Chapter 2 of Yamato 2202 will premiere on Saturday, June 24. Prior to the screening of Chatper 1, Dengeki Hobbyweb interviewed both Writer Harutoshi Fukui and Director Nobuyoshi Habara, who told us their passionate thoughts about the work.

This time we focus on the voice actors who breathe life into the Yamato characters from the production team. Here we speak with Space Battleship Yamato‘s indispensable navigator, Kenichi Suzumura who performs Daisuke Shima, best friend to Susumu Kodai! Don’t miss the hot story you can read only here, such as the points of playing the role and the highlights of this new chapter!

Born September 12. Made his debut as Morley in the 1994 TV anime Macross 7. He has played a number of characters in Gintama (2008), Osomatsu-san (2015) and Re:CREATORS (2017). Also an admitted tokusatsu fan, he provides the voice of Ryutaro in Kamen Rider Den-O (2007). He is active in various genres in addition to anime. 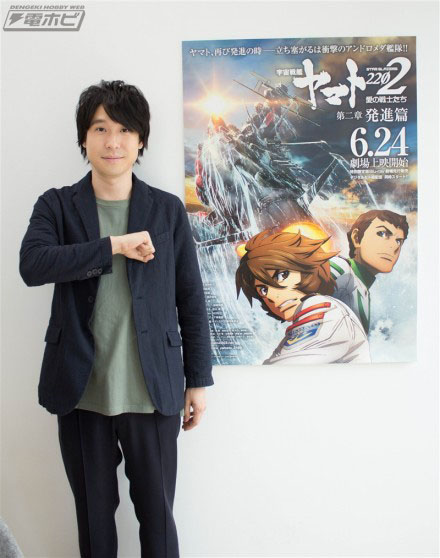 Hearing about production of the sequel to Yamato 2199

Interviewer: First, please tell us your impression upon learning that Yamato 2202, Soldiers of Love was going into production.

Suzumura: Finally! That was the feeling. (Laughs) From the moment Yamato 2199 was first screened, I thought a remake of Farewell to Yamato would be done, and Yamato lovers around me always asked, “When will the next one be done?” The feeling is that the story has finally materialized.

Yamato 2199 is a work that was supported by many fans. In this movement I met a lot of passionate fans who love Yamato. I believed that it was impossible not to create the sequel these people were waiting for. Personally, I thought it would be done a little earlier. I’ve been in this industry for many years, but even thought I think “I hope they can do it soon, don’t you?” I know things don’t proceed so easily, and it takes time to prepare for production. Still, I thought it could be done a little earlier, and I wanted to see a sequel myself, as soon as possible.

Interviewer: What was your impression after reading the script?

Suzumura: Since Daisuke Shima doesn’t appear in the first part of Yamato 2202 Chapter 1, when I saw the script for the first time I though, “was it restructured?” (Laughs) As I read, there was a trace of the original work Farewell in some scenes, and I was excited to read some of the added parts that had been arranged. With a new story beginning, it was an uplifting feeling that Yamato would start again.

Interviewer: What scenes made an impression on you in Chapters 1 and 2?

Suzumura: Yamato‘s launch scene, of course! The launch of Yamato wasn’t depicted in Chapter 1, but it was finally shown in Chapter 2, which was called Launch Chapter. That scene makes my heart pound! In all works, the departure of the hero is a hot moment and this Yamato is special, including the starting sequence. Those who saw Chapter 1 understand that it’s different from launching by pushing back as in Yamato 2199. Returning from the voyage to Iscandar, Earth became peaceful in 2202, and of course a change in the way of thinking was born on the Garmillas side. The launch is the backbone, and personally I am impressed. I want you to pay attention to that part.

Interviewer: The theme is clearly stated as “love” this time. Where do you feel “love”?

Suzumura: It hasn’t been revealed yet how you capture “love” in the present situation. Just as “love” has been set as the theme, I think “feeling” could be depicted to raise the voltage in the second half. When saying “love” it’s a “concept.” Personally, I believe “a way to overcome adversity” is more universal and sleeps at the core of Yamato. I think that’s the story Yamato depicts. Although it was Yamato that saved Earth, this time its launch is not blessed. From the beginning, this Yamato is a “journey of overcoming adversity.” It’s going to get hot! 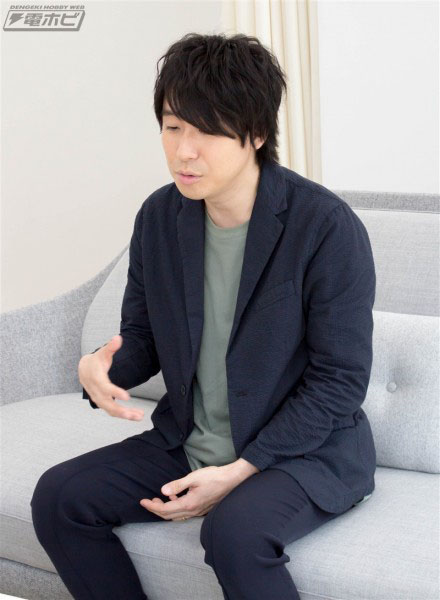 How is Daisuke Shima three years after 2199?

Interviewer: Three years have passed in the story this time. Is there any change in the performance?

Suzumura: Talking about the results, I think there is a change in the acting, though it’s not intentional. Since the script is tightly written, it’s possible to naturally express the growth of Shima without making conscious changes. This Shima has become so dignified that there is no comparison with Chapter 1 of Yamato 2199. I think the change with him is more obvious than with Kodai.

Shima went through a lot of “adversity” on the trip to Iscandar. His bond with Kodai is deeper, too. With a mission to ride on Yamato, I come to have a firm awareness as the chief navigator. However, the part in which Shima dramatically matured is not depicted at all. I think this is an interesting part of Yamato. The character of Shima grew naturally without having to force it into the story. I think it’s an excellent ensemble drama where they grow up naturally.

Therefore, if I perform a script obediently, it seems that Shima has grown up without a doubt. In that sense, I thought, “Shima has become an adult” and there’s no part I have to perform forcibly. Compared to 2199, I think I have to just honor this Shima, since it’s a point that weight and responsibility certainly come out in his words.

It’s symbolic, the scene in Chapter 1 where he stops Kodai. We’re going to need help from beyond the universe! When Kodai goes overboard, I bring in some reality and say, “Isn’t this story absurd?” And I persuade him by saying, “Please think rationally for Yuki’s sake.” I can say such things to him because of our deep relationship.

For example, in real society, when your friend says, “I’m going to quit this company and start my own business,” you can’t quite say, “Stop!” You can tactfully say, “Yes, well…good luck with that.” I think it’s hard to just say “Stop” if the relationship can’t be considered close. This is difficult, isn’t it? Then I make the choice to get on board Yamato with Kodai. In this way, there are no scenes in 2202 where you can’t perform it without a sense of responsibility.

In addition, Shima doesn’t do a lot of double-talk. He conveys things to Kodai directly. When it’s awkward, he holds his tongue. Shima tends to look up, and I think there are a lot of scenes where he’s pondering something silently. There’s something he wants to say, but is holding back. Conversely, it seems like he speaks only when something really needs to be said. That’s particularly true of Shima in 2202.

I have to say, he is beginning to understand how words have influence, and the feeling is that he has a deep understanding of becoming an adult. In that way, moreso than in 2199, I think each word should have a sense of responsibility. To that end, it has been clearly decided “what you say to whom” and you must say the line carefully. In that department, I’m more mindful of my performance than I was in 2199. 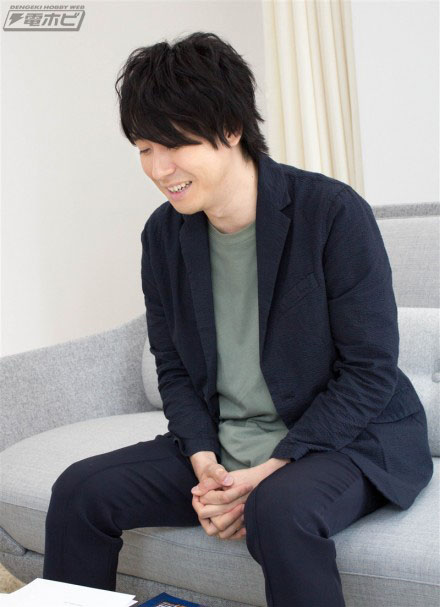 At the voice recording site

Interviewer: Have you gotten any performance instructions from Director Habara or the staff during voice recording?

Suzumura: No, not at all. (Laughs) Not for the moment with 2202, as least as far as I’m concerned. As I mentioned earlier, it’s a script that is really easy to perform. It may be because I’m acting naturally without any trouble. If you read the script, everything is written accurately, and I think it’s the actor’s job to read and understand the script well. Ultimately, I think it takes an original actor not to make a director or sound director say, “We want you to do it this way.” I try to understand and perform the script properly. However, it can become uneasy if nothing is said. (Laughs) I’d like them to say a little, but if nobody talks about it I understand that it’s good.

Interviewer: Is that because everyone on the staff trusts you?

Suzumura: I talked with Director Habara and Mr. Fukui once before, and they both seem to trust those who took the baton from Yamato 2199. When I saw 2199, the personality of the characters was interesting, and I think this performance matches it. I you believe in it and you perform it, they have nothing to say. That means they trust us very much, and conversely I think that I mustn’t betray that trust.

Differences with Farewell to Yamato

Interviewer: What is your impression of the new character, Klaus Keyman?

Suzumura: He seems to be both an enemy and an ally, but at present he’s completely mysterious. It’s written so that you don’t know yet, and I think it will be naturally understood as the story progresses. Nevertheless, you can see that it’s being done with intent, and I think he has surely become a “key man” for Yamato. At present I don’t know what kind of character he is, but it’s very interesting that the mystery character is played by Hiroshi Kamiya. A mysterious part is fitting for him, and I think it’s good casting because he always performs with tension as if “there’s something behind the scenes.” He’s a character who didn’t appear in the original, so I don’t know what actions he will take. I think it’s a good person to bring some mystery to this work. Moreover, since you can’t leave such a good character as is, I’m looking forward to seeing where he’s heading.

Interviewer: Are there are parts that are uneasy to perform due to the ending of Farewell to Yamato?

Suzumura: I’m not in a position to know how the story will end, but I’m willing to accept whatever ending will come. I’m an actor, so I concentrate on how to perform and I’m not at all worried. But to put it simply…when I watch it as a fan, I’m intensely interested. (Laughs) It’s the same story about the fight against Gatlantis, but the fate of Yamato and Shima vary greatly depending on whether it branches toward the movie version or the TV version. I’m looking forward to finding out, “what are you going to do here, Mr. Fukui?”

Interviewer: Finally, a message for the fans, please.

Suzumura: Yamato finally launches. The story started with Chapter 1, but I don’t think it’s an exaggeration to say Chapter 2 is the real beginning. It’s customary for the hero to appear in Chapter 1, but it was brave not to start out until Chapter 2, and I think you can understand how carefully this story is being made. In producing 2202, everyone on the staff including the director is confronted with various forms of “adversity.” Please look forward to seeing how everyone will overcome it. If you’re satisfied even a little after watching Chapter 1 and Chapter 2, it’s proof of how hard everyone worked, so thank you for your support. I hope we can get through this long voyage together as the crew of Yamato.