The year got off to an explosive start with the late January release of Chapter 4 in theaters and all the excitement that lead up to it, which included music releases, live events and a big wave of media coverage. Here’s everything that happened during and after the countdown to launch… 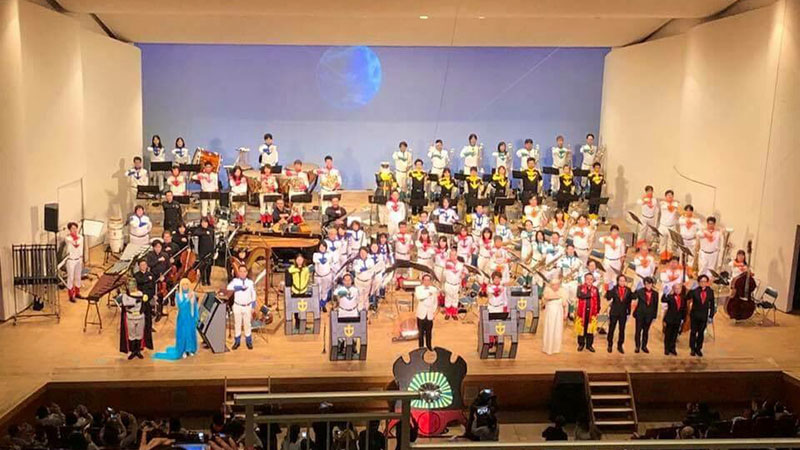 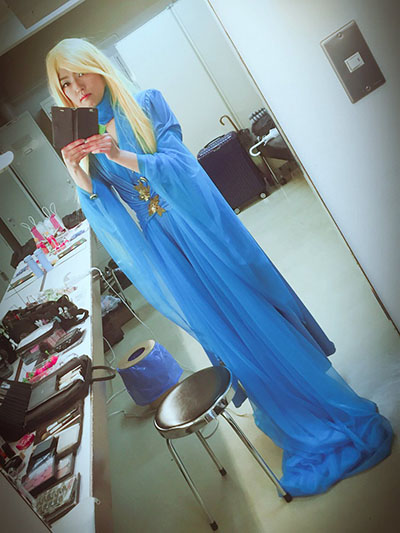 This is the first time the Aloha Band has made it into a report, but NOT the first time they’ve crossed paths with Yamato. Their January 8 concert in Nishinomiya included an encore performance of Yamato themes they previously performed in 2013. Back then, they fully committed themselves with Yamato cosplay and on-stage antics involving a sinister-looking Dessler. (See clips of the 2013 performance on Youtube here and here.)

The 2018 performance pushed things up a notch with onstage props straight from Yamato’s bridge and a vocalist in Starsha cosplay. Both of these photos were posted on Twitter by “Starsha” herself.

The setlist consisted of two extended medleys derived from the first and second halves of the original story with updated selections from Yamato 2199. 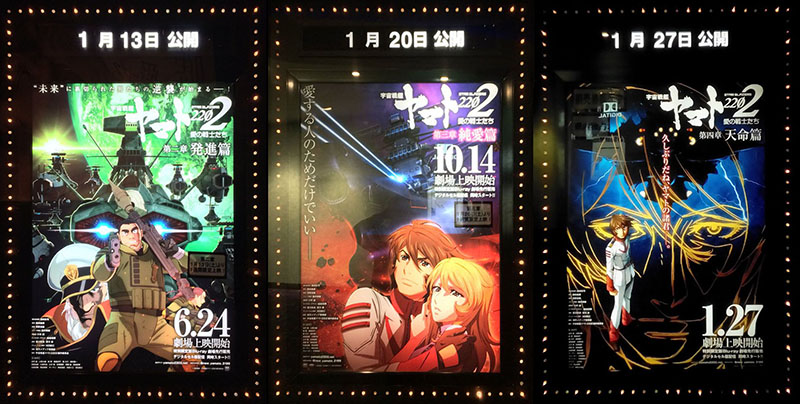 The audience for Yamato 2202 is increasing, based on the simple evidence that more theaters are jumping on board as the series progresses. One contributing factor is periodic revivals of previous chapters. These photos were posted on Twitter by S Meijin at the Aeon Cinema in Niigata. There, Chapter 2 reappeared on the 13th, Chapter 3 on the 20th, and Chapter 4 on the 27th. Presumably, Chapter 1 could be seen there on the 6th. In other words, one a week leading up to the new chapter. 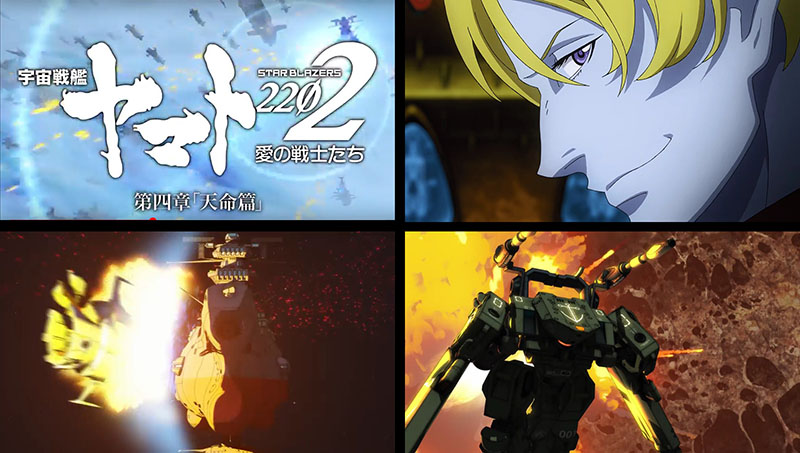 The final 2-minute trailer for Chapter 4 was a whirlwind of images that tested the limits of perception and revealed an enormous amount of content that demanded multiple viewings. See it on Youtube here.

The Yamato theme heard in this trailer was another thing that jumped out at longtime fans: a newly-recorded version by the one and only Isao Sasaki. The following comment from Sasaki himself made its way through online media:

“This time, I was asked to sing the Yamato theme with a feeling that I was singing it for the first time. It could be because of my age, but the thought was that it was a little too refined when I sang it for Yamato 2199. The story of this Yamato isn’t fully known yet, but the image of the work is definitely heavier. I thought about how I wanted to break through that, but I didn’t want to recreate it from scratch. A few new instruments were added to the original music, and the tempo is considerably faster. You could say it’s a little rough this time, and when I sang it I kept in mind the heroism of, ‘I’ll go on a journey and confront someone’!”

It was not announced yet, but when the opening theme kicked off Chapter 4 in theaters, it featured the second verse for the first time in Yamato history. 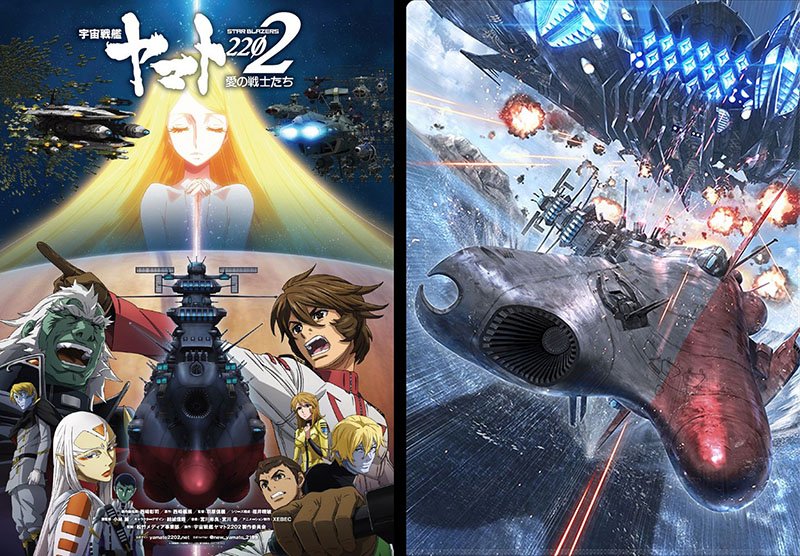 On this day, along with the trailer, it was announced that advance tickets for Chapter 5 (to be released May 25th) would be sold in theaters on opening day of Chapter 4. Two limited-edition items would be offered as bonuses: a poster (above left) and a clear file (above right), both featuring brand new key art.

See larger versions of both images at the end of this report. 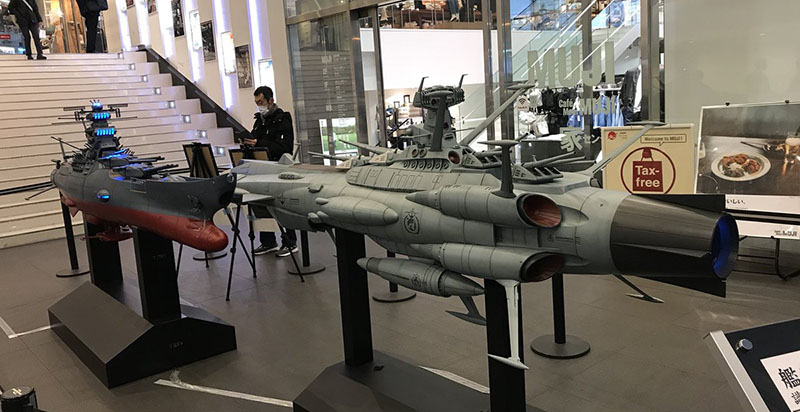 For only the second time, the gigantic 3-meter display models of Yamato and Andromeda came together for another pass, this time in the lower lobby of the Shinjuku Piccadilly Theater in Tokyo. As usual, fans swarmed in and posted numerous photos on Twitter. 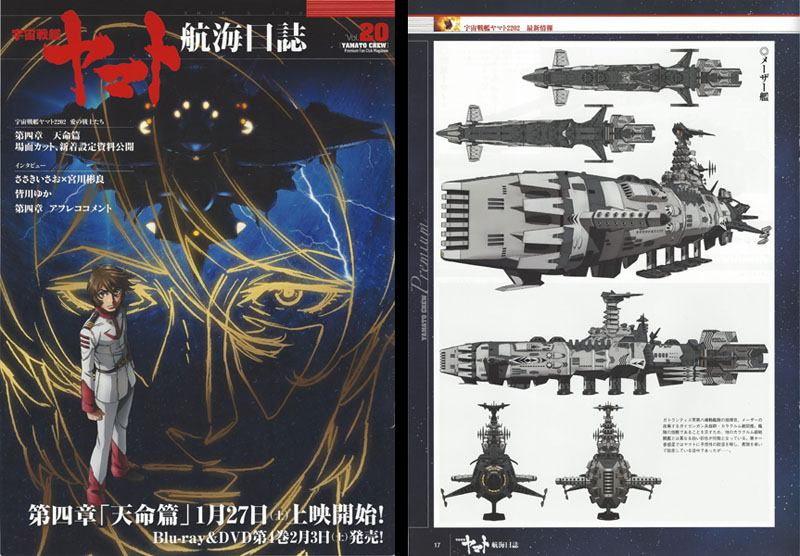 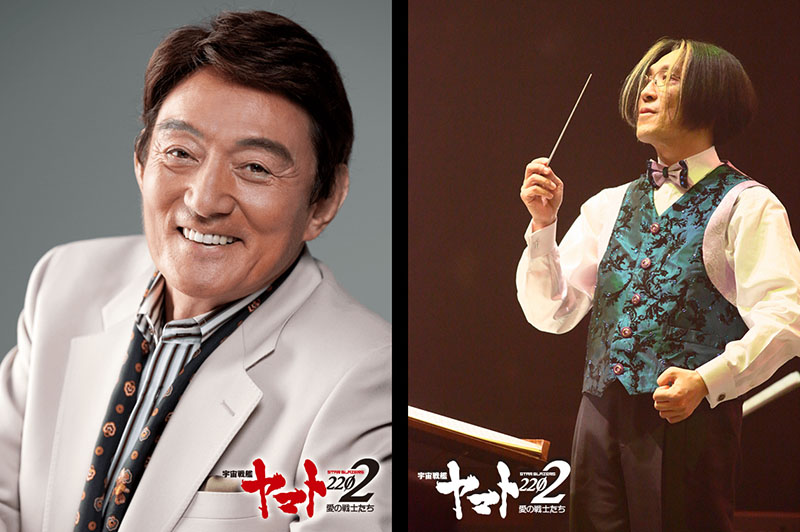 With Isao Sasaki now riding on Yamato’s cutting edge again, the official 2202 website published a new interview with him and Composer Akira Miyagawa. 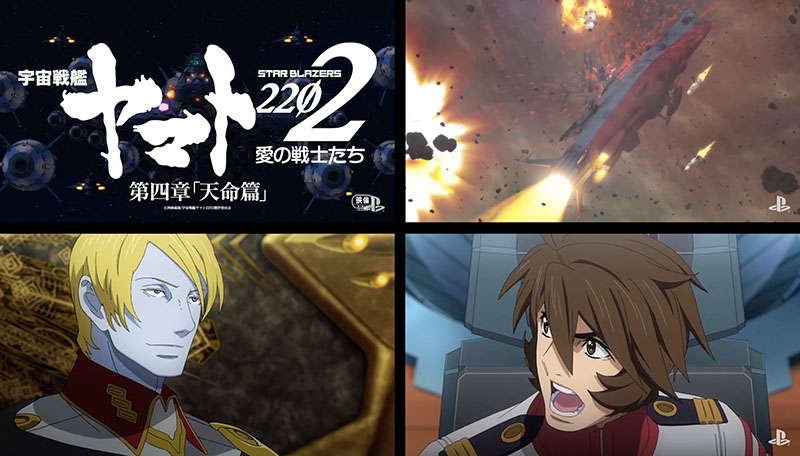 Whenever a new chapter of 2202 is released in theaters, it is simultaneously offered through multiple streaming services, including the Playstation network. Thus, Playstation created its own trailer for Chapter 4 with additional footage. 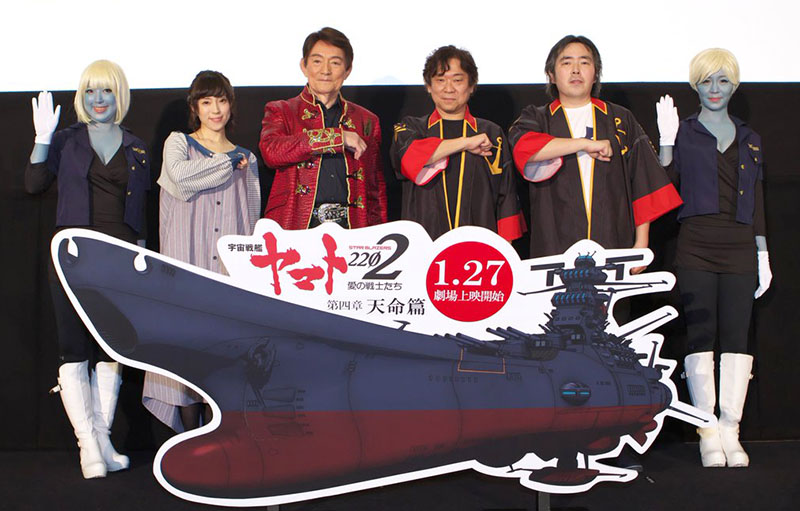 Most would simply call this an advance screening, but the term “teach-in” was applied instead. The “teach-in” portion was a presentation meant to get everyone up to speed on their history and the latest news. Either way, it was the first full-up showing of Chapter 4 with several guests in attendance, including a genuine Yamato superstar. Multiple media sources picked up the story as follows… 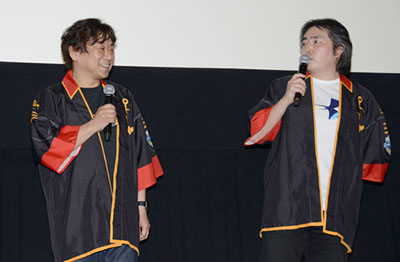 In accordance with “destiny,” Isao Sasaki looks back with passion at recording Space Battleship Yamato with Hiroshi Miyagawa

A preview screening of Yamato 2202 Chapter 4, Destiny Chapter, was held at the Shinjuku Piccadilly Theater in Tokyo on January 18. Actor Eriko Nakamura, Director Nobuyoshi Habara, Writer Harutoshi Fukui, and Singer Isao Sasaki all appeared on stage. It had been three months since the premiere of Chapter 3 in October 2017. Ms. Nakamura asked Mr. Fukui what he knew about the film’s reputation.

“Only three months have passed,” Mr. Fukui said, “And because I’ve been making a whole new movie I had no time to look at the reputation around us.”

Mr. Habara said, “I could only do my best with what we’ve just finished making.” 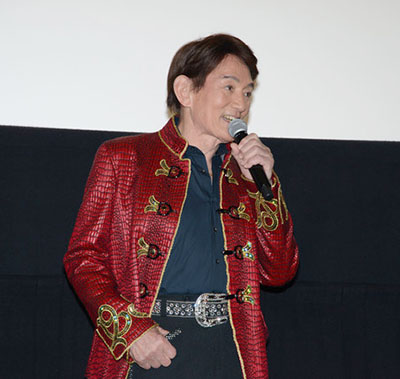 Asked about the title “Destiny Chapter,” Fukui explained, “Teresa, who is in a position close to godhood, comes out to the forefront. Kodai is cornered, and has the feeling that his fate was handed down from heaven. But ‘Surging Wave Chapter’ might also have worked as a title. It is non-stop fighting.”

Sasaki looked back on the recording of Yamato 2202 with a smile. “The orchestra members all seemed to be having fun, too. Some of them watched Yamato when they were children.” He also remembered recording the original version. “The composer Hiroshi Miyagawa told me, ‘No matter what the producer and director say, do what I say! Sing energetically!’”

Mr. Habara said he’d wanted to appoint Sasaki as a theme singer from the beginning, and now, “My wish has come true.”

Sasaki responded, “Yamato is destiny for me. I’ve been involved with it for most of my life.” 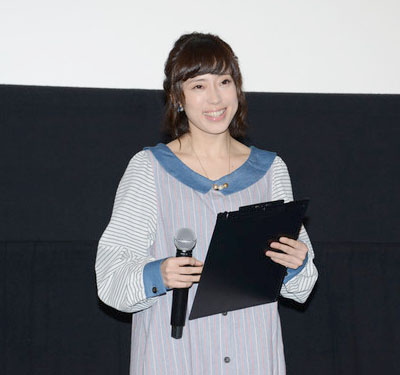 The latest work of Yamato 2202, Chapter 4 Destiny Chapter had a preview screening on the 18th at the Shinjuku Piccadilly Theater in Tokyo. Series Writer Harutoshi Fukui appeared to discuss the much-talked-about return of the popular character Dessler.

“The title could have been ‘Surging Wave Chapter’ since it has non-stop fighting,” he revealed. “Dessler appears and Susumu Kodai is driven into a corner by the Wave-Motion Gun problem. How do the various characters get past their destiny? That’s what it’s about.”

Two Garmillas girls appeared in blond hair and low-cut costumes, their faces painted blue. They presented a bouquet of flowers to Isao Sasaki, who sang the theme song for Chapter 4.

“Isn’t it strange to get a present from Garmillas?” he asked with a smile. It was explained in brief that in Yamato now, Earth and Garmillas have a cordial relationship. 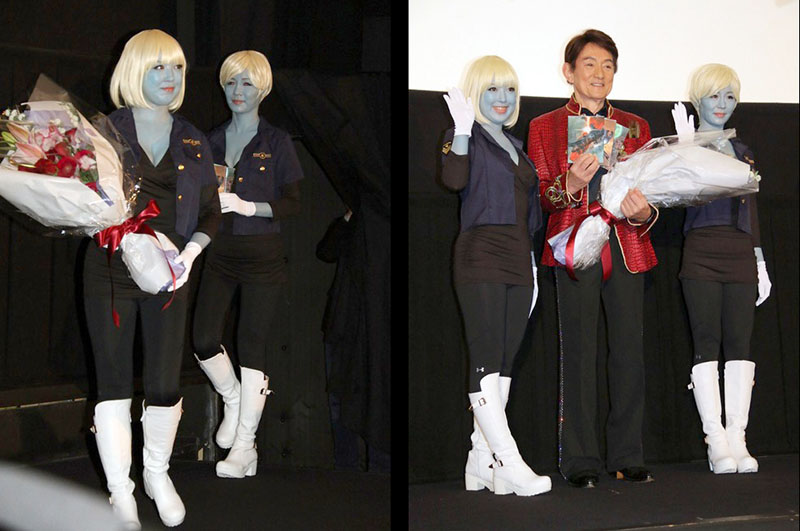 An advance screening of Yamato 2202 Chapter 4 took place on January 18 at the Shinjuku Piccadilly Theater. Before the screening, a stage greeting took place with the Director Nobuyoshi Habara, Series Writer Harutoshi Fukui, Opening theme song singer Isao Sasaki, and Mikage Kiryu’s voice actor Eriko Nakamura, who doubled as the MC. The lavish event included a live performance of the song by Isao Sasaki. 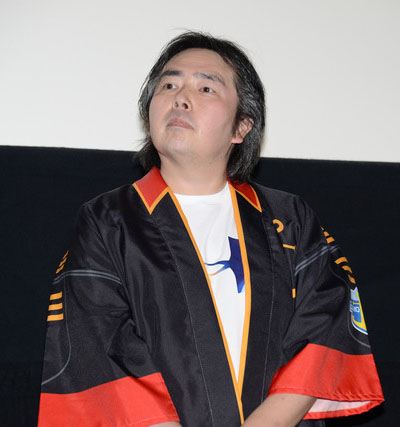 In spite of it being a weeknight, the theater was filled with over 500 Yamato fans. Ms. Nakamura appeared before the screening and livened up the venue with skillful rhetoric, welcoming on stage the perennial guests Habara and Fukui, both wearing happis, and the stage greeting started. Fukui was asked about the meaning of Chapter 4’s subtitle, Destiny Chapter.

“Teresa, who has a godlike existence, appears in full this time. Along with that, Kodai has to face problems with Dessler and the Wave-Motion Gun, and it’s about how various characters get past their destiny.”

He also talked about severe developments in this chapter. “It’s called Destiny Chapter, but it could also have been ‘Surging Wave Chapter’ since it has non-stop fighting.”

The guest everyone had been waiting for finally appeared…Isao Sasaki, a living legend of the anison world walked on stage dressed in a gorgeous costume. The venue was filled with great applause. The atmosphere in the theater instantly turned festive.

Ms. Nakamura said, “I never thought I would be able to meet such a shining person here on Earth…” 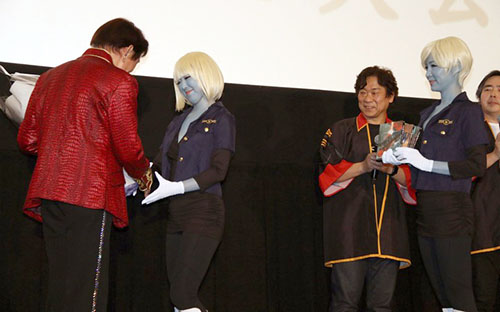 Two Garmillas girls also appeared, presenting Sasaki with a celebratory bouquet and Blu-ray set. Though he was delighted, he expressed some confusion about receiving a present from Garmillas, who should be the enemy.

Mr. Fukui explained, “I’ve carelessly destroyed the old Yamato. (Laughs) In this flow, Garmillas and Earth have become friends.” With this, the theater filled with laughter.

Mr. Sasaki was asked about the newly-recorded theme song for Chapter 4. 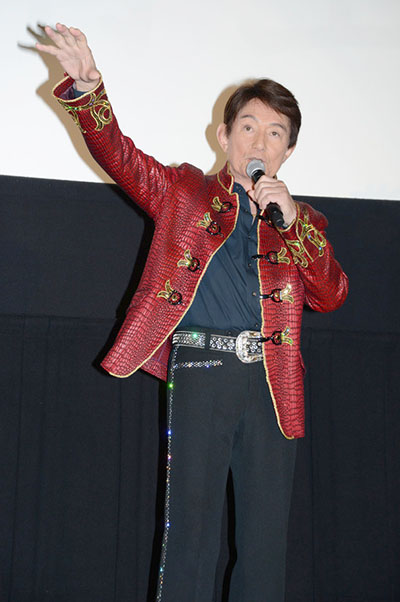 “It was a simultaneous recording with a full orchestra,” he answered happily. “Because there were a lot of people who like Yamato, everyone did it with a smile and it was fun. Some of them had watched it as children and became fans, so it was wonderful that we could perform it together after all these decades.”

“The tempo was faster this time,” he continued. “I reminded me of the first recording, where Mr. Miyagawa told me to sing energetically. I did it well. It has the image of Yamato advancing through space.”

Mr. Sasaki shared a moment from the memorial performance for Hiroshi Miyagawa, as if the maestro had possessed the conductor, his son Akira. Sasaki felt then the power of Yamato connecting two generations.

Isao Sasaki sings live and the venue gets excited!

Talking about presenting the Yamato theme live here, Sasaki said, “I’ve been involved with it for most of my life, so it’s something like destiny for me.” 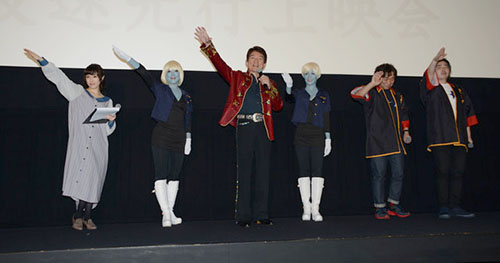 He shouted, “Yamato, launch!” The familiar melody flowed and hands clapped in time with the beat. Smiles overflowed from the fans as the majestic form of Mr. Sasaki expressed the song powerfully with his beautiful voice. He finished singing and smiled with his whole face. (See video footage of his performance here, starting at 18:42.)

Thunderous applause filled the theater for a bit, and then voices of admiration rose from Mr. Habara and Mr. Fukui.

Director Habara closed the stage greeting with a message to the fans who were about to see the new chapter. “I poured all of my energy into this, so I think you’ll enjoy it. It will be shown for four weeks in some theaters this time, so I’ll be very happy if you can see it two or three times.”

Above right: both of the “Garmillas Girls” posted on Twitter from backstage. Visit their Twitter pages here and here.