Translated from the 1998 Railway of Fantasy Concert Program

by Tim Eldred and Michiko Ito 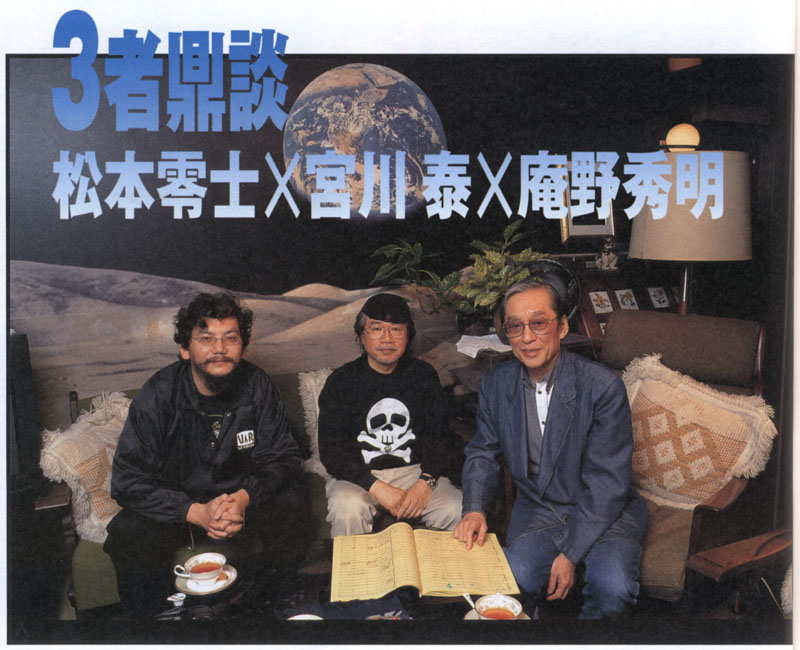 For Leiji Matsumoto (center), Space Battleship Yamato was the monumental work that helped him to realize his dream of bringing his manga to life as anime. Hideaki Anno (at left), the director of both Nadia and Evangelion, saw Yamato as a junior high school student and was inspired to make some thunder of his own. The masterpiece of Maestro Hiroshi Miyagawa (at right) was the soundtrack to Yamato, a treasure of Japanese music which started a revolution of its own. All three of them took the opportunity to talk with us.

Matsumoto: Anno, how old were you at the time of Yamato?

Anno: I was in secondary school.

Anno: Before that I read Mr. Matsumoto’s Battlefield manga series, and I also liked Wadachi. I was hanging out in my neighborhood browsing through an issue of Adventure King when I saw the announcement for the first episode: “New series, Space Battleship Yamato.” The title caught my fascination immediately. In our house we had one TV and the rest of my family wanted to watch Heidi, but I wanted Yamato. That was how it first pulled me in and got me devoted. These days we call it a ‘hammer.’ I think that was the first work to give me such an experience. 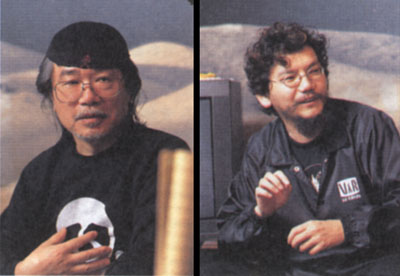 Matsumoto: Well, one of the few people who was in our audience! Our ratings were close to zero.

Anno: I went out and prosyletized for it. I told all my schoolmates, “watch Yamato!” They could always catch Heidi in reruns. Or maybe not. (Laughter)

Matsumoto: We’re grateful for that.

Anno: If not for that, I don’t think I’d be doing my job now. That’s for sure. I recorded episodes on cassette then, because there were no VCRs, so I think Miyagawa-sensei’s music was the only kind I listened to. (Laughter)

Yamato was an epic. It made us feel like we were seeing adult anime for the first time. It wasn’t directed at children. The music was very adult, too. Of course, it had a huge visual impact, but since I was in the generation that listened to Yamato on tape, it’s what gave me an ear for music. By the virtue of those two things, that’s why I’m here now.

Matsumoto: An eighth-grader, about 14 years old. That was the first age where you could really get into it. That’s how it was with my generation, too, but we drifted away when it didn’t suit us anymore. Yours is the generation that was assimilated into the screen.

Anno: The influence of Captain Okita was very big. Goro Naya’s voice telling us to overcome our fears and believe in tomorrow. I said, “Yes! That’s it!” (Laughter) 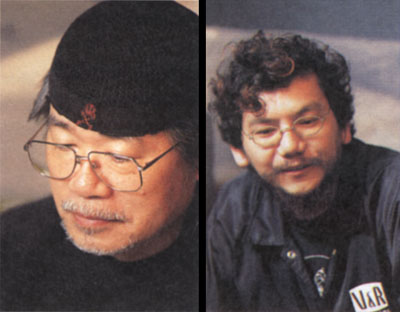 My view of life and the way I think about things was surely influenced by that.

Matsumoto: I drew the storyboards by myself for the first 13 episodes. I started with the script and turned it about 180 degrees when I transformed it into pictures. I adjusted the length and timing of some it, I changed a lot. The office was OK with that, since I wasn’t a bad writer, but it was hard for [Scriptwriter] Keisuke Fujikawa to take. That’s naturally what happens when one draws a storyboard all alone. I’m unpredictable even to myself.

Anyway, it was my first animation job. It was pretty hard. Honestly, I wasn’t concerned about the ratings. I brought it up, but I don’t mind it particularly.

Anno: It had a lot of energy. The work of [Animation Director] Noboru Ishiguro was very good.

Matsumoto: We’re the same age. We were about 36 then. The main staff was generally about that age. That was the generation that wouldn’t go down without a fight. We’d have shouting matches or turn a deaf ear and kick up a big fuss about things and stay up all night.

Anno: Ishiguro once asked me if I was over 30. I said I was already 32, and he said “you’ve got three more years. You’ll do the best work of your life at 35.” That’s about how old he was when he made Yamato, so it’s true.

Matsumoto: That’s the age your true personality comes out, 35 or 36. Until then, you’re wearing borrowed clothes. The true character of a man awakens at about 34, 35 or 36. That’s when you fully digest your own experience and find meaning in it.

Miyagawa: I was exactly 40 in the Yamato days. Maybe I slept in and got a late start, eh? [Laughter] I had already worked with Mr. Nishizaki before then, so I knew what he wanted.

Matsumoto: I was young in those days. He hired me because I was passionate.

Miyagawa: When I was in charge of Yamato music I must have written several hundred pieces. About 60 or 70 tunes per story. That would add up to several hundred, wouldn’t it? It was all its own thing. I never chased after someone else’s trends or fashions—though occasionally there were things like the disco-style album—otherwise they would be too limiting for me.

Sometimes the pieces could resemble each other. The outer space scat theme, the Yamato Theme…the Series 1 music was the best, and Farewell was second best. It gradually descended from there. But it was rich in variety.

Matsumoto: The scat theme…I don’t know why that was on my mind, but I thought it was necessary. Something made me think of it. I remember being intensely convinced that there should be a scat in the scene where Starsha appears.

Miyagawa: I had the same feeling. Anyway, we didn’t have the money for a string section, so I couldn’t write for that. In the beginning I didn’t think I would get any help even if I did everything right. I used older-style melodies, regardless of what was in fashion. When the movie became such a big hit, I was very surprised.

Matsumoto: To tell the truth, it was my fantasy for Yamato to open the door for female characters like Starsha and Yuki. That’s the way it is for a man. We’ll always dream about women. If all women vanish someday, I’ll have to stop working.

Matsumoto: It’s a very powerful thing, a dream inspired by the feminine. It gives men a lust for life. To perservere through many hardships for the sake of a matchless beauty.

Anno: Like hearing the voice of Starsha and flying all the way to Iscandar? I’d go for her, but if it was some scruffy guy instead, I wouldn’t answer the call no matter how urgent. I wouldn’t believe him! (Laughter)

Matsumoto: Neither would I!

Anno: If there isn’t an incredibly beautiful woman at the end of the journey, there’s no use. I’d want to go just to meet the woman.

Matsumoto: We had discussions about the title. Yamato has this great space travel story, and we debated whether it should be called Space Battleship or just Spaceship. When it was decided, I thought we might lose the female characters, since they would soften the story. So I indulged my fantasy. I was a 36-year old man, the last embers of my youth were burning down. I channeled all of that thinking into that first drawing of Starsha.

Miyagawa: When it comes time to prepare for a concert, there’s usually a tendency to want to re-write an old piece into something you’d want to play today, to get rid of the parts you find unsatisfactory. This time, Mr. Matsumoto said to study not only Yamato, but all of his other music, and I shuddered. I didn’t know if I was capable of it. But over several meetings, he gave me the feeling that I was making a good effort. Then it was OK.

Matsumoto: I just wanted to hear the music, I was being selfish. I’ve always thought of musicians as magicians. I still do. People say the same about artists. I’m embarrassed to step outside the range of my expertise. All I can do is ask to hear the music. From there it’s completely in the realm of the musician. I have boundless faith in Miyagawa, so I’m not worried at all about the music.

Host: I have no understanding of it at all. When I request a song, I entrust it to you completely and just listen for the greatness. If it’s efficiently done, so much the better.

Miyagawa: As I listen to the talk between Director Anno and Matsumoto-sensei, I think musicians are—with the exception of truly amazing classical performers—simple workmen. When I hear about how Mr. Anno eagerly watched our works while he was a student, I feel ashamed. Of course I, did not work half-heartedly, but while writing the music, I often thought, “this is good enough,” or “regular people won’t know the difference.” Then when others told me it was good, I believed them.

“Whatever you call for is what I want to do…” such a feeling is rare among true musicians, I think. I don’t want to say we’re dishonest, but as workmen, we calculate and compromise until we satisfy our patron. 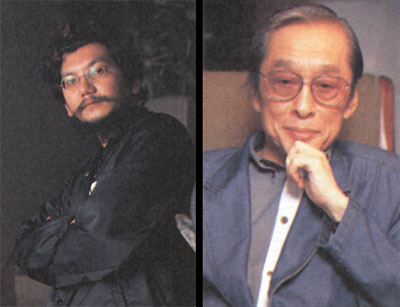 Matsumoto: It also happens to us when we are requested to draw. The text is already written, and I draw in accordance with the text…so it is the same. It depends on the situation you work in. So if you were to compose music for something you created, your intensity of thought will be stronger.

Miyagawa: I see. I don’t really understand the feeling because I don’t work like that. My focus is to adapt myself to the request. I think there is the unconscious thought that this makes people think of me as useful. This is how I feel when I listen to both of you. But if I were told to make my own symphony, I could only follow your suggestion.

Matsumoto: Then the issue is what you put into it, the intensity of thought. Anyway, I think those who play with polliwogs [musical notes on a page] are complete magicians. For us, if we look at a symphony score, it does not come into our heads as the combined sounds of the all instruments.

Miyagawa: It’s same with me! (laughter)

Matsumoto: But professional musicians can grasp it. This is the difference of expertise. I don’t have such an education, so I can’t understand it. When we ask for a certain kind of music, all we can do is to give examples, saying “something like this” or “something like that.” I sometimes thought that the least I could do was to draw the polliwogs, or sing it myself and ask someone else to write the notes. But it’s impossible, working out the combination of sounds. Even if I force myself, it will just be similar to something else.

Miyagawa: I see. I feel like I’ve heard a very good story from you two, what people should be like to really create something. 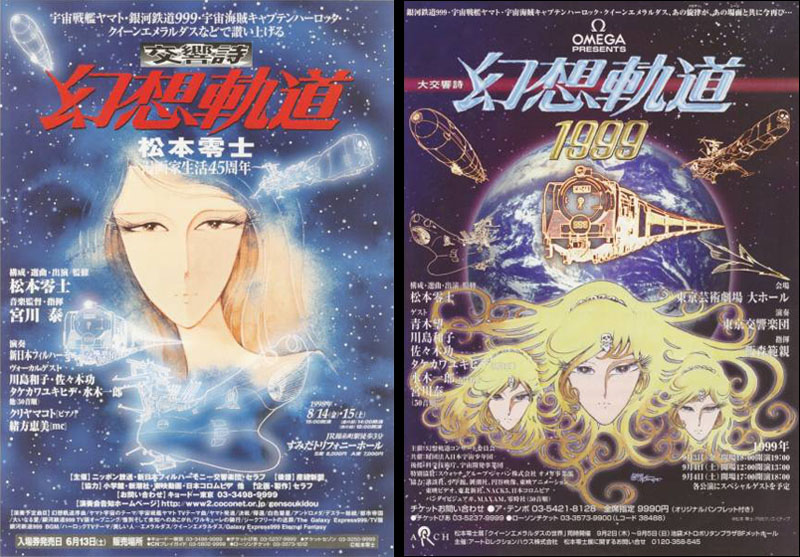