Over its decades of existence, Star Blazers has received remarkably little coverage in the world of Japanese print media — with one significant exception: the magazine of the official Space Battleship Yamato fan club. It featured unique articles on Star Blazers over four consecutive issues in 1986, providing a rare Japanese perspective on what was done with Yamato in the U.S.

Editorial content in these articles is slim, but we’ll take what we can get. The first look was in double-numbered issue 52/53. An article on the August 1986 club meeting mentioned that the first two episodes were screened for Japanese fans, and a two-page article was devoted to the 5-volume WCC Animation Comics series: 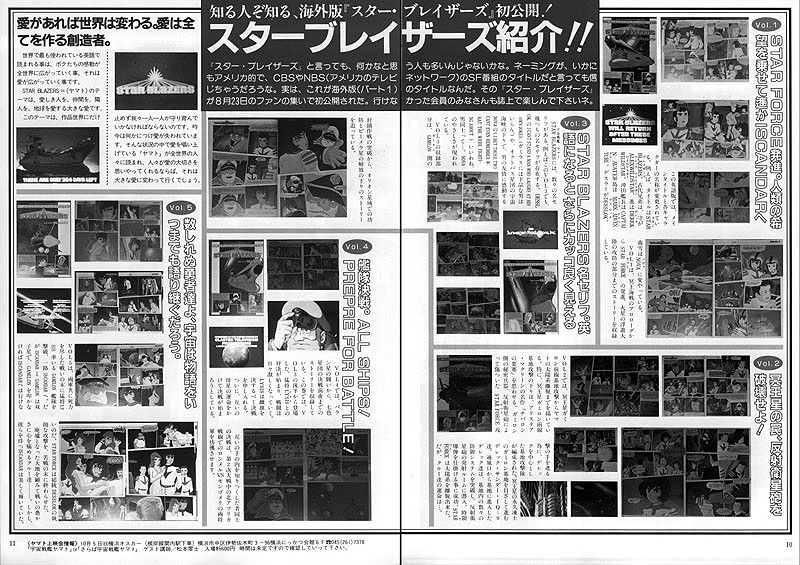 The blurb in the upper left explains why the series name was changed from Space Battleship Yamato. You know the drill.

Issue 54 devoted six pages to Star Blazers, starting with an overview of the American-made opening and closing titles. Evidently, they had no transcript for the song lyrics and had to wing it on what they thought they were hearing. 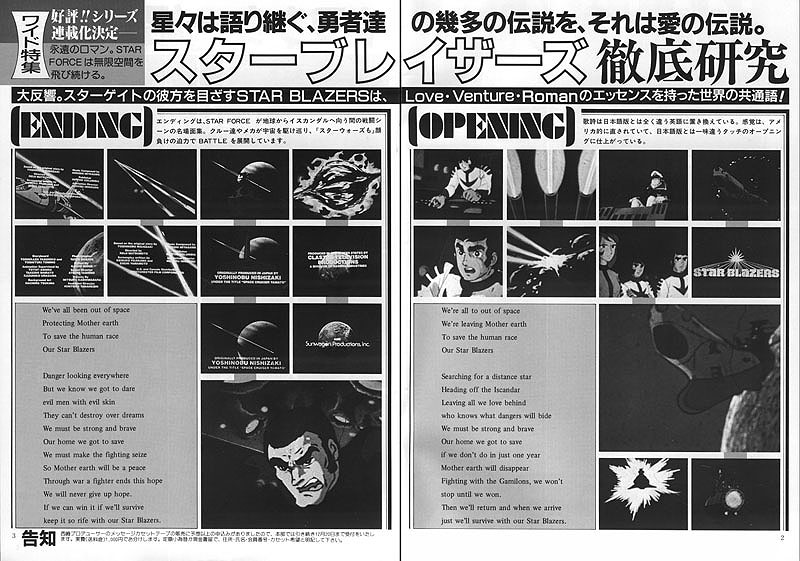 The results are less than accurate, but still match the tempo of the song in case you want to try your hand at some karaoke…

We must be strong and brave
Our home we’ve got to save
If we don’t do in just one year
Mother Earth will disappear
Fighting with the Gamilons,
We won’t stop until we won

Keep it so rife with
Our Star Blazers 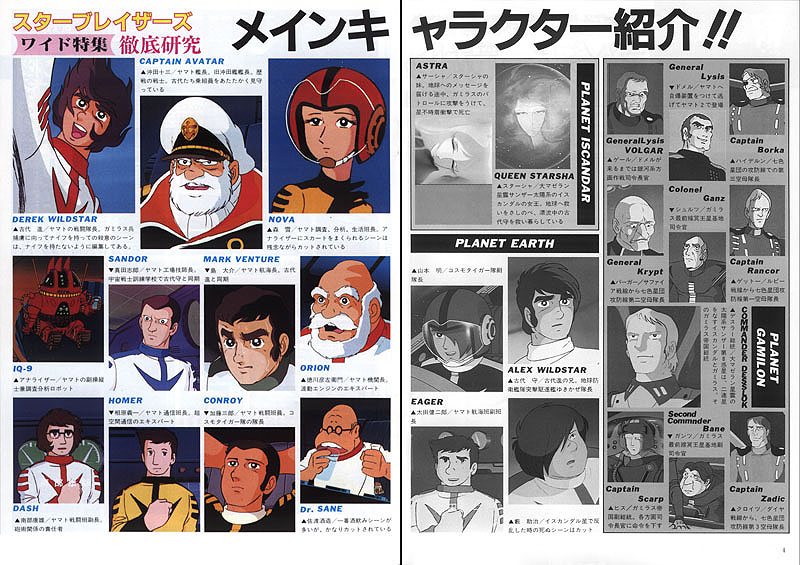 The next two pages were devoted to main characters, giving their English names but making no effort to translate them phonetically to Japanese. Oddly, no names were provided for Yamamoto (Hardy) or Yabu (Sparks), and Desslok’s rank went from ‘Leader’ to ‘Commander.’ 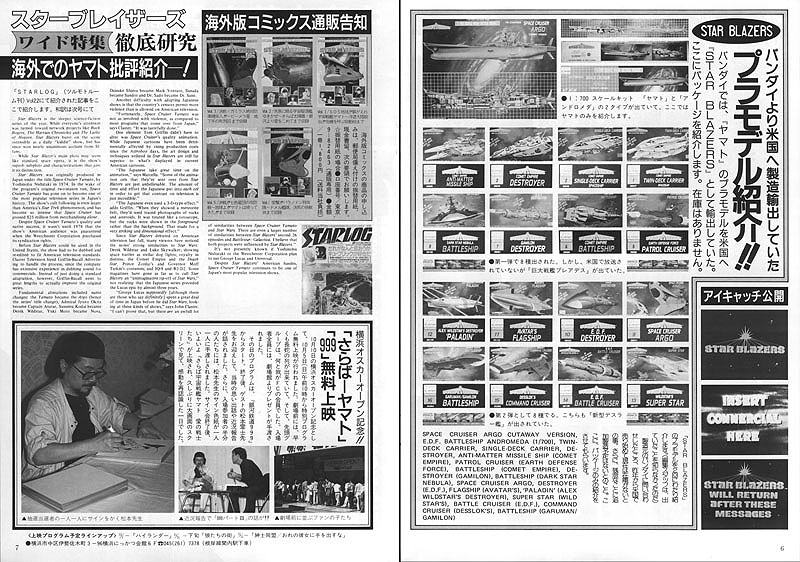 The last two pages from this issue are quite interesting from the standpoint of a collector. Above right is a remarkably complete look at the first model kits to be exported to America. This includes the 1/700 cutaway Argo and 16 mechanic scale kits, which were barely documented outside the literature of Twentieth-Century Imports. The English names for these kits were notable for being provided by superfans Steve Harrison and Jerry Fellows, who authored the justly-famous Space Fanzine Yamato.

The page shown above left reports again on the WCC Comics and also provides an excerpt from the only prominent English-language magazine article on Star Blazers, from Starlog #35 (June, 1980). It was evidently published in issue #22 of the Japanese edition, which is shown at the end of the text. The bottom left blurb is about a special October 1986 screening of Farewell to Yamato in Yokohama with a lecture by Leiji Matsumoto. 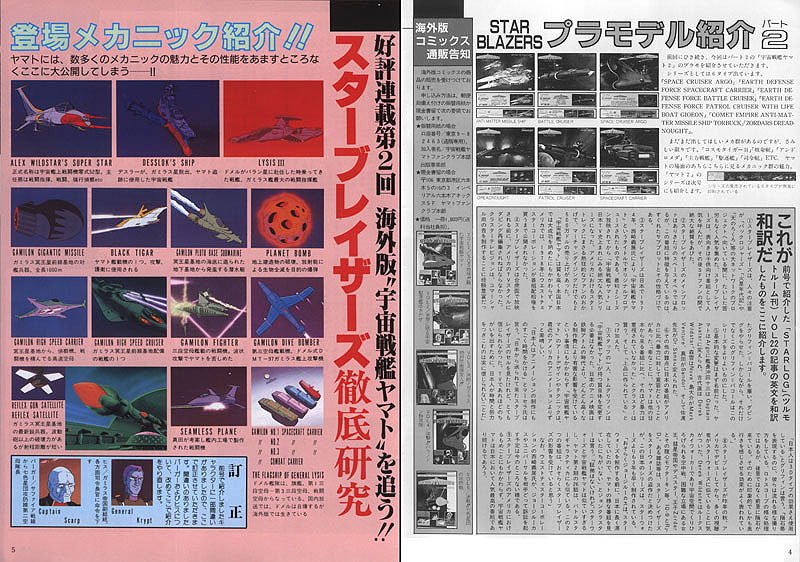 Club magazine #55 brought out two more pages of Star Blazers coverage, plugging six additional model kits, translating the Starlog excerpt, and offering translated names for some of the space mecha. General Lysis’ first vessel, which was unnamed in Star Blazers, has been labeled Lysis III. This assumption was based on its original Japanese name: Domelus III. The inset in the lower left seems to be an errata blurb that incorrectly reverses two character names. (Thus creating the need for another blurb.) 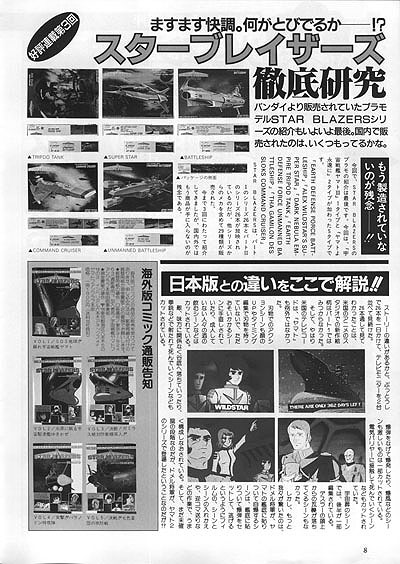 The coverage ended with a single page in issue #56. It rounded up the last five known model kits and concluded with an actual account of what it was like to watch Star Blazers in Japan. It reads as follows:

To write this story, we lined up two TV moniters and compared both versions of the first 26-episode series. We wanted to see if the American treatment had an effect on the original series. Of course, the TV code of the United States made no exceptions for Yamato.

There are also many cuts in the latter half. There is no scene of the ceiling falling onto Dessler’s head. But the biggest surprise was to see Dommel set a bomb on Yamato‘s hull and escape being killed. This was done by reversing, flopping, and reusing the film. Now we will have to confirm whether or not Dommel appears in Yamato 2! Some time after this article was published, another source popped up for the sort-of-English lyrics of the Star Blazers theme songs. This bonus booklet was included in the June 1995 issue of NewType magazine, which regularly published roundups of popular anime songs. This song book included a “Let’s Sing in English” section that included themes to Yamato, Mach GoGoGo, and G Gundam. The Yamato page is shown below.