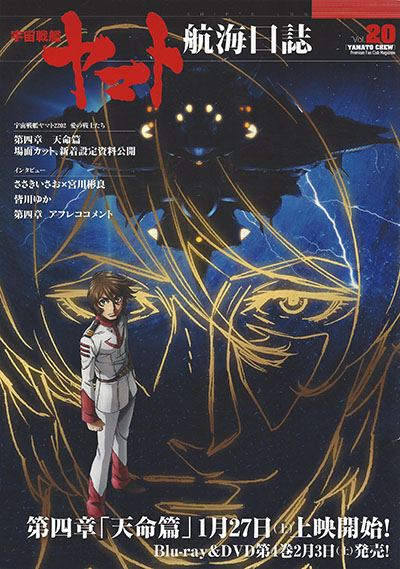 The first novelization for Yamato 2202 has been published. It thoroughly tells the story through Episode 5, Clash! Yamato vs. Andromeda in an extravagant 500 pages. The thought behind it was to reproduce the visuals in print. What is a novelization? And what is Yamato? We asked the author, Yuka Minakawa.

Interviewer: This is a big volume, 500 pages. Please talk about the concept first.

Minakawa: When an anime work is novelized, it gets turned into a digest and it’s a little different, right? With Space Battleship Yamato there was the Ken Wakasaki edition (Cobalt Library, Shueisha) and the Arashi Ishizu edition (Asahi Sonorama), but I liked the Keisuke Fujikawa version (Asahi Sonorama). [See the full lineup of Yamato novelizations here.]

In a time when there was no home video, it traced the TV series in three volumes (shown below): Departure, Death Struggle, and Restoration, and it was really nice to be able to see my favorite scene any time in print. Of course, it’s fine to have something summed up in one volume, but back then there was a real deficit. As a fan, I wanted to read the whole story that was in the series. So when I wrote a novelization, I wanted to do it without skipping anything. It became a feeling of completeness, and it took the form of putting in as much story as possible.

Also, one of the reasons for the large volume is that it has all the features of Space Battleship Yamato. When I talked with Harutoshi Fukui, Hideki Oka, and Director Nobuyoshi Habara, the rhythm of Yamato became a topic. In other words, I couldn’t simply skip things. You can’t just say “fire” in a Wave-Motion Gun sequence. It has to start with the energy rising. At the start, the gate opens steadily from 0.5. Because of the scale, everyone connects with the feeling that they’re on board Yamato. You can’t skip over its size and mass. 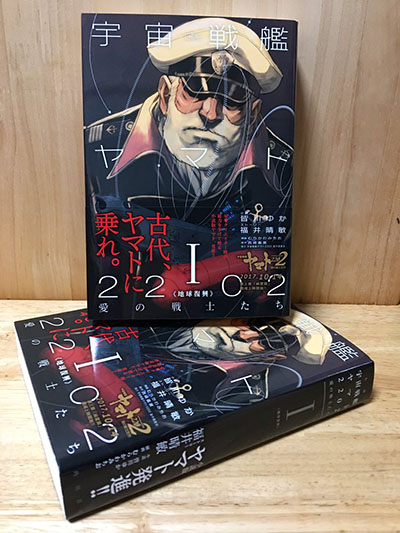 Mr. Fukui said, “You can’t leave anything out of Yamato,” and I didn’t get it in the beginning but gradually I learned. “This is bad. It’s really growing.” (Laughs) There was talk in the first place of dividing up the story, and the number of pages was assumed to be 300-400. It reached 500 pages, which is about double the length of a regular paperback.

Interviewer: It’s a real pleasure to read it and relive all the images. What are the features of the novel?

Minakawa: Since Mr. Fukui said, “It’s going to be heavy with orthodoxy,” I’ve had to be an acrobat. At first I suggested the method of putting comments and a glossary at the bottom of a page, but I was told to work it into the sentences and write in such a way to capture all of its power. “We trust you with orthodoxy, so please do it.” And I thought, “But sentences are much easier to write when you put design images and a glossary on the outside.” (Laughs)

So I read the script, the zero draft, the storyboards and the voice-recording script, and proceeded with the work. I also read the ideas in Mr. Oka’s zero draft that had to be cut because they couldn’t be visualized. They’re not just different, they give the idea that “There was also this route” and you understand the thoughts of the characters. In the future, I’ll look back at it as research. Also, I proceeded while asking Mr. Fukui, “Is some interpretation all right?” but since there is an original core I don’t intend to greatly change the development.

However, there are different angles that you can add or examine. I also decide whether to return to the script version or adopt the visuals. For example, the scene just before Yamato launches. In the film, we see Hoshina and others in the control room, and in the script there’s a scene where the water comes close to the boarding hatch so they can’t get on. I wondered whether I should adapt the script version as it rises. But then Shima appears and it’s a big surprise. I was torn over it, but I had to adapt the visuals since the nuance changed. 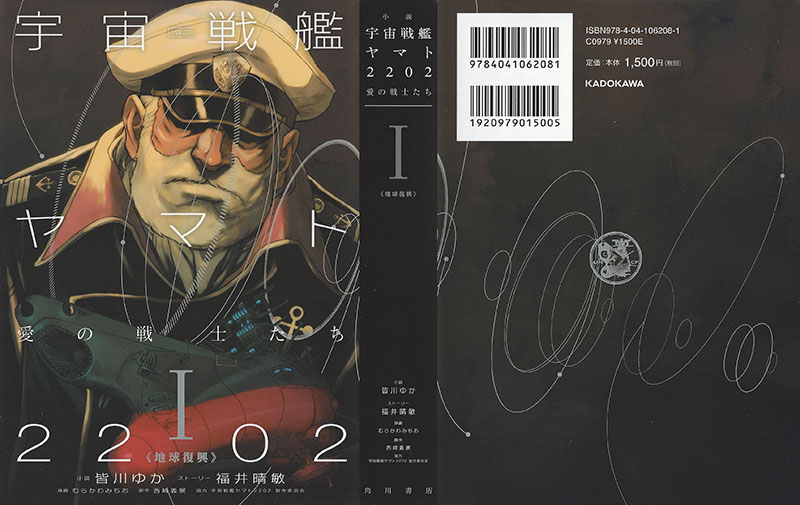 Interviewer: What are your impressions of interacting with Mr. Fukui?

Minakawa: As you may expect, it’s about Keyman. It’s a character who wasn’t in Yamato before, and it’s a suggestion that there would be a character with “individuality” in the Yamato world. For example, Frakken was originally in Yamato III, but he appeared in 2199 in a cooler form. I think that was [Director] Yutaka Izubuchi’s taste. That seems to be the case with Keyman this time. I wondered what was the meaning behind Mr. Fukui putting in Keyman, and I came up with the Yamato 2202 side story Garmillas Cheer (Ghare Gamilon) [published in Newtype magazine]. 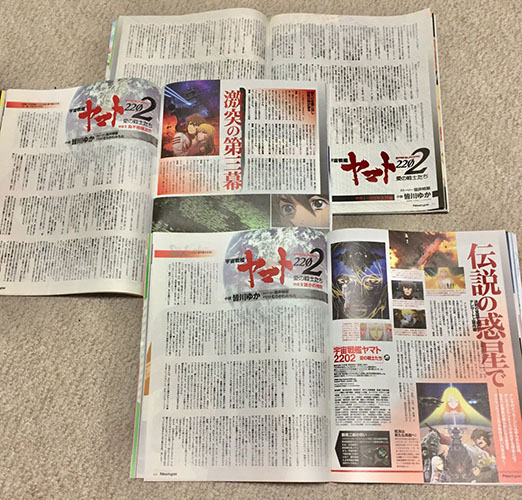 As of this writing, three 2202 side stories by Minakawa have appeared
in Newtype magazine. Photo posted on Twitter by Mat Hama

There’s also an element that’s only in the novel, a story about the Cosmo Reverse and Earth’s recovery. At first, I thought it would take time for the Cosmo Reverse to restore Earth to its original state. I talked with Shinya Ogura of SF Historical Research and came up with a story about Yamato generating quantum replacement while orbiting the Earth. I asked Mr. Fukui if I could use that image in the opening and he said, “That’s fine,” so as soon as they get to Earth it’s “Right away?” (Laughs) “Switch on the Cosmo Reverse now.” I thought of it as a broadcast, but not so sudden. If it was sudden, seawater would suddenly appear in a place where there wasn’t any, and that would be serious. So it isn’t that the Earth was restored and three years later everyone is doing well, it was three years of serious rehabilitation. So there was no time for Kodai and Yuki to get married, and Shima and the others feel that, “Reconstruction hasn’t ended yet.”

Interviewer: In that way, it’s similar to our current situation.

Minakawa: We live in the time of reconstruction after the Great Tohoku Earthquake [March 2011], and Mr. Fukui is very conscious of that. If we do it now, it’s not a Yamato with the lingering scent of rapid economic growth, it’s Yamato in a deflationary recession after an earthquake. It’s a form of entertainment, but that’s where Yamato starts from in 2017 rather than from Farewell to Yamato. I feel strongly conscious of that.

It’s not a superficial story, and I’m familiar with the fact that we’re no longer the elementary and junior high students who first saw Yamato. What is the Yamato that will be seen by people in their 40s and 50s, who have seen many joys and sorrows? I thought very much about that, too. And for those who are no longer innocent, I can’t bring back the courage or the tears they shed while watching the first Yamato…I think the present staff is making 2202 for that. Additionally, I think they’re wondering if what they’re making will make young people these days say, “That’s cool!” when they see it.

Why did everyone cry so much over Yamato? Was it because it came at that time? But why would they have cried back then? The amount of tears that were shed doesn’t compare to other anime. From the first Yamato in 1974 to Farewell to Final Yamato and also with 2199 and 2202, I strongly feel that at its core all of Yamato is built to say something. The theme is slightly different in each work, but there’s still something about Yamato. Even if it can’t be conveyed in language.

Of course, there are, for example, those who enjoy the story of “Deep Space Freighter Yuki.” Putting detailed gags like that into it will, on a deeper level, cause the readers to say, “There must be something to Yamato,” and I think I want to transmit the feeling of that “something” to the next generation. 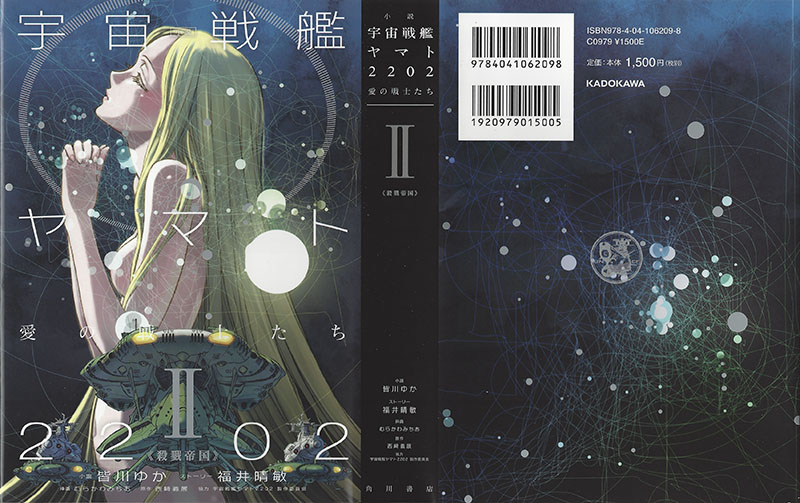 I want to respond to the great love of fans for Yamato, which is no small thing

Interviewer: This work is a high hurdle, isn’t it?

Minakawa: Very high. Rather than making a statement, I feel like I’m returning a ball that was thrown to me.

Minakawa: That’s right. (Laughs) It’s easy to misunderstand, but the work of a novelization isn’t like writing a side story. In that case, I can write freely with my own interpretation and answer my own questions. I empathize with the readers there, which is a great thing about fan fiction, but a novelization is different. There’s an original work, and you have to talk with those who created it about deciding whether to change it. Of course, you may be told to do it freely, but the most important thing is the point that, “The correct answer for me may not be correct for someone else.” 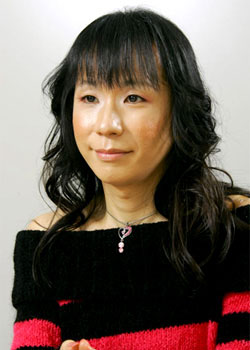 Minakawa is described as male
but identifies as female

For example, Mr. Fukui and Director Habara and their staff are on a mission to give Yamato a form for themselves. From the place where that overlaps with other Yamato fans, they open up new ground and show us things in an unexpected way. So I ask about my own part for myself. In this case, my rule is not to do that with a novelization. It’s natural that my correct answer will be different from a reader’s correct answer, so in that case I would like to give as much priority as possible to theirs. I want to cherish the sense that I stand as a mediator between the correct answers I’ve gotten from Mr. Fukui, Mr. Habara, and Mr. Oka and the correct answers of the reader.

Of course, I have my own likes and dislikes, and naturally stuff turns up where I say, “No, that’s pathetic.” (Laughs) Does everyone think that? I want to cherish that. Rather than become a tiny little self, I want to do the biggest thing and respond to the great love of the fans. You can do whatever you want with your own original work, so there’s no need to intentionally put your mark on Yamato.

In being given the task of novelizing this one, I think they have faith that I can balance the part I mentioned with self-restraint, the parts I put out with the parts I don’t, and I want to respond to that. Yamato is no small thing. Yamato is so big that it can’t be measured as one’s own small thing. Fans have been around for decades, and some young people might be seeing it for the first time with 2202. I’m writing it in order to prioritize the big parts of Yamato, not so people will look at tiny little me.

His licensed works include Mobile Suit Gundam Official Encyclopedia Gundam Officials (2001), Char Aznable Critical Biography (2006), Gundam Side Story The Blue Destiny (1997) Gundam Wing Side Story Sickle on the right hand, you on the left hand (1996, all above from Kodansha Library). In addition to Gundam-related books, he has written the Street Fighter 2 novelization Cammy History (1995, Wani Books), and the Air Gear side story Air Gear Another Trick (2007, both from Kodansha). He currently studies novel writing at Sagami Women’s University and serves as a part-time lecturer in contemporary cultural theory.

Find his works on Amazon.co.jp here