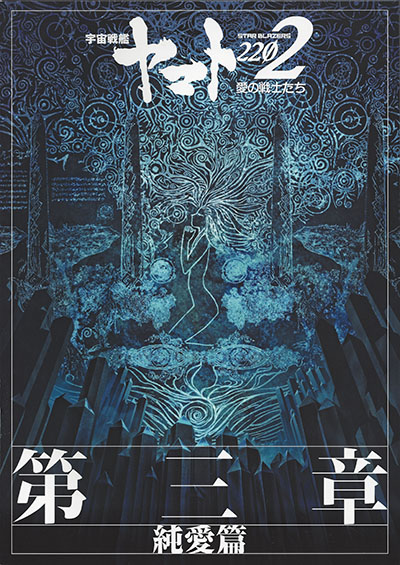 What is Yamato?
I continue to ask that while writing.

Interviewer: First, please tell us about your first encounter with Space Battleship Yamato.

Oka: Yamato or Monkey Army? I was troubled at the time of the first broadcast, and I ended up watching Monkey Army which was in the same timeslot. However, I was the only member of the Monkey faction among my family. My parents and younger brother were absorbed in Yamato.

Oka: After the broadcast ended, I was very interested in what kind of work Yamato was to get my parents so interested. I was excited when I learned reruns would start. This time I could taste Yamato! And I was hooked. I was in the fifth grade, and since then I watched the series without fail all the way to 2199.

Interviewer: Is there a work in the series that you have a special feeling for?

Oka: All of them. If you told me to pick just one, it would be impossible. I think the first TV series in particular is extraordinary. In the world of TV anime, no one had ever forged a path into that world and returned in one piece. “Yamato’s journey” can be called a monumental achievement. I think Farewell to Yamato is the most pure in terms of cinematic perfection. The visuals and music evolved solidly and dramatically in Be Forever and Final Yamato…each one was magnificent.

Contradictions were born as each new series was added, but in terms of popularity it had a history that opened up a big lead over other works…and I still loved Yamato, including the frustrating parts. There is no substitute for the presence of Yamato itself and the overwhelming music.

Interviewer: How did you get the opportunity to participate in 2202?

Oka: The offer came from Director Nobuyoshi Habara. He and I met when we went to a movie in the fall of 2010, and our friendship continued from there. The fields of animation and tokusatsu (live-action special effects) are different, but we’re both directors so we have a lot to talk about. While picking pots together, we watched the old Yamato works and DVDs of Tiger Mask. It was an exciting relationship. “We were brought up with these wonderful things! We should repay it, even in some small way!”

Interviewer: At which stage did you participate?

Oka: The I heard of it was May 2015. At the time I was supervising a tokusatsu work in Indonesia that local children watched. One day when I was close to coming home, I got a simple email from Mr. habara. “Xebec will produce a sequel to 2199. It’s a remake of the White Comet Empire. Please write a proposal for it.”

What is this? I was confused about what was happening, but Mr. Habara was going to make a “new Yamato,” so I wrote a proposal plan for the story and sent it to Japan. He got in touch and said, “Join the staff when you return home.” I was so surprised my jaw dropped. When I got back to Japan, it was Harutoshi Fukui who had been brought in to work with Mr. Habara.

Interviewer: What was your first impression of Mr. Fukui?

Oka: Well, I thought the candidate person should really know Yamato. The history of Yamato actually ended once with Final Yamato, and until Resurrection, I’d been foolishly playing out unofficial simulations in my head the whole time. Every time a new talent appeared in the world, I continued dreaming about what would happen if this person did Yamato. It was big, heavy stuff. Naturally, Harutoshi Fukui, who is good at macho stuff, was one of those who I imagined. (Laughs) And it really appeared that Mr. Fukui was going to make the new Yamato. If he was going to participate, they wouldn’t need me. That’s what I thought, but Mr. Habara said in his position as director that, “I want you to be Mr. Fukui’s assistant,” so it was resolved.

Interviewer: By the way, what kind of content was in your first proposal?

Oka: It was quite conscious of being the sequel to 2199. Elements of Farewell were used the first half, the first 13 episodes. After setting up a miserable situation, the second half was all original development. Yamato became deeply involved in the ancient connections between Garmillas, Iscandar, and Gatlantis, and it was completely different from 2202. On the day I met Mr. Fukui, I was flatly told, “There’s no point in using this now.” By the time of our first meeting, Mr. Fukui had already finished the outline for 2202.

Interviewer: Were there some impressive parts in Mr. Fukui’s concept?

Oka: Yamato was superbly reproduced in 2199. But there were a few things lost in the process, and some things they dared to let go. I wanted to shed some light on them again. When I first heard about Mr. Fukui’s big policy for 2202, my sympathy and stirring-up ran about half and half.

Interviewer: Was it decided from the beginning that you would be in charge of the scripts for the whole story?

Oka: No, at first I thought there would be a rotation of multiple scriptwriters. However, no other names ever came up. When I asked Mr. Fukui about it, he said, “If it’s just the two of us, we can do it,” and I got stirred up again. (Laughs) 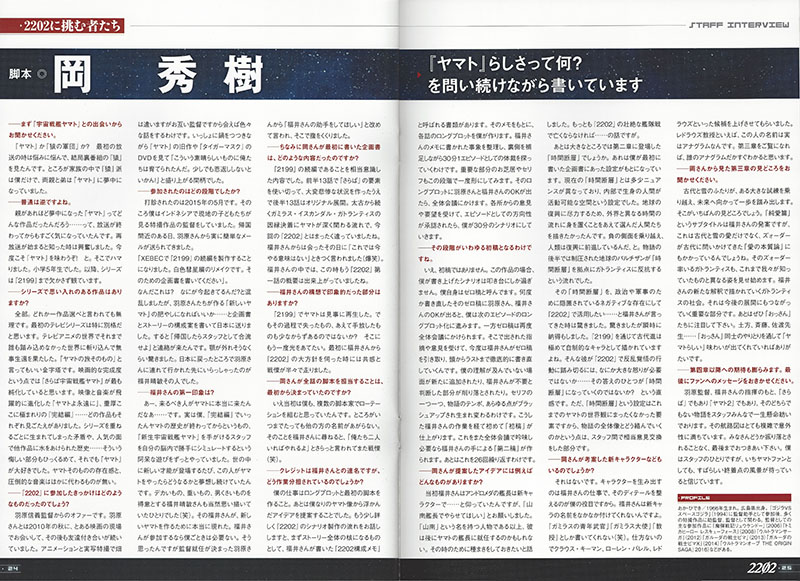 Interviewer: You have a joint credit with Mr. Fukui, but how is the work shared?

Oka: My job is to create the long plot and the initial draft of a script. I propose ideas that emerge from my own Yamato image. I’ll tell you about the flow of 2202 script production in a little more detail. First, for the overall core of the story, there’s a document written by Mr. Fukui called the “2202 Composition Memo.” Based on that memo, I make the long plot of each episode. I organize the events written in Mr. Fukui’s memo and supplement it with background to create a single 30-minute episode. I try to shape the important parts of the story and some of the lines at this stage. If Mr. Fukui and Mr. Habara give their OK to the long plot, I submit it to a general meeting. We collect opinions and requests from various places and if the direction is approved I make it into a 30-minute script.

Interviewer: That stage is what we would call the first draft, isn’t it?

Oka: No, it’s not a first draft. In the case of this work, the script I finish writing is just a proposal. I personally call it the zero draft. When Mr. Habara and Mr. Fukui give the zero draft their OK after I rewrite it a few times, I move on to the long plot for the next episode. On the other hand, the zero draft could be submitted to a general meeting again, and after receiving advice and comments, Mr. Fukui could take over the zero draft from there. It gets heavily rewritten from start to finish. Scenes can be added that go beyond my understanding, and parts that Mr. Fukui judges as unnecessary can be dropped. Every line, the tempo of the story, and every point is brushed up and reborn. The “first draft” is finished only after Mr. Fukui is done with it. It’s examined in another meeting, and if necessary he makes a “second draft.” This is repeated 26 times.

Interviewer: What is an example of an idea you suggested?

Oka: At first, Mr. Fukui said that Andromeda’s captain would be a new character, and I said, “I’d like it to be Captain Yamanami.” Since he’s a person with a big name, he may later become the captain of Yamato, and I wanted to plant the seed for that time…at least, if he’s not lost in the spectacular fleet battle of 2202.

Then there’s the big point of the “time fault” that appears in Chapter 2. That was based on a concept from the first proposal that I wrote. It had a little different nuance from the current “time fault,” and the idea was that humans could work inside it. I wanted to depict people who dared to make the choice of living in a different flow of time from the outside world, in order to make an effort for the revival of Earth. They would overcome the negative side and humans would make progress toward reconstruction. In the latter part of the story, the partisans of Earth gained control over the “time fault” as their base to rebel against Gatlantis.

I was surprised when Mr. Fukui said he wanted to take advantage of the “time fault” to make it a negative presence in 2202, concealed for political and military affairs. I was surprised, but I understood it instantly. Throughout 2199, Susumu Kodai is portrayed as a very self-disciplined character, but we needed some big anger for him to take action as a rebel in 2202. Could our answer to that become the “time fault”? It was intuition. However, the “time fault” concept is an element that hasn’t been part of the Yamato worldview so far, so the point of how to integrate it into the overall picture of the story was the subject of considerable debate among the staff.

Interviewer: Are there any new characters created by you?

Oka: No, there aren’t. It’s Mr. Fukui’s job to create characters. It’s my job to adjust the details. Mr. Fukui doesn’t easily come up with names for the new characters. He just writes “Young Garmillas military officer” or “Garmillas ambassador” or “professor.” (Laughs) So I had no choice but to suggest candidate names such as Klaus Keyman, Loren Varel, and Redrauz. Professor Redrauz’s name is actually an anagram. When you see Chapter 3, I think you’ll know immediately whose anagram it is.

Interviewer: What do you consider to be the highlights of Chapter 3?

Oka: Kodai and Yuki overcome a big ordeal and take a step toward the future. That’s the most important point. The subtitle Pure Love Chapter was Mr. Fukui’s idea. It’s not just the love of Kodai and Yuki, it also hangs on Zordar telling Kodai his “essential theory of love.” It will begin to show a different form from what we’ve known up to now. Gatlantis society is depicted in a new interpretation by Mr. Fukui, and it’s an important part for future developments. Also, please pay attention to the “older guys.” Hijikata, Saito, and Dr. Sado…the “older guys.” The “Yamato taste” comes out through their exchanges, and I appreciate that.

Interviewer: Expectations for Chapter 4 will also increase. Finally, please give your message to the fans.

Oka: Under Director Habara, Mr. Fukui, and the hardworking staff, a story is being spun that is both Farewell and Yamato 2, and also neither of them. The plot is very complex and full of surprises. Please stick with us to the end without being shaken off. I’m one of the staff, but as a Yamato fan I believe the scenery of a wonderful destination is waiting.

Born in 1966, from Hiroshima Prefecture. After working on Godzilla vs. Space Godzilla (1994) as an assistant director, he was involved in many tokusatsu works as a director. He is mainly known for Magic Bullet Chronicles Ryukendo (2006), Tomica Hero Rescue Force (2008), Ultraman Saga (2012), Garuta Warrior Bima (2014), Garuda Warrior Bima X (2014), Ultraman Orb The Origin Saga (2016) and others.