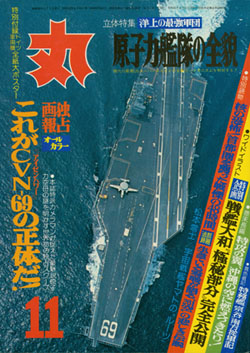 Maru (meaning “Circle”) was a Japanese magazine for military otaku, densely packed with historical articles, photo-features, and diagrams exploring real-world mecha with a special emphasis on naval technology. This naturally attracted someone like Leiji Matsumoto, whose mania for such things has always been evident in his work.

Shortly after the TV premiere of Yamato 2, he penned this essay for Maru in which he recounts his memories of growing up the post-World War II years and carries it forward to his work on Space Battleship Yamato, which was now at the peak of its popularity. He also writes about his own father, who was the living model for Captain Okita.

I have probably been an “aviation/airplane fundamentalist” since my childhood. As far back as I can remember, I always drew pictures of planes hitting and sinking battleships and I never drew a single picture in which a battleship crushes airplanes. My memory goes back to around 1944, when the era of the battleship seemed to be over even in the mind of a child.

Most of the planes I watched in the sky were US airplanes which had the star emblems. If I were asked to remember which ones I saw, without question almost all had the stars on them. I have a clear memory of the types, such as the B-29, F6F, P38, and the Corsair, but my memory of Japanese airplanes is unreliable; Zero-ish, Hayabusa-ish, or Chuuko-ish.

If the son of a pilot was like this, no wonder Japan was knocked out. My father, who survived air battles and came back from the south, had a bitter smile, saying that we were defeated in our absence. [Translator’s note: this probably meant the US air force conquered the soul of the children while the father was absent.] This was when we evacuated to the mountains of Shikoku.

I hadn’t seen the sea very much during my childhood. I would only see airports, the airplanes, my father’s side car and the mountains of planes with the star markings. Thus, I didn’t have any impression of the large ocean. It wasn’t until after the war that I went to Kokura in Northern Kyushu and became accustomed to the sea. I remember that the Occupation Force warned the fishing boats that British cruisers would pass the Kanmon Strait at full speed. While I was watching, Britain’s meager squadron went by, kicking up white waves. Later I heard that several fishing boats were broken by those waves. It was an old self-proclaimed former navy sailor who denigrated them while watching from the wharf. 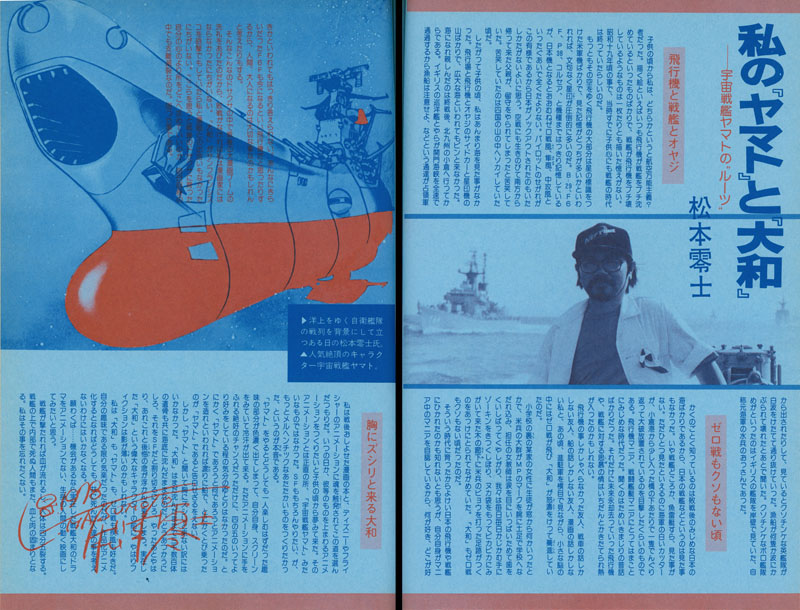 When the Zeros Meant Nothing

As such, all I knew after the defeat was the miserable Japanese sea, so I never got a look at Japan’s battleships. At that time not even torpedo boats could be seen. The only Japanese ship I saw was a destroyed white navy cutter, upside-down and left under the bridge inside of Ogura Harbor. It was truly a wretched time to have a mania for combat planes and warships. All I heard were old tales mixed with sighs. This situation probably stirred my yearning and zeal for the airplanes and battleships that were lost forever. 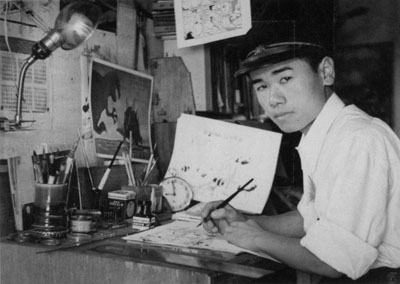 One day the American troops surged into our elementary school with their boots on, claiming that a woman living behind the school was taunted by some students through the window. Our female teacher was ashamed with tearful eyes, clenching her teeth; we were dumbfounded and looked at the Americans’ footprints on the shiny corridor, which we wiped at every day with numbed hands tightly squeezing a dust cloth. At that time, Yamato or a Zero meant nothing.

Growing up in such days increased my attraction to Japanese airplanes or battleships, I think; but I also recognize in myself the mania of manias, so it’s hard to clearly explain what I like or why. For example, I used to intensely dislike the F6F, but now now I consider it a nice plane. This makes me think it is important to grow up.

After one thing and another, I was baptized by the big postwar comic [book] boom, so I am quite sure that I would not have become a manga artist if we were not defeated. I’m sure that I would not have discovered comics if Yamato had shelled San Francisco. By this rationale, I don’t know where the foundation of my heart lies, since I grew up in the post-war confusion. What a problem. 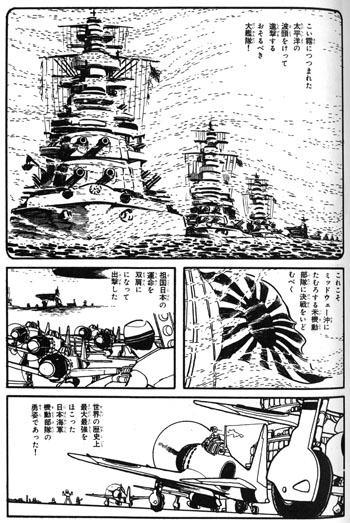 The comic [book] boom after the war and Disney and Fleischer’s animation inspired my soul, leading me to choose my path. Since my childhood, I had dreamed of making animation that would one day surpass theirs. Speaking honestly, I did not think of making something like Space Battleship Yamato. I love to work on science-fiction, but I wanted to make something more like heart-warming fairy tales.

Yamato strongly shows the color of my hobby, which I intended to enjoy for myself. So when I watch Yamato now, it puts me in a cold sweat. However, it was a great opportunity for me to get involved in animation, so I didn’t have time to be choosy. Whether it was Yamato or something else, it was a chance to create animation. As the [Japanese] proverb goes, “when I need a ride, there is a ship,” and I have to confess that the ship I jumped on happened to be Yamato.

However, when I first learned that the story would involve Yamato, I could not but help feel something deep in my heart. The Battleship Yamato sank to the bottom of the ocean with three thousand hands. However we approached it, even if we tried not to be sentimental and think of it as “mere SF,” many regrets surfaced in my mind afterward. In the face of the real thing, the fictional Yamato leaves little impression.

I am fond of the Battleship Yamato, Space Battleship Yamato, and the Zero and Hayate fighters. I can enjoy them lightly as long as I consider them my hobby. But once the idea becomes animation and ends up on the screen, I can’t help thinking about those who passed away with the originals. I only wish…if I had a chance, I would like to film the drama of the real Battleship Yamato, not in animation but with real people.

If a battleship is destroyed it would shed blood and a human body would be torn to pieces. Those who died on or in a battleship became chunks of flesh and blood. I don’t want to forget about this.

[Editor’s note: Matsumoto did get his wish in a way when the magnificent live-action film Men of Yamato was released in 2006]