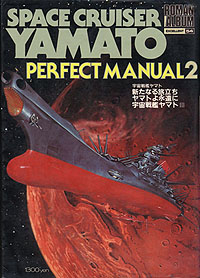 The Perfect Manuals were Tokuma Shoten’s greatest gift to Yamato fans, two volumes in their famed Roman Album series that offered more depth and detail than had been previously published outside the nerve center of Office Academy & West Cape Corporation. The second of these volumes contained extensive staff commentary, including this Matsumoto essay about the making of both Series 1 and Farewell to Yamato.

Initially, I was brought on only as Yamato‘s art director, but once production got underway, I became the overall director of the series. They left everything up to me, from the original designs to the final cut, and I kept changing things to suit my whims. In fact, I ended up doing about half of the first series’ storyboards myself.

My storyboards tended to stray from the written scripts, particularly in the first five episodes. I changed a lot of the dialogue and situations through the storyboards, since they lacked the feeling I wanted to express. Before I realized it, I had re-written complete episodes. Whenever I watched the final footage, though, there was always something that I wish I’d done better. I’m familiar with my weak points, and seeing the finished product at least allowed me to examine them for my own improvement. Some scenes are embarrassing to me now, and they annoy me to no end when I see them.

Pre-production was an interesting process. Mr. Nishizaki had a thing about meetings, and I was attending them constantly. During this time, the backbone of the story kept changing. For example, we added the wave-motion gun and the wave engine to the Yamato after carefully considering their possible chain reaction on the surrounding area. At the time, I had my younger brother ask the professor of the research section of Kyushu University about space-motion theories. Once these things were worked out, they gave us new ways to tell our story.

We wanted to make Yamato a space drama with the ship being the main focus. Although our Yamato has its roots in the original battleship, we took extra care to distinguish the two. We didn’t want this to be a war movie, or some tale of military history. We avoided focusing on war banners, military marches, and the chrysanthemum crests on the bow of the battleship. We eliminated altogether the military ranking system, consolidating the various posts. I really didn’t care for keeping a salute, but we ended up creating the special “Yamato salute” by having the hand placed at heart level. The Gamilas salute resembles the German “Heil Hitler,” but in reality it is used around the world.

During production of the second episode, a major uproar erupted over the inclusion of a traditional military march. I felt this would surely be misconstrued as a political statement. We changed it for the reruns, which is why it is no longer in the episode. These days, we wouldn’t be concerned about such things, but back then we worried ourselves silly over stuff that no other anime production even considered.

There were all sorts of things we created on the fly. Even though there is no up or down in space, we decided to add a third bridge to the belly of the ship, since we felt it would be awkward to have nothing down there. In order to differentiate the ship designs between Earth and Gamilas, we put camouflage on the Gamilas ships, but when they didn’t show up well on screen, we gave up that idea.

Mr. Nishizaki and I would often get into heated arguments about the use of color. For example, when it was decided to make Kodai’s uniform red, I naturally though of using blue for Shima’s outfit to differentiate the two. But he told me to use green, which is a complementary, rather than a contradictory color. I’m sure he still recalls shouting at me that he wasn’t color blind!

Although directing the program was my job, it was also my hobby, and there were many interesting aspects to it. When an energy beam was fired, we showed the entire process. Sometimes a ship’s engines wouldn’t start on the first try. We did all sorts of things with missiles being fired in space. And during a session when we had eaten some smoked octopus, we went as far as creating an Octopus Army.

The schedule was extremely tough, though. At the time, the studio was in Sakuradai. The entire staff would walk around the area in rumpled or dirty clothing. There were two Swedish girls who worked part-time in a bakery just below our studio, and we frightened them so much that they ended up quitting their jobs. A police officer nearly had me arrested one evening, just because of my appearance, when I was walking to Sakuradai from a nearby junior college. I must’ve looked like a crook to him.

Things may not have been so bad if I’d been able to sleep after a day’s work on the anime…but I also had work to do on the manga version, since they were being produced simultaneously. I lost a lot of sleep. I became emaciated as a result, and it was hell until I adapted to this lifestyle. Since the manga was a monthly publication, the TV series sped on ahead, and I had a hard time catching up with it. This wasn’t like one of my other works, Galaxy Express 999, which was published in manga form before it was animated. That wasn’t a problem for me. The work I did on Yamato was interesting enough, but I vowed never to commit to such a hellish schedule again! 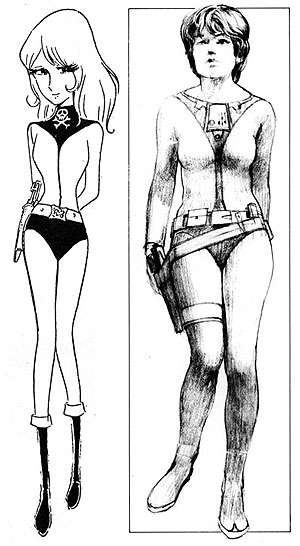 There was also one big disappointment for me. Originally, I wrote a plot for a 51-episode series. When they trimmed it down to 26 episodes, I nearly flipped. The story about the journey to the Small Magellanic Cloud, about Mamoru Kodai being Harlock aboard the space pirateship Deathshadow–all of this had to be eliminated.

Three years later, the theatrical version of Space Battleship Yamato became a major hit. Since it was an anthology of the 26-episode TV series, there was every indication that the story could continue and be a success. We began developing a sequel called Farewell to Space Battleship Yamato. A big animation boom began to take hold in Japan, and we all felt that we were going to blow people away with the new story.

Then I saw Star Wars and Close Encounters of the Third Kind. They left me in a daze. The thought of having these movies compete with a new Yamato film was a shock to me. The stakes had been raised, so from that time on our projects had to have a larger vision. However, if one looks closely at the materials used in Star Wars, you notice some similarities to our work. An early costume design for Princess Leia resembles the uniform of Kei Yuki, one of the characters in my Captain Harlock series. There were similar elements of ship design as well, like the way the access hatch of the Millennium Falcon opens downward. They managed to come up with some fairly sensational designs, and we were determined not to be left behind. This all had an incredible impact on us at the time we developed Farewell to Yamato.

The first screenplay for Farewell was written by three people and timed out at nearly three and a half hours. The budget for this would have been huge, and required us to print the film on 16mm instead of the usual 35mm. This would have meant a loss in picture quality. The film distributors were apprehensive about this, so we instead cut it down to 151 minutes. 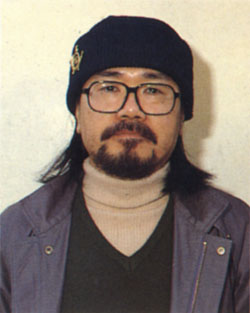 Mr. Nishizaki’s original vision that inspired this film was an image of the Yamato disappearing into endless cosmic space, taking all the characters with it. I got into a big argument with Mr. Nishizaki over the idea of killing everyone off. One of my fundamental beliefs is that humans will do anything to survive, even if they must resort to cannibalism. I’m not fond of the actions of the Japanese Special Forces, myself. I don’t agree with sending youths on suicide missions. That’s why we allowed our characters to live in the TV version of Farewell, which was called Space Battleship Yamato 2 [The Comet Empire].

I originally became a manga artist because I always wanted to do animation. I’m a die-hard anime fan, and I had to become involved in every aspect of the process. In the end, I just couldn’t keep up with it all. That’s why I limited my involvement in later Yamato projects. Working on this series was a once in a lifetime opportunity for me, for which I owe Mr. Nishizaki a debt of gratitude. If not for him, I’m sure it would have been a long while before I did anything in the field. I was there at the right time, and I’m very happy about that.