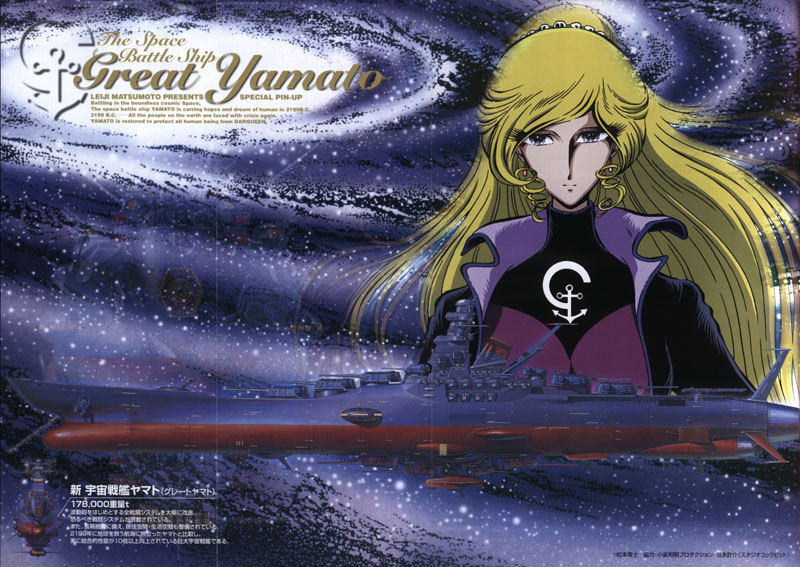 Battling in the boundless cosmic space, the space battleship YAMATO is carrying hopes and dreams of humans in 2199AD. In 3199, all the people on the Earth are faced with crisis again. YAMATO is restored to protect all human beings from DARQUEEN.

From the very beginning of his tenure as a copyright holder for Space Battleship Yamato (1998-2002), Leiji Matsumoto was determined to bring Japan’s most famous spaceship back to life. 1999 would be the 25th anniversary of the first TV series, and something big would have to commemorate it.

Since he anticipated Yamato would be his for the rest of time, he began to weave it into the vast fabric of his multidimensional SF universe. This meant that Yamato could finally cross paths with Captain Harlock (as per the original TV scenario) as well as Matsumoto’s other creations, like Galaxy Express 999 and Queen Millennia. He was so energized by this long-awaited opportunity that he announced (in an interview for Comic Gon Magazine) a grand storytelling journey that would take another 25 years to complete.

The first step toward this ambitious goal was to thread Yamato into his ongoing Galaxy Express manga. Readers only saw the ship from the outside, but it was unmistakably the real deal. Matsumoto followed up with anime cameos in a pair of OAVs: DNA Sights 999.9 and Galaxy Express: Eternal Fantasia, and a 2001 PlayStation game titled Story of Galaxy Express 999. A Yamato connection was also strongly implied in his Cosmo Warrior Zero PlayStation shooter (1999). (See a visual rundown of these here.)

After crossing this boundary, the next step was to give Yamato its own revival. The Japanese title for it was simply Shin [New] Space Battleship Yamato, but the secondary English name did a better job of setting it apart: Space Battleship Great Yamato. 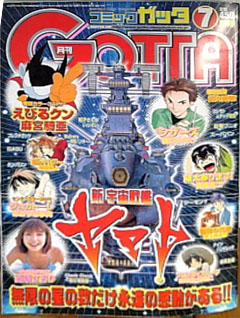 The story first appeared in February 2000 as a serialized manga in Shogakukan’s monthly magazine, Gotta Comics. It was set in the year 3199 and brought together the distant descendants of the Yamato crew to lift off in a much bigger version of the original ship. They launch to combat the forces of a galactic villain named Darqueen (who crosses over into Galaxy Express) and the roving black hole that she deploys toward Earth. A second space battleship named Mahoroba shows up to join the fun. An additional comment on the story comes from the authors of a 2003 book titled Leiji Matsumoto’s Outer Space: 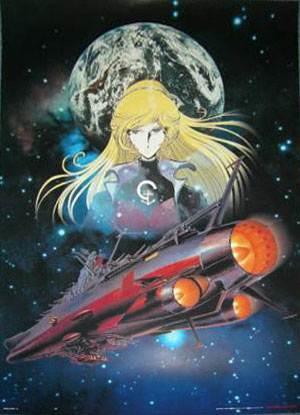 Close adherence to the pedigree is not strange. The 32nd descendent in the line of Kodai and the daughter of Starsha both inherited their names. Like the inheritance of a fine wristwatch from father to son, the legendary lovers Kodai and Yuki have moved many generations to tears.

Handling the machinery of Yamato for the first time comes as naturally as a lullaby once heard from a parent. Matsumoto’s belief is that the spirit is inherited along with DNA, and this allowed him to borrow the characters’ original appearances.

As for this work, the message rises a little too strongly to the surface and it cannot yet be said that a story begins with the new voyage of Yamato. If this work can be understood as a mirror of Matsumoto’s present self, everyone is certain to be interested in where it goes in the future.

The new Yamato, the new 999, and the new Arcadia will sooner or later have to fight against the “nothingness” to prevent the disappearance of the universe. This is clearly a fight against death itself. It is also a struggle for Matsumoto to pour all of his power into this magnificent mythology.

The nature of the fight and the structure of the world will be drawn by the activity of various heroes. We can expect the new expansion of the Matsumoto universe to be huge.

While the manga was underway in Gotta, Great Yamato jumped past anime straight into the world of soundtrack music. In a brilliant move, Matsumoto, Columbia Records, and composer Hiroshi Miyagawa came together in a sort of “holy triumvirate” to revive the world of Yamato music for the Symphonic Suite Great Yamato. It served as the kickoff for both the new story and the groundbreaking Eternal Edition CD series that revisited the entire saga. The suite’s 8 tracks were split evenly between old and new score with Miyagawa returning to the peak of his creative power.

Premiere parties were held for the new album, including one at a Yamano Music store that featured a talk and signing session with Matsumoto. The 2-sided invite is shown above.

A 2001 calendar was published in late 2000, containing six new paintings from across the Matsumoto universe. Two of them featured Great Yamato. As should be increasingly obvious by now, a lot of mileage would be gotten out of these two images, which were painted by artist Koizumi Kazuaki and his studio. (See more of their work below) 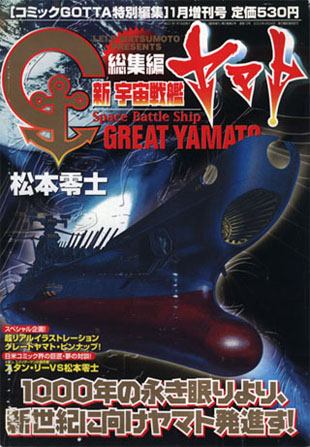 Next came the manga itself, in two forms following its serialization in Gotta Comics. First there was a 264-page Gotta Comics Special, published in January 2001 (shown at left) which did not contain the entire strip, but added some interesting support articles including a meeting-of-the-minds between Leiji Matsumoto and Stan Lee. The paperback collections (at right) appeared in March and August, taking the story to its conclusion over 400 pages. During this time the ship only managed to launch from Earth, meet up with its sister ship Mahoroba, and fire its weapons, which should tell you something about the pacing. 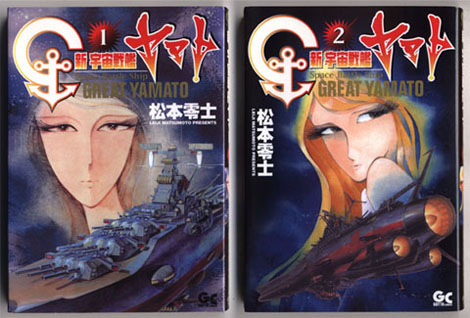 A modest merchandising campaign accompanied the manga release, including a t-shirt (above left), a Seiko wristwatch (above), and a pair of Zippo lighters (below). These had been repurposed from a 25th Anniversary Yamato lighter sold in 1999. (See the original here.)

Fans who were lucky enough to meet Leiji Matsumoto at special events during this time might have scored an autograph on a custom-made Great Yamato picture card (above left) or grabbed odd merchandise like this trio of mousepads (above right).

Venture Soft’s name appeared again on a set of Great Yamato postcards that showcased the high-quality artwork that had been developed concurrently with the manga and appeared on other products. The ship paintings are by one of Matsumoto’s former assistant, Koizumi Kazuaki. He had gone on to found a studio dedicated to the creation of such works and maintained a strong relationship with his fomer sensei. The interiors were painted by Katsumi Itabashi.

In late 2001, a new Leiji Matsumoto art calendar was published for the year 2002, which featured many of the same paintings for Great Yamato, along with others for Galaxy Express. Koizumi Kazuaki was again credited for the paintings with “Flamingo Studio” credited for overall design.

The culmination of all this activity came in early 2002 when Matsumoto announced his intentions to move the story into its next phase: anime. Specifically, an anime project with the unwieldy title The Great Galaxy Series: The Tale of Great Yamato 7vs7. This proved to be one step too many for others who had an interest in the Yamato copyright.

Despite the grand plans and the bombast, Great Yamato was cut short when a court order in Japan blocked Matsumoto’s further use of the copyright in March 2002. But despite this curtailing of Great Yamato‘s voyage, he still had a hand to play in the future of Yamato adventures. In fact, he set to work on another one almost immediately, which would expand faster and in more directions than anyone expected. Click on the link below to read all about it.

Continue to the Dai Yamato page 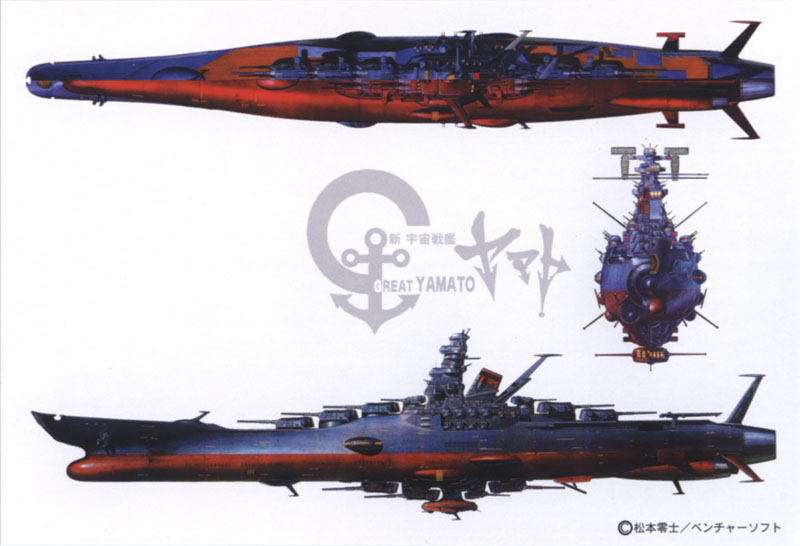 One more piece of the Great Yamato puzzle was scheduled to appear in September 2005 as part of an art portfolio by Katsumi Itabashi called Mecha Box. It was to feature a mouth-watering collection of his renderings of Matsumoto mecha along with a diecast Arcadia model. Unfortunately, copyrights could not be cleared and the set was never published. All that remains of it is an ad published in the July ’05 Hobby Japan magazine. Click here to see the ad. Below is Itabashi’s intricate cutaway drawing of the Great Yamato, the last the world would ever see of it.