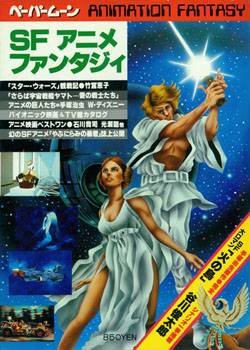 Since the publishing for Space Battleship Yamato was largely an experiment in content and format, almost everything produced for the sequel provided proof of concept. The demographics of the audience were much better understood, quality control was firmly in place, and viable formats were ready to be re-used. What’s more, the arrival of anime specialty magazines (starting with Tokuma Shoten’s Animage) opened up a medium that was previously dominated by manga and TV magazines. Before long, every major publisher had its own component in each category. As before, the demand for Farewell to Yamato was the engine that drove the entire industry into new territory.

Not included in this bibliography are manga titles, novels, and special publications from Office Academy. Links for all of them can be found at the end of this page.

At right is the first book to include any Farewell coverage, the “Paper Moon” SF Animation Fantasy special. Published by Shinshokan in July 1978, it was one of the first to put anime on an equal footing with such high-profile international fare as Star Wars and Disney productions. Yamato earned only 4 pages out of 136. But it was a start. See the pages here. 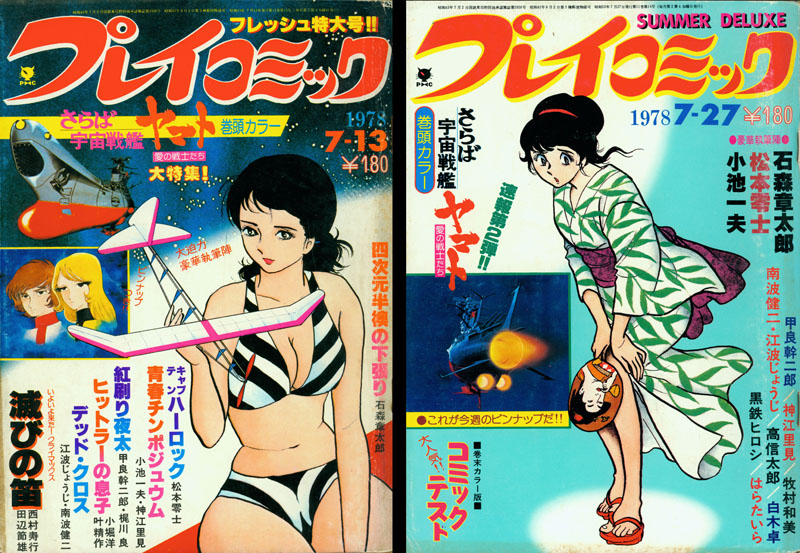 As the final month counted down to Farewell‘s premiere, Yamato appeared again on the cover of Akita Shoten’s weekly Playcomic manga magazine. Each issue (published two weeks apart) carried a 5-page color article and a bound-in poster. The first was two sided (below left and center) with the third backed by a montage of Captain Harlock fan art. 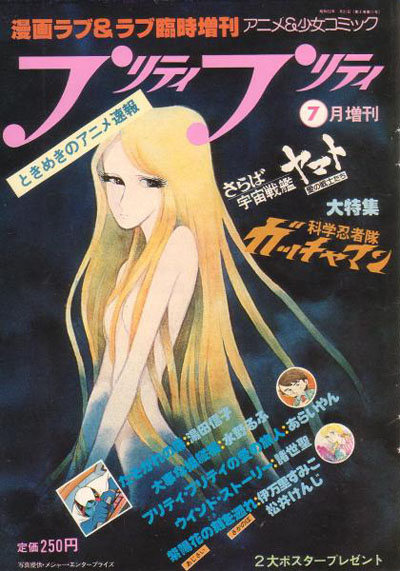 Yamato had a considerable presence in girls’ magazines, reflecting its unexpectedly high quotient of female fans.
Pretty Pretty was among these, mainly a girls’ manga with articles on anime productions. Farewell to Yamato got 20 pages of coverage in this issue, which included an account
of the press conference and various production notes. It also featured a character chart for the Comet Empire that gave Zordar’s age as 43.

Read articles from the magazine here. 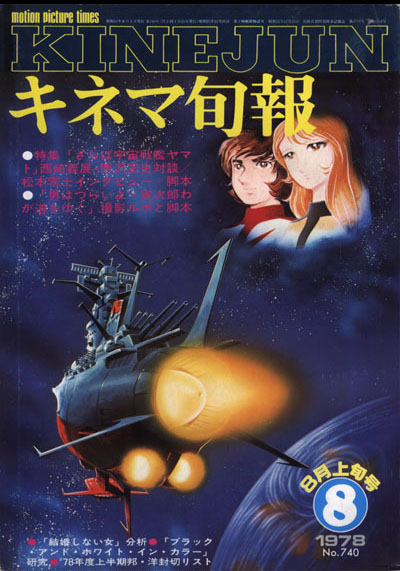 Kinejun was a magazine devoted chiefly to live-action film from around the world, and this may be the first time it carried a cover story on an anime movie. Its unparalleled 44 pages of coverage included color stills, interviews with Nishizaki and Matsumoto, and an almost-complete screenplay for Farewell.

Read articles from the magazine here.

This was a bonus insert in Adventure King, the manga magazine that was serializing Leiji Matsumoto’s manga for Farewell. It offered a brief overview of characters and mecha along with sheet music for the previously-unseen four-verse version of the Yamato theme (see it in full here). The poster artfully combined the two theatrical one sheets into a single vertical image. 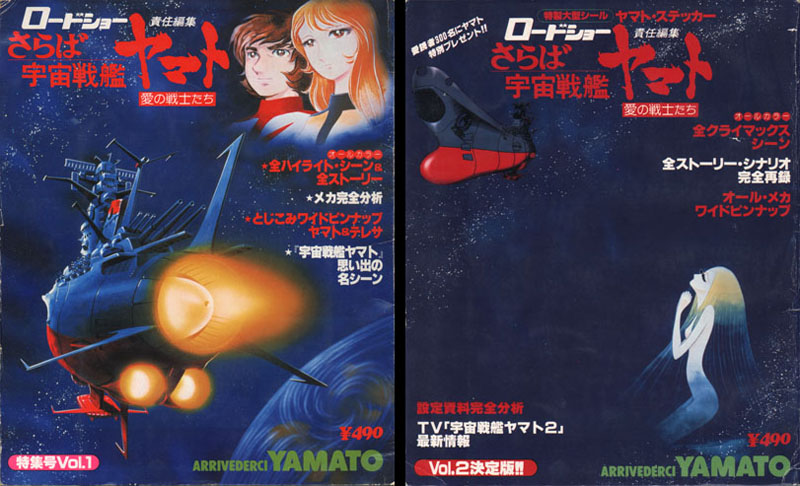 Roadshow was the name of a popular movie magazine published by Shueisha, from which numerous specials spun off to focus on specific films. Farewell to Yamato stood out even from this select group to receive two volumes of coverage that rivaled the best any other publisher had to offer. Volume 1 contained a photostory, the complete screenplay, model sheets, a report on the first 6 episodes of Yamato 2, and product information. With these basics out of the way, volume 2 could delve deeper. It contained a collection of double-page highlight scenes, character and mecha pinups, extensive production notes, model sheets that focused on Yamato and Andromeda, and a full-color photostory of the first movie. 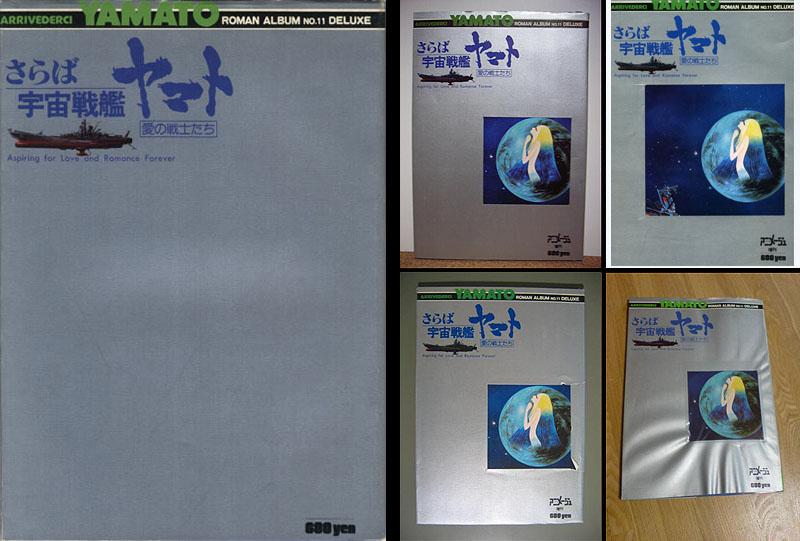 After the debut of their first Roman Album a year earlier, Tokuma Shoten published roughly one volume a month with trendsetting coverage of anime classics like Cyborg 009, Mighty Atom, and Mazinger Z. Volume 11 marked their first return to a franchise and also demonstrated how far they had evolved in a year. Gone was any hint of children’s publishing. Dustjackets were now the norm, along with bound-in collector cards and pinups. The photostory had replaced gallery-style illustrations, and significant space was given over to staff comments and making-of coverage. New material was also being generated to enhance the value of the book, like character flow charts and a double-page cartoon of the animation studio with caricatures. In other words, it was even stronger evidence that the wall between the creators and the audience was breaking down. As seen in the photos above, however, one experiment didn’t go over well; the concept of a window cut in the dust jacket to reveal an image underneath turned out to be a damage-magnet and was eliminated from later printings.

Read articles from the book here. 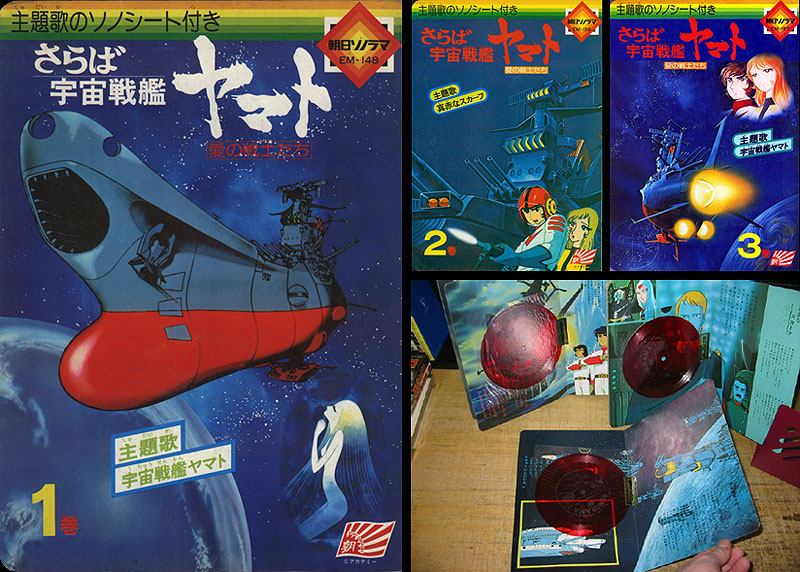 This three-volume set of panel books (printed on thick card stock) retold the story of the film for children, combining simple text with large color stills. “Sonosheet” was Sonorama’s term for a 45rpm flexi-disc of the Yamato theme that came with each volume. 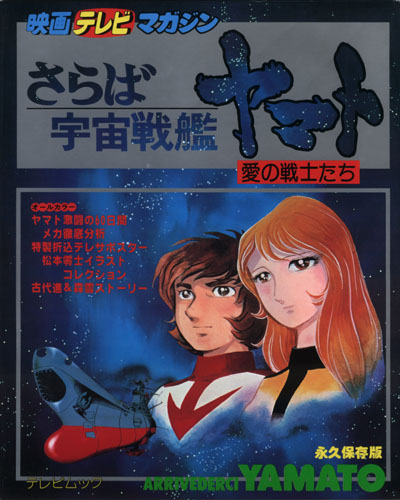 This full-color spinoff of Terebi [TV] Magazine provided an excellent overview of the film organized by subject. It contained a section on Earth’s settings and mecha, enemy characters and mecha, a photostory, the Comet Empire city, art galleries, song lyrics, and highlights of the Kodai & Yuki story. 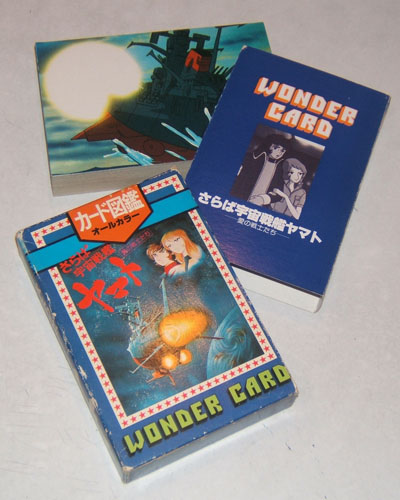 These cards, bound on one edge and contained in their own slipcase, feature major characters and mecha in color stills on one side and descriptive text on the back. A set for Space Battleship Yamato was published simultaneously.

This was a bonus insert in Adventure King, the monthly manga magazine that serialized Matsumoto’s Farewell to Yamato manga. This 2-sided foldout calendar for the first half of 1979 included two Yamato paintings, among others. 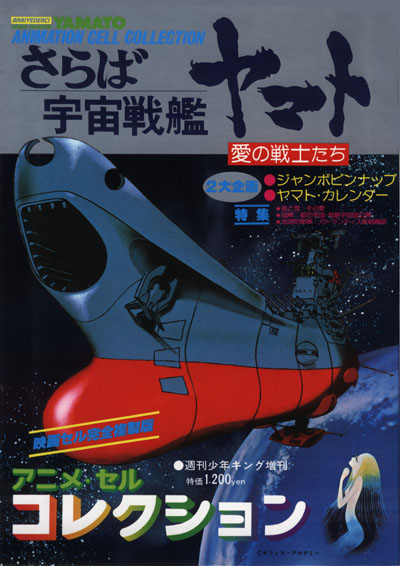 This book was the first of its kind, an innovative collection of pseudo-animation cels with an image printed onto an acetate overlay against a thick cardboard background image. A dozen of these were created for the book, accompanied by a guide to the story. 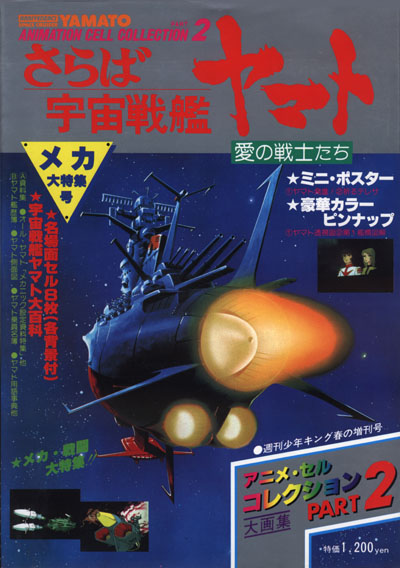 Eight more pseudo-cels were featured in this followup volume, along with an extensive mecha catalog and encyclopedic coverage of the first two Yamato movies. Of special note was a foldout poster with a 1979 calendar on one side and an exclusive Yamato cutaway painting on the other.

This was the first of its kind, a set of build-it-yourself models printed on cardstock that built up into replicas of Yamato, Analyzer, a Cosmo Gun, Dessler’s Battleship, a Comet Empire Missile Ship, and Zordar’s Dreadnought. They were not as fully-dimensional as Shogakukan’s “papercraft” models from 1983, but made up for this with variety. See the pages of this set’s instruction book here.

This one-of-a-kind package was essentially a set of mini-posters from Farewell, all of which can be seen in our Farewell to Yamato gallery. Though it was labeled Panel Book No. 1, it is unclear whether Keibunsha produced any more. 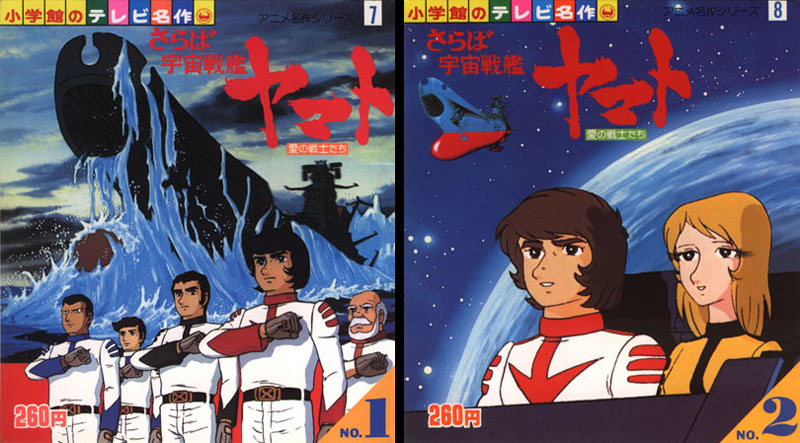 This all color, two-volume retelling of the movie was formatted with minimal text and color stills. Shogakukan utilized this format for many other children’s books based on movies and TV shows, including both anime and live-action. There were a total of 7 Yamato volumes up to and including The New Voyage. 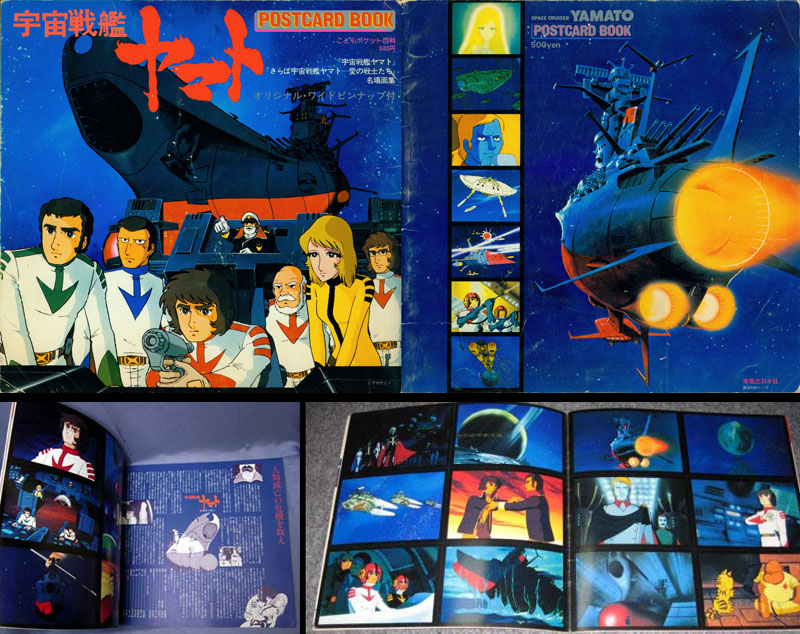 This book brought together images from the first series and Farewell to Yamato, along with basic story information for each. The character art on the cover previously appeared in Office Academy’s Yamato calendar for 1980 (published in fall ’79). 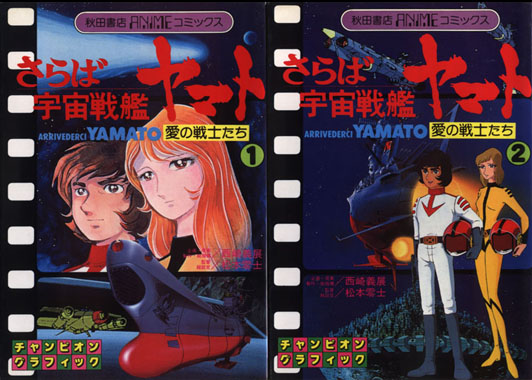 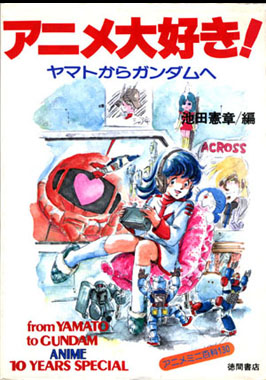 This 2-volume set from the Champion Graphic division of Akita Shoten retold the story of the film in anime comic form, color stills with word balloons for dialogue. Other volumes were published for the first movie and Be Forever. Read more about anime comics here.

This excellent book by pop culture writer Noriaki Ikeda was the first and best memoir of the beginnings of modern anime fandom from the early 70s through roughly 1980 when Mobile Suit Gundam exploded the medium. Read the Yamato chapters of this book here.

Continue to the Yamato 2 bibliography