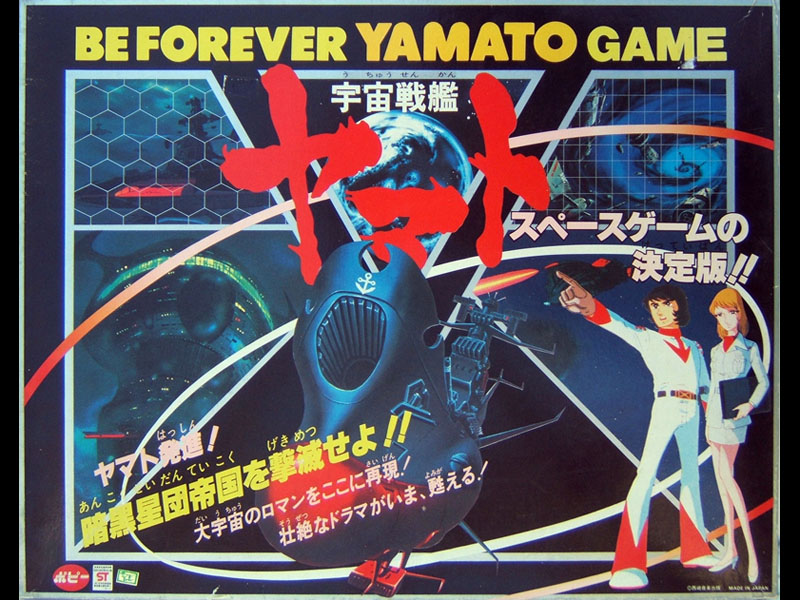 In the year 2202 AD, the Earth was at peace. However, an invasion from a distant star broke the silence. The journey begins again for Yamato to save the human race, aiming at the far Dark Nebula, 400,000 light years away…

Turn the roulette to move out into space, and your trip begins! The enemy’s third fleet will chase you. The great, fierce battle of the Dark Nebula. The destination is the stronghold of Earth’s invaders. The enemy is defeated and the Sargasso must be escaped. The last enemy ship waits for its showdown with Yamato, which must hurry back to Earth.

These breathtaking thrills are reproduced in this board game! Who will prevent the extinction of Earth?

So reads the blurb on the box, and it just barely hints at what awaits inside. 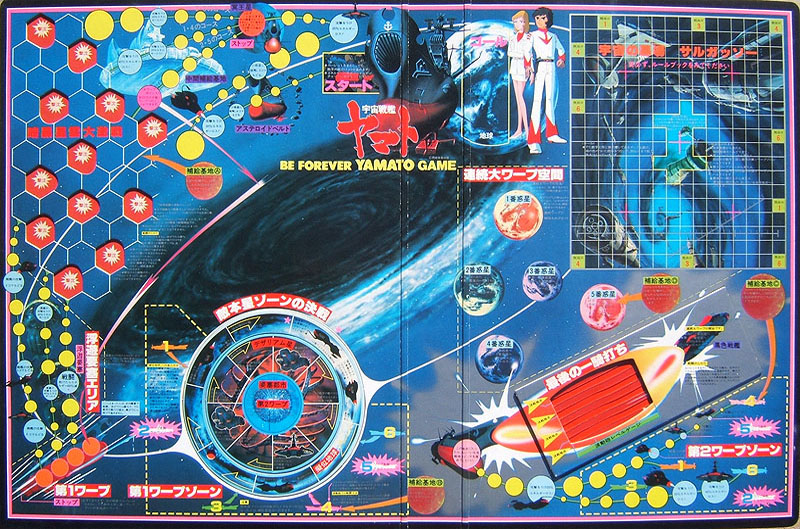 The Be Forever board game was a constant challenge to maintain your ship’s energy levels against an onslaught of Dark Nebula forces determined to chop you down to size. The board was broken down into ten mini-games, any one of which could stop you dead in your tracks—or worse, land you in the Sargasso Sea of Space from which you had to inch your way out to rejoin the fray.

We’ll start with a look at the individual components:

The six Yamato game pieces were made of gum-rubber, the same stuff Popy used for its larger gummy Yamato toys, which can be seen along with the rest of their lineup here. The energy gauge (above center) was constantly adjusted as your fortunes on the game board rose and fell, and everything turned on the roulette wheel, which had the dual purpose of telling you how far to advance and occasionally sending you to numbered points from which you would continue your progress.

The directions, naturally, proved the worst obstacle of all for a non-Japanese reader. Nevertheless, you can look through them
here. The cardboard game chips (at right) were for two specific mini-games and either helped or hindered you depending on the luck of the wheel.

With the components out of the way, let’s walk through the game itself. 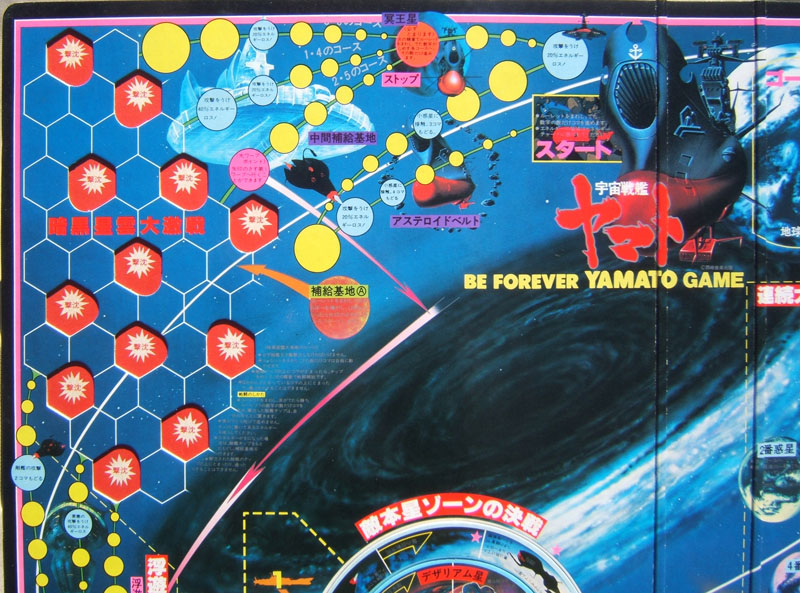 Phase 1 of the game is titled “Escaping the solar system.” Starting to the left of Yamato, players bust out through the asteroid belt, zigzag back up (gaining or losing energy in the process) then pause at Pluto (above center, behind the orange circle). A spin of the wheel sends you on one of three different courses past the Dark Nebula’s supply ship. If you’re very lucky, you spin a 2 or a 5, sending you down the lowest course. If you happen to land on the pink circle you get to warp away (following the pink arrows) down to the lower corner of the board.

The other two courses send you into the “Great Fierce Battle with the Dark Nebula,” the field of hexagons at the left of the picture. This is where the dark blue spaceship chips go, to be knocked out one by one if you’ve got enough energy to take them down. Travel is omnidirectional, and if you happen to land on the hex containing the planetary supply base (the orange world labeled ‘A’), you can replenish all your energy.

Finding your way through this field is one thing; getting into the next zone is something else. 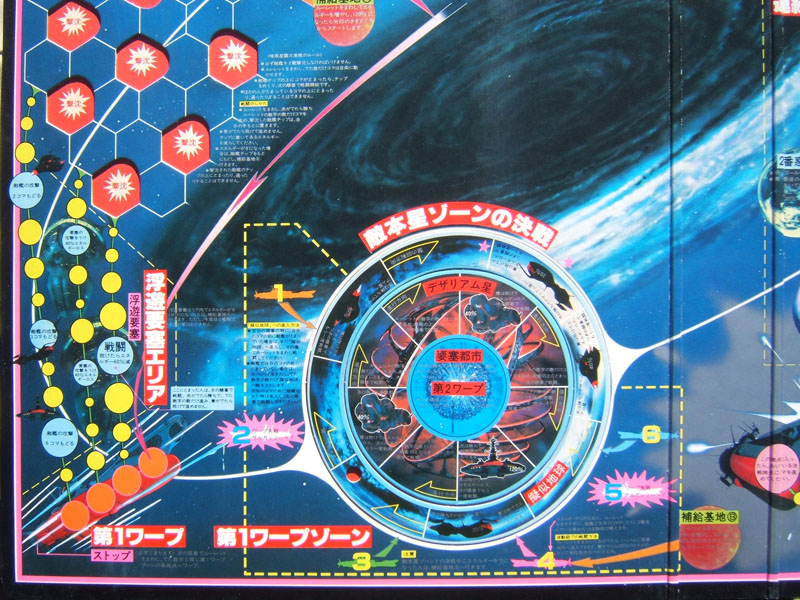 Waiting for you at the lower end of the hexagonal battlefield is the “Floating Fortress Area,” where the Gorubas and other ships will drain you of much-needed energy if you land on the wrong spot. But if you make it to the bottom corner a whole new phase of the game begins with the “First Warp.” Pausing at one of the orange circles, you spin the wheel to enter the “First Warp Zone,” which contains a circular field labeled, “Enemy World Zone of Decisive Battle.”

This is truly a game within a game, and worthy of a closer look… 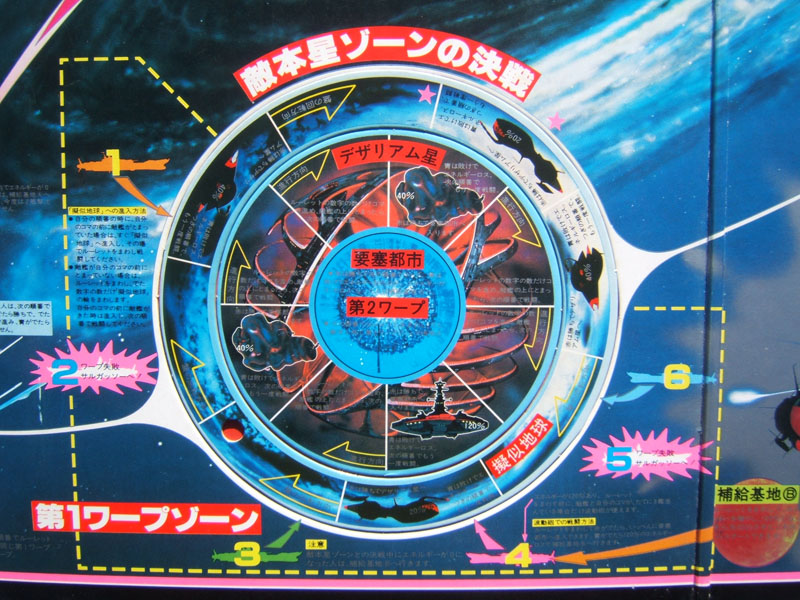 Whichever number comes up on the wheel tells you where to enter the circular field; points 1, 3, 4, and 6. If you’re very lucky, you start from point 4 where another planetary supply base gives you a full powerup. If you’re very unlucky, you’ll get a 2 or 5. More about that later.

The outer ring of the field spins once per turn and you make your way around it, fighting enemies and losing energy. If you land on the space with the red label (“Pseudo-Earth”) you can enter the inner ring and duke it out with Dezarium where the energy demands get much higher. Reaching the center gives you a win and bounces you into the next phase of the game, the “Second Warp.”

That’s what happens if you’re fortunate enough to get into ring at all. If your number comes up 2 or 5, your job gets much harder—you get bounced into the Sargasso Sea of Space. 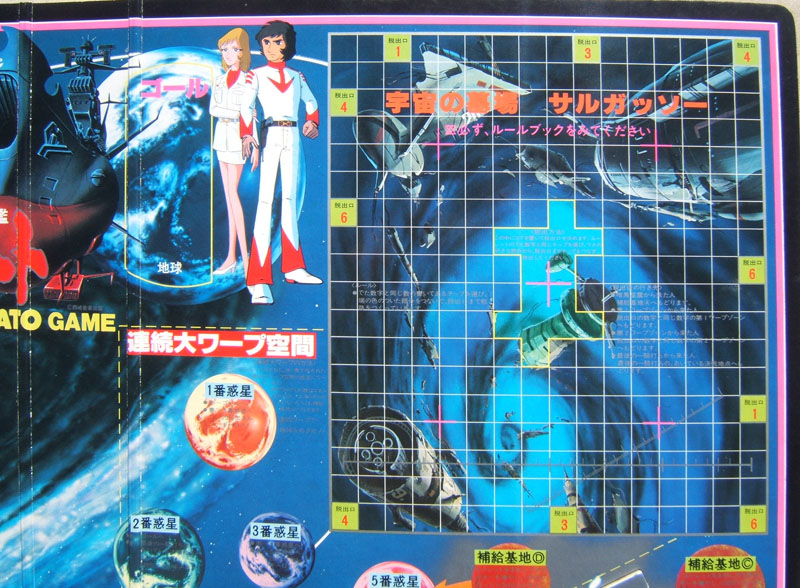 The Sargasso is a grid that you have to inch your way out of–literally. Starting from the center, you spin the wheel and win one of the white & blue game chips (pictured earlier) which are tiled together as a bridge across the grid. A 2 gets you across 2 spaces, a 4 gets you 4 spaces, etc. It’s something like hopping from stone to stone until you reach the other side of a river. But the goal is to precisely hit one of the numbered squares on the outer edge, which will throw you back to the corresponding entry point for the “Zone of Decisive Battle.”

So let’s say you’re lucky enough to survive all that. What’s next? 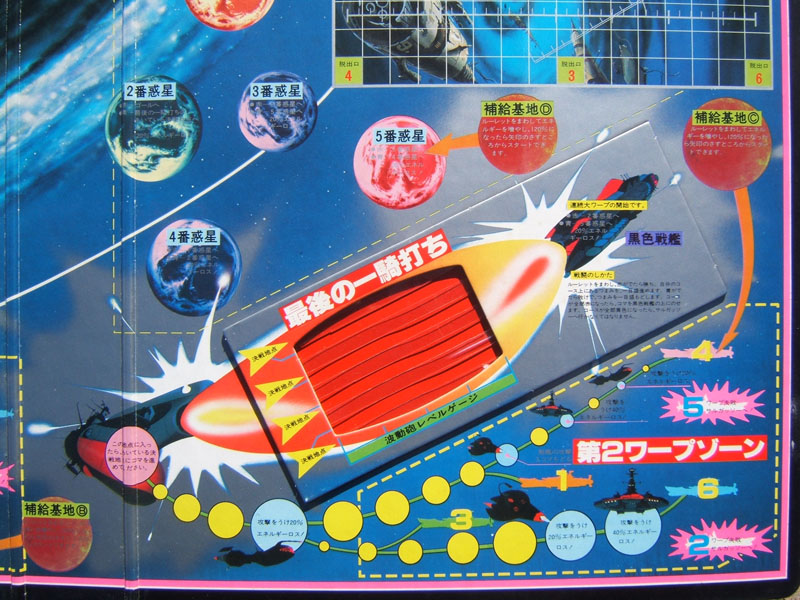 Finishing off Dezarium allows you to jump to the “Second Warp Zone,” the area in the lower right corner inside the dotted line. As before, you spin the roulette wheel to find your starting point, numbered 1-6. And as before, you better hope you don’t get a 2 or 5, or you’ll be sent back to the Sargasso Sea. (Though when you find your way out of it, you do return here.) And if you can get the lucky 4, which is ironically an unlucky number in Japan, you land on another planetary supply base powerup.

Fighting your way out of the “Second Warp Zone” (traveling right to left), you make your way to the pink circle on Yamato, where a new phase begins called “The Last Single Combat.” This time, it’s one-on-one against the Dark Nebula flagship. The struggle is measured in the red energy gauge box by sliding yellow tabs (not shown) back and forth until Yamato is dominant.

The final phase of the game takes us up through the field of planets, an area labeled “Continuous Large Warp Space.” This time, the simple act of traveling from planet to planet based on wheel spinning drains you of energy (though the 5th planet has a supply base that can boost you up again.)

The goal is to reach planet number 1 (seen here at the lower edge of the picture), which is just one step from Earth at the top and word “GOAL” in pink. The right combination of remaining energy and a lucky spin will carry you to victory.

And if you’re not completely exhausted, the “START” space is just a few inches away.

2 thoughts on “Be Forever Yamato Board Game by Popy”