Yamato games of the Legacy Years

When we last left our heroes, games based on Space Battleship Yamato had just made the jump from paper to pixels, but only to the level of an extremely simplistic LCD game in 1983. Nine long years would pass before the next step down the digital road was taken, but there was one interesting stop along the way…

A new form of arcade game appeared in the mid-80s that combined fledgling computer graphics with the then-revolutionary video capacity of the CAV laserdisc, and for a time they dazzled players with the most life-like special effects imaginable. Industry giant Taito produced a Yamato LD game in 1985 based on Final Yamato, which unfortunately never migrated to a home platform. Thus, it faded into history along with all other games in this category. But there’s still much to be said about this sidetrack on the road toward modern electronic games. Read a detailed description of the Laserdisc game here. 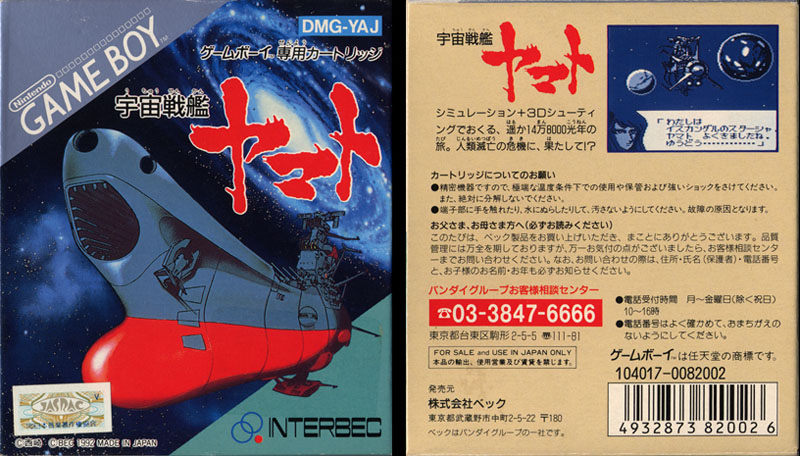 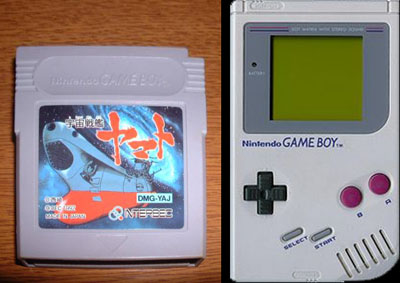 First out of the starting gate was Yamato for the Nintendo Game Boy, a handheld cartridge-based system that made its debut in 1989. As video games went, it was about as basic as you could get; a roughly 4″ square black & white picture with highly simplified 8-bit LCD graphics and MIDI-style audio. By today’s standards, “primitive” is a compliment. But in 1992, it was the first chance to experience the Journey to Iscandar in a fully-interactive environment. Crewmembers would issue instructions and it would be up to you to shoot down enemy ships, warp from one stage to the next, and get your hands on that Cosmo DNA. Incidentally, the Interbec company was another subsidiary of the all-knowing, all-seeing Bandai.

These screen shots are from the first stage of the game, and represent the overall style…

After a long text scroll (in which every letter appears in its own sweet time), Captain Okita says “Yamato Hasshin” and the game is on. The first task is to get the ship past a Gamilas blockade on its way to takeoff. Much like a non-electronic game, you alternate turns against the CPU. By selecting and moving Yamato or a Black Tiger squadron a few spaces at a time, you bump into the enemy and the shooting starts…

Ironically, this is one part of the game you have no control over. A challenge is issued and the CPU takes over in a digital rock/paper/scissors match. This repeats until one side or the other loses all their ships. If Yamato issues a challenge, the screen shifts to a first-person shooter (2nd from left) against Gamilas ships. If you can nail them all before your damage maxes out, you win and the game resumes. But if the Black Tigers get whittled down to zero, Dessler takes over the Earth and…well, you know.

Special thanks to superfan Steve Harrison for info and reference. 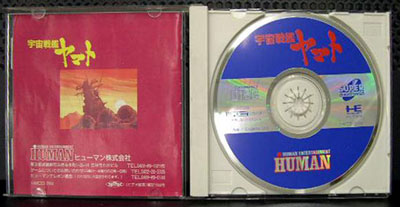 Just five months after the Game Boy cartridge appeared, players could upgrade to a more powerful, full-color Journey to Iscandar with more bells and whistles. It was a CD-Rom manufactured for NEC’s PC Engine, an 8-bit console (with a 16-bit graphics chip) that predated the Game Boy by two years. It was also noteworthy for having a fast enough CPU to play CD-quality audio and put motion graphics on the screen at the same time, several years before the arrival of Sony Playstation. The system was marketed in the US as the TurboGrafx-16 before losing out to the more robust Nintendo Entertainment System.

The story is broken into 9 stages (just as the movie was cut down from 26 episodes) that take the player through all the major plot points with a mixture of limited animation and gameplay. The color stills shown below give a sample of the overall look.

Click here to see the instruction booklet from cover to cover. 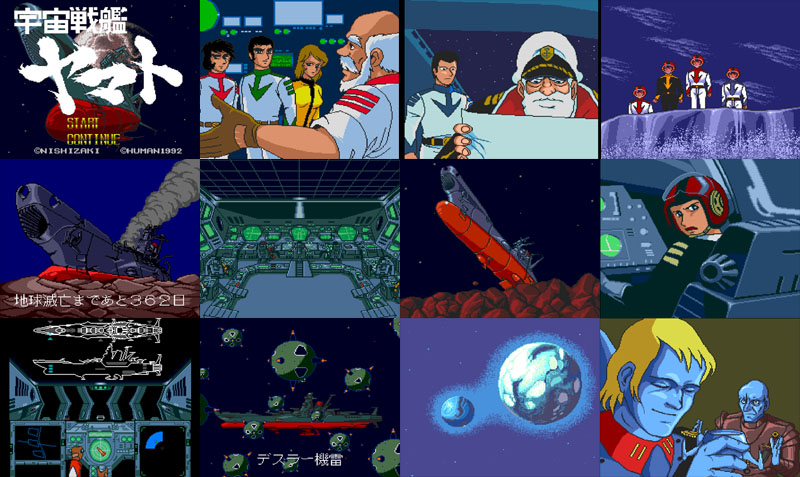 Online emulators for this game system exist for both PC and Mac, but a downloadable ROM for the game itself has yet to be located.

More info on this game

Together, the Game Boy and PC Engine games were your only Yamato options for the next six years. Seeing what replaced them at the end of that stretch speaks volumes about the advancement of video game technology.

Special thanks to Bill Nessanbaum for info and graphics from this game. 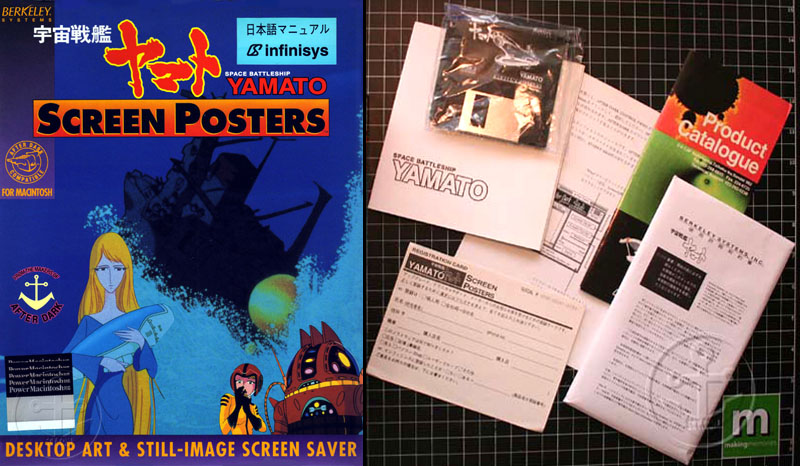 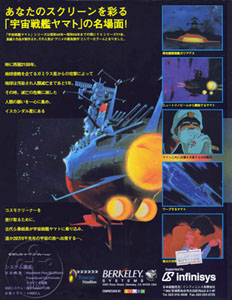 Now that Yamato had entered the computer software age, this unusual product was the next to appear. Screen savers were common in the days when computer moniters were more delicate, but Japanese screen savers exclusive to Macintosh must have been a rare bird, indeed. The documentation inside the box was entirely Japanese, but the all-English box front was probably an artifact of the early-90s push to revitalize (and internationalize) Yamato.

The floppy disc in the package contained 40 full-color “Screen Posters”
which can be seen here.

Special thanks to spacecruiseryamato.com for this find! 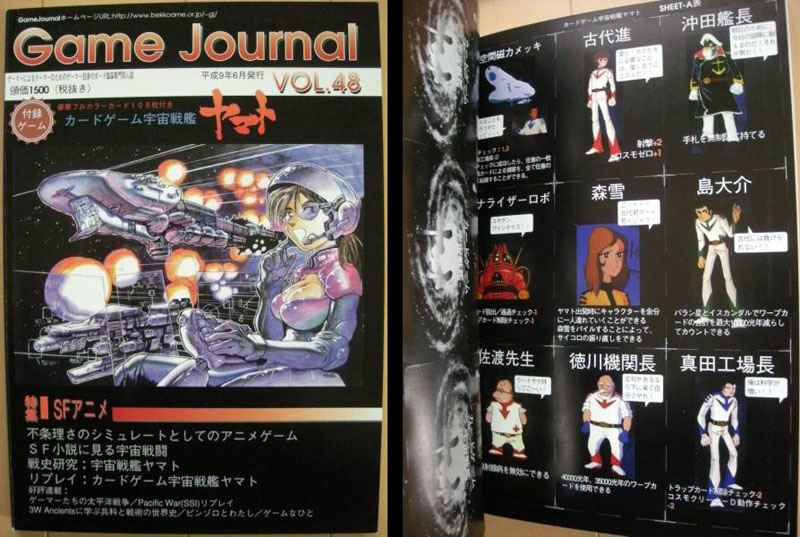 There came a time when the world of desktop publishing met the world of doujinshi [fanzines] and it gradually became harder to differentiate the fans from the pros. This was an early example of games made by fans for fans, in this case in the pages of a small-press magazine. It contained an entire Yamato card game that now resides in the collector’s item category.

Processing power doubled and redoubled throughout the early 90s, reaching 64-bit by December 1994 and resulting in the world-changing Sony Playstation. A little over four years later, Yamato made its triumphant return and set off a whole new chain of events under the watchful eye of Leiji Matsumoto. The most prominent of these was a trio of games that created a huge sensation, loaded with new animation and multi-layered gameplay.

The strategic nature of the games placed them in a text-heavy environment that made them impenetrable to most English-speaking players, but the gorgeous design and attendant merchandising nicely balanced the scales.

Detailed coverage of these games can be found here and includes three production interviews. 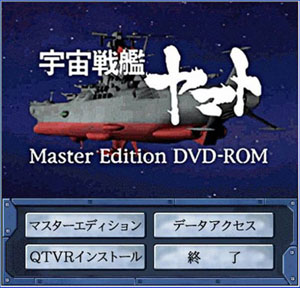 Hot on the heels of the first Playstation game came something truly one of a kind: a virtual Yamato that you could explore at will. Though not strictly a game, it was a huge leap forward in terms of interactivity. Spread across four CD-Roms, it allowed the user to walk through six fully-modeled areas of the ship: the main bridge, captain’s quarters, Dr. Sado’s office, the Wave-Motion gun, the engine room, and the hanger deck. Most rooms came cleverly equipped with access to anime clips, character and mecha databases, and more. A separate bonus disc contained sound clips and CG galleries.

Now that the Master Edition is over ten years old, it definitely shows its age in terms of data compression and picture resolution (and for that matter, the interface doesn’t work at all on newer computers), but it is still a completely immersive and enjoyable experience.

Naturally, it’s worthy of a much more detailed examination, so click here for a visual tour and an interview with the producers.

Strictly speaking, this isn’t a Yamato game, but it’s a close relative. Zero is a spinoff of Leiji Matsumoto’s Galaxy Express/Captain Harlock mythos, and since this game appeared during his brief tenure as a Yamato copyright holder, Matsumoto was looking for all sorts of clever ways to tie stories together. In this case, one of the characters was a robot named “Battle Analyzer,” and according to his loopy programming he had a long-lost brother somewhere out in space on a legendary battleship. Just to add another level of crazy, “Battlyzer” could transform into a Super-Deformed version of Yamato to fly through space. You have to see it to believe it.

Seeing it is not out of the question for those with the resources and determination. The game can be still be found and played on a properly-modified Playstation console. Since it’s a first-person shooter rather than a strategy simulator, the language barrier is almost nonexistent and the gameplay is very easy. The Yamato connection goes like this…

Flying through the galaxy in his “spaceship mode,” Battlyzer intercepts Warius Zero’s ship the Fire Dragon and asks if it is the legendary Yamato. When Zero denies it, Battlyzer blows a gasket and challenges him to a duel. (Which is where the gameplay comes in.)

Afterward, Battlyzer tumbles off the Fire Dragon and turns back into his “spaceship mode.” Running out of energy, he crash-lands on a forlorn desert planet. Look familiar?

Some time later, the shadow of a magnificent space vessel passes over the tiny wreck. With his last remaining energy, Battlyzer calls out: “Analyzer! Brother!!!” But the great ship moves on. Finally drained, Battlyzer fades, ejecting a small capsule.

It sends out a constant message: “Yamato…Yamato…Yamato…” Until, one day, a slender female hand reaches out for it. The hand belongs to a beautiful young woman in a yellow uniform. (The End)

As a side note, Cosmo Warrior Zero was also made into a short-lived 2001 anime series (with Battlyzer as a cast member) which was imported to the Western world by Media Blasters. Ebay awaits!

Another almost-Yamato artifact from this timeframe was a PS game that combined the different worlds of Leiji Matsumoto as they’d never been combined before, at least outside the pages of manga. This was a strategy game following the Galaxy Express characters through a very text-heavy environment (sorry, English speakers) that took all sorts of twists and turns through the Matsumoto universe. Yamato, an inexplicably blue Analyzer, and Starsha all made appearances, very likely in lockstep with the Galaxy Express manga of that time. See a sample of it here.

Like Cosmo Warrior Zero, this game can run on a Playstation console that has been “chipped” for Japanese discs. Unlike it, however, the language barrier is a significant handicap against non-Japanese speakers.