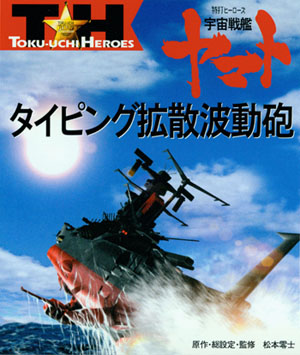 The third and final typing game is the best of the bunch, brimming over with creativity and visual dynamism. It is also the single most expansive Yamato game ever made, covering the saga from end to end with (as yet) the only video-game coverage of Series 3 and Final Yamato. The cutscenes are also a major step up from previous efforts. The Character animation is only average, but the space battles are extraordinary and the addition of ground battles—particularly the Dark Nebula invasion of Earth from Be Forever—delivered some of the best CG in Yamato history prior to the 2009 resurrection. 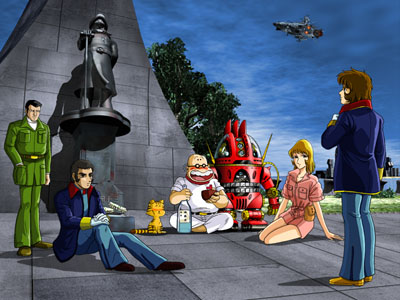 The main menu this time is an image of Hero’s Hill with the characters gathered under the monument to Captain Okita. Again, rolling the cursor over each one takes you somewhere else. 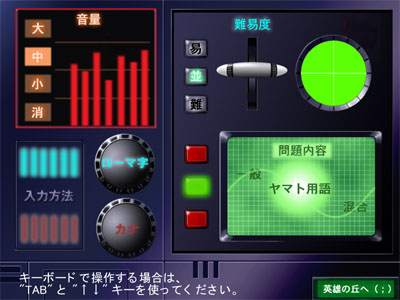 Sanada is in charge of the game options, allowing you to adjust volume and pick your keyboard. 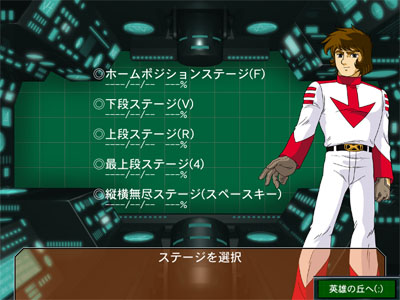 Kodai runs the training room this time, supervising your performance in the same shooting gallery used in the previous games. 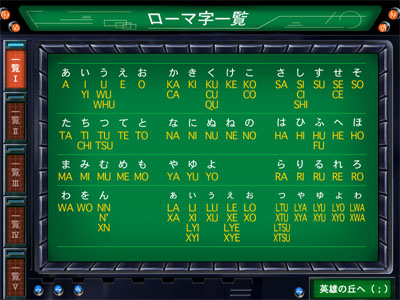 Analyzer is still your translator, showing you which keys correspond with which letters in both English and Hiragana. 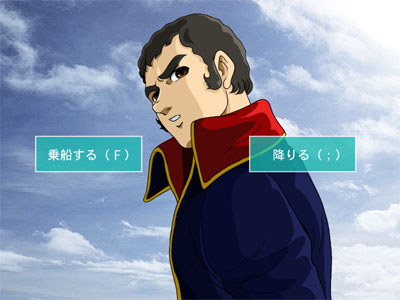 Reprising his conflicted role in Series 2, Shima gives you the option to quit and walk away. Yuki reprises her role as the scorekeeper once the game gets started. 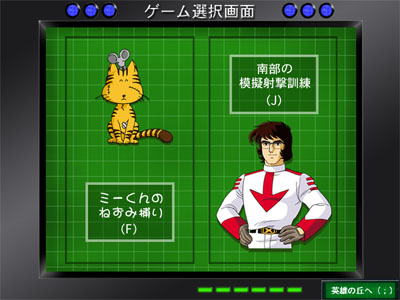 Dr. Sado is a new character in this game’s menu, and he takes you to a new section: bonus games. On the right we have Simulator Target Practice run by Nanbu (Dash) in which spaceships fly in and you type their names to blow them out of the sky. On the left is another game entirely…

Mousecatcher Mi-kun! Dr. Sado watches as mice with letters and numbers on them stampede past Mi-kun, who can only catch them if you type the right character. If any of them get by you, Sado reads you the riot act. 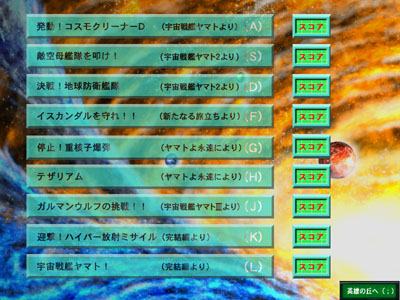 Clicking on the statue of Captain Okita takes you to the nine missions which span the entire Yamato saga. As with Typing Warp, all are accessible at all times. 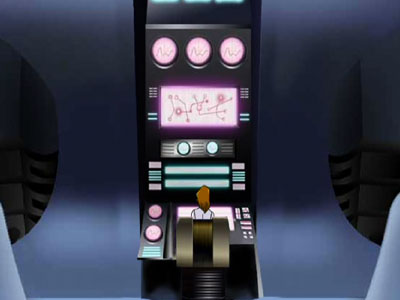 The first mission takes us right back to Typing Warp with a game we didn’t see there: Yuki has to power up and activate the Cosmo Cleaner before Dessler’s troops poison the entire ship. This, of course, is achieved by typing. 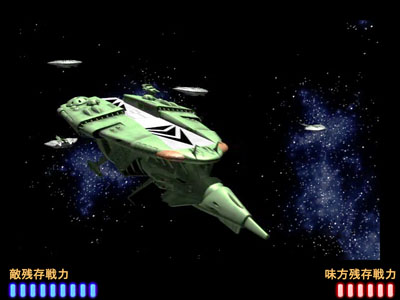 Next we’re on to Series 2 with the first phase of the Battle of Saturn. Yamato leads a task force against the Comet Empire’s carriers and all the fighters they manage to launch before they can be typed into oblivion. 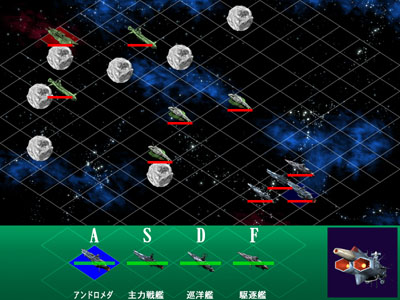 Next comes a combination of new and old concepts; typing software meets tactical simulator as ships are moved into strategic positions from where they can unleash their firepower. 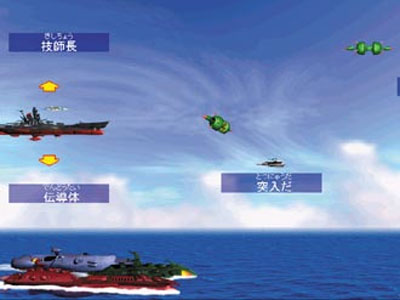 In this scenario from The New Voyage, Yamato assists Dessler’s remaining forces in their sea battle against the Dark Nebulans. This is a side scroller in which typing words above or below Yamato moves it up or down to outmaneuver the enemy. 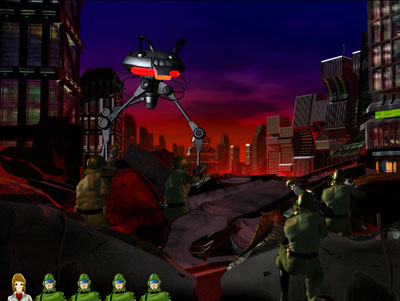 The Dark Nebulans return in Be Forever Yamato and the remnants of the EDF fight back from the scorched rubble of Megalopolis City. Stage 1 pits the marines against fighters, walkers, and air troops. In stage 2, Yuki must defuse the giant bomb. This is where her Cosmo Cleaner D experience comes in handy. 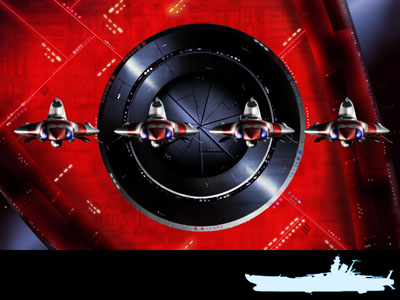 In this second Be Forever scenario, Yamato must fight off enemy ships guarding the entrance to Mechanical Planet Dezarium in stage 1 (shown here), then dodge flying crystalline missiles while charging up the Wave-Motion Gun in stage 2. 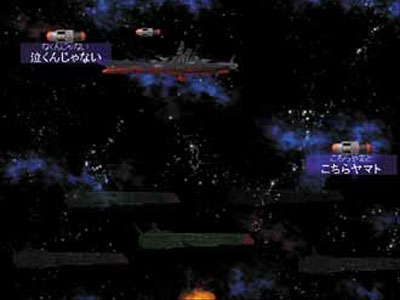 Mission 7: Challenge of the Galman Wolf

In this lone mission from Series 3, Galman Dimensional Submarines attempt to surface and fire on Yamato as it lobs Wave-Motion depth charges at them. Correct typing helps the explosives find their mark. 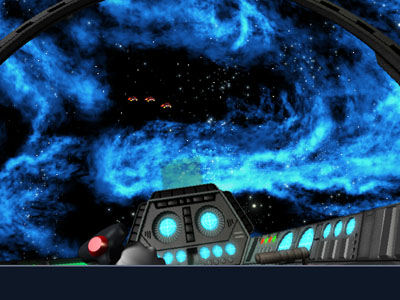 At last we arrive at Final Yamato with a 2-stage mission: Kodai must hold off enemy fighters in the Cosmo Zero and Yamato‘s guns have to take out Denguil Missiles before they strike at EDF support ships. 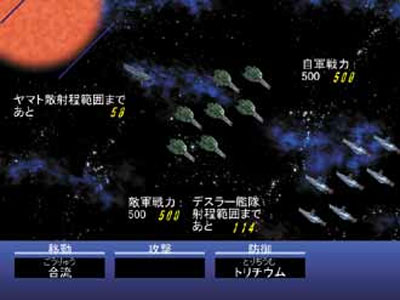 The last battle! Dessler arrives with the Gamilas cavalry to engage Emperor Lugal’s space fortress and remaining fleet. Gameplay in this scenario matches Mission 3, moving ships around to outflank and outshoot the enemy.

And with that, a classic saga types its way to an explosive finale.

Back up to Typing Game 2