In the tumultuous wake of Yamato 2202 Chapter 5, writer Harutoshi Fukui sat down for an interview with Hobby Japan magazine (issue #593) to discuss the approach of Chapter 6. In addition to intriguing hints of things to come, he offered new insights into the different versions of this penetrating story. 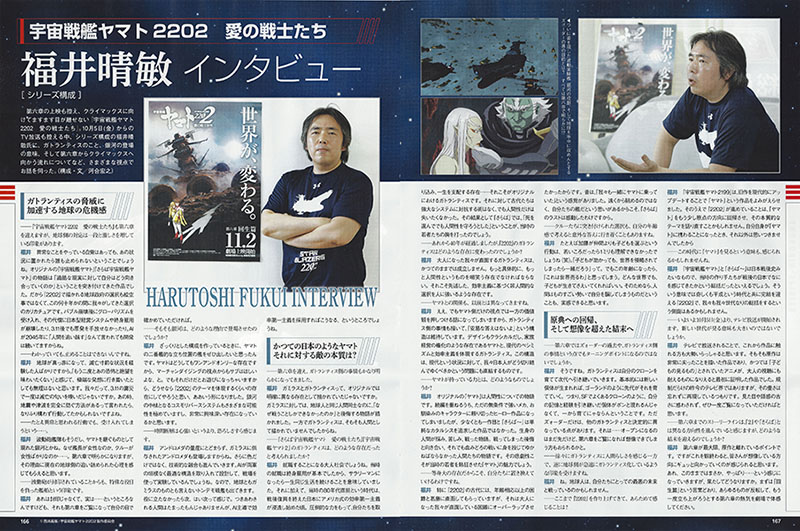 While we keep an eye on the climax as Chapter 6 approaches, Yamato 2202 comes to TV on Friday, October 5 and we hear stories with various viewpoints from Series Writer Harutoshi Fukui about Gatlantis, the meaning of Ginga’s appearance, and the flow from Chapter 6 to the climax.

Earth’s sense of crisis accelerates with the Gatlantis threat

Interviewer: As Yamato 2202 marks its 6th chapter, there is the impression that Earth’s response is getting more intense.

Fukui: Even if there is an awareness that none of this is normal, no one can stop it once they’ve been put into such a situation. The story of the original Space Battleship Yamato and Farewell to Yamato was, “How do you face harsh realities?” It was a work that stuck to that. So the choice of the Earth Government in 2202 isn’t a fantasy, it’s a caricature of the choices we’ve been making for decades.

We embraced globalism after the bubble collapsed, and the cost was that both the Japanese-style management system and the concept of lifetime employment collapsed. Even after the 3/11 earthquake, we cannot part with nuclear power plants. Now it is said that if the development of AI continues, it will “surpass humans” in 2045. 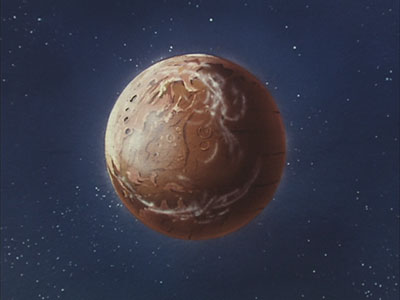 Interviewer: Even if you understand it, you can’t stop it.

Fukui: The Earth turns bright red and people experience a situation just before extinction. Even if you’ve arrived at an extreme idea, I don’t think it’s unreasonable to say, “I don’t want to taste fear and despair any more.” We even caught the scent of extinction from the 3/11 earthquake disaster. If we’d been told at that time that there was a way to completely prevent earthquakes and tsunamis, we might have acted upon it without hesitation.

Interviewer: Accepting it even if it seems to be abnormal…

Fukui: You might be wondering why the captain and crew of Ginga, which appears as part of the Wave-Motion fleet as Yamato’s successor, are women. This will become clear in Chapter 6, and for that reason I think you’ll feel the Earth side’s psychology of feeling cornered.

Interviewer: Based on the fact that its Wave-Motion Gun is sealed, it has the impression of a ship that takes on a special role. 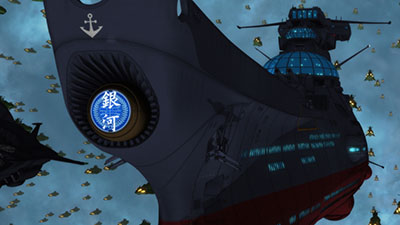 Fukui: That’s not a seal, actually…there is something there, and you’ll see it with your own eyes in Chapter 6.

Interviewer: What’s the reason for Ginga to appear in the first place?

Fukui: When I made up the rough composition, I definitely wanted to feature a second ship with Yamato’s standing. Yamato has a one-and-only presence, but I also wanted a sub from a merchandising perspective. It would just be a joyride if that’s all there was to it, so I intend for it to embody the theme of 2202. Therefore it took on such a form. Ginga’s core Cosmo Reverse System has a variety of possibilities. I think it will have a very interesting presence. 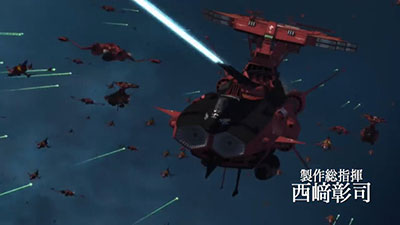 Fukui: There’s not just the mass-produced Andromedas, but Andromedas given to Garmillas will also appear. Furthermore, a technical fusion advances along with the color. Its AI adopts the most optimal structure without the boundaries of either military, so it’s experimenting in the battlefield. The result will be a demo battleship that cannot be called either Earth’s or Garmillas’. What comes next is a feeling of worthlessness. If people don’t come together, and instead adopt the efficiency of AI leadership, that’s what will happen.

How is the nature of Yamato’s enemy like the former Japan?

Interviewer: Now that Chapter 6 is coming, the circumstances on the Gatlantis side have become quite clear.

Interviewer: What kind of presence did Gatlantis have in Farewell and Yamato 2?

Fukui: It was an adult society where you will find a job. Lifetime employment was the basis for finding work at the time. When you became a salary man, you expected to continue that way for the rest of your life. In addition, in the time just before the 80s, the first principles of America-style efficiency had begun to spread in Japan after postwar reconstruction. 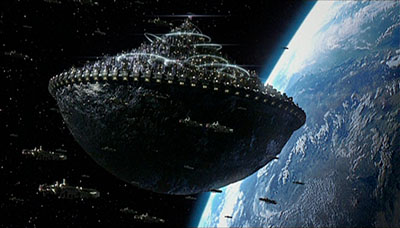 We were swept up in that overwhelming power, which had a presence that dominated our lives…that was the original Gatlantis. On the other hand, Kodai and the others had no way to counter that mighty system, but they didn’t want to lose their humanity. As a result, Farewell’s message to young people’s hearts at the time may have been, “I will try to protect my humanity by choosing death.”

Interviewer: Forty years have passed since then, so what is the Gatlantis of 2202?

Fukui: The Gatlantis we face as adults isn’t what it used to be. It has to have an aspect that laughs at human nature. That’s the kind of presence that forces people to make an inhuman choice based on the principle of efficiency I mentioned before.

Interviewer: The relationship with Yamato is also different from the past, isn’t it? 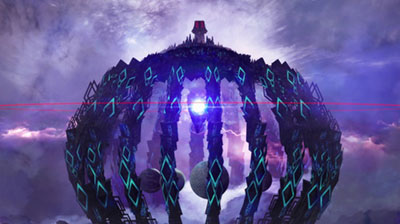 Fukui: Yes, but from the viewpoint of the Yamato side, it becomes a story of pressing one’s sense of values, and the structure is maintained by depicting circumstances on the Gatlantis side as, “There are no easy answers.” The design is also classical with Yamato feeling like a family-run operation and Gatlantis embodying modern efficiency and pessimism. This structure, in the context of the modern age, is directly related to the question of how we Japanese should retaliate.

Interviewer: What kind of power does Yamato possess?

Fukui: In the original, Yamato was a story about humanity. As the sequels piled up, was it merely about unconditionally strong mecha, or did it become a hero work that relied on familiar characters? At least the first Yamato and Farewell were not works that pursued a simple catharsis. It was a story in which flesh-and-blood human beings worried, suffered, and fought. They were confronted with regrets over that fight, but it was a still a story of human beings who had to devote themselves to a bloody battle. It might be the tragic nature of Yamato that held such fascination for youngsters at the time. 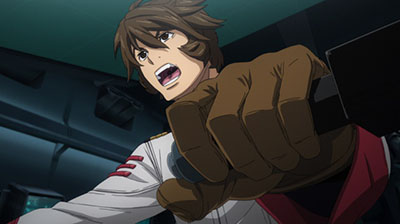 Interviewer: Because it wasn’t a larger-than-life presence, we could place ourselves in it.

Fukui: In 2202, Kodai in particular has been confronted by difficulties and conflicts beyond those appropriate for his age, which overlaps with the difficulties we face when becoming adults. That’s what I wanted to do with it. In the old days, there was a sense of, “We’re all riding on Yamato together.” The ending of Farewell was so moving because the thought was that this is our ship, not something we look at from afar.

Interviewer: When you’re at a very tender age and you think of the choice that was forced on the crew, you may arrive at an unexpected answer. 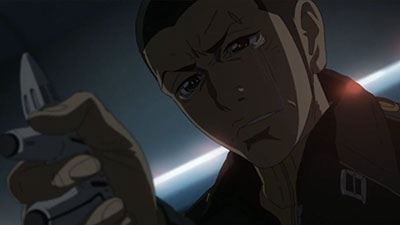 Fukui: For example, the behavior of Kato to choose his child over his friends is something I couldn’t understand even one millimeter of when I was young. (Laughs) When I was that age, I thought, “Even though that child is saved, you’ll both be together when the world is invaded,” and, “That just sells out the whole world.” But any world is a good one if the child is alive. For that reason, I think you can feel that human beings put tremendous effort into deceiving themselves.

Returning to the original, and an ending that goes beyond imagination

Interviewer: In Chapter 6, will Zordar’s past become a turning point with the situation on the Gatlantis side?

Fukui: That’s right. Gatlantis raises clones to take over the next generation. Basically, if a new individual is born, their predecessor raises it, like Goland did. In other words, unlike clones that are common in SF, individuals who take over their memories and experiences don’t just pop into existence, they have to be brought up from the beginning. 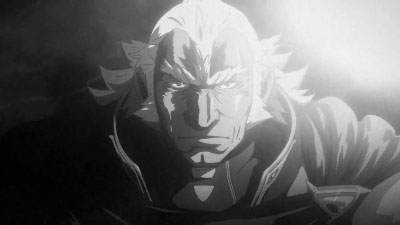 But Zordar has a point that makes him decisively different from others on Gatlantis. It’s still a point to be opened up…some will be able to imagine it after seeing Chapter 6.

Interviewer: It feels like Gatlantis is gradually becoming human, but conversely Earth is rapidly becoming Gatlantis.

Fukui: Right. The Earthlings may be fighting against their own worst future.

Interviewer: Does it feel like you’re making up 2202 from here on?

Fukui: By updating an old work to become contemporary, Yamato 2199 revived the work called Space Battleship Yamato. 2202 advances on top of that, but I’m returning Yamato more to the direction of its origin in order to talk about its essential theme again. When I got involved with Yamato, I couldn’t come up with any idea other than that. 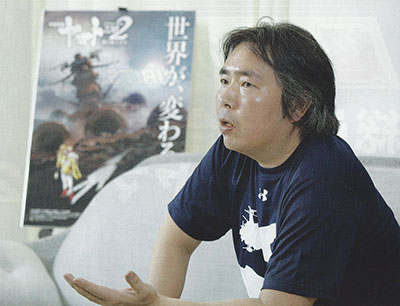 Interviewer: You may also feel the meaning of seeing Yamato in this time.

Fukui: Space Battleship Yamato and Farewell to Yamato are like Japan’s postwar history. It can be said that it summarized what its creators felt about Japan after the war. In that sense, 2202 will coincidentally conclude along with the Heisei period. There may be aspects to it that also summarize our generation.

[Translator’s note: the Heisei period is expected to end April 2019.]

Interviewer: Finally, the TV broadcast will begin on October 5. There may be great meaning in having it seen by a new generation.

Fukui: I think a lot more people will be touched by it in the future now that it will be broadcast on TV. The original was a work that made very sharp points in the first place. Before that, anime was seen as “something only children watch,” and it was the first work that proved it could stand up to adult viewing. The TV world is full of regulations these days, but I haven’t forgotten to reproduce the weight of the original. I hope you’ll watch it without being misled by the old nuances of its appearance. 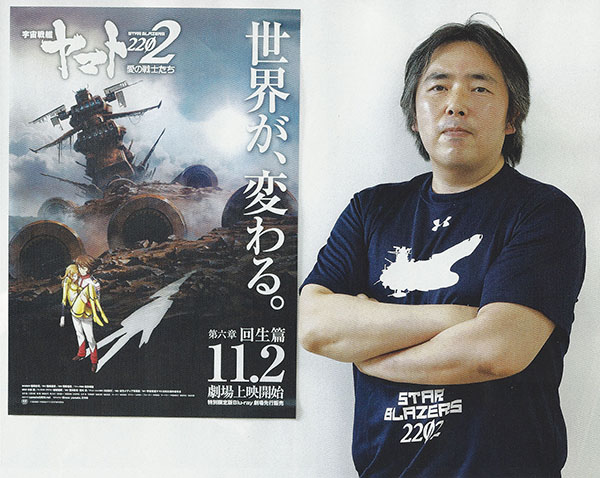 Interviewer: With the storyline of Chapter 6, it feels like we’re going in a different direction than Yamato 2 and Farewell. What kind of ending will it come to?

Fukui: Chapter 6 is the point where it is most different from the original, but when you finish watching it, I think you will feel that it’s going in the direction everyone’s comfortable with. It has a feeling of, “oh, I didn’t expect this…what’s going to happen?” First of all, as the title Regeneration Chapter says, everything will be overturned. Please feel the passion of Chapter 6 when it rises up again in theaters.