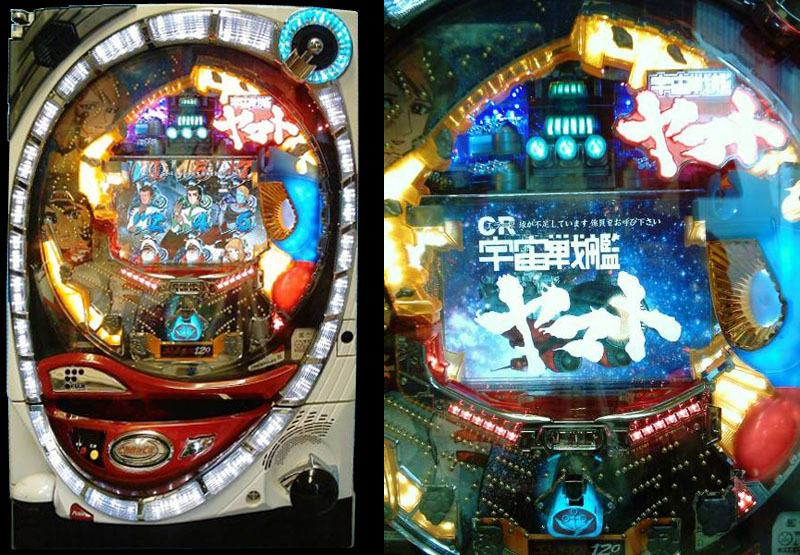 All the Space Battleship Yamato games made prior to November 2007 were meant to be played at home, either on a tabletop, TV screen, or a computer. But that was the month Japan’s Fujishoji Co. finally brought Yamato back to a place it hadn’t been since 1983: the public square.

CR [Card Reader] Yamato Pachinko was one more take on the journey to Iscandar which took the interactivity to Las Vegas proportions. By all accounts, its debut was a very high-profile event with the sort of promotion normally lavished on a movie premiere. Even the console (named “Oval One”) was touted as a revolution in pachinko technology. We’ll start with a look at the game itself and then move on to the fervor that surrounded it.

The video screen in the center of the console is where all the action happens. Most of the gameplay follows the traditional one-armed bandit model with spinning numbers that pay off when they line up in winning combinations. In this case, the numbers are matched to specific characters that pop into action poses when they lock into place. Advancing through the game is based on grabbing the numbers in a variety of different ways related to the background action on the screen.

Some of that action is seen a picture-in-picture frame with original TV footage. Other animation is brand new, a combination of cel and CG that brings a fresh look to the story.

One of the pure-CG creations is a digital Analyzer who pops in from time to time for a point-boosting mini-game called a “reach.” Several of these are sprinkled throughout the main game. The name is probably a reference to the reach for a traditional slot machine leaver, but in this case they are much closer to video games with buttons and joysticks.

Wherever Analyzer goes, silliness must follow. Here are two of the “reach” mini-games, the pursuit of Yuki’s skirt and the taking of the famous “first date” photo. Like the other “reach” games, they can pay off handsomely if the numbers line up just right with three “Kodai 7’s” as the traditional jackpot.

The mechanical features of the “Oval One” console are a good representation of how pachinko games have evolved to include custom parts that interact with the on-screen action. In this case, Yamato‘s bridge and shock cannons light up at certain times to fire a blast across the screen that brings more numbers into play.

But the moment every fan waits for is a chance to fire off the Wave-Motion Gun, which is just one result of a winning combination. The captain gives the order and the stereo sound goes into overdrive along with the requisite lightshow. The player starts button-mashing like crazy, coaxing the two halves of the Wave-Motion Gun to slide together just as the countdown hits zero. Do it right and you get blasted square in the face–a rare honor, indeed.

See almost 10 minutes of the game in demo mode here (The Wave-Motion Gun feature activates at 2:20) 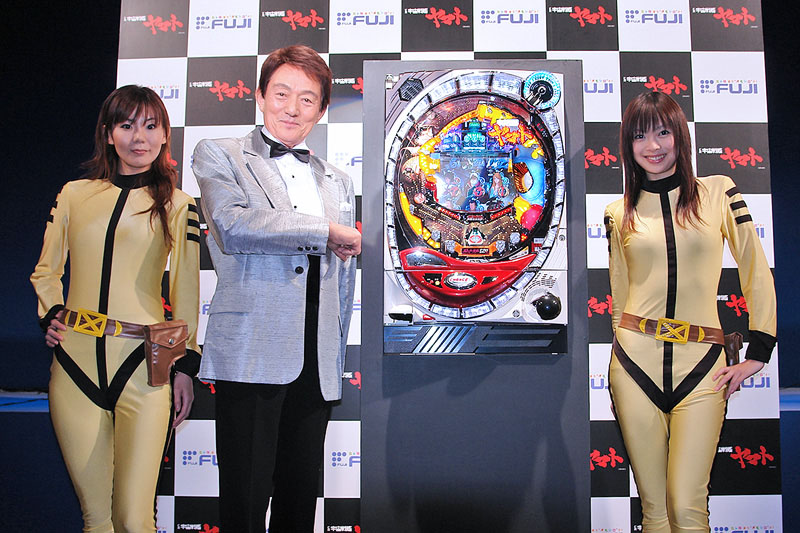 As usual with a Yamato marketing blitz, the product itself is only part of the story. This became evident with Fujishoji’s multi-media rollout party for the game, held on November 10, 2007 with singer Isao Sasaki accompanied by an army of Yukis to kick off everyone’s first chance to play the game. (And this wasn’t even the first event of its kind; an almost-identical rollout happened in 2001 to promote the typing games from Sourcenext.)

See a photojournal of the Pachinko rollout party here

Attendees of the rollout party (and other promotional events) walked away with a handful of goodies, starting with the extensive press kit shown above left. It included an enormous presentation book (approximately 10″ x 15″) and a collection of leaflets. It all came in a surprisingly deluxe plastic slipcase (above right) with a push-button panel that activated a sound chip with the full Wave-Motion Gun countdown dialogue. Naturally, the gun itself lit up at zero.

See the full presentation book and other elements of the press kit here. 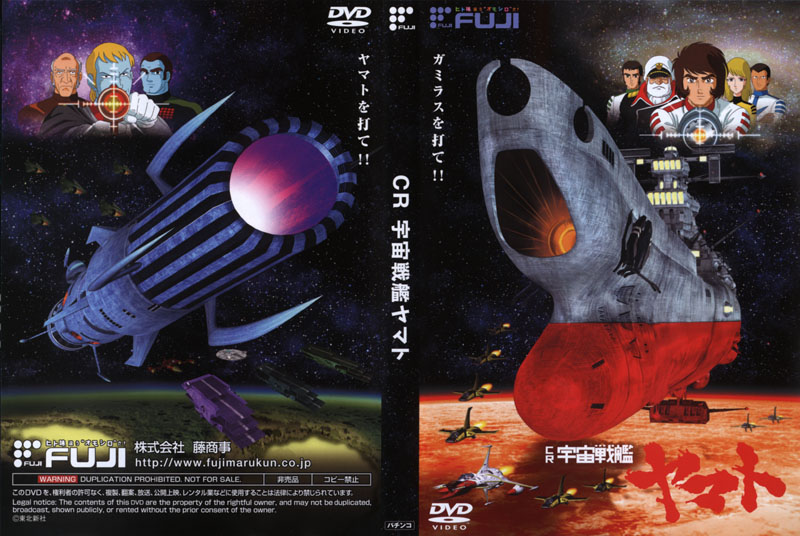 An all-region DVD was also included in the kit containing 9 minutes of promo videos that covered the gameplay and all the various gimmicks. According to the promo footage, winning the entire game activated a bonus game based on Final Yamato. 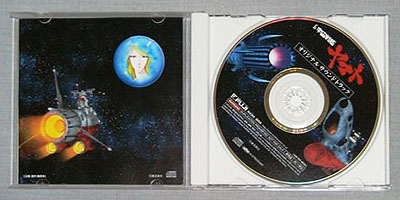 The involvement of Isao Sasaki meant there had to be a musical connection, and this CD made it official; he re-sang the opening and closing themes for the game, both of which appeared on the disc along with an electronic version of the “Infinity of Space” theme.

Two more exclusive trinkets that could be had at the rollout party were an entry badge and a deck of picture playing cards, both shown below. 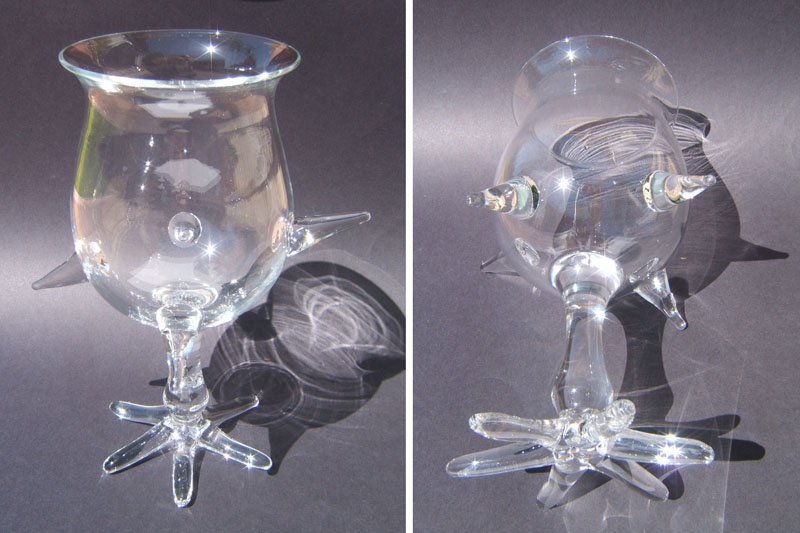 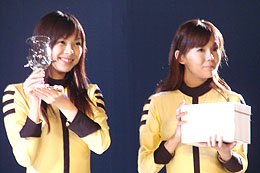 Something else that made Fuji’s rollout party one-of-a-kind were the making of specific Dessler-themed artifacts such as a full-scale throne and an authentic hand-blown glass goblet. Only two of these goblets were made, both of which were raffled off by the Yukis. The goblet shown here later found its way into the worthy hands of superfan Carol Hutchings. 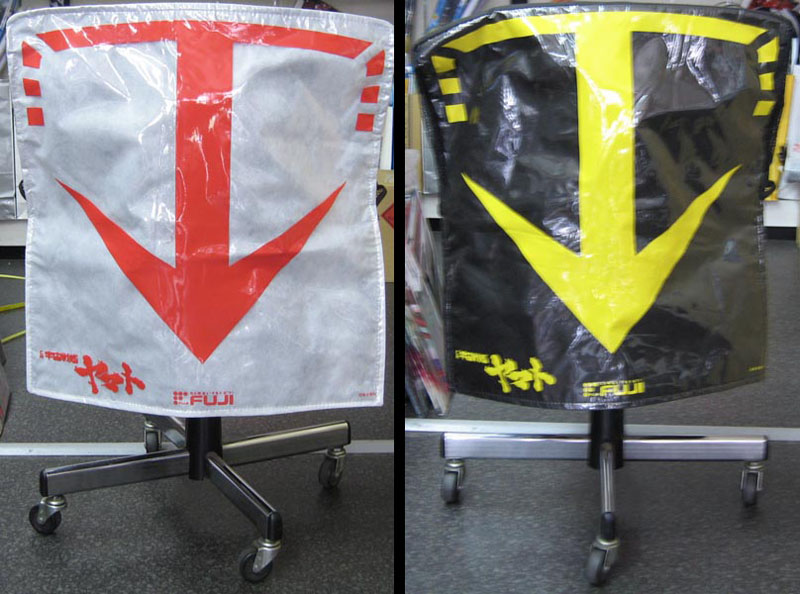 Of course, there were plenty of game consoles to be played at the rollout party, and even the seats in front of them had a Yamato theme; Fuji made these reversible seat covers which were offered to pachinko parlors along with plenty of other eye-grabbing perks.

Someone could work up a sweat with the long hours of gameplay, so circular cardboard hand-fans were in order. And since Japan is still a smoker’s paradise, some Yamato cigarette lighters were a given.

Available in five different designs, they also had light-up LEDs to help you find your way home at night.

More CR Yamato products made by Fuji and distributed to pachinko parlors: Two-sided posters in both vertical and horizontal formats… 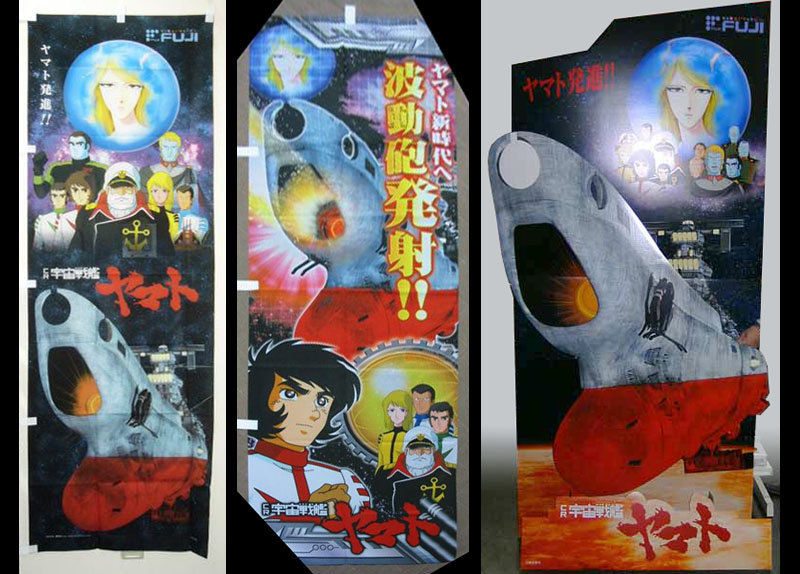 …a suction-cup Analyzer pennant saying “Yamato Launch” and a cardboard pop display that fit into a slot atop the machine. 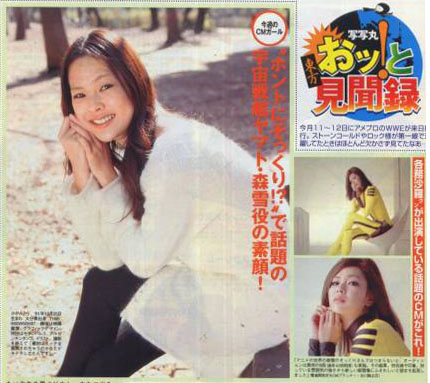 Media attention was also widespread; pachinko hobby magazines offered playing tips on CR Yamato, along with other games that were out at the time. (And if you think those magazine covers are noisy, you haven’t spent much time in a pachinko parlor!)

Numerous eye-catching TV commercials were also made, some of which featured a gorgeous model dressed in another Yuki uniform. See some of the commercials here:

After all this, there was no doubt that Space Battleship Yamato was in full-fledged comeback mode. And yet, Fujishoji even found a way to top it a little over one year later.

See more of this game: