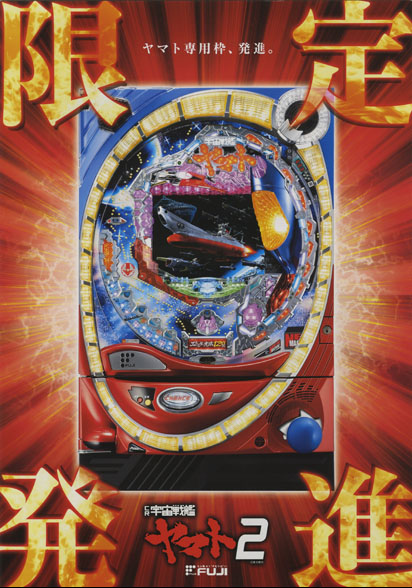 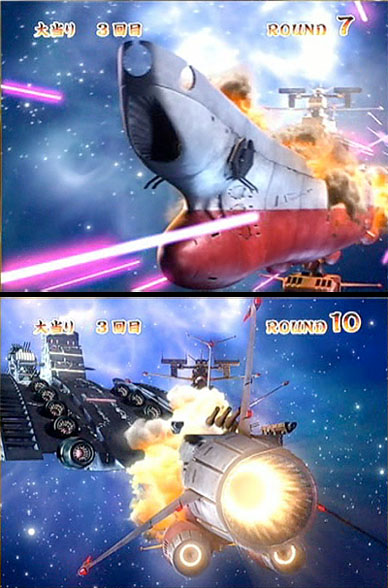 In February 2009, 14 months after the smash debut of CR [Card Reader] Yamato in Japan’s thriving pachinko parlors, the sequel game exploded on the scene with numerous upgrades and some absolutely mind-boggling new animation. Fujishoji’s “Oval One” console design got a facelift for the new game, tricked out with more mechanical gimmicks and the game itself took the next logical step into Yamato 2 territory. As was now customary with such games, certain twists and turns could take you into the Farewell to Yamato continuity, but the basic interactivity worked the same way, especially in flashback scenes to CR Yamato.

Every facet of the game is based on the spinning numbers of a video slot machine, each number linked to a character with events resulting from certain combinations. Kodai’s triple 7 is the natural jackpot, but every combination has a payoff of some kind. Though the premise is identical to the previous game, the individual character animation is new.

It’s no longer enough for the action to be limited to the screen; CR Yamato 2 makes the console itself into a moving, interactive object starting with a Cosmo Zero in the upper left corner that lights up, swivels, and fires across the screen at key moments. Below that is a column of mini-pulse laser turrets that slide out and do their own damage.

Twin shock cannons are mounted below the video screen that swing up and fire. Depending on the timing, the beams bounce across the screen and reveal new numbers for the game. And finally, the bow of the ship sits ever at your right, ready to slide forward and blow everything to smithereens. With all this firepower at your disposal, you might think yourself unstoppable…but remember, this is the Comet Empire you’re up against.

See some of the mechanical features in action here (1:09)

Above and beyond these new mechanical features, the most impressive feature of the game is undoubtedly its suite of high-end CG animation that stands head and shoulders above all previous efforts.

Most of the game, in fact, is filled with animation both old and new; TV footage combined with lively CG animation that carries a player through the story. But the climactic footage is something special—a recreation of the final showdown against the Comet Empire with more power, majesty, and scale than has ever been seen in a Yamato production. And for an added bonus, it can be viewed in 3D on the game screen. 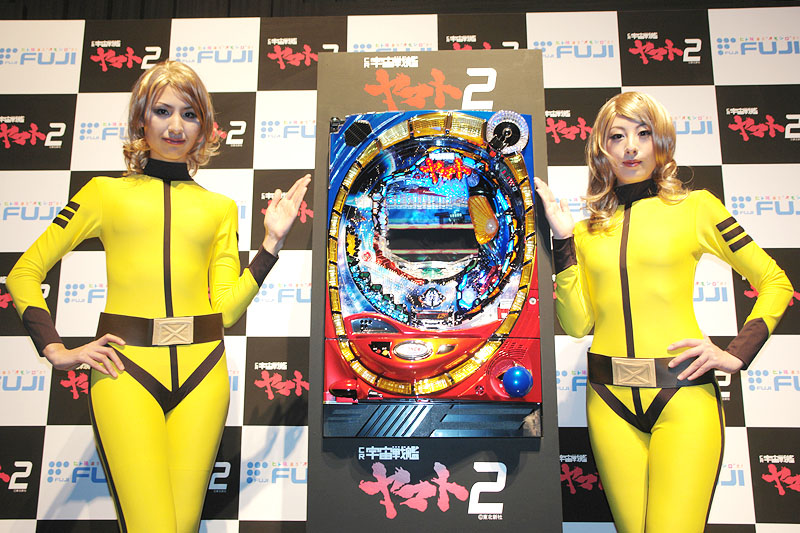 Fujishoji held its grand rollout party for the new game on February 5, 2009. The Yuki army from the previous party was back in force, this time in both the crew and nurse uniforms. A promotional film was shown, the game could be played, and a mountain of new merchandise was introduced to the hungry public.

See a photojournal of the rollout party here

Promotional film screening at the party

Playing the game at the party

As before, a generous bag of giveaways went to everyone (shown above left) including a game guide, a DVD, a bottle of shochu, and a press kit in the same oversize format as the previous one. The slipcase was a handsome metallic red to match Yamato‘s lower hull, and was packed full with another gorgeous presentation book and all manner of flyers.

See the entire presentation book and other elements here.

The DVD contained 17 minutes of promo videos and TV commercials which were screened at the rollout party. (See links at the end of this page.) 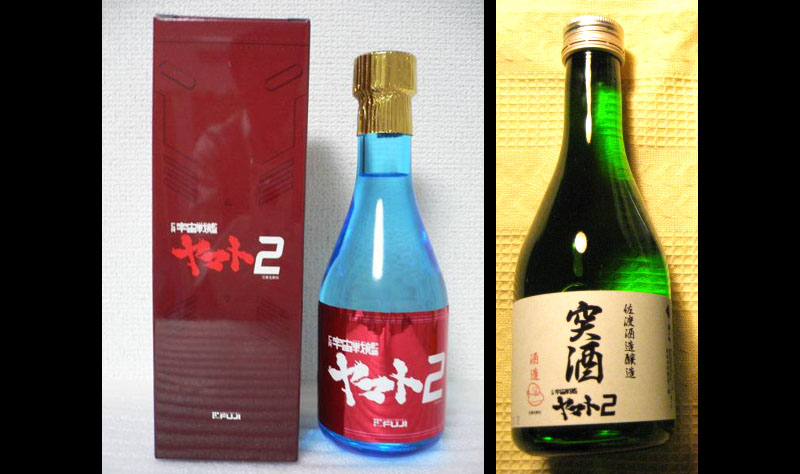 Shochu is a grain alchohol made from wheat or barley, and two forms of it could be had at the party.
The bottle at right came with the Dr. Sado stamp of approval. 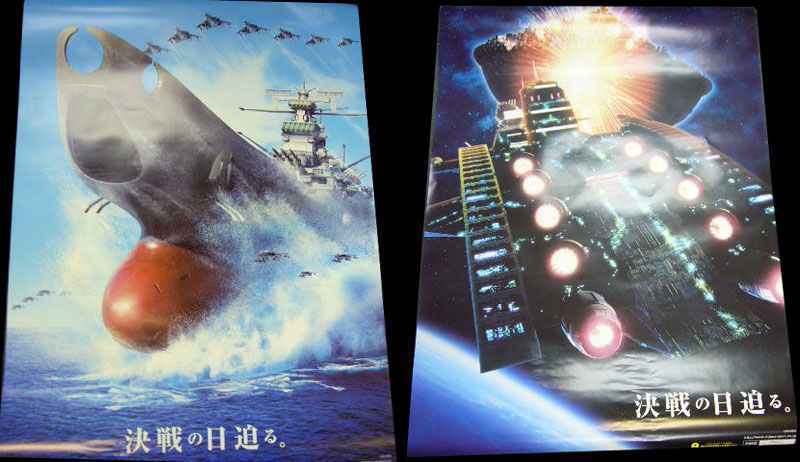 Other merchandising flowed like water, starting with two CG posters (above) that were printed with half of a giant image on the back. Both poster backs are shown combined below.

Cigarette lighters have become a staple in many prominent merchandising campaigns. They generally fall into one of two varieties, the slim style with a built-in LED light (above left), and the standard Zippo (above right). And wherever cigarettes go, coffee usually follows. So of course there’s a CR Yamato 2 mug (below left) to keep your Space Java piping hot. The yen needed to buy these could be easily carried around in your CR Yamato 2 wallet (below right).

Fuji also released this second set of LED lighters in the same shell but with slightly flashier artwork.

If you had to put a time limit on your gameplay, Fuji provided a set of Yamato 2 mini-clocks to keep track of it.
There was also a clock for the previous pachinko game, seen above right. 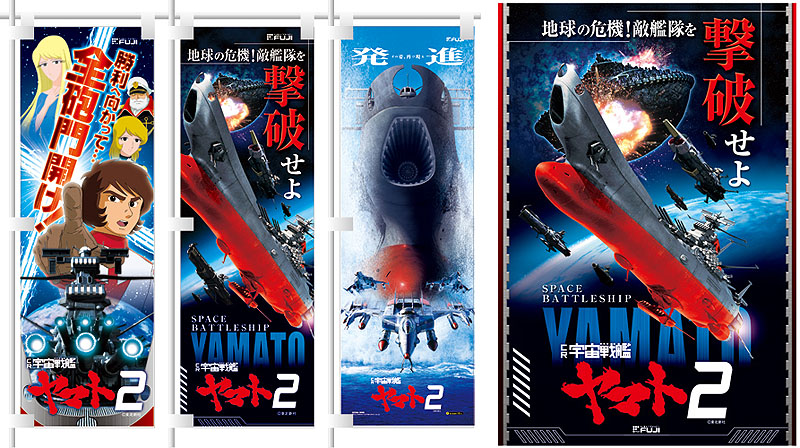 With every new high-profile pachinko game comes a colorful line of promotional displays for the casinos, and none were more high-profile than CR Yamato 2. The displays included three sidewalk banners, a wraparound image…

…shown here on an inflatable display, a horizontal sign with chaser lights, a new seat cover…

…a rotating light-up column with four different side panels… 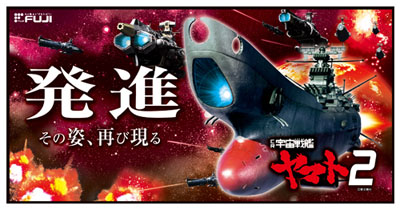 …and will undoubtedly fuel a collectibles market for years to come.

See all of the display products here 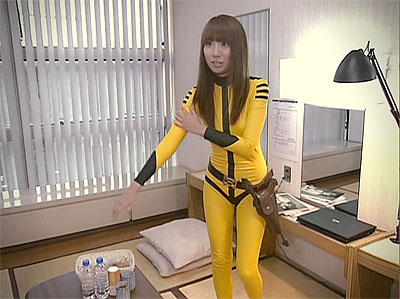 There’s even a CR Yamato 2 doormat reading “LAUNCH” (at right) to catch the eyes of those who somehow manage to miss everything else. And yes, there’s another live-action Yuki, too! Plenty of new TV commercials were produced for the game, including a few starring J-idol Azusa Yamamoto, who is shown here ready to fly out the door the instant she hears about the game. 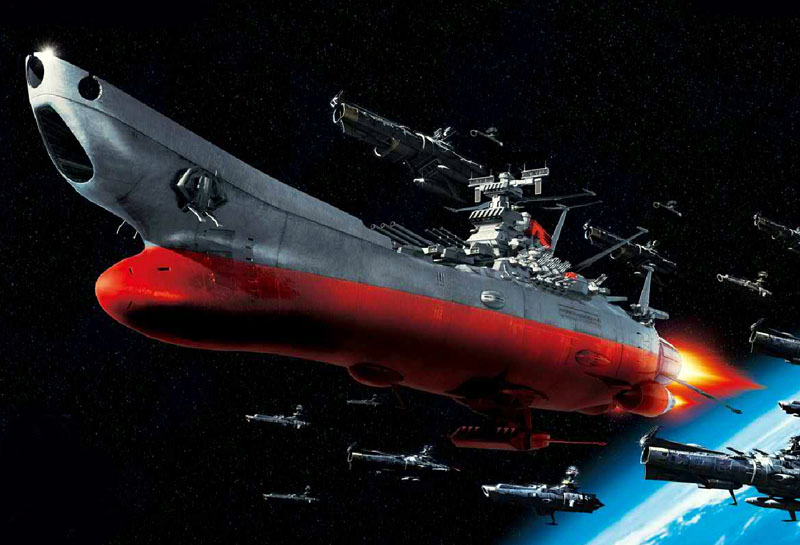