Take yourself back to 1977. Movies arrive at theatres and are cycled out seemingly for good. TV episodes are on for half an hour at a time, then vanish. There is no affordable way yet to intercept and record anime for on-demand viewing. If you’re a fan, you want some way to keep it alive when you’re not watching it. If you’re an anime producer, you want some way of keeping your work visible 24/7. The solution is the same on both sides: merchandising!

The Space Battleship Yamato movie wasn’t the first anime to get heavy exposure through mass merchandising, but it was certainly the first one to expand the viewing audience beyond the elementary school set. It took a while for licensors to figure this out; nearly all the merchandising for the original TV series (shown here) was aimed squarely at the pre-existing kid’s demographic. Products generated for the 1977 movie didn’t leave them out, but were designed with the knowledge that teens and young adults were also paying attention–and they had a lot more money to spend.

The merchandising campaign for the movie was absolutely enormous and pasted Yamato onto everyday objects that had likely never before been linked to anime. We’ve already covered the movie products that were offered through the official fan club, but that just scratches the surface. Shown here are many, many more. Though this is not a complete collection by any means, it should leave no doubt that a vast new territory was being opened up.

The earliest collectible for the Yamato movie anyone could get was also the most prized of them all; the grass-roots marketing kit sent to volunteer fans from Yoshinobu Nishizaki’s Office Academy. Looking for any way possible to make the movie more visible, he turned fledgling fan clubs into promotional guerillas, arming them with a poster to hang in public spaces, instructions on how to contact newspapers and broadcasters, and an advance ticket for the movie itself. The irony of such a collectible was that putting it to use meant giving it up, which means intact copies like this one must now be extremely rare. Read more about this once-only promo campaign here.

Big movies demanded big promotion, and this giant-size foldout “press flyer” was about as big as you could get in terms of free handouts at movie theatres. This one measured about 14″ x 30″ when fully opened, and had plenty of text on the opposite side (below) to read while waiting for your movie to start. Jumbo flyers like these have persisted throughout the years; there was one of identical size for Final Yamato in 1983 and the live-action Yamato movie in 2010 (with an extra foldout panel). 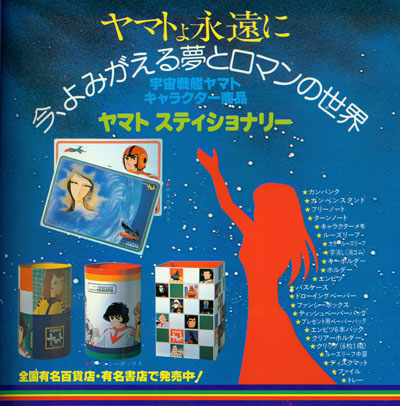 Based on the content of this ad from the Tokyu Recreation Co. Ltd., they appear to have been out in front of the first wave of merchandising, described as “Yamato Stationery.” Interestingly, the topmost headline in the ad reads “Yamato Be Forever,” which is probably the first example of it ever appearing in print (in this case, November 1978). It was next to appear as the title of Yamato 2‘s final episode in April ’79.

Tokyu’s can bank was a simple metal tin with a coin slot; ideal for saving up all the yen you’d need to buy everything else they made.

Their deskmats came in two varieties, presumably one for boys and one for girls.

Their metal trays followed a similar design, but with a unisex Yamato image for crossover. 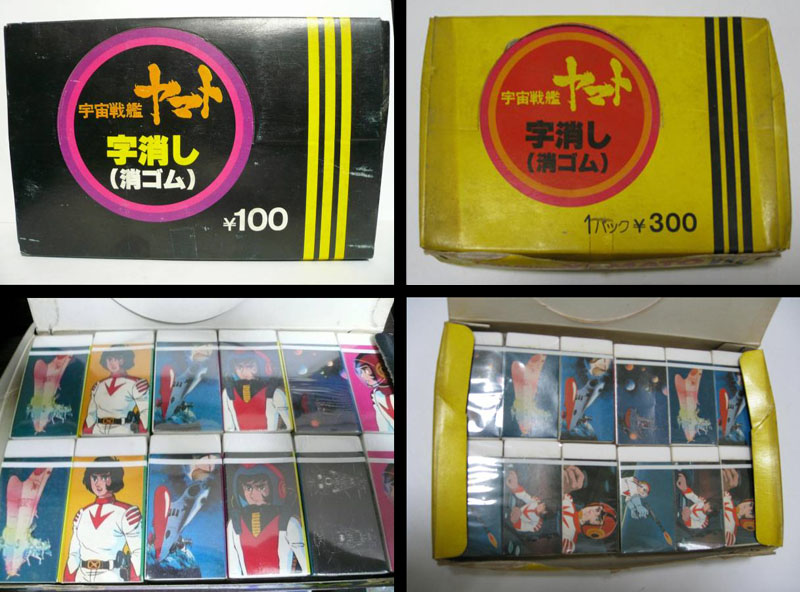 Their gum erasers came in small and large batches; about a dollar for the first and three dollars for the second.
Odds are, either package would easily cover you for an entire school year.

Both styles of loose leaf paper could have come from Tokyu; the triple crew stripe was a familiar design element on their packaging shown above left, but they were also given to the simplified look shown above right. Odds are, fans didn’t have much of a preference.

Naturally, fans weren’t left to scramble around for a custom binder to hold that paper; Tokyu had that covered, too.

Tokyu’s keyholders all featured a single image set into a small plastic case, sold from the rack shown below left. The producer of those shown below right is questionable, if for no other reason than they don’t match the style of other vintage keyholders.

Tokyu’s familiar triple crew stripe made another appearance on the packaging for the Character Pencil set (also shown in color below left) and the box for the “Can Pen Stand” above center. And what good are pencils without drawing paper? Tokyu saw to that as well, as seen above right.

Here’s another look at that last item.
It probably contained simply blank sheets of paper, but the packaging made it 100% more awesome. 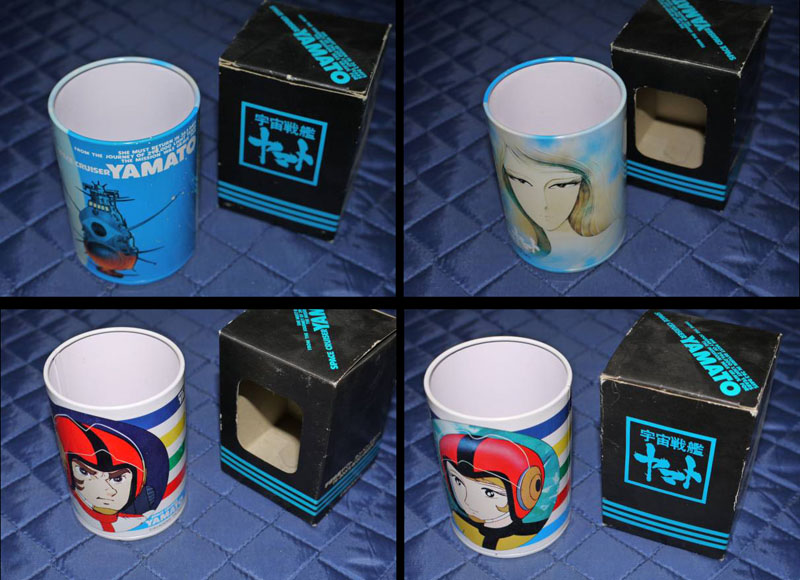 Here’s a color photo of the “Can Pen Stand,” which (naturally) came in two varieties.

Tokyu also provided three ways to dispose of the unwanted boxes and wrappers; two metal trashcans shown above right and below…

…and this larger box-shaped version. As we know now, no self-respecting fan would toss anything into these that said ‘Yamato’ on it, but those who did only made the surviving merchandise more valuable to collectors.

Moving on from the Tokyu collection, we have the Kodomo Bento [Child Lunch] Set, an extensive lineup of dishes and tableware for the youngsters who wanted a little more Yamato in their diet. The manufacturer, Marumiya, apparently had an all-inclusive policy for these, as seen below.

The starter set shown above is in traditional white, but it wasn’t all they had to offer.

The same artwork was also applied to blue plastic, obviously meant for the boys in the audience…

…including a bowl and a mug with some variation in the character selection. The art in general was a hybrid of the first and second Yamato stories, which would place this set in the latter half of 1978.

There was also a handy case (in different sizes) for fork, spoon, and chopsticks…and here we see the first sign of pink.

Yes, girls were also invited to the lunch party with a set of their own that more
prominently featured Yamato‘s resident caregivers, Yuki and Dr. Sado.

Not even the chopsticks were left out of the push to turn all everyday objects into Yamato objects.

Finally, there was a set of more upscale plates (on actual porcelain) for the older crowd, manufactured by the Doi Company 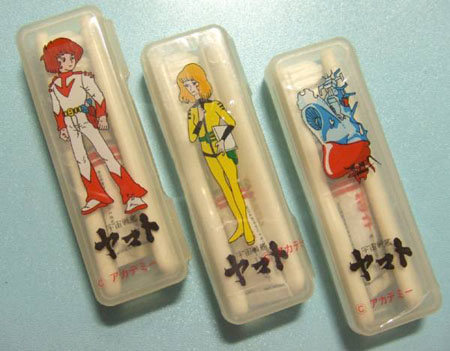 And when the meal was over, there was even a set of three travel-toothbrushes to get your teeth wave-motion white.

Bandai, maker of the revolutionary Yamato model kits, found a new way to promote them with this 3D lenticular pinup featuring their forced-perspective “image model” about ready to float off the card.

Here’s something only a truly hardcore collector would hold onto: bottle wrappers. These originally came with bottles of Mirinda orange soda as part of a “Mini Yamato” prize lottery campaign. You would peel back the label to find out your lot in life; lucky winner or hopeless loser. Then you’d either celebrate or console yourself with a delicious orange soda.