As huge and successful as the Yamato movie’s merchandising became, it was still somewhat of an experiment. It was known that teens and young adults were paying attention, but would they actually go for the stuff that was filling up store shelves? Licensors for Farewell to Yamato products didn’t have to ask that question; they had seen the feeding frenzy and knew what to plan for in the next round.

That made Farewell‘s merchandising campaign the first of its kind; just as the movie improved upon its predecessor, the products also went to the next level–except in cases where it wasn’t necessary. Many of these, in fact, were do-overs from the first wave with a different image attached and multiplied for greater variety.

Of the many, many licensors who rode the Farewell tidal wave, the Amada Printing Co. was probably the most visible. One of their cheapest and most plentiful offerings was an extensive line up of gum-rubber toys co-produced with the Nomura Toy Company, available boxed and bagged.

Covering characters and ships alike, the toys themselves were probably made by Nomura (the master toy licensor for Yamato 2) with Amada generating the packaging. For each company, this merely scratched the surface. See the entire Nomura line here and read on to see what Amada did on their own.

First up, released in August ’78, was a much bigger outpouring of their popular Mini Cards, this time issued in vast numbers in six different box styles (four for Farewell, two for Yamato 2) and 18 pocket books. See most of them here.

There were a total of 240 cards with a color image on one side and text on the other. A select few were overprinted with additional text proclaiming them a “Lucky Card” that could probably be exchanged for some sort of bonus product. There were another 120 cards issued for Yamato 2 in 1979.

These bootlegged, pseudo-Yamato mini-cards were someone’s attempt to cash in on the Amada concept, a mash-up of images from the first two movies and, of all things, the Red Hawk Yamato model kit. See more photos of this set and an entire rogue’s gallery of bootleg products here.

Amada didn’t stop with the mini-cards; this time they stepped things up and created “Collection Cards.” These could be purchased in a box or as individual packs and were meant to be displayed in 7″ x 10″ booklets. This meant they were stickers rather than cards, but fans didn’t sweat the nomenclature.

Shown here is the booklet for the first set, which numbered from 1 to 120 and first appeared in September, 1978.

This was the box and booklet for the second set, which climbed to 240. Set three (not shown) topped out at 360. 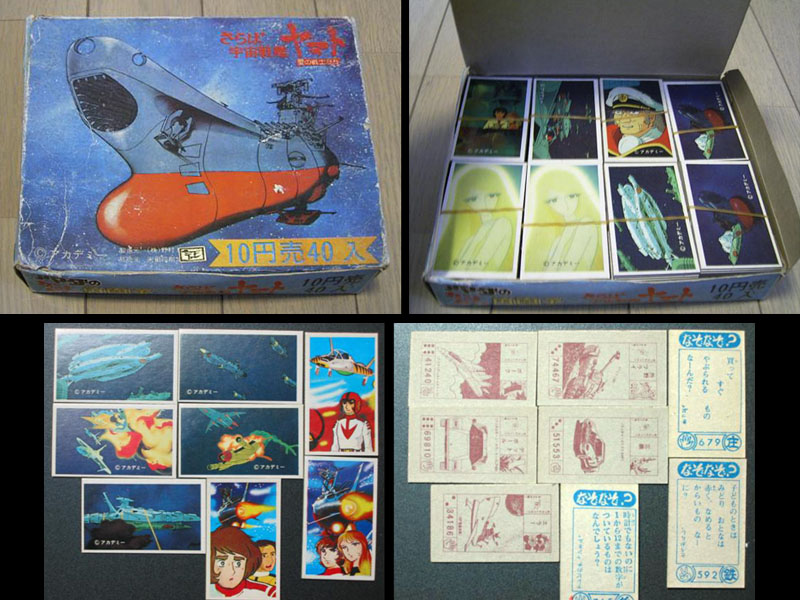 And then there was Amada’s new Menko set, ready to go head-to-head against any other cut-rate non-Yamato Menko card out there. There are actually two types of Farewell to Yamato Menko cards shown here; the Amada brand featured animation stills. The painted images with the blue backs came from someone else entirely…

…as did these unusually-shaped Menko cards from yet a third party. Die-cut cards were rarer, since they were more expensive to make. See more examples of Yamato menko cards here. 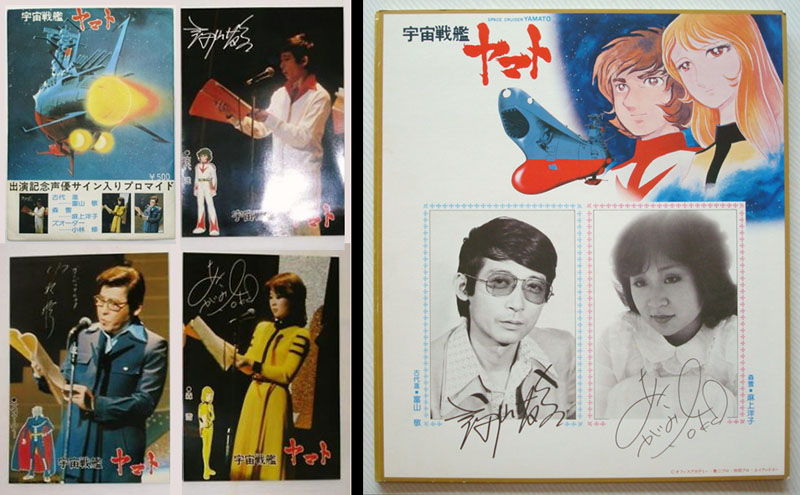 Elsewhere in the card world could be found these signed “Voice Actor Bromides” that probably emerged from the 1978 Symphonic Concert series and featured the actors for Zordar, Kodai, and Yuki. 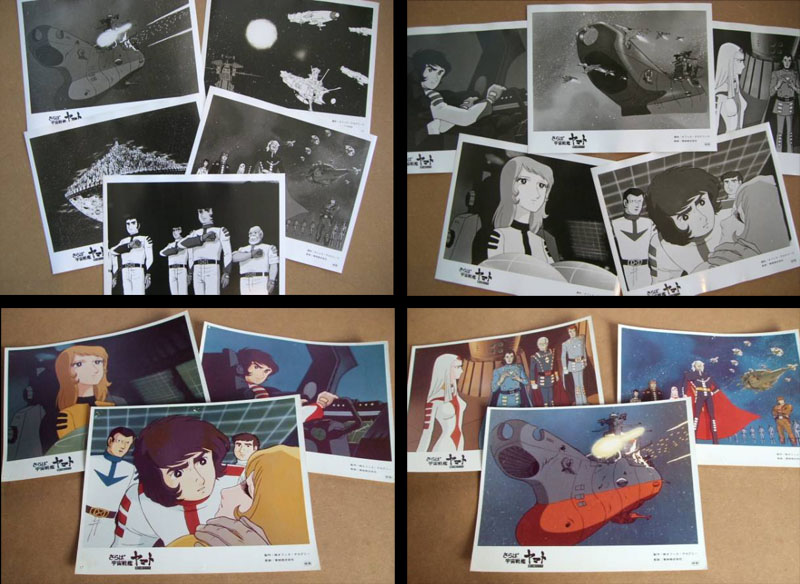 The Toei Movie Company, animator and distributor of Farewell to Yamato, released a set of stills in both color and black & white. In short order, they started showing up in newspapers and magazines everywhere. (Seriously, these images were used by just about everyone.)

Aspiring animators had another opportunity to practice their craft with this Farewell to Yamato cel painting kit from the Epoch company (specifically their ‘Young Epoch’ imprint). Kits like this one may have helped build a talent pool for the 1980s TV anime boom and set up an entire generation for obsolescence when computer coloring took over in the 90s. 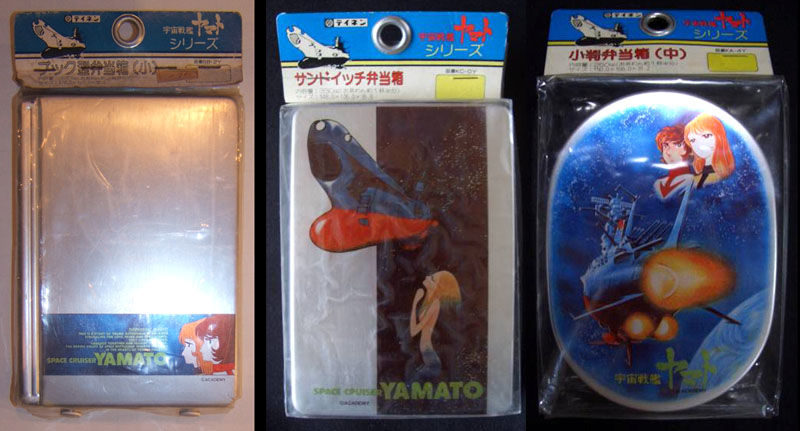 Teinen Industrial Co. had made products for the Yamato movie and carried on to make the most durable Farewell products ever, a trio of aluminum Bento [lunch] boxes designed to carry food.

The box shown at left was the most elaborate, equipped with chopsticks and a secondary compartment. The other two were sized for sandwiches and whatever else constituted a lunch worthy of Yamato packaging.

Teinen also made another version of the ‘Handy Mate’ thermos that accompanied their products for the first movie. The drinks container shown at right came from someone else, probably Marumiya, maker of the Yamato ‘Child Lunch Set’ made for the first movie. 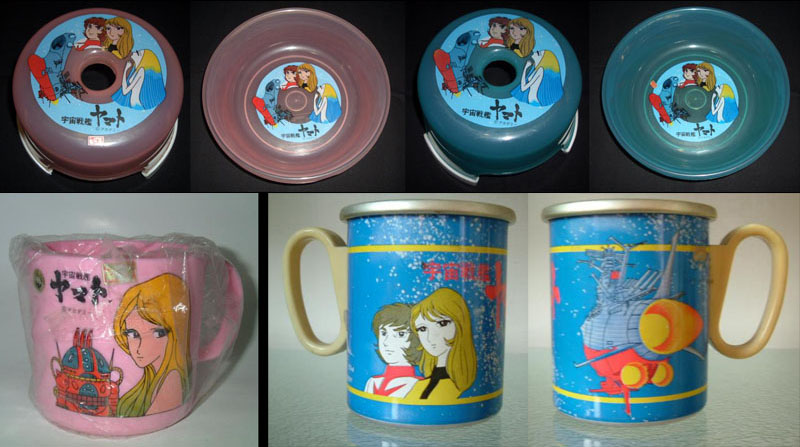 Based on the style of artwork, the rice steamer bowls shown on the top row above almost certainly came from Marumiya, along with the pink mug. One last entry from Teinen was the metal mug shown above right, which reuses the artwork from their ‘Handy Mate.’

Surprise! Not every licensor associated with Farewell to Yamato had a Japanese name! The actual Pepsi Corporation took its first (and perhaps only) foray into anime licensing with a modest product line that started with these three “free note” books of blank paper (each shown front and back)…

…some keychains and a book cover… 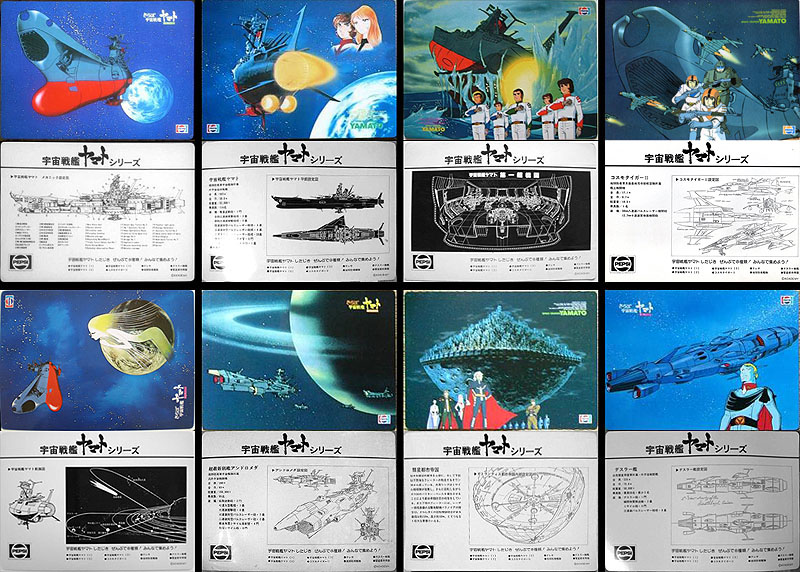 …and this series of eight Shitajiki [pencil boards] meant to slide into a note pad that lacked its own backing board. Little more is known about the Pepsi element of the campaign, but it must have met with some success since they returned two years later for Be Forever.

Shown here are three very rare Pepsi promotional posters showing their entire Yamato product lineup: note books & keychain cards, the book cover, and pencil boards. Based on these, it appears that the bottlecaps carried a cash value and could be redeemed for the products.

More pencil boards were available through the official Yamato fan club, but the one shown above left was yet another holdout from somewhere else. And since the existence of a pencil board is predicated on having some pencils around, yet another licensor stepped in to provide some.

Something else new to the collecting world was this set of posters. Some reused the art from theatrical one-sheets, others put it through variations as seen above. See the actual one-sheets in our Farewell to Yamato gallery. 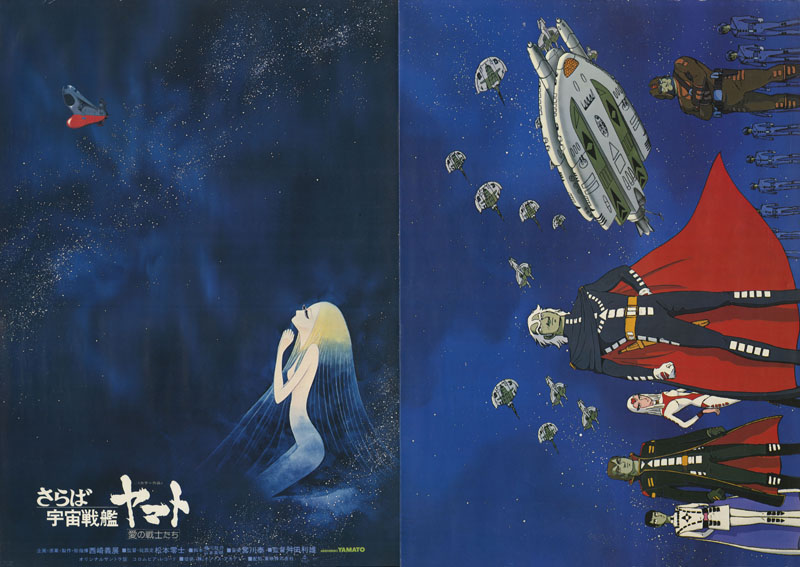 Flyers that promoted the movie were collectible as well, and this one was a giant with twin color posters on one side… 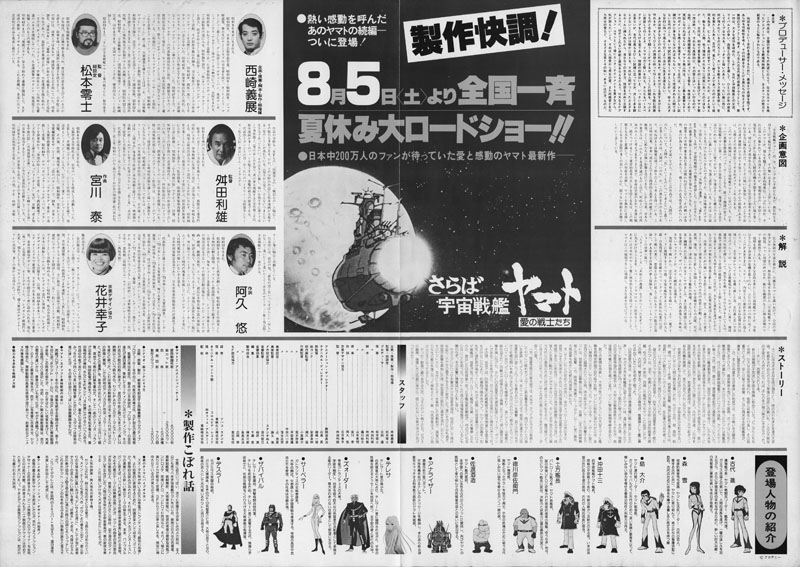 …and loads of data about the making of the film on the other. 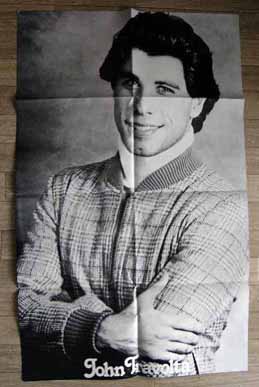 The seldom-seen horizontal one-sheet shown above left became a collector’s item once it entered the after-market along with others of its kind. And just to remind us exactly how long ago Farewell to Yamato was fresh and new, there is the poster shown above right, most likely a bonus item in a general interest movie magazine when we see who was featured on the flipside. This was just one more indicator that Yamato had gone about as mainstream as possible in 1978.

All of the above represents only part of the vast Farewell picture. There’s plenty more to come.