The Nerima ward is a bit north and west of the Tokyo metropolis, and it’s the heart of the Japanese animation industry. Countless studios large and small are tucked away in its various corners, the biggest of which is the only one that openly advertises itself to arriving trains at Oizumi Gakuen Station. 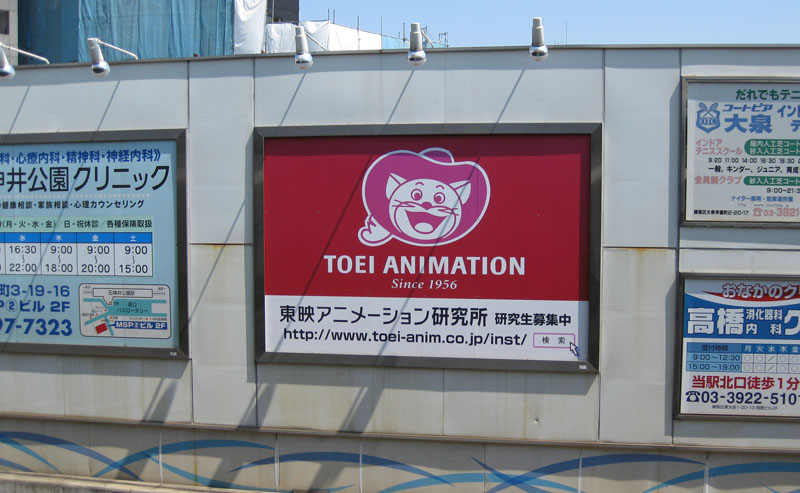 Founded in 1956, Toei Studio was the birthplace of the world’s first full-color anime feature films before it also became a powerhouse of TV production in both anime and live action. Some of anime’s most talented artists and directors cut their teeth on Toei projects before starting up shops of their own. One reason we’re making the pilgrimage to this mecca is because three of the Space Battleship Yamato movies were made here. Also, it’s the only animation studio in Tokyo actually open to the general public.

Anime makes itself known as soon as you step off the tracks and into the station. Leiji Matsumoto is probably the most famous local resident, and the entire neighborhood is seemingly happy to promote this fact.

The Galaxy Express 999‘s conductor salutes all passersby, but he’s utterly unhelpful when it comes to giving directions. A plaque on the wall behind him is personally autographed by Leiji Matsumoto and reads, “This place, Nerima/Oizumi, is the birthplace of Japanese Animation. Toei Animation was founded here in 1958, makers of the first full-color feature-length anime movie, The White Snake. In cooperation with local resident Leiji Matsumoto, this symbol was created for the birthplace of Japanese animation that now covers the world. The conductor of 999 has been appointed the honorary stationmaster here at Oizumi Gakuen Station, March 16, 2008.”

The theme continues outside with a huge Galaxy Express mural at the bus stop that sports another Matsumoto autograph dated March 8, 2009.

The streets themselves continue the celebration on dozens of lightposts encircled by the Galaxy Express.

A closer look at them shows terrific craftsmanship, but even if you could nab one, there’s no way to sneak off with it. The engine alone is a good 18″ long.

The place is full of distractions to keep animators from their appointed rounds, including the inescapable pachinko parlors. These are absolutely everywhere in Tokyo, so we didn’t pay it much heed until we passed a sign showing new machines that had just arrived the day before.

The Space Battleship Yamato pachinko game dates back to late 2007 (get a closer look at it here), so neither of us expected to see one still in action, but Gaia seems to believe second-string games are just as much fun as new ones. There’s me on the right pretending I know how to play one of these things.

Of course, there was plenty more pachinko to see (the new Yamato 2 game was almost everywhere) but we had other things to do first. Our 15-minute walk to Toei took us past another Matsumoto reference that may or may not have been intentional…

…but a couple of minutes later we were face to face with the real deal. Upon arrival, visitors receive a special “Toei passport” badge (which unfortunately you are unable to keep) that allows you entry into the public areas of the main building. These are fairly limited and modest. The first taste of this is in a hallway of framed images from company productions, each labeled in Japanese and English. Most are fading from prolonged proximity to the lights. Not exactly a museum-quality mounting.

The gallery is the largest public room, a collection of various artifacts and 3D props from over the years. With few exceptions, the bulk of the displays are simply ink on paper. The most impressive piece is the year-by-year listing of every Toei production, which provides a God’s-eye view of Toei’s expansion over several decades. Elsewhere in the room are display cases with maquettes from the studio’s earliest features.

Click here for a photo gallery of the gallery.

A slender adjacent hallway leads to three more small rooms, the first of which is filled with the animation camera equipment of yesteryear, the heavy solid-state machinery of the pre-digital age. This is where the rubber would really hit the road, since it was one of the last phases of production–run by those who had to make up for everyone else’s lateness.

Here we see the same studio in 1978 during the production of Farewell to Yamato, when such equipment was state of the art and had to endure round-the-clock use. (Be Forever and Final Yamato were also animated here.) These days, the closest you get to this process is in a model of two Toei worker bees demonstrating how it was done back when a mouse was just something you chased out of the room at 3am. In this diorama, the cameramen just happen to be shooting an episode of Dr. Slump.

The next stop is a gallery of another kind, a guest room in which you can sign a visitor’s log and examine drawings by the studio’s artists. They are almost all caricatures of filmmakers or manga creators whose work graced these halls at some point…

…or political cartoons that are obviously right up to the minute.

Finally, there’s a showroom devoted to merchandising with a link to Toei productions. It’s a tiny percentage at best; a complete display dating all the way back to 1956 would easily fill the Smithsonian. That being said, it’s still something of a letdown. Like all the other exhibits here, it lacks documentation and isn’t as comprehensive as one might hope. In general, it doesn’t seem to be anyone’s job to maintain and update these exhibits. The time and budget to lavish a full-blown museum treatment upon them seems not to be on the priority list.

It’s entirely forgiveable for a working studio to devote its energies into producing what it’s known for rather than paying tribute to itself, but speaking as a longtime fan, it’s hard to stand in the middle of such a historic place and not daydream about giant underground vaults filled with treasure, tailor-made to soak up the awe and respect they so richly deserve.

That’s not a movie billboard, it’s for a game. And they’re not lining up at a box office, they’re ready to play.

Why is pachinko so popular? In Japan you may as well ask, why do we breathe? If you add up every major American sport, you might match the insatiable devotion to this game. It began as a simple “gotta catch ’em all” apparatus with cascading metal balls on a vertical pegboard. The white noise was probably therapeutic, like a rainstick. But that was then.

Now pachinko games are an unholy mashup of pinball, anime, and video games with chaser lights and high-end sound systems. Five minutes inside a typical pachinko parlor is like standing in front of a jet engine or the front row of a Who concert. It’s so loud, you literally cannot hear the machine you are playing. But nobody seems to mind.

The machine itself is basically just an electric box that dispenses the metal balls. The variety comes from whatever faceplate is currently attached to it. This is what makes each game unique, even if the rules and mechanics are essentially the same. With anime as a bottomless well to draw upon, there will never be a shortage of new themes.

The Space Battleship Yamato 2 game rolled out just two months before our trip (as reported here), so it wasn’t at all difficult to find. The parlors pull you in with banners for the new hot game, and the bigger locations will map it out for you. One such map is shown above right with the Yamato 2 aisles called out.

Here’s one of those aisles. Finding it is like taking a walk through anime history, since classics from the golden age sit right next to the newest and coolest. Here’s a tiny sampling of the games currently keeping company with Yamato 2: 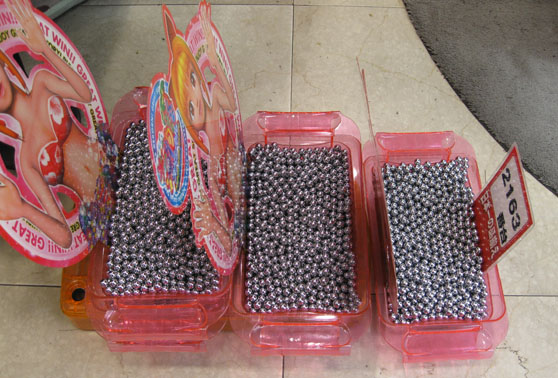 After that, you might be asking what it’s all for. Why do they do it? Simple: the balls.

You walk in and buy a tray full of the little metal balls, load them up, and start winning them back. The more you win (through whatever arcane combination of moves the game requires) the more you reload, and the more trays you fill up. When you’re done you haul your trays over to the cashier to exchange them for cash or prizes. Repeat as desired.

One of the newer innovations is the CR (Card Reader) pachinko game where a credit/debit card takes the cash out of the picture completely. But as long as the games go on, there will always be the little metal balls.