Yamato 2202 Chapter 7 New Star Chapter premiered in Japanese theaters on Friday, March 1, 2019 with all the bluster and fanfare we’ve come to enjoy. It was our last chance to observe such an event for some time to come, so this entire report is devoted to that day. 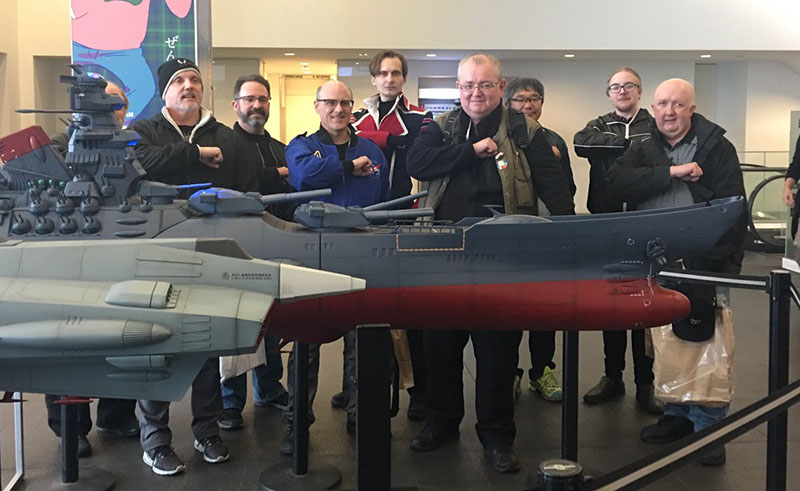 Aliens from outside Japan infiltrated from different worlds, assembling at the Shinjuku Piccadilly theater early in the morning of March 1 to collect their tickets, buy merch, and be among the first to see New Star Chapter. They did not go unnoticed by the locals; this photo was posted on Twitter by Mohsan who exclaimed, “Overseas Star Blazers fans rushed in!”

Read about their exploits in the Yamatour 2019 travelogue here.

Photos posted on Twitter by the 2202 Production Committee and Naochan

Following the Friday evening screening of Chapter 7 at the Shinjuku Piccadilly, Writer Harutoshi Fukui and Director Nobuyoshi Habara were reunited on stage with MC Osamu Kobayashi to discuss the film. Yamatour crew members were there, including Gwyn Campbell, who said on Twitter: “That was a surprising end to the series. Even partially redeemed Chapter 3. It was nothing like what I was expecting. But it worked.” 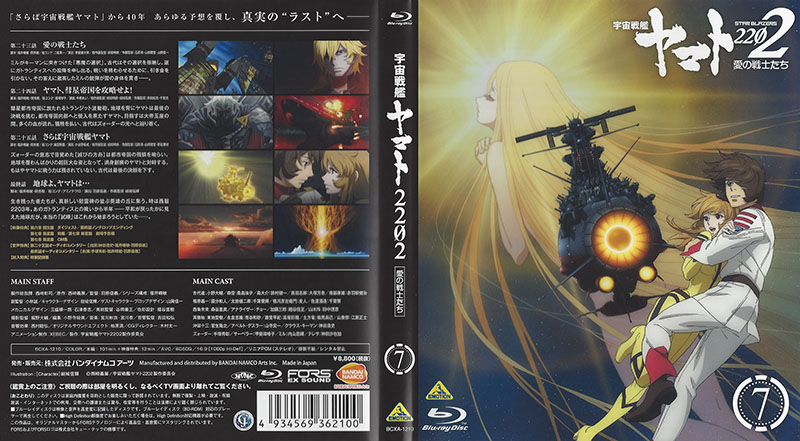 For what may be the last time (until further notice), theaters sold the blu-ray for Chapter 7 on the very day you could see it on the big screen. The bonus booklets (below) contained the storyboard and voice-acting script for the final episode. 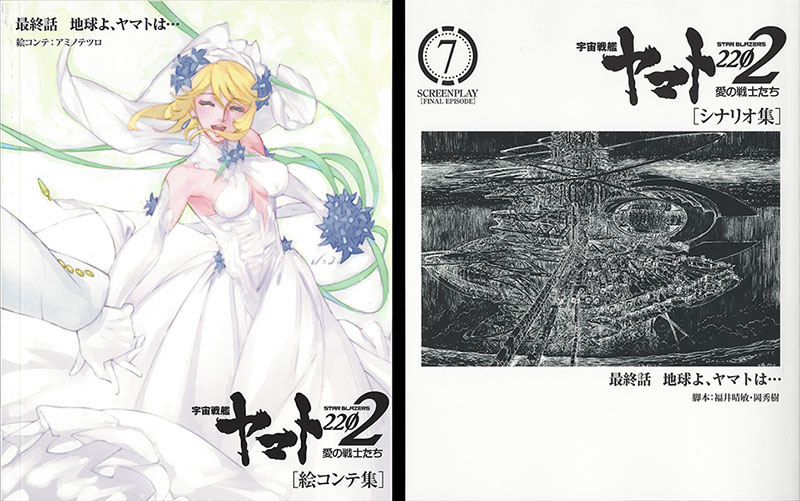 The disc came with its own booklet (see it from cover to cover here) along with trailers, audio commentaries on the last two episodes, and the story digest that preceded the film in theaters.

The last 2202 program book was just as lavish as the first with 44 color pages devoted to story, design, and art. This one wrapped things up with a mission map, a full examination of Gatlantis, an interview with Habara and Fukui, another with Ono and Kamiya, and sendoff messages from cast and crew. The only thing missing was an ad for the next chapter, because, of course…we’re done.

See the book from cover to cover here. 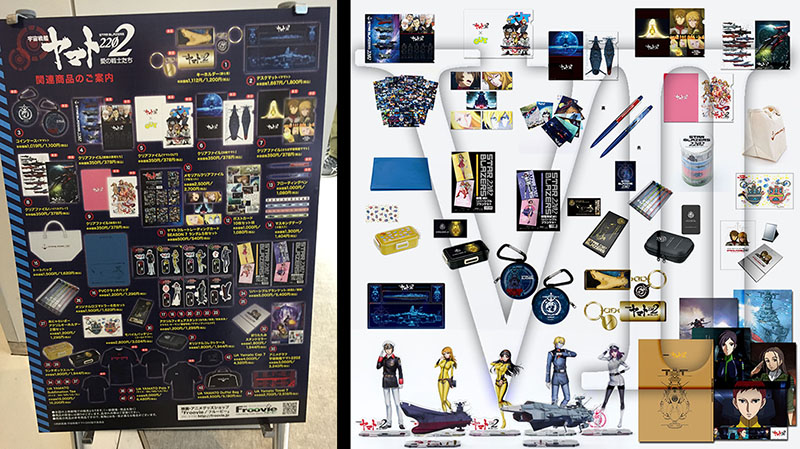 The final round of merchandise sold in theaters hit all the marks and still added some new categories, even this late in the game. See a gallery of the whole set here. 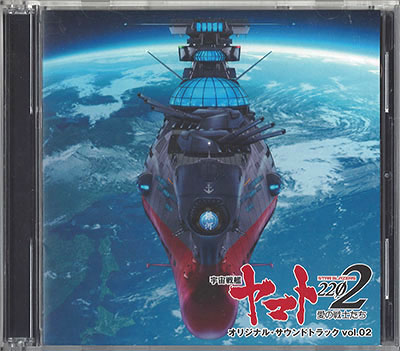 This introduction was included in the disc booklet:

The BGM configuration for Yamato 2202 has the same backbone as that of Ark of the Stars; Earth and Garmillas both fighting Gatlantis. Along with re-recordings from Farewell to Yamato and Yamato 2, it follows the flow of Yamato 2199 with new compositions by Akira Miyagawa.

The body of work for Farewell and Yamato 2 had an enormous number of BGM tracks, close to 250. I read the scripts for 2202 and narrowed it down to 50 pieces that could be recorded within our schedule as floating tracks (and I shed tears over omitting so many others). There are arrangements for new elements in 2202, such as Zordar’s past and love, the Ark of Destruction, the Ginga, battle music for the second half of the story, and a BGM arrangement of Great Harmony (from Ark of the Stars) was added as a new piece. We concluded by re-recording pieces from 2199. This time, arrangements were done freely at Mr. Miyagawa’s discretion, and he also re-recorded Overture and Birth from the 1977 Yamato Symphonic Suite. 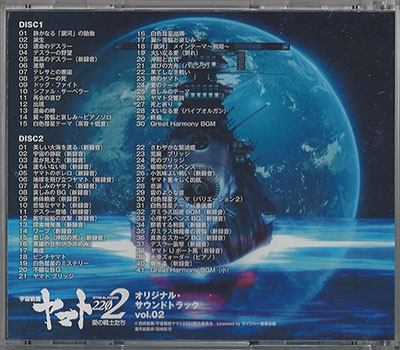 Three orchestral recordings were held at the Sound Inn in Kojimachi. Based on the overall picture, the first recording covered about 70 pieces, mainly from Chapters 1-3. The second recording was about 10 pieces for Chapters 4 and 5, and the third contained about 10 pieces for Chapters 6 and 7. In addition, about 10 pieces were recorded on pipe organ at the time of the first recording. The original [1978] pipe organ tracks were recorded at Musashino Music University’s Beethoven Hall, but it was in a state of repair and could not be used, so instead the new pieces were performed at the Sumida Triphony Hall in Kinshicho. I wanted to make a mark with an impressive example of film scoring (recording in sync with a picture), but storyboards were not available when the new pieces were composed, so it became BGM with priority given to musicality, the general approach to all the tracks.

In retrospect, the new story elements do not expand until after the first eight episodes, so new pieces were reduced in all areas except for Kato’s drama. Since the older pieces related to Dessler and Teresa could not be used yet, it’s a point of personal reflection for me that in some places the BGM lacked variation and novelty. However, there were no such restrictions going forward from Episode 9, and it becomes more impressive when new pieces become fully active. Along with the previously released Ark of the Stars soundtrack and Yamato 2202 Volume 1, I hope you will enjoy the music world of 2202 with a total of three products and four discs.

This CD contains 19 tracks: eight full-length songs (2 versions of the opening and six ending themes), plus shorter versions of seven and TV-size versions of four. The only tracks not included from previous CD singles are non-vocal versions of the end themes. 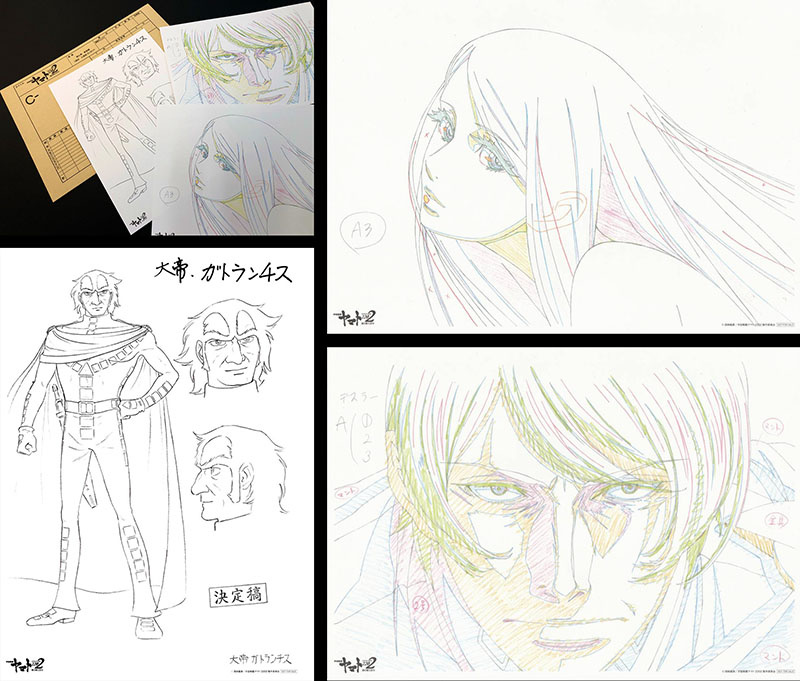 The “replica genga” artwork given away in theaters for the first week (while supplies lasted) were production images of Dessler and Teresa, and a vintage 1978 model sheet of Zordar. Three more sets would follow in coming weeks. 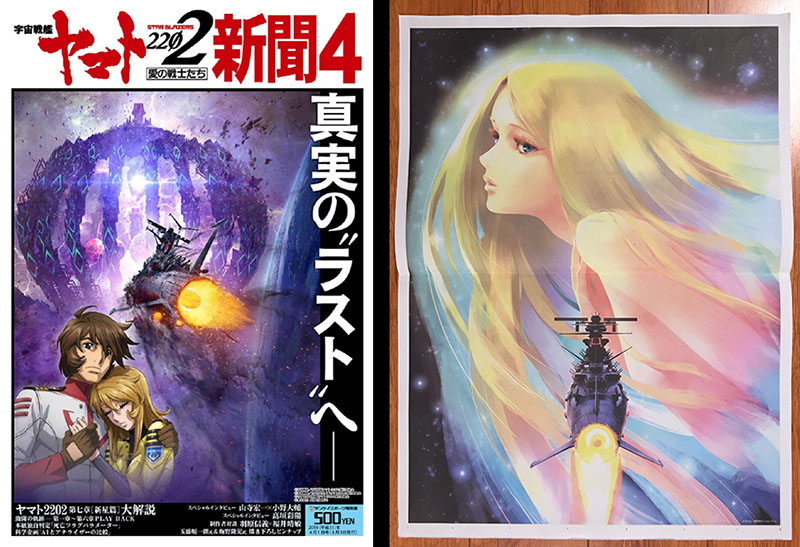 The fourth and final 2202 tabloid newspaper from Sankei Sports was another high-quality 32-page package from front to back. It opened with story digest material, then a chart of story differences from Farewell to Yamato 2 to 2202, a 2-sided poster, cast and staff interviews, and a scientific examination of Analyzer. 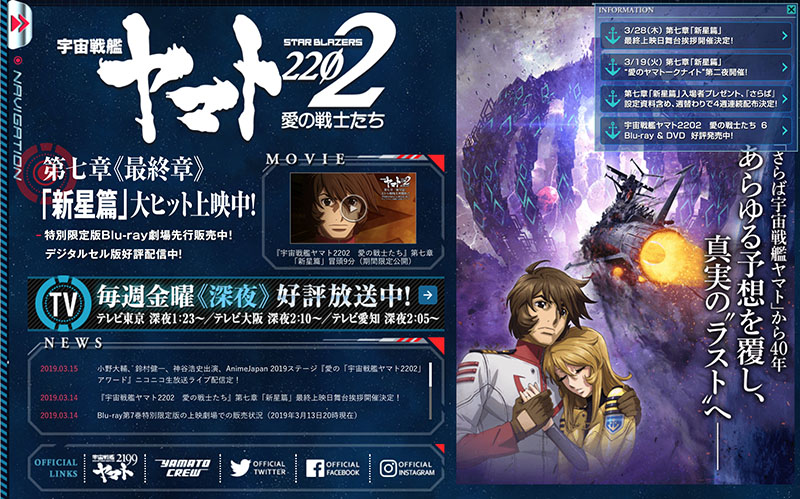 Zordar’s puppet Miru forces a “devil’s choice” upon Keyman. But Kodai rejects that chance and conversely offers a surrender to Gatlantis. No trigger will be pulled to the end the battle. That is Kodai’s choice. Enraged by this answer, Miru fires his gun. In a flash, the bullet penetrates Yuki’s body…

The Transit Wave-Motion Gun is fired into the Comet Empire. Yamato challenges it in a decisive battle for Earth. With cooperation from the Garmillas fleet and Toko Katsuragi, the Edge and the Great Sum invade the city empire with Yamato. Their aim is the emperor’s throne. Much blood flows and there are many sacrifices before Kodai reaches the sanctum of Zordar.

At Zordar’s will, the Ark of Destruction awakes. The wreckage of the city empire undergoes a transformation into its true form, the Ark of Destruction. It becomes a gigantic figure that overwhelms Earth and confronts the wounded Yamato, which no longer has the power to fight. As the captain, Kodai makes the final decision.

Those who survived gather at Hero’s Hill, which is lined with new monuments. It is the year 2203, six months since the battle with Gatlantis. It seems peace has returned to Earth, but the true “trial” is about to begin… 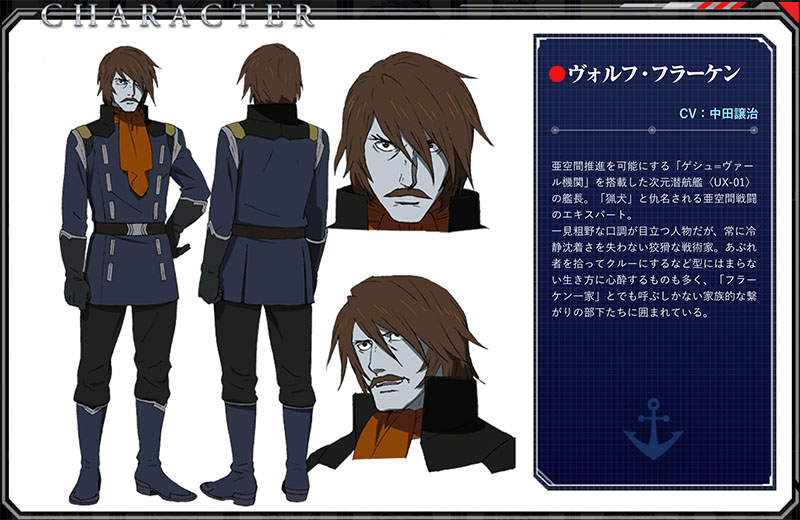 Captain of the dimensional submarine UX-01, equipped with a “Gesh Val” engine that enables sub-space cruising. An expert in sub-spatial battle, he has earned the nickname “The Hound.” He seems crude on the surface, but is a cunning tactician who never loses his cool. He takes joy from his unconventional way of life, sometimes picking up oddballs and turning them into crew members. Thus, he is surrounded by subordinates with a family-like bond that can only be called “Frakkenites.” 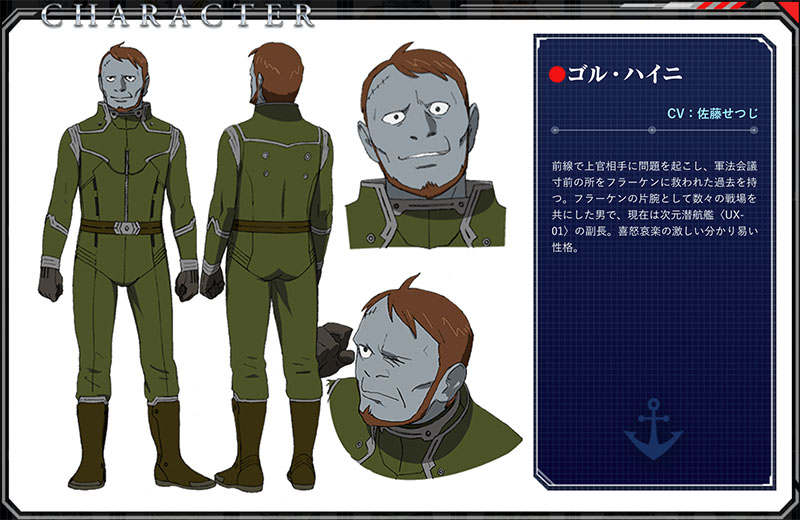 After causing problems for his senior officers, he was saved from a court martial by Frakken. He has shared many battlefields as Frakken’s right arm, and is now first officer on board the UX-01. He has an uncomplicated character and is very emotional. 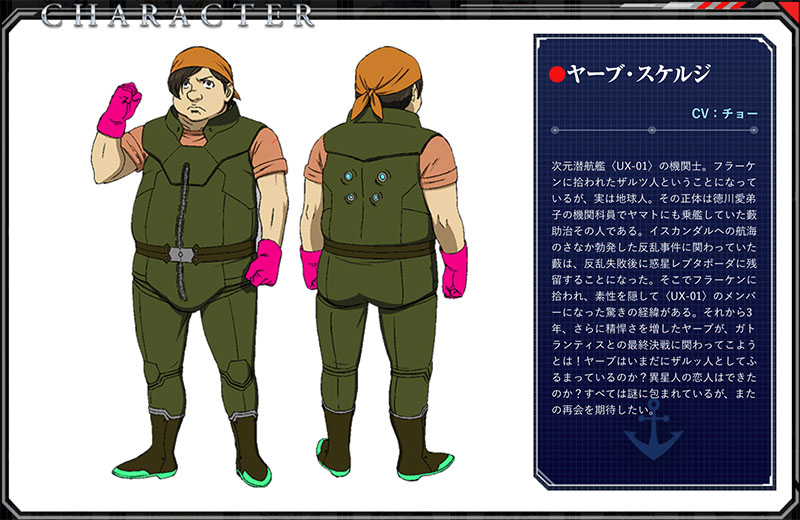 Engineer on board the dimensional submarine UX-01. He was assumed to be from Zalts when Frakken picked him up, but he is actually an Earthling. His real identity is a former student of Tokugawa, who boarded Yamato as a member of the engine staff. He became involved in a mutiny that broke out during the voyage to Iscandar and remained on the planet Leptapoda after it failed. He was then picked up by Frakken and after a surprising history in which he hid his identity, he became a crewman on UX-01. Three years later, Yabu has become more determined and fearless, and gets involved in the final decisive battle with Gatlantis! Does Yabu still act like someone from Zalts? Is he an alien lover? Everything is shrouded in mystery, but hopefully we’ll see him again.

Writer Harutoshi Fukui and Director Nobuyoshi Habara were interviewed by Mantan Web in an article relayed their thoughts on the development of themes that finally reached their resolution in Chapter 7. Read that interview here.

In an interesting fluke of timing (or a fantastically lucky guess), the episode that immediately precedes Chapter 7 was broadcast on the night of Chapter 7’s premiere. Anyone who was waiting to see the film on Saturday, March 2 would have been exactly in sync.

In Destined Showdown, Yamato is upgraded in a last-ditch effort to fight off Gatlantis, now on final approach to Earth. En route to the battle, “The Edge” himself appears to take his final shot: Dessler. Keyman confronts him in person, but a gun goes off and Dessler drops to his knee. Miru has one last devil’s choice to offer… 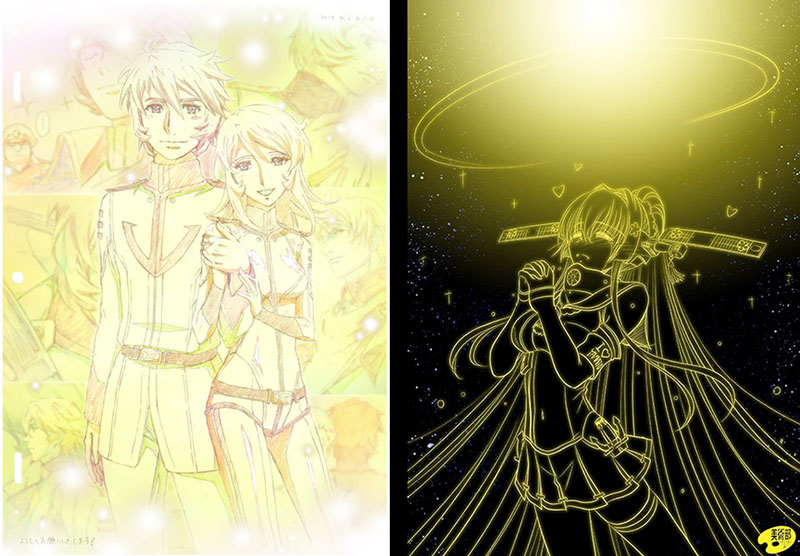 A flurry of fan art poured out to commemorate the premiere and visualize a grand event that was pure speculation at that point. Click on the artists’ names to visit their Twitter page. 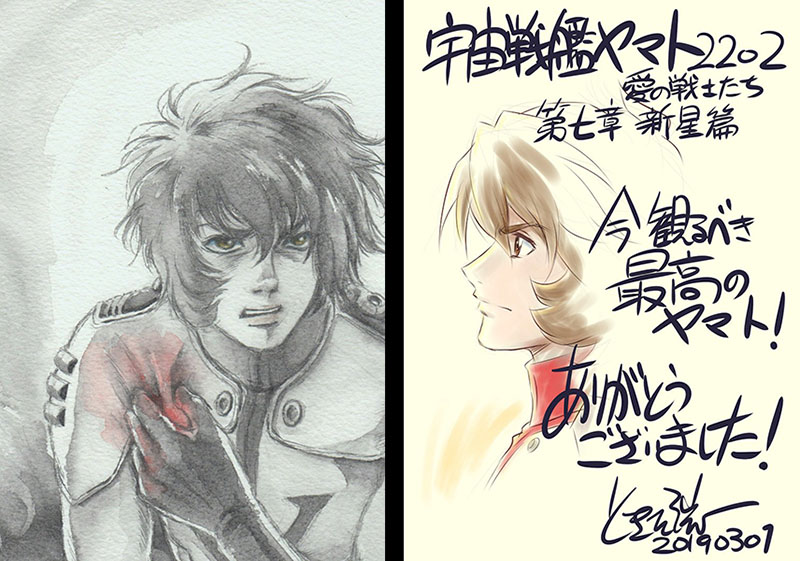 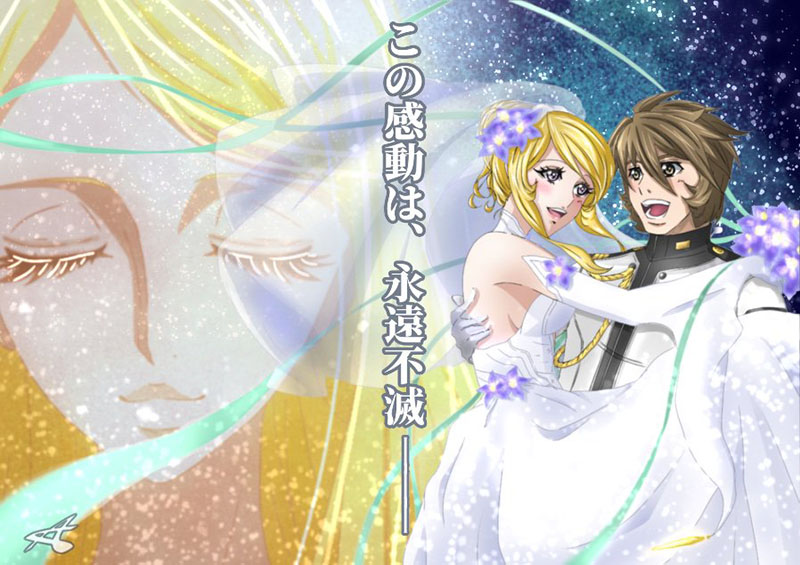 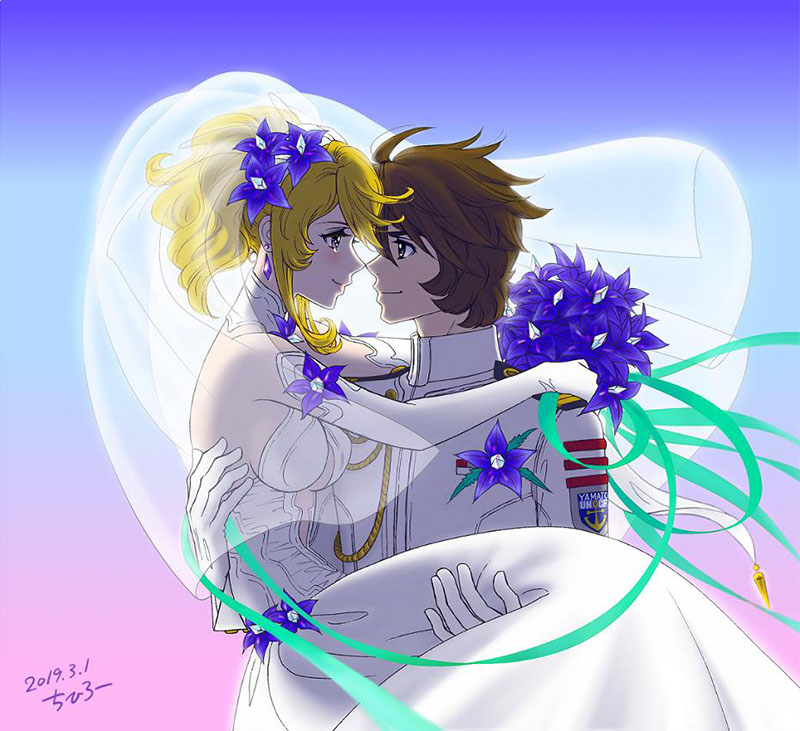 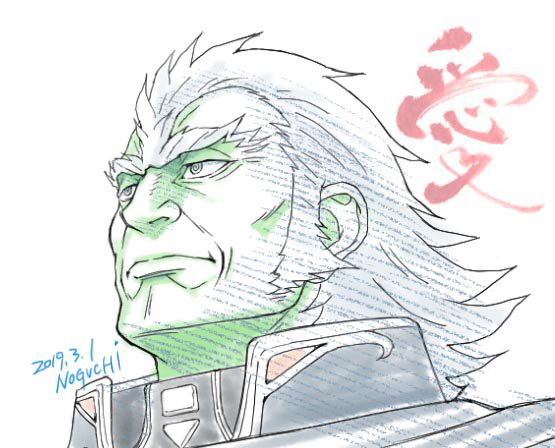