Following the path of Yamato’s original executive producer Yoshinobu Nishizaki in the late 1990s is a challenge. After declaring bankruptcy in the wake of his attempt to revive the saga (with Yamato 2520 and the first stab at Resurrection), he closed West Cape Corporation and dropped out of the anime business. Therefore, one has to look outside anime media to find information from this period, and due to the renegade nature of his lifestyle, one must turn to the gossip rags.

Focus, a weekly magazine published by Shinchosha, was one such rag; a celebrity-and-scandal chaser that kept tabs on cultural turmoil. Nishizaki wasn’t high on their list of targets, but they tagged him on at least two separate occasions. In the interest of complete record-keeping, here are both of the articles they published.

1. The extravagance of Space Battleship Yamato‘s bankrupt producer – about the relaunch As you know, Princess Mononoke became an unprecedented hit during this past summer vacation. Meanwhile, an anime production company went bankrupt this fall. On August 16, West Cape Corporation declared bankruptcy with debts totaling 4.8 billion yen ($48 million). The president is Yoshinobu Nishizaki (62), producer of the anime Space Battleship Yamato, which once took the world by storm. He also declared personal bankruptcy at the same time.

Since the Yamato movie’s release in 1977, all five of the films in the series have been hits. Spinoff products have made huge profits, and there is still a fan club. Mr. Nishizaki, who started off as an independent producer and became a billionaire, attracted attention to himself by holding parties at the Imperial Hotel and the first-class Ginza Hostess, and displayed his prosperity by driving around on a Harley-Davidson and buying a large cruise boat. The photos herein were snapped on Mr. Nishizaki’s trip to the Philippines for the 1992/93 New Year’s holiday. At this time, he and his guests had a luxurious vacation on his personal cruiser.

“Nishizaki brought female friends, diving companions, and five or six guests from Japan,” one of the participants said. “Additionally, there was a British captain and about ten Philippino crew members. And there was a Chinese cook and a Philippino cook. It went around the coast of the Philippines for about a month, trawling and diving. Sometimes they shot rifles toward the sea. There was also a lavish party on the last day of the year. At midnight, we launched the fireworks we brought from Japan, drank Dom Perignon, and celebrated the New Year. Nishizaki’s attache case was full of bundles of $100 bills.”

It seems this luxurious trip was the complete opposite of Yamato‘s painstaking voyage.

“There was one lady friend who was the only person who could go in and out of Nishizaki’s cabin. It was awkward to know where to look when she flirted with us.”

According to Mr. Nishizaki, “That was a misunderstanding. She was my secretary.”

Aside from that, he was planning the sixth Yamato film at the time [Resurrection]. Mr. Shintaro Ishihara participated in the script and it should have been a big project, but it could not be realized due to the bankruptcy. It’s also reasonable to observe that he was away from his company for a month, playing with money like running water, but it is said that one cause for the failure was a real estate investment outside of his core business.

According to Mr. Nishizaki, “The cause of bankruptcy is the debt of an affiliated company that went bankrupt. We’ve completed the script for the new work of Yamato. Many of my creditors are also cooperating in the production. I can’t do it right away, but I’m going to make it eventually.” Since Princess Mononoke made more than 14 billion yen at the box office, there is certainly a big world for hits. But the question is whether or not Mr. Nishizaki can make Yamato again.

In January of this year, manga artist and original author Leiji Matsumoto said he was surprised to see Mr. Nishizaki’s internet announcement of a new Yamato.

“I warned him quickly. Currently, the copyright of Yamato is in my possession. I don’t know about his luxury, but he didn’t care about his staff in the first place. I should have made a lot of money with Yamato. Mr. Nishizaki was paid about 20 million yen over 20 years, but royalties on the products haven’t been paid to me yet. In this case, the reporting made it out as if Yamato has been sunk, but it was Nishizaki’s company that sank. Yamato will certainly be revived.”

If “Yamato launches again,” it will make its voyage without Mr. Nishizaki.

Two months after this article was published, Nishizaki would be arrested for narcotics possession. Five months after that, a writer named Masaharu Koike took up the story in greater detail for Comic Box magazine. Read that article here. He’s more like Rambo than a producer. On February 1 (1999), Yoshinobu Nishizaki (64), producer of the big hit work Space Battleship Yamato, was arrested for violation of weapons control and narcotics control laws. The year before last, Nishizaki was arrested for possession of narcotics and received a prison sentence, but was allowed out on bail due to poor health. However, as bad as it was for him to possess narcotics, it was even worse for him to have “weapons” seized and confiscated from his home – a lot of them.

To introduce these weapons in a lineup, (1) two M16 automatic rifles equipped with powerful grenade launchers, (2) 1800 rounds for use in an M16, (3) 30 grenade rounds, (4) an Austrian-made Glock 19 with 128 rounds. Those with a mania for such gems are stunned by the names alone. Since it’s difficult for an amateur to understand, here is commentary by firearm expert Tokoi Masami:

“This grenade launcher has a maximum range of 400 meters. You can usually aim it up to 150 meters away. With a grenade as ammunition, you can kill any opponent within a 5-meter radius of impact. There are a variety of bullets for different purposes, but this one is powerful enough to break the iron plating of an armored car. The M16 can even penetrate a helmet and a bulletproof vest.”

Only “Rambo” would have these. What did Yoshinobu Nishizaki want to fight against?

Although it looks tame compared to this, the Glock 19 is also quite good. This type of handgun is widely used by police in the United States and can kill an opponent from 200-300 meters away.

Even if they don’t match Yamato’s Wave-Motion Gun, this is enough equipment to start a war. Could it be a hallucination of Leader Dessler? Concerning his possession of firearms, Nishizaki states that they are “to protect oneself against pirates.” It sounds like hype, but it seems not to be a hallucination.

“He used to take his cruiser out a few years ago, and sailed around Southeast Asia. He’d say, ‘This is where pirates might attack,’ so he loaded rifles on board from time to time. In fact, he also hired the Philippine Navy as a guard. That’s the root of these guns, too.”
(an acquaintance)

However, it is said that guns were shot toward the sea regardless of pirates.

“His cruiser was quite luxurious. He was accompanied by women and hired a local cook. The ship was laden with hundred-dollar bills.”
(the same)

He was cursed by wasted money in September 1997 when he declared individual bankruptcy simultaneously with the company he ran as his business. But even after seizure of his assets, he continued to stay at his apartment home. He was first arrested for possession of narcotics three months after the bankruptcy.

“Just before his arrest at home, a woman complained that Nishizaki had abducted her daughter, and there was trouble with an unpaid bill. He lived on the top floor of an apartment building where he did remodeling without permission and wouldn’t allow the elevator to go to his floor.”
(A neighbor)

Incidentally, even after his bankruptcy, he boasted that he was going to raise funds intended to make a new Yamato. But according to the original author Leiji Matsumoto, “He’s been saying since the old days that he made the original Yamato, and that’s a complete lie. I created all the stories and concepts, and I also hold the copyright. The new Yamato and Mr. Nishizaki have nothing to do with each other.”

Mr. Matsumoto plans to complete the new work by 2001. But Nishizaki is just at the beginning of his prison sentence of 2 years, 8 months. It seems this former “creator of Yamato” won’t be able to see this new work. Yamato merchandise bearing Leiji Matsumoto’s name as the copyright holder first appeared in 1998. The new project he mentions in this article was Great Yamato, which debuted as a manga in February 2000. Read all about it here. 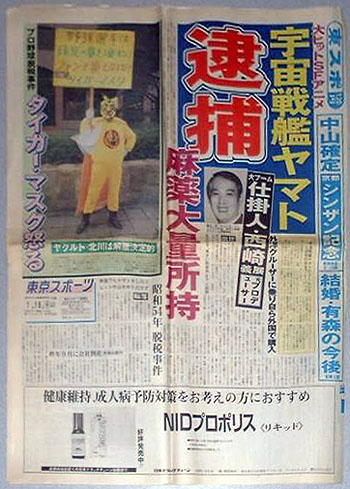 A newspaper published January 18, 1998. Red text on
the right side reads “ARREST” and “Large narcotics
possession.” Nishizaki is labeled a “perpetrator.”

A brief timeline of relevant events

August 16, 1997: Nishizaki simultaneously files for personal bankruptcy and the bankruptcy of his company, West Cape Corporation

May 2004: Tohokushinsha awards partial rights. Matsumoto is given limited visual rights and manga reprint rights. Nishizaki is named as creator and is restored the story rights. History has not yet decided if Nishizaki was a hero or a scoundrel, but none can deny that he was a very unusual man. This is the first full-fledged biography to be published after his unfortunate death in November 2010, covering as much of his history as possible with a warts-and-all approach. Early reviews of the book were as mixed as opinions about its subject, but it seems to have confirmed opinions on either side of the love-him-or-hate-him divide.

A book this significant demands translation, and it will be done sooner or later at this very website. Meanwhile, the table of contents is as good a summary as any of what this book has to offer:

Intro: A man who can’t be dismissed even after he’s gone
Chapter 1: Lone wolf in the anime village
Chapter 2: Theater, jazz, and music shows
Chapter 3: Yamato was not built in a day
Chapter 4: The glory within
Chapter 5: The victor’s dilemma
Chapter 6: Big company on the sand
Chapter 7: Countdown to ruin
Chapter 8: Prison wars
Chapter 9: The resurrected soul
Final Chapter: Farewell, Nishizaki