September, 2009: it’s beginning to look a lot like Christmas for Yamato fans. Space Battleship Yamato: Resurrection Chapter is now less than 90 days away, and the promotional machine in Japan is officially off the launch pad.

Urban multiplex theatres there aren’t as sprawling as most of their Western counterparts. Usually packed tightly into high-rise buildings, they don’t have space for big, self-standing displays that promote forthcoming films. Instead, there is a customary rack of free Chirashi, 2-sided color flyers you can grab on your way out. Chirashi and movie program books have been a staple of Japanese cinema for decades, forming the basis for thriving second-hand shops that cater to movie buffs. They were produced for all the original Yamato films and can be found in various places on this website. 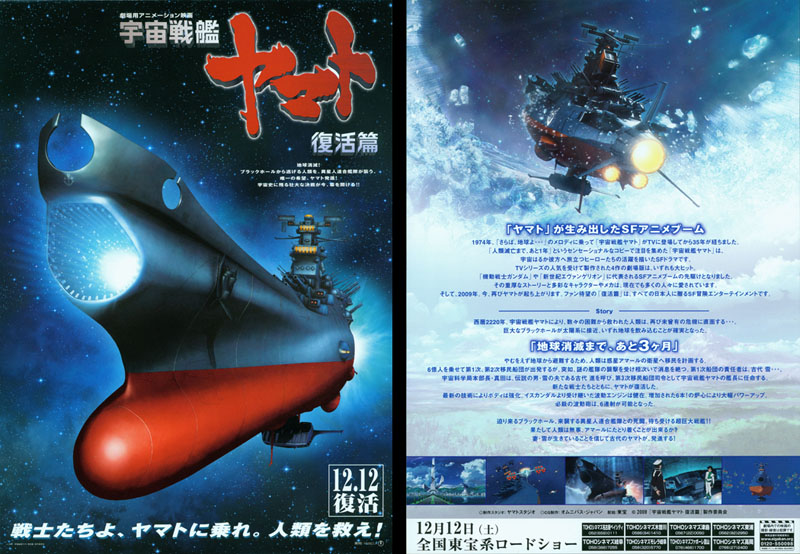 On August 10, a Chirashi for Yamato Resurrection flew into theatres and just as quickly flew out in the hands of fans, some of whom posted them on auction websites that same day. This Chirashi was a cut above the usual two-sided affair, opening up into a foldout that instantly proved the “old school” aesthetic is alive and well.

First we’ll have a look at the front and back (shown above). Here’s what they have to say:

Earth is headed for extinction! An alien ship strikes those trying to escape from a black hole. Yamato, the only hope, launch! The curtain opens on a grand, decisive battle in the history of space!

Soldiers, board Yamato! Save the human race!

In 1974, “Farewell Earth…” was first heard in the opening melody of Space Battleship Yamato and 35 years have passed since then.

“Just one year until the extinction of the human race” was the sensational slogan that attracted attention to the spacegoing heroes of this SF drama.

The TV series’ popularity lead to the creation of four movies that were all big hits.

Mobile Suit Gundam and Neon Genesis Evangelion were part of the SF anime boom started by this precursor.

The strong story and colorful characters and mecha are still loved by many people today.

Now, it is 2009. Yamato rises again and causes excitement. The fans have waited for the Resurrection Chapter, which is a gift of SF adventure and entertainment to all of Japan.

It is future calendar year 2220. The human race that was saved by Space Battleship Yamato faces an unprecedented crisis once again.

A huge black hole is approaching the solar system and is certain to swallow up the Earth. Earth will disappear in just three months.

To escape from Earth, humans are planning to emigrate to the moon of Planet Amal. 600 million people who leave in the first and second emigration fleets are suddenly attacked by a mystery fleet and all contact is lost. The one responsible for the first convoy was Yuki Mori…

Director Sanada of the Space Science Bureau summons Kodai, husband of Yuki and man of legend, and appoints him captain of Space Battleship Yamato, leader of the third emigration fleet.

Yamato revives with new soldiers. Its body is strengthened by the latest technology. The Wave-Motion Engine inherited from Iscandar is alive and well. Its core is powered up substantially, to six times its original strength! It is now possible to fire the Wave-Motion Gun six successive times.

An approaching black hole, a battle royale against a combined alien fleet, and a gigantic battleship is coming.

Can the human race safely make it to Amal?

Believing that his wife Yuki is still alive, Kodai launches in Yamato!

Below this text is a set of teaser images, only three of which (the top row shown here) were derived from the promotional DVD profiled in our previous report. The others depict an Earth landscape and Kodai meeting with a member of the new crew.

Opening up the flyer brings the rush of “old school” nostalgia: a profile of Yamato that matches so many of the classic images of the production years, a quick overview of main characters, and a “route map” that sets up the premise of the film. Click here to see a full-size image of this spread with translated text (warning: large file size). 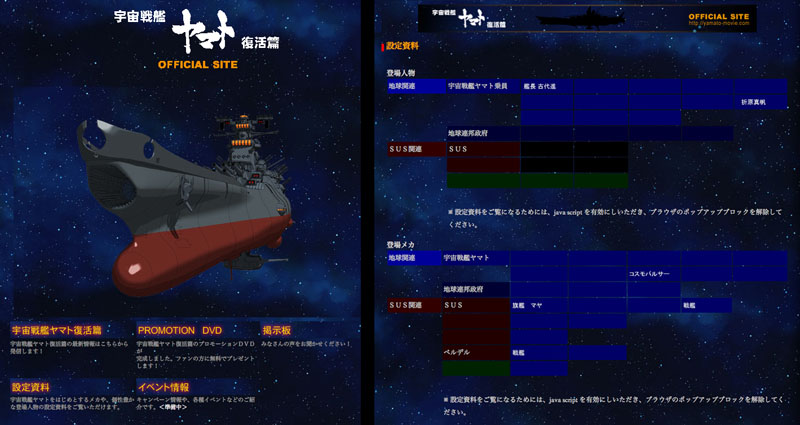 If this were still thirty years ago, pre-release promotion would be limited to print media, but with the internet slowly making paper obsolete, it’s only natural for Yamato Resurrection to have an online presence as well. In fact, there are two dedicated websites, the first of which (shown above left) went live in the spring from Yamato Studio. It was the only place fans could obtain a copy of the promotional DVD, and later expanded to include an image gallery (above right) and a comments forum. [Update: the site has been taken down since this article was originally posted.]

The images above of various alien ships can be found in the site’s image gallery, among others. To access it from the site’s homepage, click on the lower left link. The images can be accessed from links in the blue fields.

The second website (see it here) sprang up during the summer and sat dormant for a while, a single page with the announcement that advance movie tickets would go on sale September 5th. On that day, the site practically exploded with content. The home page is shown above left. The options listed beneath the logo read as follows (for the Japanese-impaired): Introduction, Story, Character, Yamato Mechanical Guide, and Movie.

The Introduction page is shown above right, a primer of text and stills to set the stage.

The Mechanical Guide (above left) presents the Chirashi foldout in interactive form, where clicking on a section of the ship opens the callout data. Similarly, the Story page (above right) includes the “route map.” 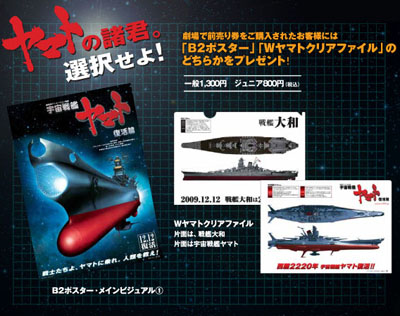 Clicking on the red text at the top of each page takes you to information about purchasing advance tickets at your local Toho movie theatre. The first 30,000 fans to do so received a free poster (a larger version of the Chirashi’s front side) and a plastic “clear file” with the IJN Battleship Yamato on one side and the refurbished Space Battleship on the other (shown below with one of the advance tickets). 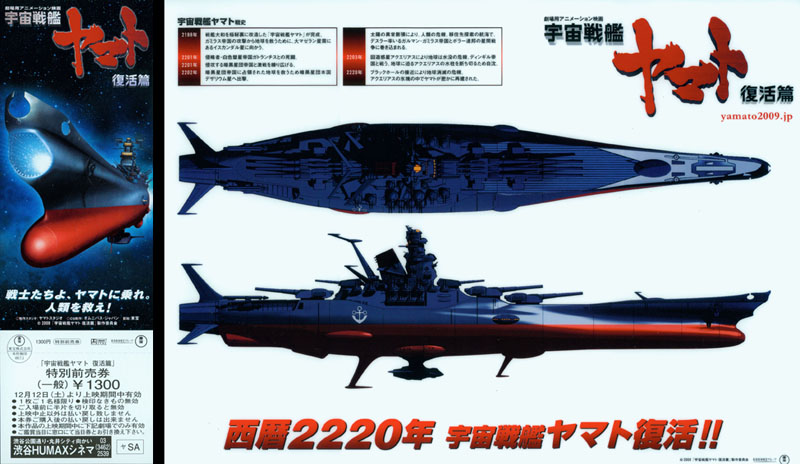 But by far the most exciting feature of this website is the Movie section, which contains two teaser trailers packed with new footage. Here are some of the highlights…

Yamato bursts back to life out of the Aquarius ice-asteroid dock and plunges right into battle. Its new fighter, the Cosmo Pulsar, is shown above right in what may or may not be the hanger bay.

Much is being made of the souped-up Wave-Motion Gun, which now has a giant revolver that allows it to be fired six times in a row. The blast effect looks quite a lot like the CG footage created for the Yamato 2 pachinko game released in Japan earlier this year.

It wouldn’t be a proper Yamato adventure without a despotic alien enemy, and we see them here in the battle scenes. The aliens this time come in multiple skin colors, all part of an interstellar collective called the SUS. The exploding planet shown above right is most likely being shredded by the “Cascade Black Hole” that forces humans to flee the Earth.

And here’s the man of the hour. Susumu Kodai’s expression reflects his hardened outlook on life; having fought so many battles and apparently lost his wife in the first disastrous exodus from Earth, his optimism isn’t what it used to be. The character design strongly represents the work of Tomonori Kogawa, who we profiled here.

At last, we get our first look at Miyuki, the daughter of Kodai and Yuki. When the film was first developed in 1994, she was a blond. Now she appears to have inherited her father’s hair color. Also in evidence are Analyzer and Dr. Sado, who reassures Miyuki that her father will fight to the death for those he loves. More information about Miyuki can be found below.

Of course, Yamato can’t go anywhere without a crew, and we’ll be meeting plenty of them when the time comes. The mop-head in the green uniform and the blond standing in for Yuki are both described in the Chirashi text.

Both trailers sign off with a big flashy logo and the December 12 release date. 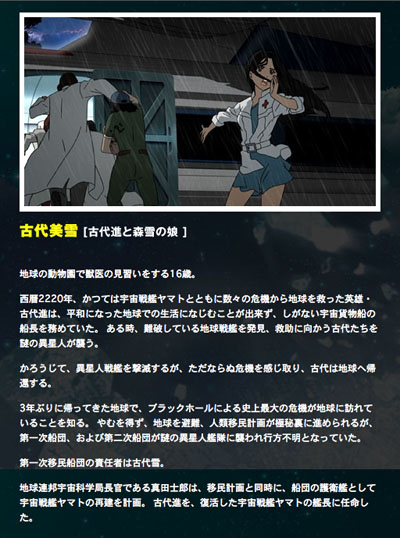 Clicking on the small image at the bottom of the website pages gives us another look at Miyuki and the following text, which reveals a few more details:

16 years old, working as a veterinarian intern at a zoo on Earth.

Her father was the hero who saved the people of Earth from many crises in Space Battleship Yamato. Now the year is 2220. Susumu Kodai has become unable to adapt to a peaceful life on Earth, and is now the captain of a minor cargo ship.

One day, Kodai discovers the wreckage of an Earth ship and rescues its survivors. He is attacked by an alien vessel and barely manages to destroy it. Perceiving a serious new crisis, he returns to Earth.

In three months, Earth will face the biggest threat it has ever known, the arrival of a black hole. A plan was made for humans to emigrate from Earth. The first and second convoys were secretly attacked by a mysterious alien fleet and never heard from again. The leader of the first convoy was Yuki Mori.

Shirou Sanada, Director of the Earth Federation Science Division and supervisor of the emigration plan, began reconstruction of the Space Battleship Yamato. Upon its revival, Susumu Kodai is appointed captain.

And finally, we can report that a slow trickle of merchandising has begun. Most of it consists of older products being reissued, such as manga and DVDs, but a pair of all-new items has emerged from the world of textiles.

The 13″ x 31″ bath towel shown above left combines old artwork with a blurb for the new film at the bottom. This sort of thing seldom shows up as a solo product, so it’s entirely possible that similar towels are on the way. The tote bag shown above center and right was a promotional giveaway at Japanese convenience stores back in June. Like the free gifts that come with advance tickets, the number was limited to 30,000.

This is undoubtedly only the beginning. It’s entirely customary for an anime film to open with a collection of same-day merchandising that we will certainly cover in future updates.

Since the May release of the promotional DVD, its 9 minutes of footage has appeared and disappeared from YouTube several times, often within a few hours. Since then, the studio seems to have relaxed its vigilance and as of this writing it can be freely viewed again here, but there’s no telling how long the opportunity will last.