Which manga do you consider to be your most representative work?

Your English-speaking fans aren’t familiar with Otoko Oidon. Why is it your most representative?

It’s the one for which I was awakened to write. Regardless of the setting or theme, it’s the one that told me what I am writing for. 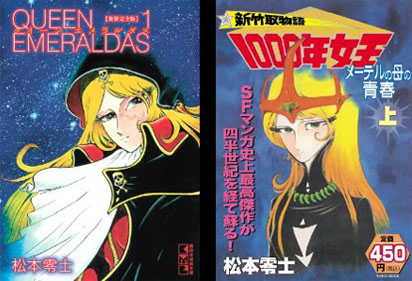 What do you consider your most representative anime work?

What advice do you have for your overseas fans who are confused by your “Ring of Time” concept, in which characters appear in multiple identities and the stories do not flow in a straight line?

I explain it as an ‘O’ or a zero. There is no end to it. Zero means there is no end, and it’s also my penname.

For me, all my works are one big work in a sense. When I write, I am aware of it as a single story. Therefore, I will bring it all together when I write my last story. However, if I begin to write that now, I’ll get the feeling that I’m approaching my own demise, so I don’t want to do it yet.

It’s a strange coincidence that in Russian, ‘Maetel’ is a word for ‘snow wind [blizzard], which is Yuki-Kaze in Japanese. Mamoru Kodai’s ship bears the name.

Maetel starts with meta, the etymology of Mother. The transition is Meta, Meter, Maetel and Mother.

How did you develop Galaxy Express 999?

Actually, at the moment I left for Africa, I was asked for the title of my next work, and after just one second I instantly answered, “the title is Galaxy Express 999. the heroine is Maetel and the boy is Tetsuro Hoshino.”

Roughly speaking, the transition from Yamato to Galaxy Express was as follows: Yamato was discontinued after 26 episodes, and I’d dreamed of taking an expedition to Africa since I was a child. I decided to go in a wild rush.

I saw Kilimanjaro and the Savannah and I thought of dueling a lion with a rifle in my hand, but it was no use. The sky seen above the Earth from Africa is so beautiful. The Savannah is flat, and the stars are steady because of the high altitude. They cover the entire sky, and Venus shines like a searchlight.

I stood on the Earth on a small hill called Leopard Rock with Kilimanjaro nearby, looking up into the dome of the sky. Before I was born, it was here. After I die, it will be here. Things like audience ratings and popularity are only details. I attained the realization that such trivia doesn’t matter.

Three days after our interview, Matsumoto appeared on the NHK TV series Live from Studio Park
where he talked about his trip and shared these photos.

After doing those things, I came back full of life and started on Galaxy Express. It was a true crossroads for me.

Also, I went walking around in Africa with a rifle just before an animal protection treaty took effect. So it was a last moment in history. When I traveled from Kyushu to Tokyo, it was on the last steam locomotive. Such experiences breathe throughout all my stories.

Just after that, I went to the source of the Amazon. I went to the interior and the heavens reflected in the water and touched the Earth. Looking up at the starry sky from the jungle is incredibly beautiful. I struggled with piranha and crocodiles and had the full experience of the Amazon.

From there I went to the headwaters and crossed from Lima to Rio de Janeiro to Peru in South America. Then I returned to Lima and climbed to the top of Machu Picchu.

Such experiences made me open my eyes. When I was asked why I went to an unexplored region, I said I wanted to encounter nature while I was still young and healthy and wanted to explore everything from the jungle to the bush. Therefore, I swam in the Amazon river without being eaten by piranha. In fact I ate both piranha and crocodile there. 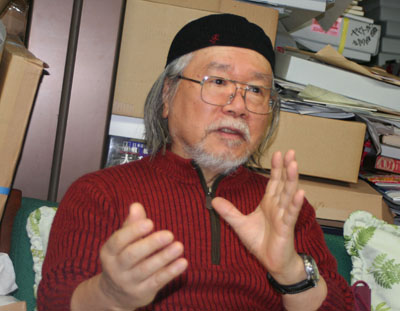 After that I went to big cities; America, China, Russia, and European cities such as Italy and France. I put off all the tourist attractions like skyscrapers or the Louvre. I was allowed to operate the 200-inch telescope at Mount Palomar, which I had admired since I was a child.

I flew over the Niagara and the Grand Canyon in a light aircraft. I went from France to Rio de Janeiro on the Concorde via Dakar. While flying, I was allowed into the cockpit for a long time and was able to run a crash drill with the captain. This sort of thing sounds crazy now, but the situation was much looser in those days. It was peaceful.

Because I had personally wandered around the world, the only places I haven’t gone are the north and south poles. I hung around the city of Moscow and took a round trip from there to St. Petersburg and toasted with vodka with the train crew on the way back. I stayed up and made noise all night without sleeping.

I was asked why an Oriental person would wander around downtown all night, and I was mistaken for a terrorist. I had a beard and looked suspicious. I was arrested in Peru, India, Africa, and the Netherlands. But my treatment changed completely when I answered that I was a manga artist. They lifted their prohibition on photography and showed me to the back rooms of museums. Then I understood that manga is universal and the world is actually calm and broad-minded toward a manga artist.

I found myself in rather unusual regions, where even tour guides never entered. But wherever I went, I got along peacefully with everyone and comfortably waved “Hi” and “Bye” when we parted. I had fun everywhere in the world.

How did you develop Galaxy Express 999 into Galaxy Railways?

999 is the root and trunk, and Galaxy Railways is the branches and leaves. The number 999 represents youth, which is completed with the number 1000. The Queen in Queen Millennia is the mother of Maetel; the number 1,000 and the completion [of a journey] represents adulthood.

What was your inspiration for Gun Frontier?

First, I was a big fan of Western movies. Gun Frontier is a story about two friends traveling together and each attains their goal and enlightenment.

I’d already pictured a story before Gun Frontier. Tenshi No Jiku Sen [Time-Space Ship of Angel] is about a famous Japanese writer and poet, Kenji Miyazawa [1896 Ð 1933] with a scene introducing an ancestor of Harlock. It takes place on a smuggling ship where the ammunition explodes and a pillar of fire rises above an inland sea of Japan.

The ancestor of Tochiro Oyama notices it from a mountainside when he draws his sword and it is reflected on the blade. He says, “the destined friend of my lifetime is there.” Harlock says the same. That lead to Gun Frontier, and Gun Frontier lead to Space Pirate Captain Harlock.

Speaking of guns and swords, I have a great interest in various historical artifacts including classic firearms and ancient ceremonial swords. Therefore, I have a big collection of firearms myself, such as Civil War-era guns, rifles of the Western film period, Winchesters, old matchlocks and a lot of percussive-type weapons from Russia.

In the Civil War, the American heavy cavalry had a gun called the Colt Dragoon, which is the basis of the space gun named the Cosmo Dragoon. I referenced the actual gun when I drew the manga.

Since I own so many of them, I am now in the position of approving ownership applications in Tokyo, since here in Japan you need permission to own them. In other words, you can own old guns and swords that came to Japan before 1867, no matter where they were made. I check whether the current bullets or ammunition match.

What is the current status of the Ring of the Nibelung series? Will it be completed?

Well, I haven’t written the last part of it yet. I should get to it soon. When I wrote Siegfried, it was the first manga to be delivered digitally in Japan and it got about 36,000 hits per day. It jumped to 360,000 when it went to English. The peak was 1.2 million and the line had to be shut down. Therefore, I noticed that it’s a big world when language barriers are gone.

Is there one particular version of Captain Harlock that is closest to your core concept?

They’re all the same. Those three, Harlock, Emeraldas and Tochiro are all the same. Toshiro Oyama is a distant descendent of Nobbotta Oyama. Toshiro became Tochiro because it was easier for non-Japanese to say.

He is now the heart of Arcadia, the pirate ship previously named Death Shadow, and is the sweetheart of Emeraldas. Therefore, Harlock defends his best friend’s love. Emeraldas protects the ship of her sweetheart. They are tied together by a mutual bond of protection and friendship. The character named Mimei travels with Harlock. Her name comes from The Ring of the Nibelung, and she is the last of the Nibelung family. If she dies, they will become extinct. It’s also where the name of our cat, Mi-kun, comes from.

If you could cast anyone in the world for a live-action Harlock, who would you choose?

(Pointing to Russian Anton Kholodov) It will be very difficult if he doesn’t have a face like this. (laughter) 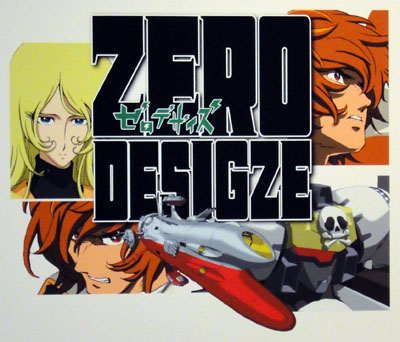 There is a live-action Galaxy Express in development now, and there are Japanese actresses who look like Maetel and Emeraldas. However, finding Harlock is the weak point at the moment. I’m thinking there is no other way but to look at a variety of actors abroad.

What can you tell us about your new anime project, Zero Desigze? [Pronounced “De-size”]

It’s still in the planning stage, so I don’t know much about it myself yet. I guess it will be released next year [2011], but it depends on the planning. It will most likely be an OVA. Possibly a TV anime. [Followup note: as of 2013, it seems this project has topped out as a pachinko game.]

Continue to Part 3: A Creative Life