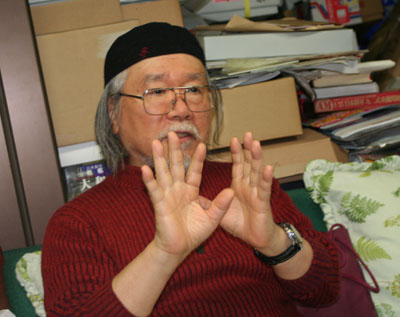 Other than manga and anime, what other visual works inspired you?

The movies I watched from all over the world. I saw movies from Soviet Russia, not to mention Japanese movies in Northern Kyushu. I could compare them all and see the differences in their sense of color; American Technicolor, Eastman color, Russia…formerly Agfa Color of Germany, and I noticed that the Japanese Konicolor was also different.

My favorite line was from Gone With the Wind: “As God is my witness, I’ll never go hungry again!” Those were my thoughts exactly. My belly was shrunken. In the movie, Scarlet pulls something out of the ground and bites at it. Her feeling was my feeling, determined never to starve.

Moreover, that scene with the long silhouette was actually realized by Disney animation. I was curious about how such a shot could be done, the camera pulling back a long way on tracking rail? So I asked two young engineers at Hollywood and they told me it was animation.

As I remember, these two young guys asked me with serious faces, “How do you feel about Hiroshima and Nagasaki?”

I said, “Thanks for asking,” then answered, “I sense your feeling of sincerity.”

I understood the feeling in their hearts about human life. We were both able to understand each other as human beings. They had the same thoughts about Pearl Harbor in their hearts, and I’d have the same complex feelings if I visited Hawaii. I was grateful that they took the trouble to ask.

Speaking of other movies that left an impression, in Little Women [1949], there is a girl whose house goes bankrupt. The younger sister says, “at least I have a book.” I thought, “Ah, I have a manga.”

After that, Marianne of my Youth [1955], a movie that takes place in Heilegenstadt. The heroine of this movie was the prototype for Maetel, their faces are very similar. And it’s the story of a boy whose friend tells him, “you will surely meet her, believe me.” That line ends the movie very neatly.

Because I became familiar with films from America, France, Germany, and all over the world, I noticed the difference of expression in each country.

In Marianne of My Youth, there is this exchange:

“I knew you were coming.”

“I’ve come back from Argentina, the farthest place in the world.”

In the French-language version, the term is “galaxy” [galaxie] and the German version says “beyond time and space” instead. There is a difference of expression.

The original novel by Peter De Mendelssohn was titled Painful Arcadia, and what I noticed is that the difference in expression is really interesting. I understood well that the sense is different because of the language.

Your English-speaking fans have been mainly exposed to your SF works, but your non-SF works are very popular in Japan. How are they different from your SF works?

In my mind I did not write or draw to make them different. But only the SF stories were made into anime, they seemed favorable or proper for that medium.

Actually, I write a lot of fantasy stories such as girls’ manga and animal manga like Maria of the Valley of Silver, or Koushika of the Forest of Fire. Koushika is the Russian word for cat. It’s the name of a store in Nihonbashi. I asked the Russian lady owner what Koushika means and she told me.

Then, what did you think of the title Nausicaa of the Valley of the Wind?

Well, what Nausicaa actually means is ‘Now I keep a cat.’ It is short for ‘Now, Koushika,’ Now-Shika. So I am the inventor of the name Nausicaa.

Also, in the plan book for Yamato, a couple of escort frigates named Koushika and Nausicaa were indicated as well. The new book Yamato Great Chronicles should have this info. Anyway, that plan book was seen by a lot of industry people, so there was no help for it. The one who uses the name first is the winner and I have no complaint on that matter. 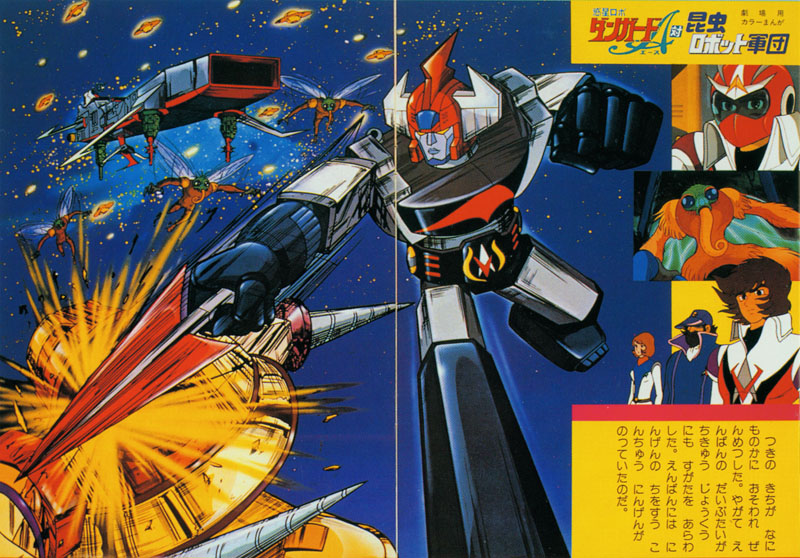 “Gundam” appeared in the proposal for Danguard A [1978]. There were candidates for the name of a space carrier with ‘dam’ at the end, such as Vandam, Jasdam, and Dondam as well as Gundam. That was self-inflicted, because I had previously written the manga called Gun Frontier. That would have been a bad choice, so the name became Jasdam.

But the plan was passed around in print, and if someone else noticed it, that’s fine. Both Gundam and Nausicaa did well. On a revolving stage, all things come back to you if you persist, so I don’t take it adversely and I root for everyone to have good luck.

Some of your assistants, such as Mr. Kaoru Shintani [creator of Area 88] and Katsumi Itabashi [mecha designer], went on to have successful careers and became well-known for their own works. Are there others who your American fans should know about?

There are many others who have worked with me, because I’ve been doing this for a long time. It’s a freelance profession with no guarantees, so the work is always severe. I asked each of them if they were ready to accept it, and everyone said yes. Therefore, I’m not prepared to answer this question since I would have to say, “every one of them.”

What’s your reaction when you see your work parodied in other works, such as Harlock in Project Ako or Maetel in Excel Saga?

I think it’s great fun. Aside from that, occasionally I am asked by some avid artists who love my works. They sometimes hope to inherit my characters and stories, continue their own ways. This is a separate case and as I am now the head of Manga-ka Kyokai [Comic Artist Association], I have to see their works before I can approve them or not. 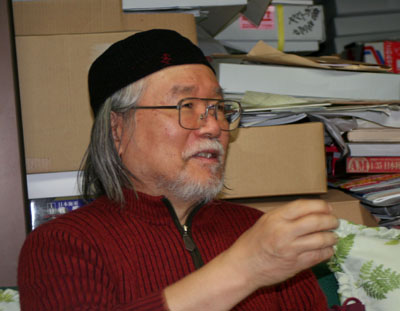 What do you think of your impact on those who see your works and are inspired to join the navy or become an astronaut?

Once we were the same, inspired or affected by what we had seen or heard in our childhood. That led us to specific occupations. So as an artist who presents creative materials, it is a great pleasure to know of such an impact, rather than feeling a possible responsibility for misguidance.

Are there any questions you’d like to ask us?

When you first saw Japanese anime and manga, did it seem strange to you?

Tim Eldred: No, it was the opposite, we found it exciting. In America we could only see animation once a week on Saturday mornings, and the shows were all very similar. When anime from Japan appeared, it was like a bomb went off. The differences in the stories and characters was instantly obvious.

Gwyn Campbell: In Australia in the 1970s, the production credits were localized only to show English names, which gave no clue that the shows were made in Japan. Yet even without this, it was obviously not a domestic production. It was totally addictive, and it made me want to go to Japan where anime was made. However, my grandmother was strongly opposed because my grandfather had fought against Japan and died in World War II. Eventually, after a long argument, she accepted my desire to go. Her watching Yamato and the death of Captain Okita was persuasive.

I once visited the Republic of Vanuatu, east of Australia, and stopped at a convenience store to find a Harlock standee at the entrance of a nearby restaurant. I never imagined I would encounter my character so far away on an overseas island. It was my starting point for collecting different-language versions of my works while traveling worldwide.

Matsumoto appeared at Oizumi Gakuen station on November 6, 2010, to accept his medal for the Order of the Rising Sun 4th Class, an award recognizing contributions to Japanese society. In addition to the station, his work also decorates the local lampposts.

Do you ever use the train station at Oizumi Gakuen? [A station with Galaxy Express decor]

Yes, I often go there. A lot of my pictures are there. It feels strange.

The station is going to be greatly remodeled. After consulting with the Nerima Ward, there will be a 26-story building. The size has already been decided and my art will cover a large percentage of it.

Are you treated like a rock star when you go out in public?

Yes, sometimes it’s like that. It’s difficult to escape when I’m surrounded, so I often go out in disguise, or by car.

I also have a Class-B license for racing car driving, and sometimes I drive on Fuji Speedway. I haven’t yet been in a race, but I’ve gone on some test runs and have gotten it up to 350kph.

Finally, here’s an imaginary question: you have a time machine that operates on 100 yen coins, and you have three coins. So please answer:

1. What point in history would you visit?

2. What advice would you give to your past self?

3. What would you do with the last coin? 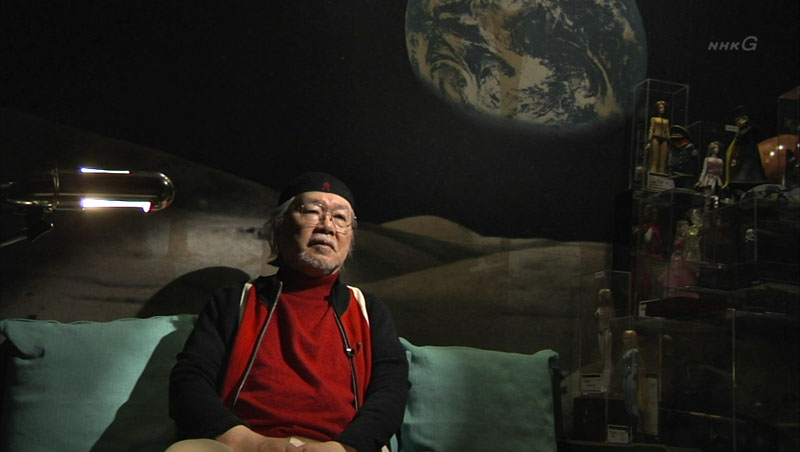 Matsumoto in front of his Apollo mural, from a 2010 NHK TV special.

The picture on my wallpaper was taken by the astronaut of Apollo 17, Commander Eugene A. Cernan. I would want to go to the moon and see the Earth for myself.

I only have photographs, and I’ve drawn the Earth many times. Unless I see it directly with my own eyes, I can only perceive it as photographic data. I can’t see it from all sides. So a drawing can’t be three-dimensional if it’s really a copy of a flat photograph.

Even if it’s just a drawing seen from only one direction, a human who knows what is on the other side can see through it. Therefore, I’d want to be diligent and see it from every angle if possible. I’m not satisfied with never being able to see the Earth first-hand from outside.

So if I could prepare for launch and fly into space even with a chance of not being able to return, I’d want to see it with my own eyes. I think the atmosphere of Earth would change as I watched it and drew it.

Last year at six in the morning, I got a sudden call from Koichi Wakata. He was calling from space station Kibou, a Japanese module of the International Space Station. I designed two types of space watches and all the crewmembers were supplied with one of them. That was one of the reasons he called me, to say all the watches worked fine. 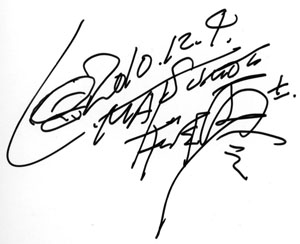 I asked where he was, and he answered “above middle south America.” While the ISS flew eastward and he saw the beautiful curve of the horizon, our talk went on for about five minutes. In that way, the age in which we can talk directly to space has already come. However, I still haven’t seen it for myself. I’m unsatisfied that it still feels unfinished. I think I could draw a better planet if I could actually look at it.

More of this interview can be found in the June 2011 issue of Otaku USA Magazine, shown below. Click here to read a PDF with all pages