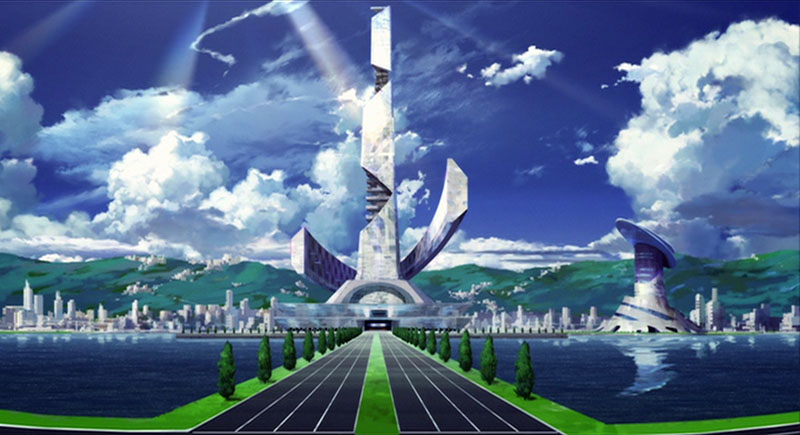 The songs of small crows could be lightly heard. Earth’s environmental destruction had intensified amidst its remarkable space development, but nature still persisted.

At the main office of the Space Science Bureau, a noise-proofing system didn’t allow external sounds into the building, but Shiro Sanada sometimes listened to wildlife on a special speaker system. Now the director of the Space Science Bureau, he’d spent thirty years working for the Earth Defense Forces. An active, middle-aged scientist, he had fought many battles as Space Battleship Yamato’s chief science officer. While the cries of small birds washed over his heart, he bitterly moistened his dry lips.

Earth was still beautiful. But it had become severely exhausted by population growth and the destruction of nature. Still, since space wars had calmed in recent years, an ecological movement had emerged little by little. Catastrophic flooding by the water planet Aquarius was avoided thanks to the precious sacrifices of Yamato and Captain Okita. The grief over losing Captain Okita was considerable, but Sanada felt that Earthlings should have learned more from it. Back then, however, it was impossible to predict the current situation…

Sanada leaned back in his chair in the secretary’s office, closing his eyes and listening to the birdsong. Jiro Shima couldn’t bring himself to speak.

Seventeen years earlier, Jiro’s older brother Daisuke Shima was killed during a battle on Uruk, city satellite of the Dengil Empire, which attempted to artificially move Aquarius toward Earth. 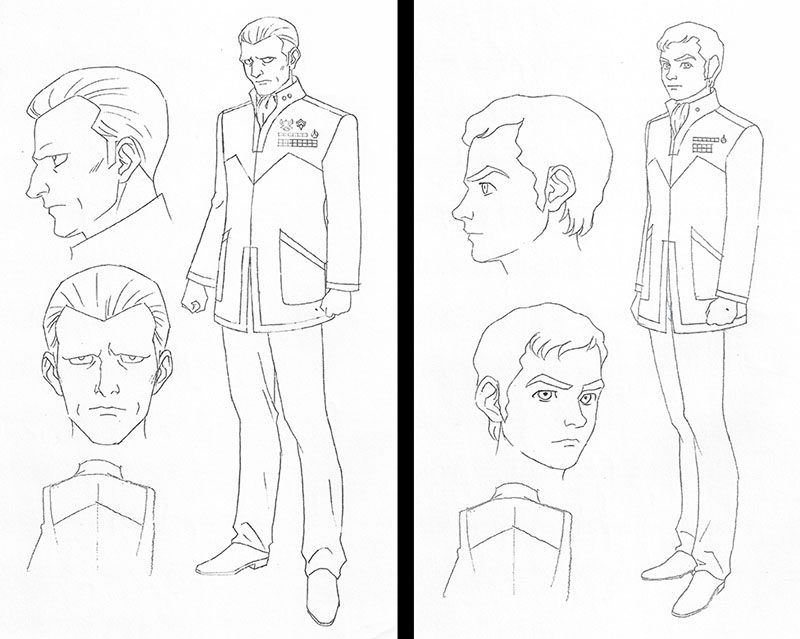 “Oh, Jiro? I didn’t notice you.” Sanada had finally realized Jiro was standing at his office door. “How long have you been here?”

“I was listening to the birdsong for a while, too.”

Sanada nodded to encourage Jiro and they both listened to the voices of the birds flow from the speaker for a while.

Sanada finally sighed and turned the speaker system off.

“The destination for our emigration from Earth has finally been decided,” he said in a strong tone. “Would you call all the science department team leaders to the conference room?”

Jiro was the supervisor of the emigration program. Eighteen years earlier, his brother Daisuke, as chief navigator of Yamato, had been involved in exploration for a Second Earth in an emigration plan sparked by runaway nuclear fusion on the sun.

Jiro dashed out of the room. Sanada rose from his chair and turned toward the window. The sky was clear and blue. The Space Science Bureau’s main office was located in the center of a city, a building coated in a reinforced alloy that gave off a dull glow. It looked like a huge antenna pointed outward toward deep space.

Seven years had passed since Sanada accepted the post of Director of Space Science. The Earth Defense Forces and the Space Science Bureau had used Space Battleship Yamato to save Earth from many crises, and the bureau continued to play a central role in the Earth Federation. But not even they could handle the crisis to come.

“I can do nothing to keep Earth from being swallowed up,” Sanada muttered with a bitter expression.

All living things and mother Earth…they would have to be left silently behind, unable to be protected. He had unconsciously written the word Earth on a memo pad on his desk. It pierced his tormented heart like the point of a drill. 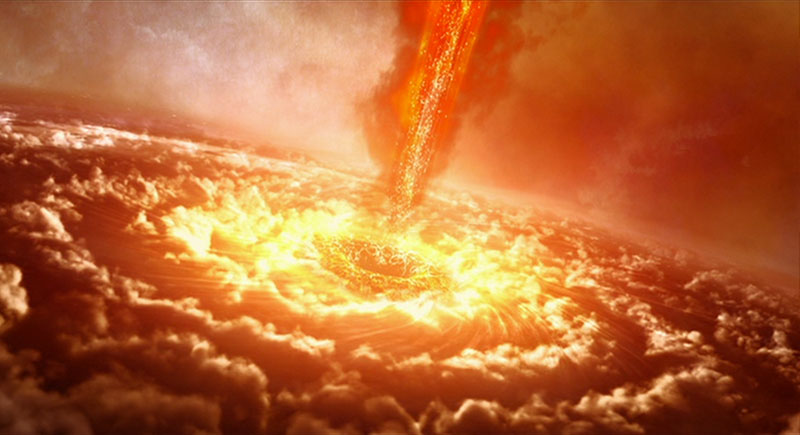 In the year 2202, Earth faced a hopeless crisis.

From the center of the galaxy, a moving black hole approached Earth moment by moment. A black hole that swallowed everything in space in an instant, absorbing all matter, light, and even space itself. It was also a pressure field that continued to shrink due to its own gravity. It could be called outer space’s own pit of Hell, massive and powerful with three hundred times the mass of the sun. It had suddenly taken a course approaching the solar system and would soon make easy prey of the Earth.

This moving singularity was called a Cascade Black Hole, and when it inhaled planetoids they were crushed into grains of dust without a trace. No matter how the data was calculated, its horrific orbit would cross Earth’s every time.

The Earth Federal Government gathered top class astrophysicists from around the world to work on all possible countermeasures, either deflecting or disrupting the black hole’s course, terraforming a frontier planet, or even shifting the orbit of Earth itself. They came to the conclusion that no theory could be achieved with present scientific power. Since there was no way to avoid the black hole, there was no choice but to embark upon an escape plan (exodus) for the human race.

The Cascade Black Hole had been discovered three years ago. A special research team was formed immediately, and planetary exploration to determine the feasibility of emigration was conducted day and night.

In the past, the solar systems at the center of the Milky Way Galaxy had been hit hard in a collision with a red galaxy that warped in from another dimension. Those wounds had finally healed, and with advancements in warp navigation it was possible to reach a wider range of planets…but none of them met definitive conditions. Each had its own drawback.

As tensions rose day by day, the Space Science Bureau’s emigration team, centered around Jiro Shima, repeatedly sent emigration requests to nations in every solar system within communication range. But no response was received from any government of any possible planet for emigration.

Nevertheless, the Earth government exhausted its federal budget on the building of 530 emigration ships. The total population of Earth was about 2.7 billion people. Designed in a form reminiscent of the Old Testament ark, a single emigration ship could be considered a mobile city carrying about 100,000 people. If that wasn’t enough, the overage could be handled by shuttle transport.

However, days and months passed with no decided destination, and now only three months remained until Earth would disappear.

At first, the federal government had intentionally concealed the black hole from the human race. But when it was finally resolved that no countermeasures could be taken and emigration was the only remaining option, the president of the federal government was forced to issue the agonizing statement to all humanity.

It was broadcast from the President’s office in the top floor of the World Federal Government building in Paris, and he addressed the world through all media. It was called “The Ending Statement.” Naturally, many were confused. A federal spokesman said that the expected destination would be revealed later, which only heightened anxiety. 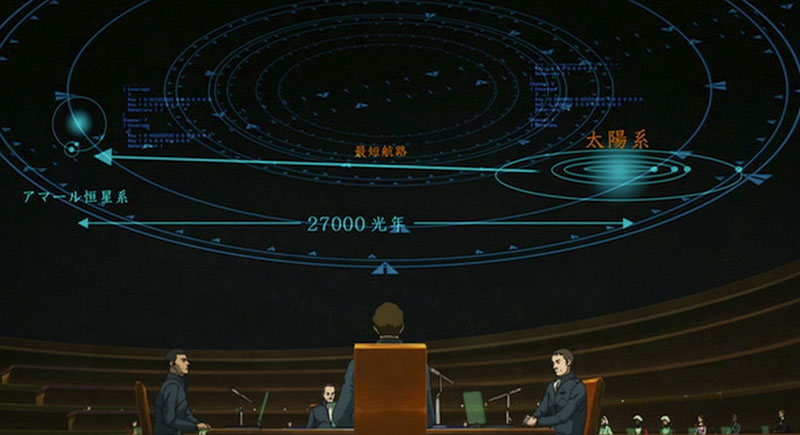 Finally, a planet that accepted Earth’s bid for emigration appeared. It was the Nation of Amal in the Sairam Solar System. Amal’s Queen Iria offered to open a moon of her planet to humans from Earth. It was 2700 light years away and had almost identical atmospheric conditions, which made its environment ideal. Only merchant ships traveled back and forth, and there was great concern on Earth that there were no diplomatic relations with Amal.

But now the black hole was coming, and there was no alternative but to accept Amal’s offer.

“The destination for Earth’s people has been decided…Kodai.”

Susumu Kodai’s name spilled out of Sanada’s mouth. Kodai was not currently on Earth. Instead, he was sailing out in the distant galaxy. It was Kodai who Sanada fought together with on board Space Battleship Yamato twenty years ago, when he was Yamato’s 28-year-old science officer. Kodai was only 18 then, but had grown steadily through their first voyage, eventually being appointed as the deputy captain. Every time Earth found itself in crisis, they had gone off together on Yamato to face it.

“If Kodai were here now…” Sanada couldn’t help thinking it. What kind of decision would Kodai make…?

Sanada left his office and headed for the conference room, walking with heavy steps. Among the leaders that had gathered in the conference room was the figure of Yuki Kodai, Susumu’s wife. She had gotten older, but her beauty hadn’t declined a bit.

Like Sanada, Kodai and Yuki met on the trip to Iscandar, and gotten married years later. The two gave birth to a daughter, Miyuki. Soon to be 16 years old, she was doing an apprenticeship at the Sado Field Park.

As Yuki watched from the front row, Sanada stepped up to address all the leaders.

“Based on the available materials, I will explain our emigration plan to our destination, the moon of Amal.”

Using a huge panel screen, he began to talk about the overall plan. The staff listened attentively with tense faces, and when he finished speaking the room fell into a state of panic.

“Is there a guarantee that Amal is not dangerous?”

“I don’t think Queen Iria will offer her moon to us for free.”

“How certain is the federal government’s survey?”

The questions flew one after another.

“Everyone has a right to be concerned, but there isn’t enough time to go around the room…”

Everyone went silent at the sight of Sanada’s forlorn expression. There was no more time. There was no choice but to entrust Amal with the fate of Earth. Sanada finished with a command.

“The first emigration convoy and its escort will depart in ten days. We at the Space Science Bureau will have command. We also appoint Yuki Kodai as the leader of the emigration fleet.”

Upon receiving her mission, Yuki could not immediately respond.

(I wonder if I can play such a big role…)

A whirlpool of anxiety spread throughout her body.

(Still…no, I have been chosen to protect the Earth. If I don’t face up to this situation…)

She shook off the feeling of being lost without Kodai there.

Yuki pressed her lips firmly together and saluted Sanada. Jiro, who immediately understood her heart, watched her trembling figure. It was hard to take on such an important role with Kodai absent. Jiro wished he could step in and take her place.

“Are you all right,” he asked with a complex expression.

(If this mission has been given to me, I will do it perfectly…)

Moment by moment, the time for an eternal farewell to Earth drew near…and Kodai did not know about the crisis.

Two objects shone softly in the empty night sky, the moon and the mass of Aquarius ice inside which Yamato slumbered.

One thought on “Yamato Resurrection Chapter 1”