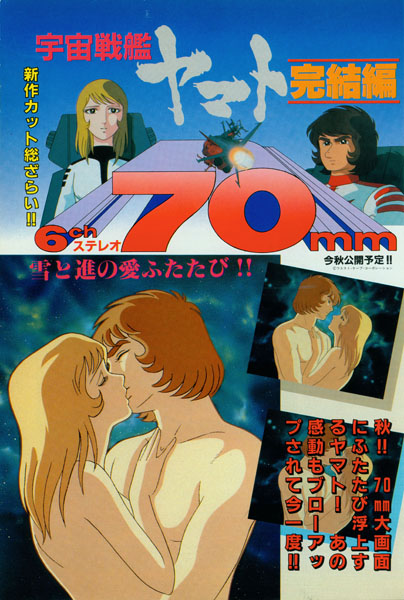 When Final Yamato began production, I planned to make it in 70mm with 4-channel or 6-channel stereo. We were conscious of the 70mm layout when producing the storyboards, and the policy did not change until around November, 1982. At that time, there were only 20 theatres in Japan that were capable of showing it.

In terms of the layout, we worked in the 70mm Vista-Vision format. The change away from this was not detrimental. It had made us more aware of scale. The change was made partially because of the theatre limitations, but also because the production schedule was becoming too short.

It was strongly affected by the release of E.T. The Extra-Terrestrial. There were few theatres in Tokyo that could handle 70mm film with 4-channel stereo, and the presence of E.T. would prevent them from offering us a long run.

It has long been my dream to see Yamato dignified by sailing on a big screen in 70mm. Because the first movie was a hit in 1977, the following for anime movies got started. Before then, anime had no such position.

Major motion pictures are now made for the 70mm big screen even if their content is worthless. I wanted to demonstrate that animation could also live up to 70mm. Even if I looked audacious for doing so, I wanted to attempt this just once for the future of anime. I wanted to show what could be done with it.

A full demonstration had to have a solid framework. The right combination of story, music, and animation can live up to the big screen, though of course 70mm is not a necessity. But I was convinced that Yamato would inevitably be shown that way. It was always my feeling as a producer that it would have a powerful appeal to the viewer.

If I were to make it that way, every corner of the screen would have to be perfect. Even in the best small-screen picture, imperfections appear immediately if that picture is expanded. The first Yamato TV series survived this transition because the layout of scenes had already been composed cinematically.

Other animation made for TV has been shown in theatres, but the results vary. I have great confidence in Yamato. 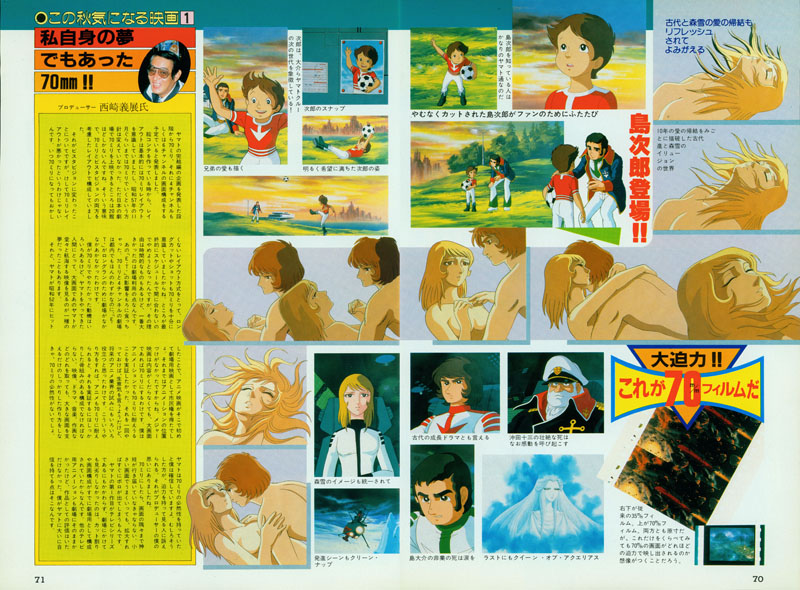