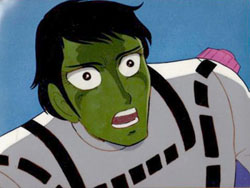 It goes without saying that the biggest Space Battleship Yamato event of the last year was the opening of the Yamato Resurrection movie, but there was plenty more going on to keep fans busy. Here’s a look back at one of the busiest Yamato years in quite some time. (See the Yamato Resurrection merchandising reports for everything connected to the movie.)

The first Yamato-related event of the year was unfortunately the loss of voice actor Osamu Ichikawa at 72. He played the minor but memorable role of Miru, the Comet Empire officer assigned to keep tabs on Dessler. Star Blazers fans knew him as Morta.

The second event of the year was the rollout of Fuji’s Yamato 2 pachinko game in Japan, for which an entire new product line was created. The real attraction, however, was the game’s astonishing CG footage. Read all about the game and its products here.

The most inexplicable Yamato product of the year also appeared in February: Kodai and Captain Okita rendered as plush Monchichi monkey dolls. Somewhere in the world, someone felt this was necessary.

The start of production on Space Battleship Yamato Resurrection had been announced online in the summer of 2007, but it took until this month for it to gain a live presence. Film company and master licensor Tohokushinsha promoted the movie in their booth at Tokyo Anime Fair, sweetening the presentation with lovely ladies in Star Force uniforms. 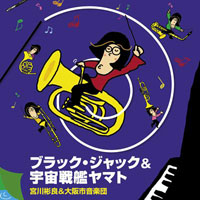 Akira Miyagawa, the son of composer Hiroshi Miyagawa, added another entry to the world of Yamato music with a CD of live performances. He conducted the Osaka Symphony Orchestra through a suite of Yamato themes and combined them with other works on an album titled Black Jack & Space Battleship Yamato. It was released by King Records. (KICC728).

Yamato Party is a one-day all-Yamato event run by fans for fans, dating all the way back to 1984. After a five-year break, they roared back to life with Yamato Party 2009 and the roving reporters of starblazers.com were there to see it in person. Among other delights, it featured the world premiere of footage from the forthcoming Yamato Resurrection feature film. Read a complete report of the event here. 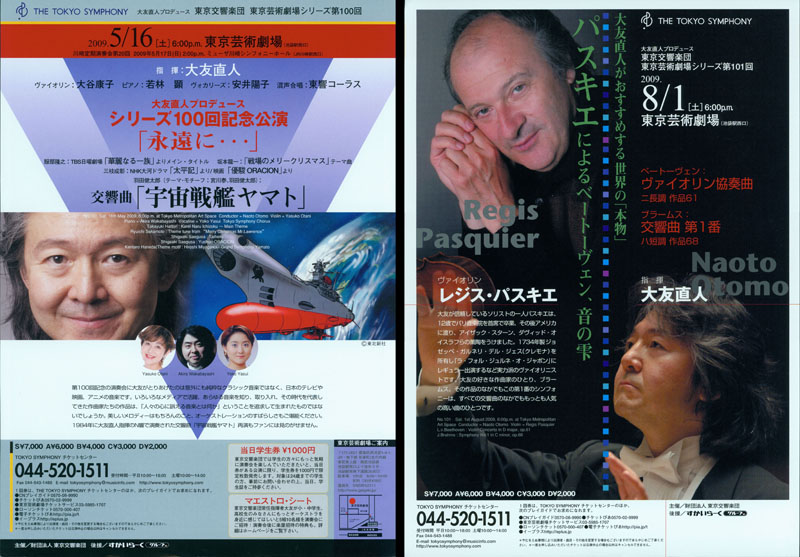 Yamato music was heard live again in a special concert at the Tokyo Metropolitan Art Space. Conductor Naoto Otomo was a key member of the music staff during the production years, leading Symphony Orchestra Yamato through all the sessions for Final Yamato and the 1984 Grand Symphony. 25 years later, he lead the Tokyo Symphony Orchestra through a new performance of that same concert. His next project would be to conduct the score of Yamato Resurrection.

As a nod to Space Battleship Yamato‘s 35th anniversary, Bandai reissued a large portion of their famous model kit line from the production years. For the first time since 1978, this included the rare multi-ship “Space Panorama” kits shown here. 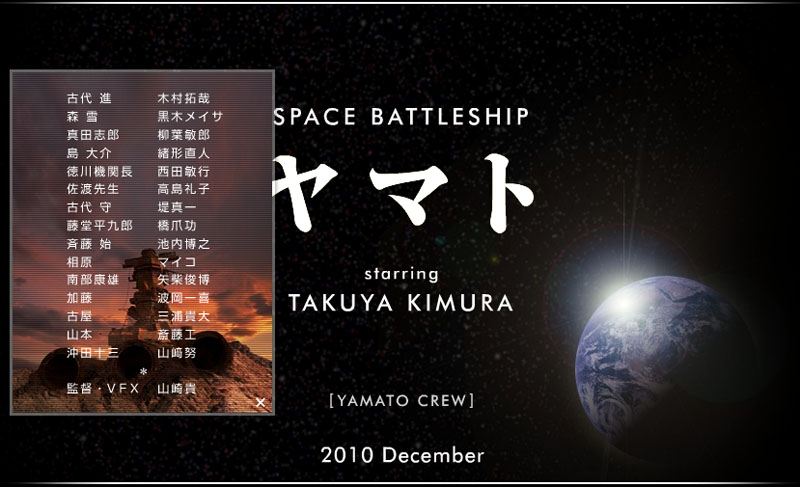 Fans were already buzzing about the upcoming Yamato Resurrection feature film when Series 1 & 2 alumnus Noboru Ishiguro first broke the news of another exciting project at Otakon in Baltimore, Maryland: a live-action Yamato movie was scheduled to go into production in the fall. The official website went live shortly after the announcement, but all it had to offer was a cast list as shown above. This was the case until the promotional campaign officially got underway January 1, 2010. (See details at the end of this report.) 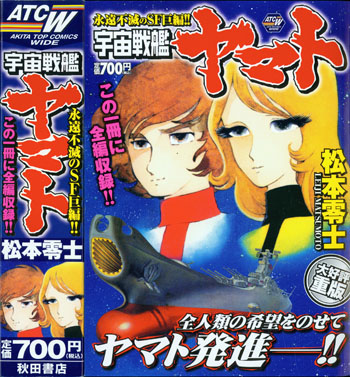 Another July event was a comparatively minor one; toy manufacturer Megahouse gathered some of its existing spaceship miniatures into a new set called the “Cosmofleet Best Selection II.”

Always a classic, Leiji Matsumoto’s manga for Series 1 and Farewell to Yamato was reissued in a thick, single-volume paperback collection (shown at right). This was the 65th edition in 35 years, meaning that for all intents and purposes it has never gone out of print.

By this time the promotional campaign for Yamato Resurrection had begun to ramp up in Japan. The first live event was a gallery collection called the “Perfect Revival Exhibition.” It featured cels, original art, and vintage products from the archives along with production art from the new movie and a giant 15-foot model of the ship. The event was attended by a Japanese blogger who kindly allowed us to translate his report. See it here. 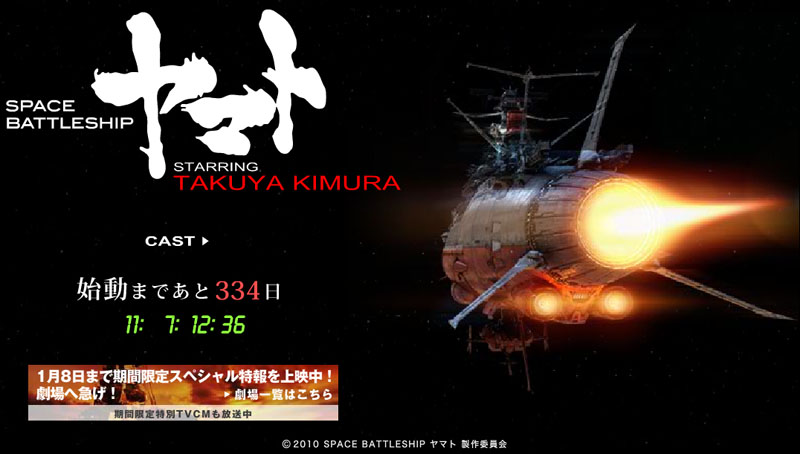 The live-action Space Battleship Yamato movie went into production at Toei Studio in Japan. Principal photography was completed in only a month, giving way to a long period of post-production. The film is scheduled to open in Japan on December 1, 2010. The image above appeared on an update of the official website on January 1. Additional details can be found at the end of this report. 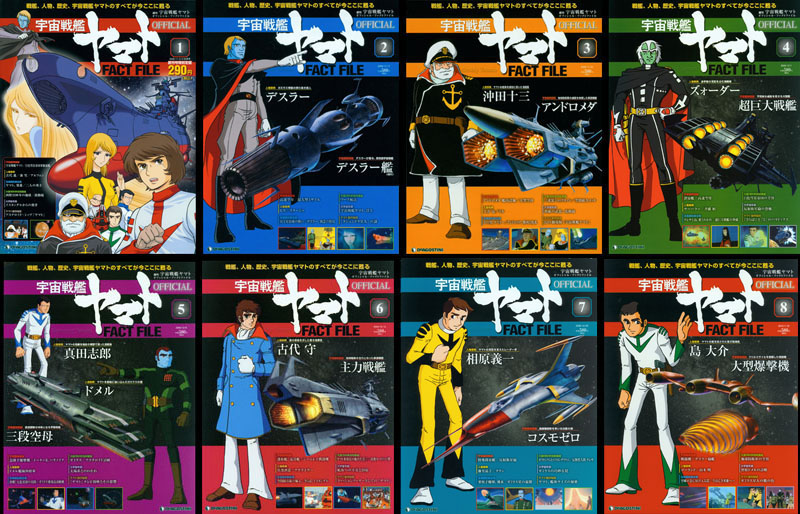 The first Yamato periodical since the official fan club magazine made its debut. Weekly Space Battleship Yamato Fact File was a serialized magazine published by the De Agostini company. Their Japan bureau is well-known for similar magazines dedicated to Mobile Suit Gundam, Star Trek, Toho monster movies, and many other titles.

Each weekly issue of Fact File contained pullout pages formatted to be placed in custom binders as a substantial Yamato encyclopedia totaling over 2600 pages. Read a detailed overview of the magazine here.