We flash back to Final Yamato to see original footage of the ship’s fate.

I’d re-watched Final Yamato on the small screen a week earlier, but now I was seeing it as originally intended. At that moment I felt connected to the Japanese side of the phenomenon as never before. It made me think I would have evaluated the film differently if that’s how I’d first experienced it. It vividly demonstrated to me how much we’ve been missing all these years. It’s quite a different experience when the pictures are bigger than you are and you can feel the sound vibrate through your body.

We return to 2220 as Jirou Shima flies Kodai to the Aquarius dock in a small shuttle. There, back in one piece, is Yamato. The first time Kodai sees it invokes the classic moment in Farewell with him staring up at the huge ship in drydock, waiting to be re-awakened. He enters the bridge alone to an instrumental of ‘Scarlet Scarf.’ The sculpture of Captain Okita is in its old position. We won’t be seeing it again since Kodai will ride the chair up and down more than once, and banging into the father figure would be bad form.

The bridge has been remodeled, but the basic layout is still the same. Kodai takes the captain’s chair for the first time and makes a solemn vow:

“Yuki, I do not believe you are dead. Wherever you are, even in the depths of Hell, I will come for you. Wait for me. First, I have to save the human race.”

He begins his inspection in the engine room where he is charged by a brash young man wielding a pipe wrench. He accuses Kodai of being a spy and takes a swing at him. “That idiot,” says an older man and runs to break it up. The older man is Tasuke Tokugawa, whom we know as Patrick Orion Jr. (He’s lost the pudge and kept the hair, unlike how I drew him in Star Blazers Rebirth.) Kodai is very pleased to see him, and the young loudmouth is introduced as pilot/navigator Jun Kobayashi. We also meet the wonder twins, So and Sho Tenma. They’re immensely proud of the new engine, which they can practically run themselves from a nearby control room. 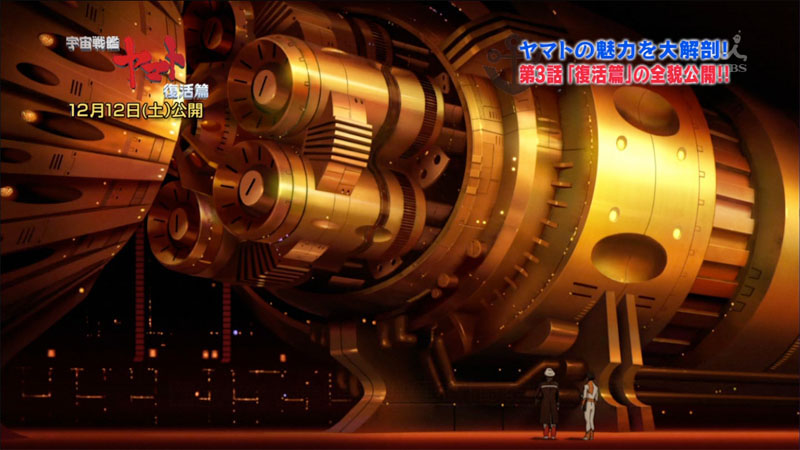 Tokugawa shows off a giant six-cylinder revolver he calls the Transition Wave-Motion Gun. One look is all it takes to know that it’s gonna deal out some serious hurt. The music for all this is the ‘Remember Yamato‘ song from The New Voyage. They couldn’t have picked a better tune.

We head down to a new area of the ship, the navigation center. It fills the third bridge, which is now blue because of its enhanced role; it needs the same protective coating as the upper hull. A giddy Sakurai is there and we meet the lovely Maho Orihara, the super-brain in charge of the Super Brain. (No, it’s not really called that.)

The crew gathers on the first bridge. Kamijou has been assigned to the combat station and tests out the wave-motion gun mechanism. In addition to flying a Cosmo Pulsar, Kobayashi will also fly Yamato itself. Sparks fly the second these two hot-heads meet. Omura, now the Executive Officer, breaks up their fight as Kodai takes the captain’s station.

The third Emigration Fleet lifts off from Earth as the EDF forces rise from the moon. As before, it’s an even mix of battleships and Super Andromedas.

On Yamato‘s main bridge, Maho’s station is activated and she descends in a private drop-chute to the third bridge. It’s entirely staffed by women (in Yuki’s old uniform) and is basically a giant orb that displays holographic data. 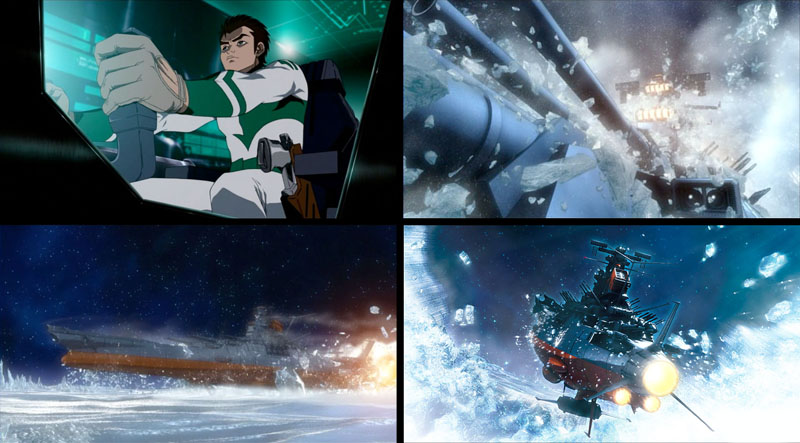 Kodai gives the words we’ve been waiting to hear for 26 years, “Yamato, Hasshin!” The new rock version of the theme (by THE ALFEE) boils up and we’re off to outer space with a massive plume of Aquarius ice in our wake. Sanada watches the launch from Earth HQ and smiles. Now things are going to change. 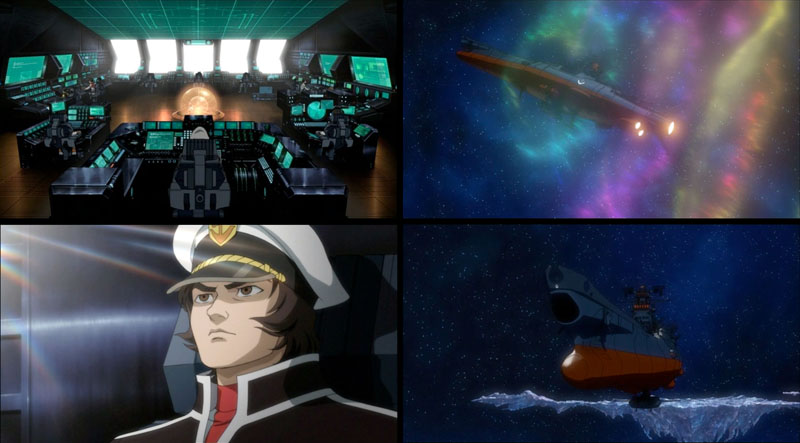 Cut to the Cascade Black Hole, still on its way. Less than 90 days out.

We’re in Yamato‘s briefing room (the one with the big light-up disco floor) where Sakurai lays out the mission. Arrows indicate the path of the fleet and the path of the incoming black hole. It’s coming out of the center of the galaxy and we’re heading to another part, 27,000 light years to Amare. The point at which the first two fleets were ambushed lies directly in their path. Everyone heads out but Kodai stops the ship’s doctor, Miharu Sasaki. He asks her why she wears goggles. She explains that she’s really just here to pilot a fighter. (Though she doesn’t do so with goggles on, for some reason.)

The Emigration Fleet warps away and we shift to the other side of the conflict. In a giant space fortress we see a gathering of the Great Urup Interstellar Alliance. There are ten chairs around a table, all occupied by humans or near-humans. Five of these nations take part in the movie: Amare, Ethos, Fridei, Beldel and the top dog: SUS. Governer-General Metsler is its representative, an imposing 10-foot figure dressed like he just walked off the set of Cirque du Soleil. He presents footage from the first battle of the movie, carefully edited to make Earth look like the aggressor, beating the daylights out of the red ships (which, incidentally, belonged entirely to SUS. That should serve as a clue). Earthlings are a threat to be eliminated on sight.

The order is relayed to Admiral Gorui of the Ethos fleet: intercept and destroy the outward-bound Earth fleet. Gorui complies, but seems a wee bit skeptical.

Back to Yamato. They’re approaching the ambush point. Maho launches probes to set up a search net to watch for invaders. The area is vast, and strategy to get around it is discussed. Maho suggests using BH-199, a gigantic black hole. The entire fleet could slingshot around the event horizon of BH199 to boost the enormous emigration ships into a fast warp that will take them to Amare much faster than they could manage on their own. Naturally, this plan is frought with danger; a huge debris field surrounds the black hole and could smash them to pieces. We hear the arguments for and against, but Kodai has the final word and it is ‘go.’

The fleet approaches BH199 and we get soundtrack music from Final Yamato. I have to pause for a moment here and say I like that score, but it doesn’t have the memorable hooks of the earlier soundtracks so sometimes it’s a challenge to remember what tracks go with what scenes. Here it’s different. The piece is so well-matched to the action that I’ve already come to associate it more strongly with this scene. You’ll know what I mean when you see it for yourself.

I don’t know if what follows is scientifically plausible, but it’s certainly the most white-knuckle ride we’ve seen in the saga. Naturally, the bad guys aren’t about to let the good guys off easy. Admiral Gorui watches the first wave of emigration ships successfully ride out the storm and warp away, then issues the order to charge.

Kodai sees them coming and calls for battle stations. We zip down to the hangar deck, which is a lot roomier than it used to be. (The entire body of the ship is wider now to accommodate a bigger interior. This actually makes it a closer match to the IJN Battleship Yamato.) The Cosmo Pulsars are being readied and they already look like they’re moving at mach speed just standing on the pad.

Kodai takes the helm so that Kobayashi can head down to his fighter, which he does–right after stopping to flirt with Maho. A moment later he’s suiting up along with Miharu and flirting (unsuccessfully) with her. She is smoking hot in an old-school Black Tiger uniform. Fans have been dreaming of female BT pilots for years (one also turned up in the Playstation 2 games) but now we’ve got one for real and she has zero tolerance for smart alecs like Kobayashi. (By this time I’m a liquid human in my seat, barely holding together against the awesomeness. I almost miss the words “Beware of Thurst” on the fighters’ flanks.)

The soundtrack spools up a new rendition of the Cosmo Tiger theme from The New Voyage and those gorgeous planes are out the door. The same three fleets we saw earlier are waiting for them. Gorui’s ships are blue. The Beldel ships (and people) are green, and the Fridei ships are red. This armada does not include the SUS ships who attacked fleet no. 1. But they’ll be back. 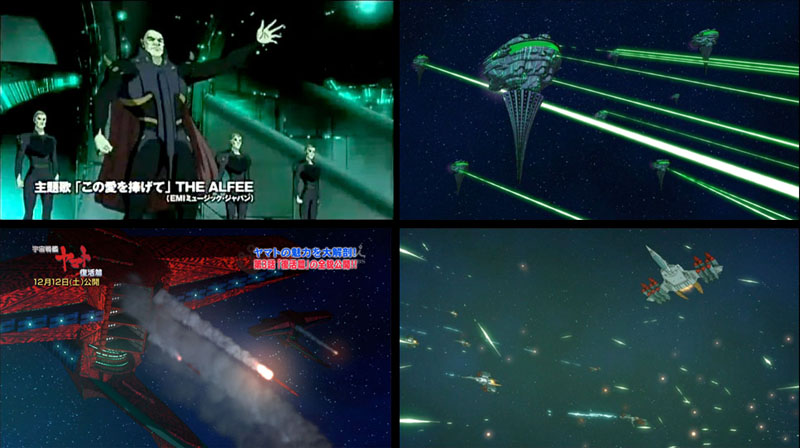 Yamato is the first to open fire and things get crazy real fast. I’m talking crazy on the level of Return of the Jedi‘s space battle, but since it’s all CG we get a lot more of it. Vertigo sufferers, hold onto your seats. The enemy throws everything it has at the Earth fleet and gets as much in return. Yamato unleashes its newest weapon, barrier missiles which create a huge energy shield that can stop absolutely anything. There’s also a bomber version of the Cosmo Pulsar with two enormous torpedoes. Through all this, the second wave of emigration ships is lumbering by in the background, doing its best not to be knocked off course and into the roiling maw of BH199. 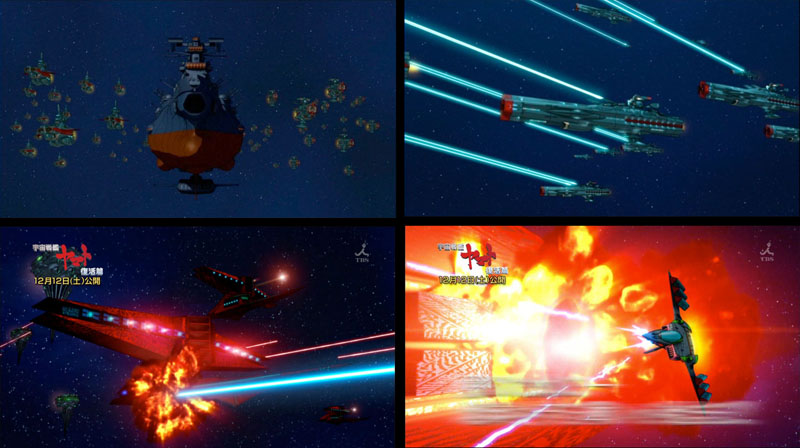 Gorui watches everything with interest, and his attention is riveted by Yamato. “That one ship,” he observes, “is raising the combat effectiveness of their entire fleet!” From a distance, Gorui is himself being watched by Barlsman, commander in chief of the SUS. Barlsman knows Gorui’s holding back. That guy has always been trouble.

On the bridge, Kamijou loses his patience announces his intention to use the Wave-Motion Gun. Kodai slaps him down; it will draw too much of their energy away from other things, like the ability to warp away.

Gorui realizes that the Earth ships, especially that really awesome-looking one, haven’t engaged in the wholesale slaughter Metsler described in the earlier meeting. Maybe they’re not as murderous as advertised. When Yamato deliberately places herself in harm’s way and launches barrier missiles to protect an emigration ship, Gorui is convinced. This is not the behavior of killers.

He orders a cease fire and we hear the first classical music in the soundtrack; it’s as austere as this man, who also happens to have Dessler’s voice actor behind him. If that doesn’t telegraph it enough for you, turn in your crew badge.

The Cosmo Pulsars head back to the hangar as Gorui opens communications with Kodai. He explains that they were mislead by their masters in the SUS (the first time Kodai has heard of them). On Gorui’s planet, they follow a bushido [a knight’s ethical code] and it is obvious to him that Yamato fights with honor. Seeing Yamato in action has made him realize that he abandoned his bushido to do the bidding of the SUS. The Earth ships will now be allowed to go in peace. Kodai thanks Gorui and emigration fleet #3 gets the heck outta Dodge.

Barlsman contacts Gorui and gives him the business. Gorui confidently replies that his bushido forbids him to attack innocent people. Barlsman reminds Gorui that the SUS could quite easily wipe out his entire nation and signs off with a sneer. Gorui smirks, now understanding the truth. That threat could not have been a more obvious coverup.