Production notes: The decision to cut the series down to 26 episodes (because of low ratings) had been made in the month of November, 1974. In the original 39-episode scenario, episode 21 would have begun a six-episode arc in which one of Yamato‘s instruments malfunctions and detours the ship into the Small Magellanic Cloud. It turns out to be more lightly-defended by Gamilas than the Large Magellanic Cloud, and is therefore an easier penetration point into Gamilas territory. Of course, this subplot had to be abandoned, so now episodes 21-26 represent a severe contraction of story material.

This is the one and only episode produced by Sunrise Studio, who temporarily took over all production duties so that Academy could get an early start on the far more demanding episode 22 (the battle against Lysis’ fleet). They may have started small, but by 1980 Sunrise Studio had renamed itself Nippon Sunrise and become a major creative force in the anime industry. Today they are simply known as Sunrise.

A month has passed since the destruction of the Gamilon base on Planet Balan.

On Planet Gamilon, Lysis stands before a military court overseen by General Krypt, defending the strategy that lead to this unprecedented defeat. Lysis, not unreasonably, blames the loss of the base on Volgar. Lysis insists that “his operations never fail” and that if his Balan operation had been allowed to continue, the Star Force would have been destroyed before their base could be harmed. Talan, in his second and last speaking appearance in Series 1, accuses Lysis of blaming his failures on others.

Story note: look carefully and you’ll notice a pair of Gamilon women in the gallery watching over the trial, though they don’t appear to be serving on the jury. One of the women looks like a ninja and the other wears a Burka. They could be members of an all-female Assassin Unit conceived by Leiji Matsumoto in the later stages of series development.

Apparently, the Balan Base was extremely important to the Gamilon invasion of the Milky Way, because Talan says “without it, our control of the galaxy will be greatly limited!” The tide is clearly against Lysis, and calls for the death penalty come down from the arena. Krypt announces his judgement: Lysis is to be stripped of his past honors and held in his quarters until the day of his execution. However, when Krypt brings the paperwork to Desslok to sign (delivered by an odd biotech table), the Leader crumples them up.

Story note: Dessler’s handmaidens previously appeared in episodes 4 and 7 when Gamilons were still caucasian; here their costume and skin colors have changed.

Krypt informs Lysis that he’s been pardoned by Desslok, and will be given command of a new fleet with which he is to destroy the Argo before it reaches the Large Magellanic Cloud.

On the Argo, Sandor’s science group is busy in the lab, analyzing data from the wreckage of the Balan base. Sandor tells Wildstar that the Gamilons have been monitoring Earth, possibly with the intent of moving there. While Space Battleship Yamato has told us several times that the Gamilas are planning to invade Earth, this is the first time it’s mentioned in Star Blazers. Since Balan was an important base to them, there may be some kind of reprisal coming.

Lysis, now reunited (strangely enough) with Volgar, plans to issue a challenge to the Star Force. Their battlefield will be the “Rainbow Galaxy,” and Lysis unveils several new weapons for the occasion. First is the Space Matter Instant Transporting Equipment, or SMITE, which is essentially a pair of warp projectors that can teleport squadrons to remote locations. As for the Wave-Motion Gun, Lysis has prepared a drill missile which is meant to be launched directly into the firing gate, where it will work its way into the middle of the ship and explode. 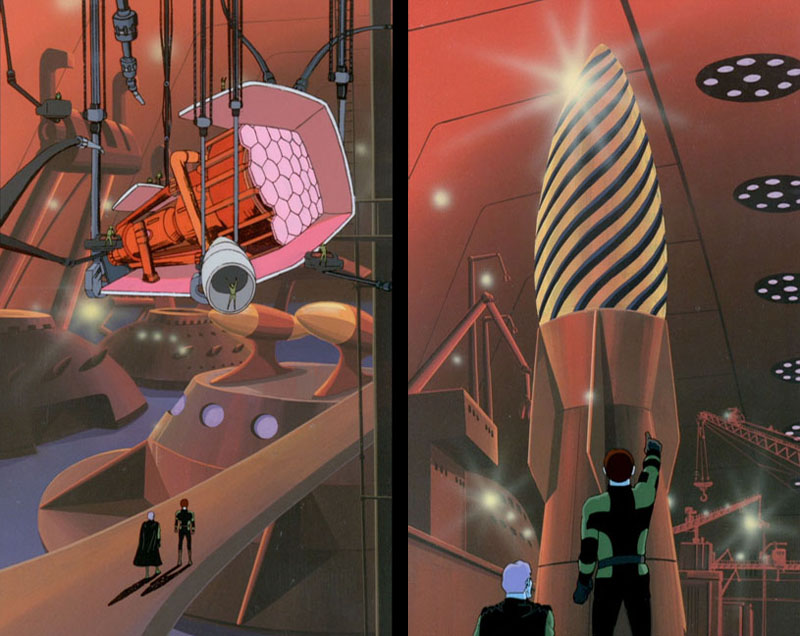 In Space Battleship Yamato, Domel [Lysis] rejected two other battlefields before settling on the Rainbow Galaxy. The rejected areas were the Galmarious Trinary (radiation storm is too intense) and the gravitational system of the Pozi planets (no hiding place for the fleet).

The Star Force receives Lysis’ message. They are apparently familiar with the Gamilon language, because Homer’s communications computer is able to translate it. After hearing Lysis’ challenge, Wildstar is enthusiastic about having an opportunity to face the enemy in battle. Both Sandor and Venture urge more caution and to keep focused on the mission to Iscandar. They defer to Avatar, who declares that they will accept the challenge.

Three Tri-deck Carriers and a Battle Carrier arrive on Gamilon. Space Battleship Yamato identifies the four carriers and their captains with labels. The fact that these Captains and their capital ships could be pulled in from other campaigns makes you wonder just how vast the Gamilon Empire is. What other military activities are they involved with? Since the goal for Gamilon was to relocate to Earth, why weren’t their other enemies’ planets picked for “New Gamilon”? Perhaps the might of the other planets’ militaries makes them more difficult to pacify, or Earth’s location is simply more desirable.

The four Captains are: Scarp [Getto] from Alpha, Rancor [Barger] from Diamond, Zadic [Kroitz] from Eliasite, and Borka [Hiderun] from Omega. Lysis tells his subordinates that this battle will “determine if Gamilon is to continue to rule the galaxy”.

The Argo‘s crew is going over every inch of the ship to ensure that it’s battle ready. In the hangar, Conroy tells his crew to take extra care with Wildstar’s Superstar fighter, as it will be leading the Black Tigers. This is the first time we hear Wildstar’s fighter called a “Superstar” and this episode and the next are the only times the name is used. The original Japanese name is Cosmo Zero, which evokes the Japanese Zero fighterplane.

Deleted scene: IQ-9 goes to Dr. Sane, feeling useless. Dr. Sane, already intoxicated, suggests that IQ has a drink. The robot throws a cupful of sake on himself, which (as in Episode 11) makes him instantly drunk.

Wildstar and Venture go over what they know about the “Rainbow Galaxy.” A more accurate name would be the “Rainbow Star Cluster,” since this “galaxy” is a collection of stars, each composed of a different element and burning in a different color. There’s also a massive black cloud in the area. Wildstar surmises that their radar might not work well in that environment, and the black cloud further complicates things. This scene continued a bit more in Yamato, as a drunken, belligerent IQ-9 wheels in, announces that he will take care of the Gamilons single-handedly, then falls over.

Desslok briefly addresses the Rainbow Cluster forces before turning them over to Lysis. Privately, Volgar asks what will happen if the Star Force isn’t destroyed by the Drill Missile.

Lysis’ responds, “I do not go into battle with doubts and fears and I advise you to leave yours at home too.”

“You think I am afraid to fight?” Volgar asks.

“Have you forgotten what happened on planet Balan? Well, I haven’t!”

In Space Battleship Yamato, Domel foreshadows their fate by vowing that their loyalty to Dessler will be their final weapon.

Soon, the four carriers and Lysis’ flagship (equipped with SMITE projectors) depart for the battle area. As they leave, Space Battleship Yamato once again displays captions for all the carriers. I guess it’s an indication of his current standing, but Lysis’ new flagship is a giant step down from his previous one. It’s little more than a flying saucer with few armaments.

On the Argo, Captain Avatar wonders if Wildstar is up to his new assignment as Deputy Captain. In the Yamato version of this scene, Okita [Avatar] is wondering what kind of man Domel is.

Lysis outlines the plan of attack. The fleet will remain on the other side of the black cloud. When the Argo enters the cloud, their radar will not work. Lysis will send in his forces to physically disable the radar, then follow up with the drill missile attack. Volgar declares it “an excellent plan.” Lysis cautions him about under-estimating Captain Avatar.

On the eve of the battle, Captain Avatar addresses the entire Star Force. Before he takes the stage, there are discussions among the crew about whether accepting this challenge is the right course of action. However, the chatter seems heavily in favor of the battle, even from Venture, who has historically shied away from head-on confrontations with the Gamilons (though in Yamato, Shima [Venture] still expresses caution). When the Captain makes his way to the stage, an anonymous crewman laments, “he doesn’t look very strong, does he?”

Avatar states that there would be no disgrace in avoiding this battle “since our goal is to bring peace to Earth, not war to the Universe, but our enemy has other plans.” In wishing his crew well, he leads them in a toast. The toast is, naturally, with spring water. Unlike most instances of “spring water” in Star Blazers, this actually is water! I like the symbolic nature of the toast, that instead of drinking something that’s been prepared by the hand of man, they are drinking something pure and natural from the Earth itself.

Story note: in most countries other than Japan, it’s typically considered bad luck to toast with water. One could wonder if this voyage would have been accident-free had the Star Force just stuck with the booze.

Time passes, and the Argo arrives at the battle area. Nova reports that the radar is not functioning. Avatar orders the crew to prepare for battle. Ah, the calm before the storm. This is one of those rare episodes where the explosion count was zero. However, they are about to make up for it in spades.