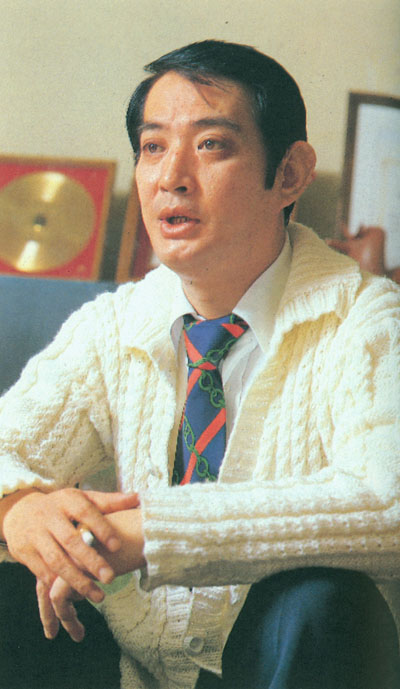 Yoshinobu Nishizaki set the bar high for anime producers during the Space Battleship Yamato production years. Prior to this era, the names of those working at his level were primarily known only via their onscreen credits if, indeed, their young audiences even paid attention to them. Nishizaki, by contrast, was a whole new breed: an active and outspoken booster of his craft who penned so many essays, gave so many interviews, and made so many personal appearances that he became almost as recognized as his work.

The following essay was written after the release of the first Yamato movie in 1977, when the nation of Japan was in the grip of Yamato fever. It was published the following June in Office Academy’s magnificent three-volume hardcover retrospective of the TV series and discusses the earliest phases of pre-production. Though he can never be accused of excessive humility, Nishizaki’s voluminous words provide an invaluable personal record of this remarkable period in anime history.

I am pleased that I had the chance to visualize the dream I held in my mind from the time of my childhood, and as a producer my thoughts and beliefs became part of this work.

An Idea in itself is not Proprietary!

“Where did the idea of a huge battleship flying in space come from?”

How many times have I been asked such a question since I sent this work out into the world? Though it makes me feel a little perplexed, in every case I answer, “it’s from my childhood.”

In fact, I have liked mecha-type things and SF/adventure novels since I was a child and am confident that I’m well-versed in that area. I was strongly influenced by the work of Yoichiro Minami and Juzo Unno, among others.

Anyway, I had many daydreams when I read the stories of that time. Transparent airplanes, a warship that flies in the sky…they floated from the world of the printed word into the imaginations of many boys, including me. Those words stirred personal images in my head. Certainly, their power caused many dreams to swell in the imagination. As a result, my ideas for mecha and such are a reflection of those authors’ words, prototypes that became subconsciously modified somewhere along the line. If anything, I became good at letting my imagination swell.

In that sense, the idea of a huge battleship flying in the sky is not the property of one person. Perhaps everyone had it when they were young. But only in a few cases could that image be made into a real picture. I kept that idea concealed in my heart…even as I grew to an adult, I carefully nurtured it. The idea of visualizing it as something real was also a dream I had fostered since my childhood.

Turning an Idea into Reality…

Recently, the trend of society has been toward management, and modern people feel like they have lost the dreams they previously held onto. As we age, we lose touch with the place where our dreams reside. We concern ourselves with the situation around us and forget to rise above it. There is a dream beyond the boundaries of Earth, hidden in the infinite potential of space to inspire the imagination of those who look up. I have thought about this for a long time, wondering if a grand story could be developed from this theme.

I can say that my time making Wansa-Kun was a process of trial and error. I had many romantic dreams of producing a musical anime. I combined sound and story in this work, and became determined to pursue that on a bigger scale. To find that scale, outer space was the only place to go.

That setting came into my head immediately. What method should I use to develop and express a grand story there? The answer came naturally; either with special effects or anime, since I’ve been devoted to SF films and stories since I was a child. However, I had to wonder if the working world would be impressed by a novel being turned into a movie. No matter how wonderful the special effects, there are limits. With anime, there are no limits in that respect. I decided on anime from the beginning as a method that could fully express the image I preserved from my childhood.

I digress, but I think it was valuable for me to have pulled the realization of a flying battleship in that direction. The starting point of this idea was an image, and anime is best at presenting an image without restrictions. Compared with the printed word, anime can amplify an image as long as there is a good match of story and music. And with the magnificent backdrop of space, these components all combined to become Space Battleship Yamato.

I hope that you understand now why I feel perplexed when I am asked where this idea came from.

Anyway, I can say that the greatest hardship was the development period when I moved the concept of Yamato into a plan for TV anime production. Incidentally, it took many months for the plan book to materialize from the initial proposal.

The first conversation was about “a ship that flies in the sky.” What kind of ship would make a good spaceship? A sailing vessel, or even better, a huge battleship!

I spent several months with this in my head. With that as a starting point, it was Aritsune Toyota who participated with me to determine where the idea would go next. Several months were required for this work. Additionally, it was derailed because most anime is for children. I felt that we could only take the idea about halfway. If a producer’s story ideas are not thorough, and appear to be no more than a whim, of course the audience will not be interested.

A Lucky Encounter with Leiji Matsumoto

The point is, the idea of Space Battleship Yamato had been lying around for a long time in the world-building stage.

A lot of time was spent choosing a theme, asking, “how do we express it?” and building it up. It is necessary to say that laying a foundation is the proper demonstration of a producer’s special skill. To put it simply, my own attitude was sufficient to build a strong theme.

As the image solidified, the selection of a staff began, and I requested the participation of Leiji Matsumoto as the supervisor of art and design. What singled him out for me was my recollection of his [manga] work, Sexaroid. In that story, the mecha was portrayed very well in combination with humans. Usually in SF, stories of man and machine tend to end in revolt, but Matsumoto found a beautiful match between oil and water. With Sexaroid I became his fan completely, and the feminine image he drew in it became my ideal. In that way, Sexaroid entered the world of Yamato and helped to complete my thoughts about it. 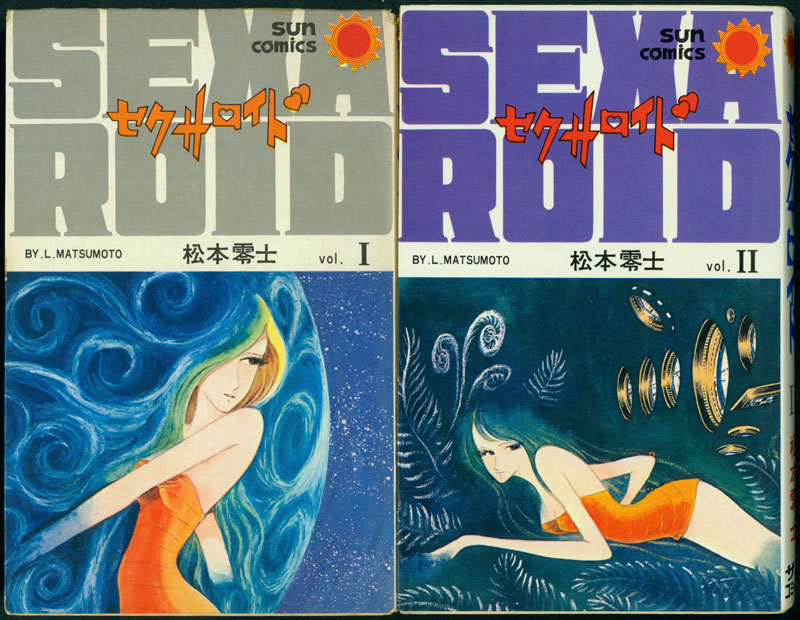 I admired his passion for anime, so the day after I met him I strongly requested his cooperation again as the supervisor of art design. I said, “are you not already depicting the state of man as fully alive without limitations?” I understood his intention when he vowed to give this project his total commitment.

I also spent considerable time thinking about the fusion of music and story, and I asked [composer] Hiroshi Miyagawa to work with plot-maker Eiichi Yamamoto to intensify it and emphasize the basic theme.

With the participation of such strong minds, I made a production schedule and a plan book, and at last began the process of selling to the advertising agency and TV stations. This stage was the most difficult.

My studio, Office Academy, was not well-known yet because we hadn’t made many deals. Still, I enthusiastically made it my condition that I didn’t want Yamato produced anywhere else. If that were the case, the work would not be able to unfold freely. But because the details of this process are irrelevant to the main topic, I will omit them.

Yamato is a Pioneer of the SF Boom!

Why is Space Battleship Yamato a big hit?

I started by describing my boyhood experience, that a child instinctively needs to entrust himself to a dream. That was probably there in Yamato. These days, the regimentation of society penetrates childhood and forces itself even into the lower grades of elementary school. It seems even children have entered the age when people begin to lose their dreams. Surely, such children would become desperate for a world of romance and adventure. They would have doubts, and wonder if it is possible to break through this invisible, restrictive wall of oppression.

Space Battleship Yamato is there for them. And they can feel strengthened by seeing the characters reflected inside themselves, just as the work of Juzo Unno once made my heart swell. If they assume that they cannot be their true selves in the present world of social reality, Yamato is there.

Moreover, with showings on both TV and movie screens that ignited an SF boom, this work elevated women, who were previously relegated to the sowing of seeds. Why were the strong female characters so well-received? To be precise, even though this is a work of SF, on a secret level it is not.

Academically speaking, the first feature of traditional SF is an odd mecha-mania. If anything, it dominates too much of the surface, and there is little interest in the fun of the story. In other words, most novels and stories can’t be drawn by human hands. You begin with a human being, and only when you reinforce him with a scientific element does it become an SF work of high purity. I always believed this to be so. However, there are a lot of SF works that lack a human perspective. It was my intention to provide a complete portrait of human beings in Yamato. 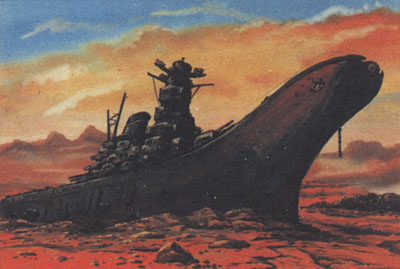 This means a series of problems comes up in the story.

“What would you do in a situation like this?”

…was the first. It was necessary not to forget the moral sense of human beings.

Additionally, though it is off the main subject, the Battleship Yamato has been reinterpreted through SF.

“Could Yamato sink in space?”

…was a strange question. There is no right or left in space at all, but I knew if we stuck to the restrictions of scientific knowledge, it would become less interesting and it not be as much fun. Outer space is our setting, but surely I regarded it as the “one ocean” from the start.

A “flying boat” is itself a contradiction in the eyes of the SF world. It may be misleading of me to say this, but I am full of contradictions simply because I pushed aside the “SF mania” outlook and let the story expand freely in opposition.

There was a Spirit of Challenge in Yamato…

Though we say the theme of this work is “love,” it really comes down to “challenge.” There is a nuance that attaches great importance to the process of devoting one’s entire body to a challenge.

There is an idea I respect which values process over the results. Looking back, there were many actions taken by Yamato while it traveled from Earth to Iscandar. We respected the value of the process by building up numerous story points during the plotting stage.

In fact, that describes the origin of Yamato.

It is also similar to the theme of love, that humans should try to love rather than fight.

I will confess something here; 26 episodes were not sufficient to fully explore that theme. I want to express it more clearly in Part 2, which is now in progress. It is called Farewell to Space Battleship Yamato, Soldiers of Love.