After the sequel was announced at the Yamato success party in November 1977, the main production staff was quickly chosen. The co-producers would, of course, be Yoshinobu Nishizaki and Leiji Matsumoto. Toshio Masuda, who had supervised the editing of the Yamato movie, was named as a producer along with Toaru Yoshita from the headquarters of Toei Animation. Tomoharu Katsumata, also from Toei, was chosen as the animation director. Thus, the production system of the sequel would be much more efficient than that of Series 1.

Additionally, Aritsune Toyota, author of the Asteroid Ship concept that laid the groundwork for Yamato, was asked to participate again as a writer. Joining him would be Yamato‘s lead scriptwriter, Keisuke Fujikawa, veteran writer Fumio Kounami from Toei, Yutaka Kohira. Also on hand for the first time was Hideaki Yamamoto, who would become a permanent member of the Yamato writing staff from then on. Throughout the month of December, they were encouraged to roam in whatever direction their imaginations took them. Therefore, their ideas differed significantly from the finished film.

Toyota took the lead in this process and became the first to crack the story, basing his concept directly on Nishizaki’s proposal. These ideas were not used in Farewell, but longtime fans will recognize where they eventually came up again.

After its return to Earth, Space Battleship Yamato is placed on exhibit in the large open plaza of Cosmopolis. People have risen from the ruins and now fill the air with the hammering sounds of rebuilding. No trees have yet begun to grow, but a flowerbed was made for the Yamato Monument. Everything progresses smoothly.

However, after accomplishing their heroic mission, the Yamato crewmen who saved the earth have begun to feel alienated in this time of peace.

“This is the mighty Wave-Motion Gun!”

In the eyes of the people, Yamato begins to look like a monster. This view has even begun to rise among the former crew. The hero from the times of chaos is becoming a nuisance with no purpose in this new world.

Kodai wants to shout that Yamato saved them all! But the crew remains quiet and lives anonymously among the rest of the population, though some indulge in liquor and cause violence.

In this time, a mysterious communication blackout occurs on Earth, influenced by huge sunspots. An astronomer observes a strange phenomenon on the sun; many sunspots apper on the surface and solar flares are increasing rapidly.

When Dessler of Gamilas fought his final battle with Yamato, he fired his nuclear beam and failed to destroy the ship. Now it is discovered that the energy of this beam was attracted to the sun’s gravity and fell into it.

The sun absorbed its energy. This was a terrible accident.

The energy of the sun comes from heavy hydrogen (Deuterium); when two of these atoms fuse together, the reaction produces helium. Therefore, burning helium accumulates inside the sun. This reaction has accelerated rapidly with the extra energy as a catalyst.

Normally, a fixed star has a long life of approximately 10 billion years, after which its accumulated helium causes it to expand into a red giant and finally explode into a supernova. After that, only black ashes remain. Once the sun’s life cycle is over, the closest star to Earth will be Proxima Centauri.

In the case of a fixed star with a mass of more than double that of our sun, it collapses into a black hole without becoming a red giant.

An accident has happened on the sun. The nuclear beam of Gamilas endures the 100,000 degree heat and is accelerating the sun’s life cycle toward the red giant stage. In just two years it will swell into the orbit of Mars and swallow that planet, let alone the Earth.

Other examples of swollen red giant stars are known to astronomers. The star Mira of the constellation Cetus has a diameter 600 times that of our sun. It is on the verge of death and will split like a balloon when it explodes as a supernova.

In two years, Earth will be swallowed by the expanding sun. There is no defense of any kind against this. The entire planet will reach a surface temperature of 6,000 degrees! 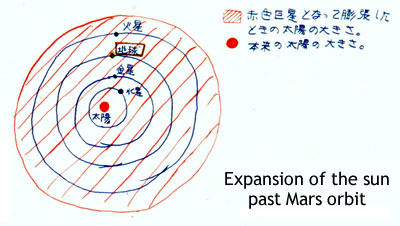 There is no stopping the sun’s expansion!

The current radius of the sun is 1 million km. When it becomes a red giant, it will expand to 200 million km. The human race must escape before that happens. The time limit is one year; at that time the sun will approach the orbit of Venus.

The human race must emigrate to another planet before the death of the sun.

Yamato, which accomplished warp travel exceeding 140,000 light years, can travel anywhere, but the process of transporting all of mankind to another world is limited to a short term. A colonization ship loaded to full capacity with immigrants cannot warp very well.

The Ragnarok system in the M67 star cluster of Cancer is 2,700 light-years from Earth. In this system, the fourth planet Odin has a spectrum which closely resembles the Earth, and Ragnarok itself is a G-type fixed star similar to our sun.

As the building of colonization ships begins, Yamato is given a new mission. With Yamato‘s warp ability, it can reach Planet Odin in no time.

The scientific capability of Odin is about the same as 20th century Earth. It is like a paradise, and its people welcome Yamato.

“Bring down a rain of missiles and annihilate the inhabitants. We will emigrate after that. If the people resist, kill them all. Use the Wave-Motion Gun if necessary.”

Kodai is speechless. This demand placed upon Yamato is far too much. The people of Earth are proposing to do to Odin with Gamilas did to them. The crew of Yamato is troubled by what Earthlings have become.

There is another inhabited world in the M67 star cluster, the Planet Yupangi of the Topak solar system. It is more scientifically advanced and has produced a civilization of robots. The planet is not endangered, but sees Odin as an opportunity for territorial expansion.

Yamato fights bravely against the fleet of Planet Yupangi despite their numerical superiority. They can fight and die for Planet Odin so that the people of Earth will be accepted here.

Yamato dies an honorable death. The Earthlings who are welcomed to Odin do not say a single word about it

Continue to the Making of Farewell to Yamato, Part 3: The Keisuke Fujikawa Draft