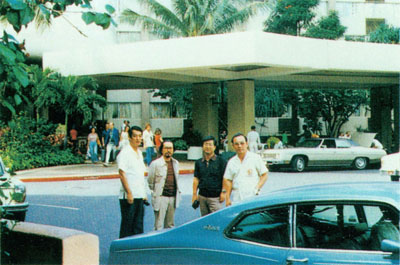 On January 7, 1978, Producer Yoshinobu Nishizaki and the members of his main staff (Leiji Matsumoto, Toshio Masuda, Noboru Ishiguro, Tomoharu Katsumata and others) traveled to Hawaii for a “writer’s retreat” to continue developing Farewell to Yamato.

The first purpose of this trip was to take in two new SF movies that had made a huge impact on the US the previous year: Star Wars and Close Encounters of the Third Kind.

Nishizaki’s impression of Star Wars was that it was merely an entertainment film without an appealing theme, and he was relieved that it did not cover the same territory as Yamato. However, seeing Close Encounters was quite a shock, since it explored the same “love of humanity and space” theme that Farewell to Yamato was going to tackle head-on.

After seeing it, Nishizaki couldn’t sleep for the next 24 hours, anxious about having to compete with it. But after further reflection, he realized that the involvement of aliens took it outside the realm of personal relationships between humans. Furthermore, he felt that the film’s music and mecha design fell far short of Yamato‘s.

“After all, only Yamato is Yamato,” he said afterward with renewed confidence.

The second purpose of the trip was to confine Leiji Matsumoto to a hotel room where he could work uninterrupted on designs for the movie. All went according to plan for the first two days, but everyone felt sorry for him and gave him his freedom on day three.

Matsumoto wanted to trace the course flown by the Japanese planes for the attack on Pearl Harbor, but the airplane he rented was a junker that didn’t even make it halfway down the runway. After two or three tries, it finally got off the ground and nearly clipped a slope as it glided toward the water. It settled into its course about 5 meters above the ocean, looking from a distance as if it was floating across the water with the waves rising dangerously close.

It was easy to laugh about it afterward.

The trip’s third purpose was to give thorough attention to Toshio Masuda’s story draft, which he had completed just before the trip. there was much to address and staff meetings began immediately.

New ideas and concepts were inspired by the Masuda draft and important progress was made. For example, the idea of a blue quasar evolved into the White Comet and Sanada’s role as the EDF development director rose to more prominence. It was also decided that Yamato‘s cosmo radar (nicknamed the “breast radar”) would be redesigned to have two “breasts.”

January 12: The Rubber Hits the Road

After the staff returned to Japan on January 11, story development entered its next phase: the scene-by-scene breakdown of battles and strategy for the action scenes. This was the work of Leiji Matsumoto, Tomoharu Katsumata, and Noboru Ishiguro in consultation with others on the main staff. While Series 1 was considered an extrapolation of World War II, battle scenes in the sequel would be designed on the basis of modern scientific strategies and combat methods.

The names of all the new characters would be decided upon at a March 18 staff meeting, but a considerable number of them were already in place at this stage. The new captain’s name had been Shiroto but was now established as Hijikata. The leader of the space cavalry was Tenma but now became Saito. (Star Blazers fans know them as Gideon and Knox.)

Those serving under Emperor Zordar were named Genitz, Miru, Goland, and Zabaibal. The idea for Dessler’s android soldiers also came into being here. One interesting name was Gatlantis, originally meant to be the captain of the Zordar’s giant Dreadnought. That character was eliminated from the story, and the name was given to the imperial city itself. 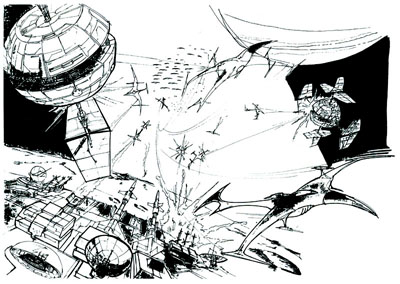 Unique and original ideas were hatched one after another, particularly for the battle between Yamato and Zabaibal. The battle between the EDF fleet and the Comet Empire fleet was built out of both contemporary and 21st century concepts, an “anticipation of the future” approach. Detailed notes set the direction for the animation, but since so much of it was difficult to express cinematically, it would be simplified in one way or another for the finished film.

One idea, in fact, would be developed for the film and then put aside: a battle at Planet 11. Nasca, commander of the Comet Empire’s 7th surveillance fleet, sends his UFO Vanguard unit to attack. The Earth base on the 11th Planet tries to fight them off with defense satellites and missiles, but is overwhelmed. Some personnel flee in escape capsules.

The loss of this sequence from the movie was no great tragedy, since it could easily be revived for the Yamato 2 TV Series. As everyone knows now, it became the basis for the episode in which Yamato rescues the Space Marines and takes them into the crew.

The material presented here represents the ideas in their undiluted form with illustrations that were done at the time to support the concepts.

[Translation note: ‘T2’ is the working name for Telezart.]

An area of space surrounding the Planet T2. (The intermediate point between T2 and a storm of space dust equivalent to a Sargasso Sea.)

This could be called the first battle, a preliminary skirmish for Yamato.

– After launching from Earth in response to the mysterious message from space, Yamato is in the vicinity of Pluto. They receive an SOS from another direction and suddenly change course.

– Arrival at the scene of destruction where an Earth patrol fleet was annihilated.

– Discovery of a small patrol boat drifting in the wreckage; the captain is rescued.

– Yamato receives the message from space again and changes course to follow it.

– Yamato comes out of warp right in the middle of a storm of space dust.

– Yamato rides out the storm and receives damage to every part of the ship.

– The source of the message is discovered as Planet T2.

– Suddenly, a carrier-based fighter group from the Goland fleet conducts a surprise attack from the direction of T2.

– Yamato launches the Black Tigers (or other fighters) and a dogfight begins. (Classic battle of single-pilot aircraft.)

– Goland’s front-line fleet is destroyed, an alert is sent to the Comet Empire 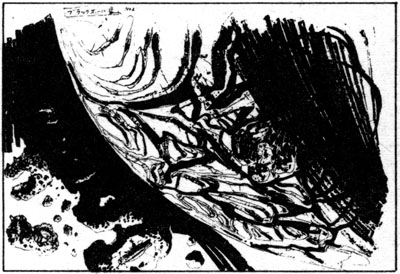 – The storm of space dust (consider its visual treatment)

– Damage caused to Yamato by the storm

– Design of new Black Tigers and their weapons 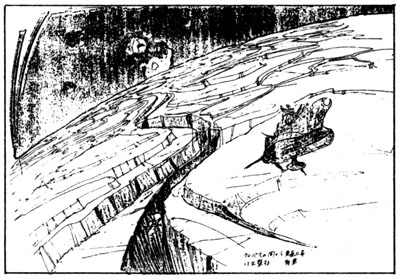 The sky and interior of Planet T2

– Crevasse in mountainous area, infiltrate base at its mouth

– Underground base beneath the crevasse 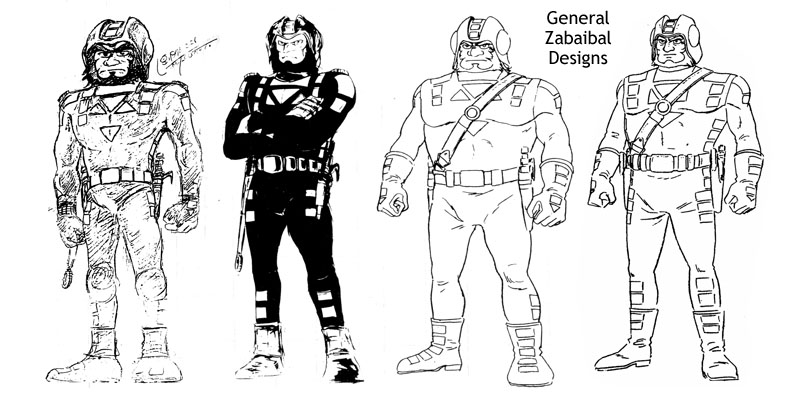 – Caught in a surveillance network of defense satellites and anti-aircraft missiles from the enemy base. (Automated)

3. cannon fires toward the goal point (enemy base)

4. Or, Yamato can attack indirectly by continuously firing the cannon elsewhere

5. Missiles fired by Yamato can be shot down by enemy lasers; their origin point can then be detected

6. The firing source is identified and destroyed

– Yamato cruises slowly over the crevasse, seen from below

– The message signal is strongly detected. It is here! 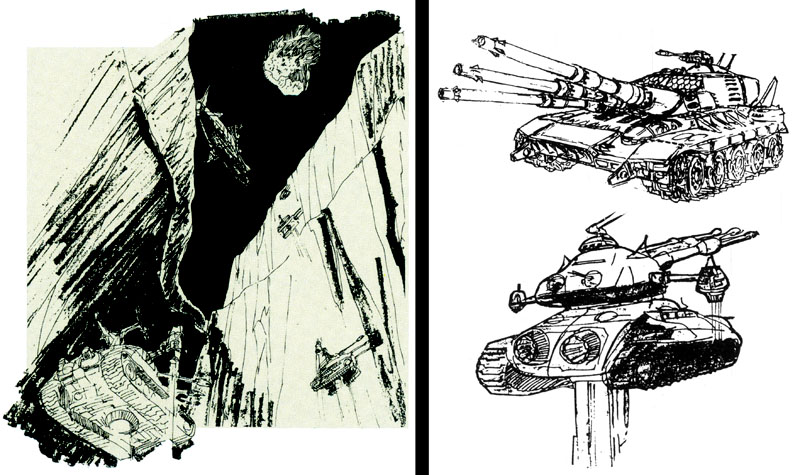 – Suddenly, the space tank corps attacks from the depths of the crevasse (under Zabaibal’s command)

– This is the underground stronghold of the enemy 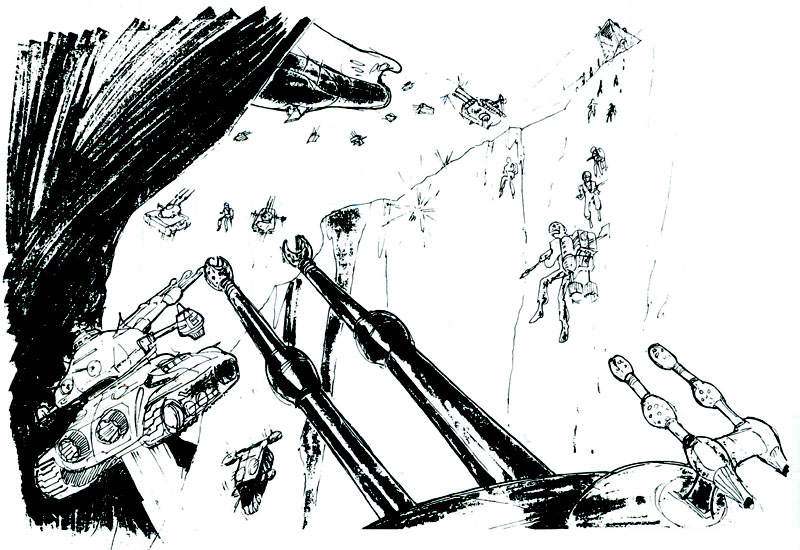 – Paratroopers are shot down

– Kodai and other crewmembers jump out

– Gunfire pours out from enemy fighters and tanks

– Heroic human vs. mecha struggle among the rocks (conducted by the landing forces). Similar to the trench battle in Star Wars with traps hidden in the walls.

– A brutal fight; Yamato crewmembers fall one by one as they follow Kodai into the depths.

– Kodai and Analyzer break through to the underground cave and stop.

– An underground lake (fantastic beauty), and the praying figure of Teresa surrounded by rocks

– Teresa is like a goddess caught inside a prison of rock on all sides (think about the mechanics of her imprisonment).

– Kodai stands in stunned silence, enemy starts shooting from the opposite bank

– Prison cell that can hold Teresa, an antimatter being 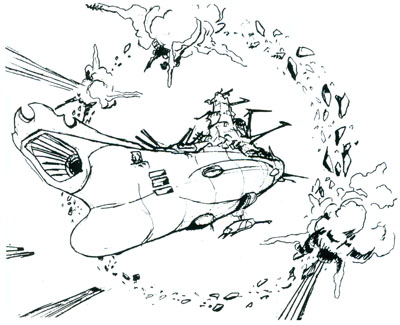 There were various plans for the battle against Dessler. At first, an asteroid field was chosen as the battleground. One concept was for the Gamilas side to attach mines to the rocks, then teleport them into Yamato‘s asteroid ring where they would be detonated. Yamato would later use the rocket anchor to capture and board Dessler’s ship. 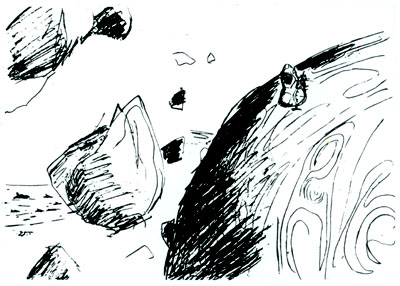 – Run into space rocks that resulted from damage caused by the White Comet’s passage (asteroids). They are slowly drifting in space.

– A group of rocks eerily moves toward Yamato

– BOOM! The rocks suddenly attack in a coordinated pattern!

– Yamato locks up as if caught in an ice floe

– CRUNCH! SNAP! The hull creaks, sounding like it is being pressured from the outside

– A ship approaches. The computer analyzes it.

– Sanada (or Analyzer) reads the results

– Kodai and the others are speechless

– Dessler appears on the video panel. “You thought I was dead, Kodai!”

– Yamato fires with the main guns, but the view is limited by the asteroids

– The enemy bombardment rains down on the ship. During the uproar, Yuki is injured and falls. 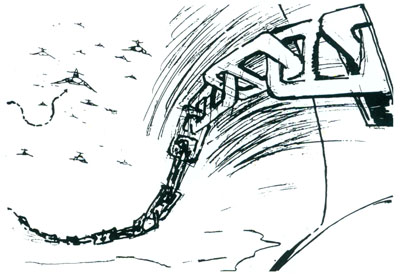 – The new captain orders the rocket anchor to be fired; a body blow!

– Dessler’s ship is drawn toward Yamato

– Dessler’s ship dives at full speed toward the asteroids

– The rocks separate and scatter, but it’s too late √ê Dessler’s ship collides with Yamato

– Both ships are damaged and neither can fire. The battle must continue hand to hand! 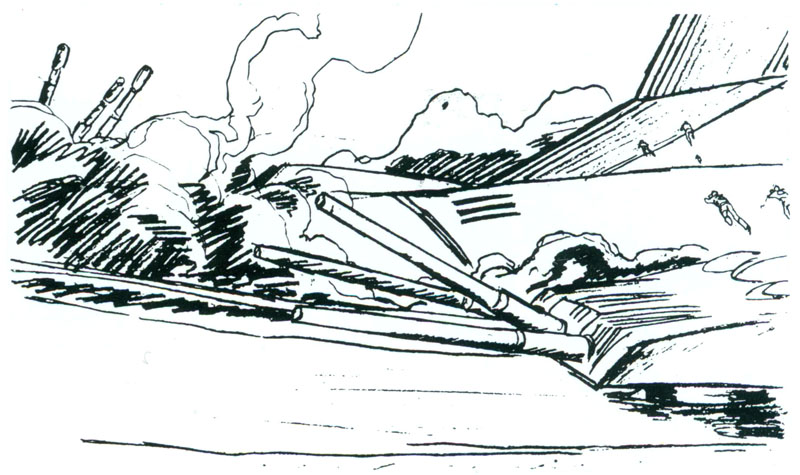 – Kodai jumps into Dessler’s ship before they can drift apart

– Hand to hand fight in the warship. (Dessler’s soldiers are androids)

– Small explosions as each group advances 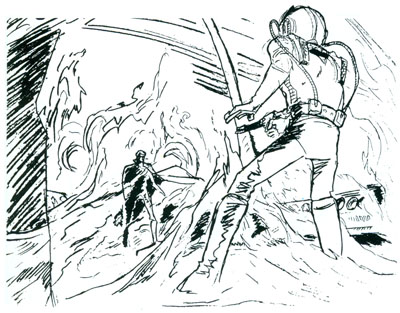 – Dessler takes command of the struggle. He stands resolute amid the flames.

– Kodai and Dessler confront each other, separated by flames

– Dessler, who swore revenge on Yamato, is now a cyborg from the waist down. There is no longer a Planet Gamilas and all his subordinates are gone. However, he now understands the feelings of Domel and his fight with Yamato was a good one. He jumps out a window to his death.

– Hand to hand combat on the ship; fighting methods and weak points for android soldiers

Two spacefleets between the orbits of Pluto and Planet 11.

The EDF space navy (with a new and powerful flagship) 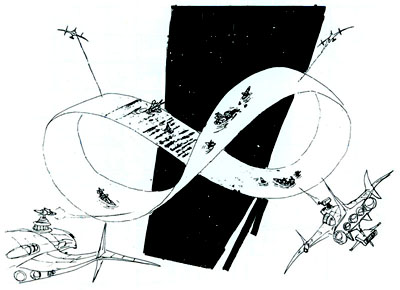 Annihilation of the Earth fleet by the enemy’s new strategy: Mobius Operation

– It intercepts missiles with energy weapons

– Both are on roughly equal terms, but the enemy fleet has a slight edge

– UFOs appear over the base in a large formation 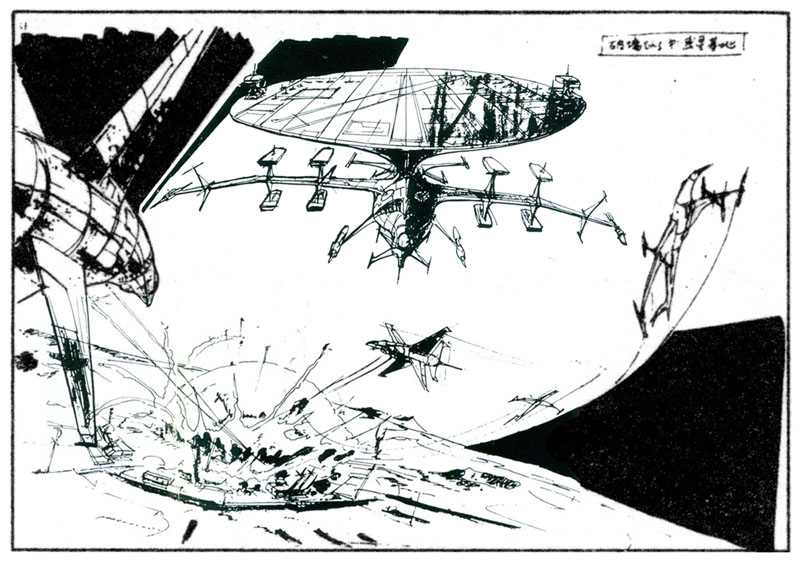 – The base desperately defends itself, sends out an SOS

– The base gradually loses strength (it becomes a one-sided battle)

– Destruction of the ground base

– The new flagship fights with cutting-edge weaponry. (Neo-Wave-Motion Gun? Give consideration to this.)

– The Earth side is superior 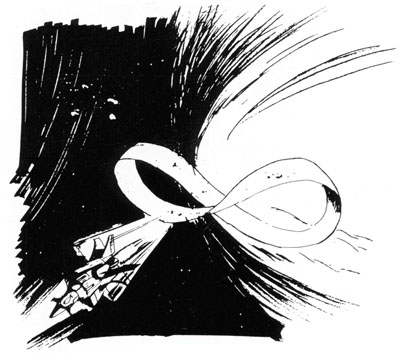 – They seem to be escaping, but then return to their original position (could some materialize while others disappear?)

– Even when some are hit and destroyed by missiles, others reverse and fly back into the ring. The Earth side is dumbfounded by this.

– The Earth fleet is confused, uncoordinated

– Meanwhile, the UFO fleet continues to advance toward Earth

– The White Comet approaches, crushes every ship caught up in the Mobius ring

– The Earth fleet is annihilated

Design the cutting-edge weapons of the new flagship

Visualize and design the Mobius Operation theory for SF presentation

Continue to the Making of Farewell to Yamato, Part 6: The Leiji Matsumoto Draft