Those who are well-versed in the continuity of the Yamato saga will recognize the story told in part 2 as the setup for Dessler’s participation in the TV series Yamato III (known to Star Blazers viewers as The Bolar Wars). Of course, Dessler had a huge part to play in that story, and though the original plan was for him to turn against Yamato‘s crew once more, the shortening of the series from 52 episodes down to 25 prevented the tale from taking that particular turn. 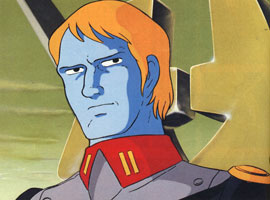 Dessler ponders the future of his empire.

Instead, Dessler’s growth as a character continued when he vowed to take the path of a benevolent dictator. He had reclaimed his homeland and brought down the cruel Bolar Federation, which had perhaps demonstrated to him what his previous empire might have become. Afterward, it was felt by Producer Yoshinobu Nishizaki and others that there was little left to do with Dessler, and his appearance in Final Yamato, while pivotal, was very brief.

Ironically, Nishizaki said afterward that were he to create another Yamato movie, it would focus on Dessler. But though that tale was destined to remain untold, Final Yamato would not quite be the final word on Dessler’s story. The second of the two “This is Animation” books generously built a bridge between Yamato III and Final Yamato that gave us one more look at what Dessler was up to during that time. That text is presented here in English for the first time.

3: Toward the Final Battle 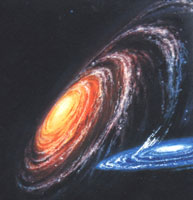 Following the destruction of the Bolar Federation’s major space fortress and the revival of Earth’s sun, another Prime Minister took the place of the deceased Bemlayze and declared martial law over the galaxy. Dessler and his generals met this threat head on, striking quickly and efficiently to crush further Bolar encroachment and force them back to their original solar system. In a matter of months, the Bolar Wars came to a conclusive end.

Galman/Gamilas and the solar system around it was calm and peaceful. The citizens’ lives had improved greatly as military forces could begin to stand down and more resources became available in this unprecedented post-war phase. But the calm was not to last.

One day, Dessler’s chief of astronomical observations reported unusual activity near the central core of the galaxy. Stars in that region had exhibited a strange flaring that, in fact, Dessler had himself observed at night; a sight that was disturbing even to him. The chief believed this phenomenon was caused by a temporal distortion of the time/space continuum. At present, it was too far away to pose any threat, but Dessler asked what would happen if the distortion increased.

“The pathway between two realities could be opened,” the chief replied. “Something might emerge from another dimension. Or our universe might be drawn into another. Either way, the consequences would be beyond our imagination. However, I think it is almost impossible for this to happen.” 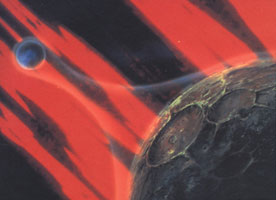 Planets are torn apart by the tremendous
release of energy.

Dessler knew well that reality consists of unified space and time. All the galaxies in the Local Group belonged to the same space and shared the same time flow. But it was also theorized that many different parallel dimensions existed, and no one know what would happen if two of them were to somehow cross over.

Dessler ordered a probe sent to observe the phenomenon more closely. Within a month, it ceased transmitting signals. The Ninth Investigation Unit was dispatched to investigate. As they passed a remote outpost, they issued a transmission to register their progress. It was the last anyone heard of them. General Talan delivered the news to Dessler, informing him that not only was no trace of the fleet found, there was also no trace of the outpost, or indeed the planet on which it was built. 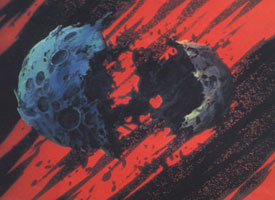 “What is going on?” Dessler demanded. “The planet disappeared?”

“I have no idea, sir. Many telescopes were trained on the area during that day, but they did not observe any abnormality except for that spacial distortion.”

Anxious, Dessler ordered further study of the data that had been collected. The findings only deepened the mystery. Abnormally strong gravity waves were detected, originating from a gigantic, deep black object floating above the disc of the Milky Way. 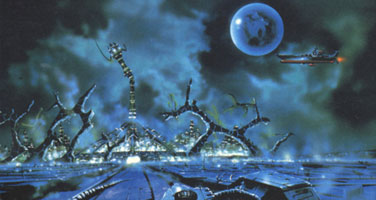 Ruins of the Galman/Gamilas homeworld

Even as the scientists of Galman/Gamilas observed it, the very fabric of space began to split apart. The light of nearby stars was bent and distorted, altering the shape of the Milky Way itself. Dessler’s worst fears were confirmed; two dimensions were merging. Then, the impossible happened, the distortion opened to a length of thousands of light years and another entire galaxy suddenly appeared in a whirl of light.

Dessler was with his command fleet, patrolling the borders of Galman/Gamilas territory. The science unit’s prediction was the worst imaginable: the very core of the Milky Way could be disrupted by this massive event. Immediately, Dessler issued orders to return to their home planet.

En route to Galman/Gamilas, Dessler ordered the ships of his fleet to stop and collect refugees wherever they were encountered. The masses of deadly energy building behind the fleet made this very dangerous, but as their leader, Dessler could not simply abandon his subjects to certain death.

The storm of gravity waves caused by the two colliding galaxies reached the solar system containing Galman/Gamilas. Discharge phenomena, resembling tremendous bolts of lightning, were observed from time to time on the surface of the planet Starsha. It soon enveloped the planet in a storm of global proportions and spread to Galman/Gamilas, ripping into factories and military bases alike. Dessler’s ships could not perform a warp in any region of space suffused by the expanding energy, for the risk of falling into another dimension was too great. Instead, he directed his fleet through the galactic disc and out through the southern side of the Milky Way, where the disruptions had not yet penetrated. As his flagship left Galman/Gamilas behind, Dessler stared helplessly as the second empire he built out of his own sweat and blood fell into ruin.

Almost as abruptly as it began, the event ceased. The huge “invader” galaxy disappeared back into the dimensional rift, which sealed behind it. Only ten hours had elapsed, but in that time entire species had disappeared from the Milky Way forever. Even the remnants of the Bolar Federation had gone silent.

Days passed, and the situation gradually stabilized again. Stellar collisions that had been observed in the galactic core were now dying down. Dessler decided it was safe to return to the Galman/Gamilas homeworld and search for survivors. Even from orbit, the ruins of the Royal Palace looked horrible. Dessler entered the ruins of his former home with Talan by his side. 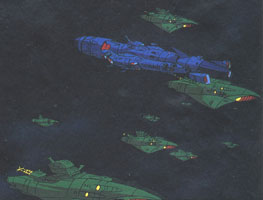 Something unusual lay where Talan pointed. It was the only object of color in an ocean of grey debris.

“These are flowers from Earth.”

Dessler took a white rose and put it in his chest pocket. It must be from Kodai, he thought. Seeing what was left of the planet, Yamato‘s crew must have thought that Dessler had died.

“I can’t wait to see Kodai’s reaction when he learns otherwise,” Dessler said to Talan, chuckling.

A communications officer appeared, breathless from running. He delivered a fateful report:

“My Lord, there is a problem. We detected warp signals from the Earth system. Yamato is fighting with an enemy called the Dinguil Empire. Yamato‘s fleet has already been annihilated. It seems that only Yamato is left.” 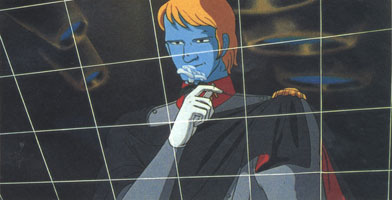 Leaving the civilians behind to start rebuilding, Dessler ordered ten of his most able ships to follow his flagship in a mad dash to Yamato‘s aid. It was said later that no such group had performed a greater number of space warps in such a short time with such precision. Each time they emerged from a warp, the troops only had a moment to notice that the stars around them were decreasing in density, indicating that they were getting closer to the outlying region of the galaxy where Earth could be found.

In a few short hours, Yamato appeared before them, surrounded by dozens of Dinguil warships. Dessler barked an order:

“Inform Yamato that I will personally take care of these obstacles!”

Dessler’s fleet was manned by many brave veterans. They swooped straight into the mass of Dinguil’s ships and fired volley after volley of missiles. 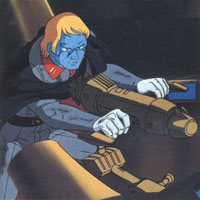 “Kodai, what are you doing? Get away from here!”

Dessler could not help but shout. He could see Captain Okita standing behind Kodai on the viewscreen. Okita nodded slightly. Dessler understood immediately what he meant. The great captain who traveled over 148,000 light years was exactly as he had envisioned him.

Bearing down on Emperor Lugarl’s Dinguil fleet, Dessler was now allied with Yamato and Earth.

“I’ve never seen fighting like this,”Dessler thought. It was a war against natural disaster and foreign invaders. He realized it was exactly what Yamato was born to do. But now the main weapon of Lugarl’s flagship was lining up to end her mission. Dessler could see it all from his command deck. 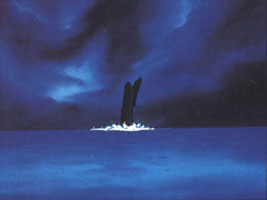 Yamato sinks into the waves.

“Prepare the Hyper-Dessler Cannon,”he ordered. “Use maximum speed to close the range! Protect Yamato! Yamato is the conscience of space!!”

Dessler was shouting unconsciously. His hand strongly grasped the lever of the Hyper-Dessler Cannon.

“I know what Yamato is going to do. I won’t let the others stop her.”

Dessler pulled the trigger. The immense pressure from the release shook his ship for a moment. The wave of tachyons collided with Lugarl’s vessels and wiped them out of existence. It was over.

A few hours later, the threat of Planet Aquarius had been eliminated, but at a great price. Yamato was slowly sinking into an ocean floating in space, now all that was left of the giant water world. Some mysterious force seemed to exercise its will over this ocean, preventing it from freezing and denying Yamato her final resting place.

Dessler stood on deck and saluted the familiar ship. Tears fell from his eyes, and he did not wipe them away. 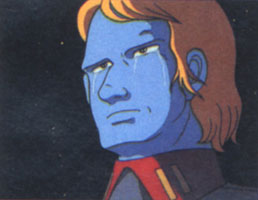 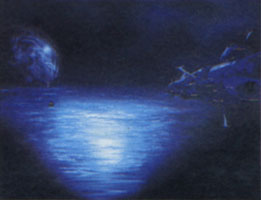 A velvety sun lit up the Earth and warmed the ocean where Yamato slept. A column of water stretched into space, the top sparkling in the sunrise. Dessler was certain he could see Yamato‘s shadow in the sunlight.