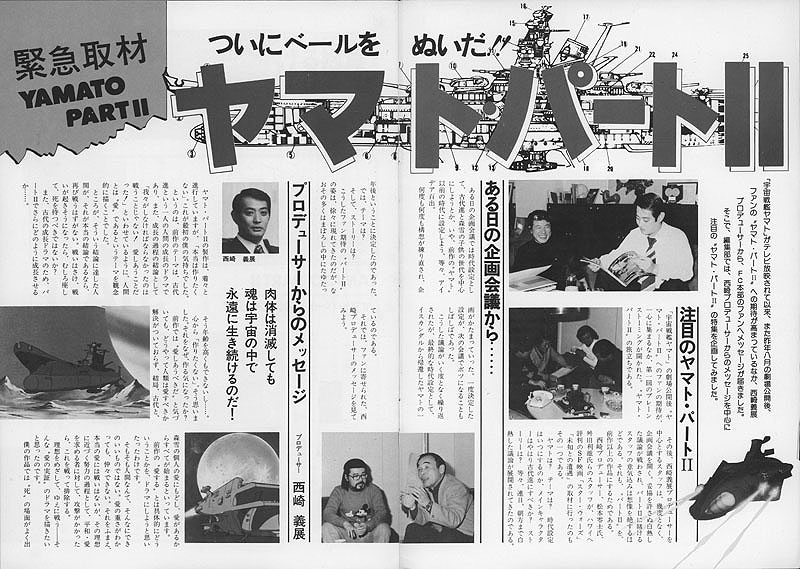 After Space Battleship Yamato was broadcast and released to theatres in August of last year, and amidst the fans’ rising expectations, Producer Yoshinobu Nishizaki issued a message from the fan club headquarters about Yamato Part II. Therefore, the editorial staff planned several features around Mr. Nishizaki’s message. 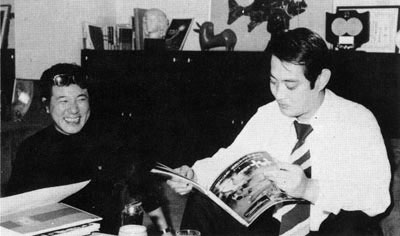 The Notice for Yamato Part II

After the theatrical release of Space Battleship Yamato, the first brainstorming sessions began with gusto while fans’ expectations were on the rise. It was the launch of Yamato Part II.

The staff centered around Producer Nishizaki for one meeting after another. Heated debates played out through smooth compromises and the enthusiastic staff put all their imagination into the task. This was done to make Part II even better than the previous work.

Producer Nishizaki, Leiji Matsumoto, Toshio Masuda, and others on the staff went to Hawaii to take in the acclaimed films Star Wars and Close Encounters of the Third Kind.

Yamato…? The theme…? Should it be set in the same time period with Kodai as the main character? The story…?

The heated debates went on into the early morning hours every day. 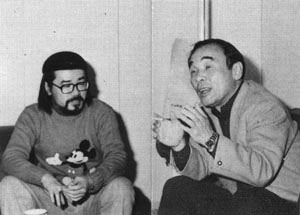 From the Planning Meeting on a Certain Day…

In the days before the first Yamato, planning meetings went on every day and a great variety of ideas arose as Kodai and Yuki were born. The concept was developed over and over, decisions were made, and plans were set. It was common for all the decisions to then be rejected in the next meeting.

This was repeated many times as the final product emerged by degrees until Yamato finally returned from Iscandar after one year.

Though Part II has gradually appeared amidst fans’ expectations, much of it is still a floating illusion. Let’s see what message Producer Nishizaki has prepared. 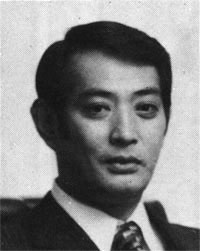 Even if the Body Disappears, the Soul Lives on Forever in Space!

Though the production of Yamato Part II is advancing steadily, my first feeling was, “I really don’t want to make it.”

The theme of the previous work was the drama of Kodai’s growth and his realization that “we never should have fought, we should have loved one another!” The humanistic theme of “love” reached an ideal conclusion. If you conclude that this is true, you’ll never fight again. But if a fight breaks out, would you rather avoid it and sit down to await your death?

In addition, how would we continue Kodai’s growth drama in Part II? We could not make him older, and so…

“I don’t want to make it,” I decided sincerely. Or so I thought.

So why did I go on to make it?

In the previous work, even if you agree that “it is necessary to love each other,” this solution doesn’t say how the human race should go about it. After all, with Kodai it is shown that everything starts with his personal love of Yuki.

To say what “love” means in concrete terms was the reason I decided to go ahead and make this story. To begin with, humans are not perfect. Even if we could understand the importance of love, it’s hard to put it into practice. Based on that fact, beings of true love would never fight a war. But in the effort to reach that ideal, we have to fight and defeat enemies who would attack the seekers of love and peace.

Seeking the ideal, fighting for the ideal; I want to make a drama about “proving the means of love.”

Although many scenes of “death” appear in my work, I thought that this time I wanted to clarify my idea of “life.” When thinking about death, there are two ways of confronting it; the Western idea of “we’re all going to die, so let’s live for now and have fun,” and the Oriental idea that “even if the body disappears, the soul will live on forever in space to resurrect and revive again.”

I want to show the latter idea in this work. Is Yamato really “life” or “death”?!

What will be the fate of Kodai and Yuki?!

In Part II, they may meet “death,” but they will do their best to accomplish their purpose and not to die. And I will express their efforts through and through.