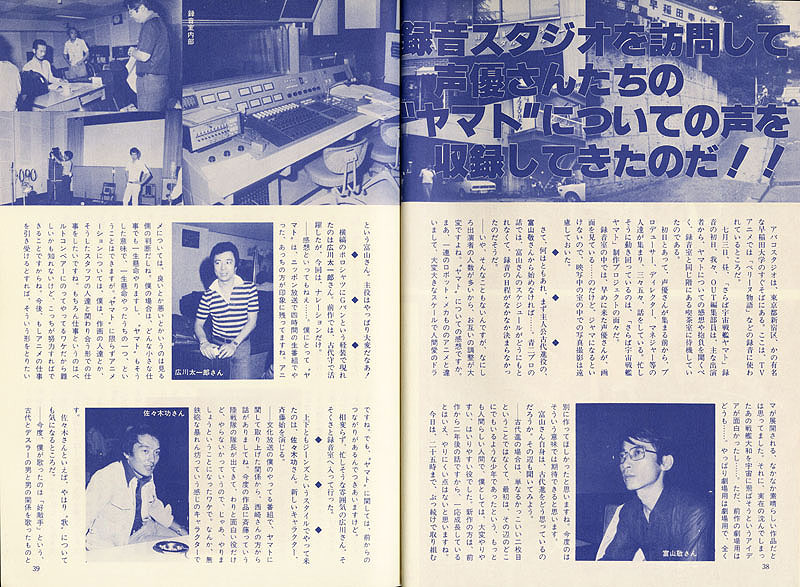 We Visited The Recording Studio and Recorded the Voices of the Cast About Yamato!

Avaco Studio is located in Shinjuku, Tokyo and is very close to the famous Waseda University. This studio is used for recordings of TV animation.

On the afternoon of July 3, the first day of recording for Farewell to Yamato, we editorial staff members of OUT were waiting at a coffee shop on the same floor as the recording room of the studio to interview the main cast about their thoughts and expectations.

Since today was the first day, the producer, director, and supervisor were gathering and talking. The busiest ones were the staff members of Farewell to Yamato.

In the recording room, the voice actors who arrived early were watching the film…but we did not photograph them in the screening room, worrying that we might bother them. 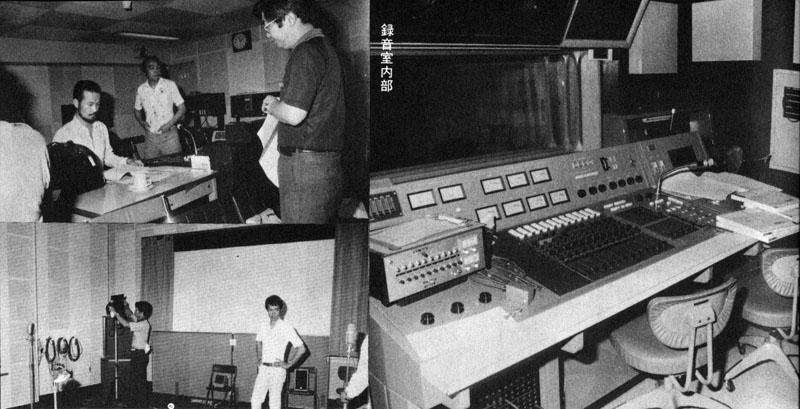 At any rate, we need to start with Kei Tomiyama, who playes the main character, Susumu Kodai. According to Aoni Pro [Aoni Production, the biggest talent agency for voice actors], it was very hard to set the date of this recording owing to Mr. Tomiyama’s tight schedule.

Tomiyama: No, not really true. Since there is a large cast in this film, it’s hard to coordinate all our schedules.

My thoughts on Yamato? Well, I think of it as a wonderful work since it developed the drama of human love on a very large scale, different from the usual “robot anime” stories. Also, the idea of sending Yamato into space, the battleship which actually existed and sank, was interesting. Yet the previous feature film was, well…I wanted the staff to make a new movie for theatrical release. So now we can put all our expectations into the forthcoming one.

What does Mr. Tomiyama himself think of Susumu Kodai? Let’s ask about that.

Tomiyama: He’s not just a simple handsome character. You could see that at the beginning he was an ordinary boy. He had a lot of humanity. For me, this type of character is very easy to understand and play. In this new story two years have passed since the previous work, but although he has grown up, I don’t anticipate any difficulty in performing him.

Mr. Tomiyama said he would perform without a break until 1 am. The main role is definitely hard work!

Mr. Taichiro Hirokawa arrived in casual clothing, a striped polo shirt and jeans. In the previous work he played the role of Mamoru Kodai, but this time he will only be the narrator.

Hirokawa: My thoughts, hmmmm. For me, I was more impressed with the 4-hour live radio program by Nippon Broadcasting System. As for the anime, whether it was good or bad depends on the judgment of the viewers. In my case, I do my best every time, no matter how small my job may be, and I gave it my best on Yamato. In animation projects, including Yamato, I prefer those in which I can get involved with its animation staff. Of course, it’s difficult since the process is like working on a conveyor belt, but it’s possible if we try. When I accept voice acting jobs from now on, that’s how I’d like to do it. but I will do Yamato because of our previous relationship.

Mr. Hirokawa seems to be as busy as usual. He quickly left for the recording room.

Mr. Isao Sasaki arrived dressed in denim from top to bottom. He will perform a new character, Hajime Saito.

Sasaki: I have my radio program on Nippon Cultural Broadcasting, and on it I talked about Yamato, so Mr. Nishizaki made me an offer: the new movie will have a new character, the captain of the Marine Corps, and he is a quite an interesting guy. Would you like to play him? So I said I would. Saito is a daredevil, a wild man.

As for Mr. Sasaki, we are interested in his singing.

Sasaki: For this film, I sang a song titled The Rival which was about the man-to-man relationship between Kodai and Dessler. Another piece is Teresa Forever. I heard there would be no theme song; the main theme is played by instruments only. Regarding the relation between singing and playing a role, I sing the song as if Kodai were singing it. My voice plays another role. The viewers may find it strange, it might be difficult.

What does Mr. Sasaki think about the theme of the forthcoming Yamato?

Sasaki: The new work includes the eternal theme, that both fighting and loving are inseparable from human beings. I think there is no solution, It’s just raising an issue. This is not something we understand by watching a film. Each of those who sees the movie should think for themselves.

“I cannot brag because I am new,” Mr. Sasaki said, but he kindly shared his thoughts. Immediately after this interview, he started studying his script. 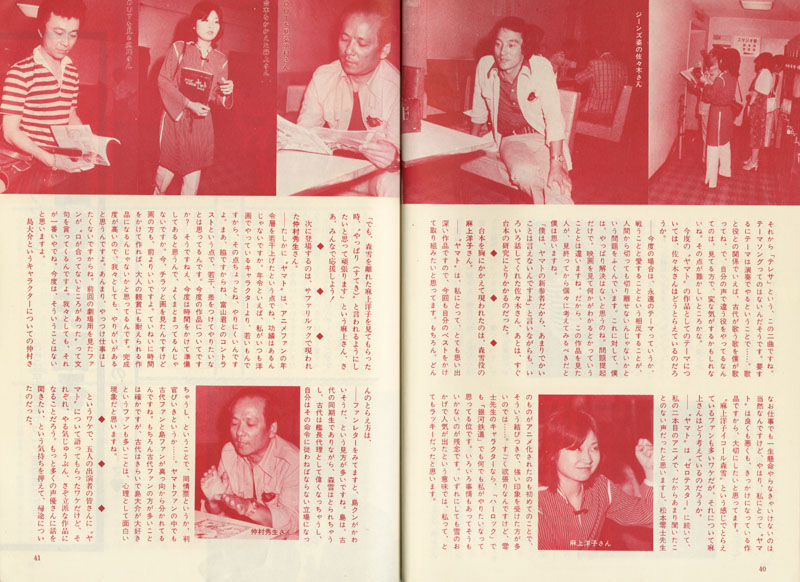 Ms. Yoko Asagami, who played the role of Yuki Mori, arrived holding a script in her arms.

Asagami: I have many memories of Yamato, so I would like to do my best this time, too. Of course, I should do my best on any production. But Yamato was a turning point, so I care for it and cherish it.

There were many fans who regard Ms. Asagami as equal to Yuki Mori. What does she think about that?

Asagami: Yamato is my second anime work after Zerotester, so my voice was not familiar to many of them. Also, it was first time a work by Mr. Leiji Matsumoto was turned into animation, so that earned it strong attention, I guess. I may be too eager, but I want to play any character of Mr. Matsumoto’s, whether in Captain Harlock or Galaxy Express. But for many combined reasons I can’t do so, and I regret that. At any rate, my popularity increased because of Yuki, and I think I was very lucky.

“But I will work hard so that those who see Yoko Asagami separated from Yuki Mori find my performance wonderful,” Ms. Asagami said. Let’s cheer her on! 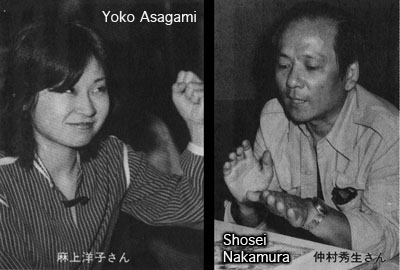 Next is Mr. Shosei Nakamura [the voice of Shima Daisuke], who dressed safari-style.

Nakamura: I guess Yamato made a contribution by increasing the age of anime fans. Speaking of age, Shima Daisuke is younger than the characters I usually dub in foreign films, so in this regard he is hard to perform. But he is a supporting character, so I want to add difference, giving some contrast to Kei Tomiyama.

About this film? Well, since the staff took a lot of time to prepare, I think it is well-organized. I just saw some animation, and it looks better than the previous one. I think if the staff takes enough time with it, the movie can earn the respect of adults. Since it is very high-quality, it’s rewarding for all of us. We don’t want to do an easy job. Those fans who watched the previous film complained that the mouth movements didn’t match the voices, and we hate that the most. It won’t happen this time, I think.

As for Mr. Nakamura’s view on Shima Daisuke…

Nakamura: Many fan letters are sympathetic to Shima. Though he and Kodai are equals, Kodai got Yuki and became the acting captain, and Shima has to obey Kodai’s orders. He’s the sympathetic underdog. Among Yamato fans, Kodai fans and Shima fans are at odds with each other. Of course, there are more Kodai fans, but some dislike Kodai in favor of Shima. This is an interesting psychological phenomenon.

Five cast members talked about their views on Yamato. Everyone has it in mind to do their best, so the forthcoming work will be a great one. Supressing the desire to listen to more actors, we departed.