The call of the SF or space movement is everywhere. The title with the biggest following is Star Wars.

But we should keep in mind that before Star Wars we [Japanese] had Yamato. Since Yamato is the origin we should very much be proud. In short, to Japanese, a work made by our own blood is a natural fit, I guess.

Anyhow, to analyze the current SF movement, we set up an anonymous discussion about Star Wars and Yamato. You readers can also ponder which is better.

Also, the second half [of this article] reports on the Yamato Symphonic Concert that started in July and is being held nationwide, again with another discussion and illustrations. Playing a Yamato record while reading along is recommended. 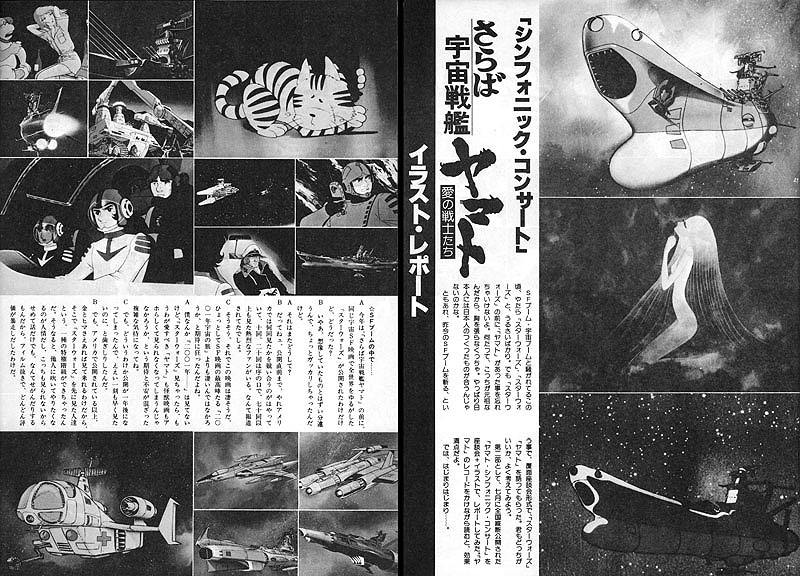 Amidst the SF movement

A: This year before Farewell to Yamato, the similar space SF movie Star Wars came out. The movie stunned audiences and was welcomed worldwide. What do you think of it?

B: Well, it was quite different from what I expected and a bit disappointing.

A: What made you think so?

B: Before it was released, reports said that in the U.S. people were competing over how many times they saw it. Ten times or twenty were common and one avid fan saw it more than 70 times.

C: Yeah, that’s also what I heard and I began to think the movie was great. I expected too much, hoping it would surpass 2001: A Space Odyssey, the best of the SF movies.

A: I haven’t seen 2001, but was worried that after seeing Star Wars my beloved Yamato and Godzilla movies would seem childish and I might lose interest in seeing them any more. That was a mixed feeling of expectation and anxiety.

C: But somehow the release [in Japan] was delayed for a whole year and it was frustrating. I wanted to see it sooner!

B: Besides, if you have time and money, you can visit the US and see it with ease. So there came to be some kind of status for those who already saw Star Wars. They naturally tended to brag and we “yet-to-see-it” types begged them to tell us what it was like, so rumors and impressions spread around without any actual movie.

C: All that was actually revealed were typical B-29 gunport-like sequences and the Falcon launching from the spaceport. All other information was just fragments that made us more frustrated.

B: Moreover, the new word “novelization” came out and it seems like “based on” or something like that, and we read it to learn what it’s about. Hence in my brain there was a perfect space adventure serial called Star Wars thanks to the movie stills.

A: And those copycats such as The War in Space [Toho, 1977] and Message from Space [Toei, 1978] were just disappointing.

C: Looking back now, both had some taste though. (laughs) 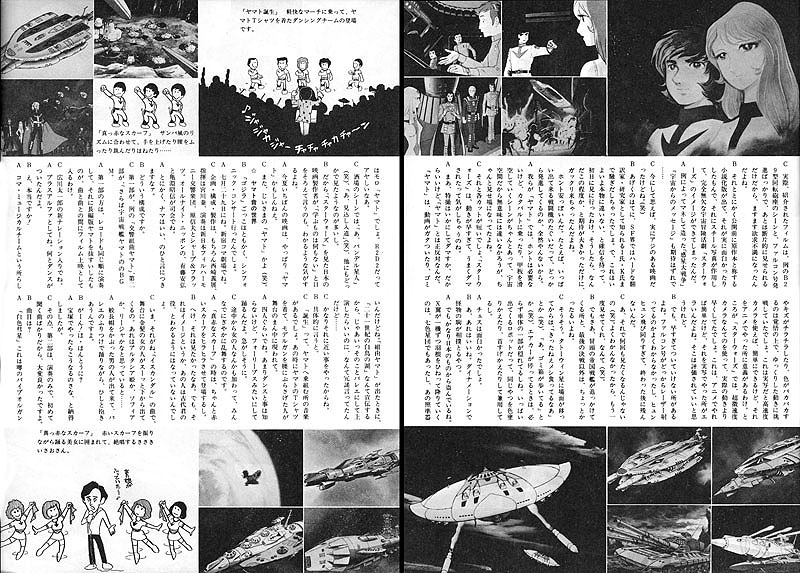 B: Meanwhile Mr. I and Mr. K, both well-known SF experts and translators, passionately gave their thumbs-up. [Translator’s note: “Mr. I” is Norio Ito and “Mr. K” is Chiaki Kawamata, both pivotal Yamato fan club members who took over the editing of OUT Magazine and founded Rendezvous. Read about their exploits here. After their time in fandom, both became professional writers; Ito translated the definitive Japanese edition of 2001 and Kawamata became an SF novelist.]

So I was quite certain about the movie’s authenticity and saw the first show on opening day. Then, “Well is that it?” was my genuine feeling and I was very disappointed. It really looks cheap. For example, we see many (star)fighters but do not know where they are launched from.

A: Yamato has superfluous sequences of them on catapults or sliding on the runway. In space it is unnecessary, but they caught our attention.

C: Also, in Star Wars each shot is short and quick. Too many rapid movements feel like tricks, or cheating.

A: On the other hand, movie special effects are all about cheating. It’s quite the opposite of Yamato. Yamato‘s animation sometimes jumps. Dust or cel scratches are common, or a sudden color change in some area is somewhat unavoidable. But it met the challenge of slow motion.

In live-action, high speed photography makes that possible, but what is really meaningful is that Yamato realized it in animation. Star Wars used a super slow photography camera or somesuch, and the image goes by quicker. This is easy for anime but it is meaningful to realize it in live action. I guess that point deserves attention.

B: But sometimes it’s too fast and busy to follow. I wasn’t sure from where the Falcon shoots its lasers, and everything flying around is messy and disorganized. I can’t remember anything.

C: That might be why you want to see it again and again (laughs). It’s like, “I can’t see it very well. Could you show me again, please?” (laughs)

B: Except for the beginning Imperial battleship chase and the final battle, the pacing is a bit slow.

C: Agreed. As the story progressed on Tatooine, I couldn’t help thinking, “what a poor supper they have!” or “oh, that dustbin is walking!” (laughs) When the air car [landspeeder] parks, the other side of the body is hidden. Also, the same robots appear repeatedly with repainting or with their parts exchanged.

A: The chess sequence looked interesting.

B: That was very good. Monster chess pieces Sumo wrestling by Dynamation.

A: On the other hand, many [elements] are borrowed or stolen from Japan. The X-wings pitching and diving was already seen at the Rainbow Cluster [in Yamato Series 1]. The targeting scope is very much the same as in Yamato. Besides, R2-D2 is very suspicious.

[Translator’s note: “Bandel” is a creature from Toei’s Captain Ultra TV series and “Mikoshi Nyudo” is a monster from Japanese folklore. Both are shown below with their Star Wars “brethren.”] 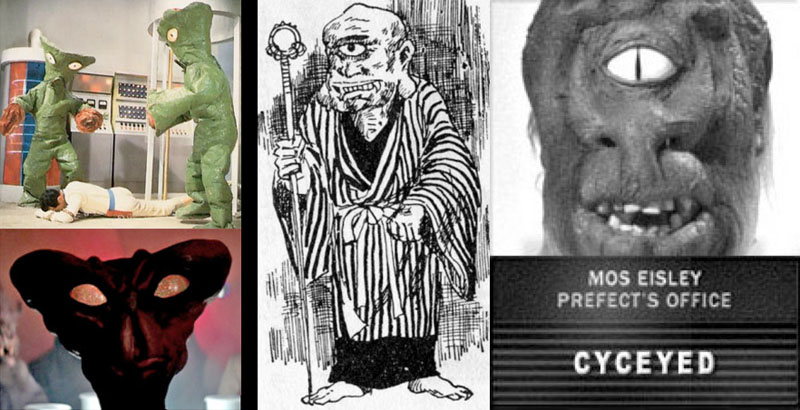 B: So when Japanese movie crews say there’s nothing to be learned from Star Wars, it’s somewhat understandable.

A: The best movie this summer is going to be Yamato, perhaps. [Translator’s note: spoken in the manner of an elderly man]

Special thanks to Sword Takeda for translation. 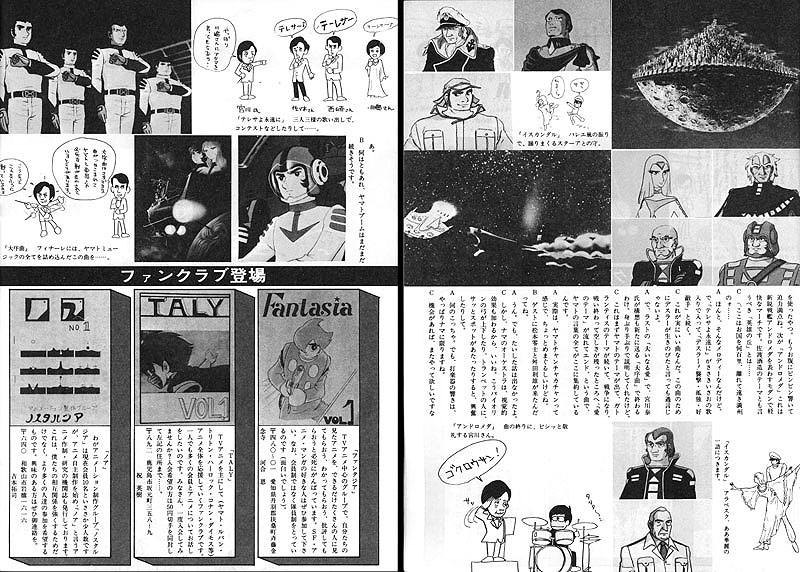 The World of the Yamato Concert

B: It was a symphonic concert, different from the one for Godzilla.

A: It was on July 29 at the Shinjuku Koma Theatre.

C: Of course, the plan/organization/production was by Yoshinobu Nishizaki and the conductor was Hiroshi Miyagawa. The performance was by the New Japan Philharmonic Orchestra and Nobuo Hara Sharp & Flats. Yasuhiro Saito and Akinobu Kamebuchi of All Night Nippon were the MC’s.

A: Anyway, all I want to say is this: The live concert is great. 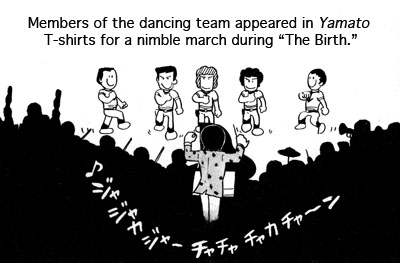 B: How was it arranged?

C: The first part was Symphonic Suite Yamato and the second part was Farewell to Yamato BGM. [BackGround Music]

A: The first part was performed in the same order as the record and included selected scenes from the film. There were no films shown between the songs.

A: When it was advertised that the Koma Musical Team would be performing ballet, I joked that it would be like Swan Lake of the 21st Century.

C: It was pretty close to that.

B: Be more specific.

C: There is a piece for the boarding of Yamato called Birth. They walked on stage wearing Yamato T-shirts for that, with model guns hung on the waist.

A: It was about four people. It looked like follies with plain-looking women who didn’t really know how to dance. It seemed rushed.

C: More women joined them about halfway through it and danced wildly together.

A: They properly waved red scarves during The Scarlet Scarf.

B: I wish I could have seen that. It said someone appeared in the role of Kodai, but I don’t understand how they preserved the image.

C: During the piece titled Iscandar, a blond woman appeared from underneath the stage. I thought it was Princess Artesia, or Sophia, or…

A: A man came out wearing a long cap, assumed a ballet pose, and they danced in an embrace.

A: I understand that’s how they do it in Takarazuka [Opera Company].

C: The first song of the second part was very good, because I was hearing for the first time.

B: What was the song?

A: White Comet, the one that was rumored to use a pipe organ. You could feel it in your stomach, and its power was perfect. The next one was Andromeda, for the new battleship. It was like a march, modern and lively. Then there was Hero’s Hill, which should be called the theme of Dr. Sado…

C: Here we are in Manchuria, hundreds of miles far away from our country…

[Translator’s note: this is from a famous war song titled War Comrade written in 1905, during the Russo-Japanese War. It is sung for a friend who fought bravely but was shot. The “singer” tries to rescue him, but the friend asks him to go on fighting instead. Later the singer comes back to find the friend, hoping he is still alive, but he is dead. On the way home, the singer writes a letter to his friend’s parents, trying to tell them about his final days. Thinking of the parents, he sheds his tears. The song is a much-beloved masterpiece, and has a strong resemblance to Hero’s Hill. Hear it on YouTube here.]

A: It really is such a melody. Next Isao Sasaki did the song Teresa Forever and continued with Dessler: Attacking/Loneliness/The Rival. [Medley]

C: That’s a really good song. It’s not an exaggeration to say that Dessler survived just for that.

A: The last one was Great Love, which ended in a new composition by Hiroshi Miyawa called Overture. He illustrated it with gestures.

C: It started with the Yamato theme and went into the Gatlantis theme. It then moves into a battle and finishes with a transition into the love theme. All the phases of Yamato are consolidated in it.

A: Actually, it changes with dizzying speed, something like Yamato-chan-chaka-chan.

B: I heard that Leiji Matsumoto and Toshio Masuda came out as guests.

A: Yes, but they didn’t say very much.

C: However, the visual impact of the orchestra was very good. The violin bows going up and down, the people on the trumpets, the spotlight whipping around, it was exciting.

A: What are you saying? The sound of the percussion instruments is the best thing in a live performance.

C: If there was a chance, I’d want to go again.

B: Well, the Yamato Boom is likely to continue.