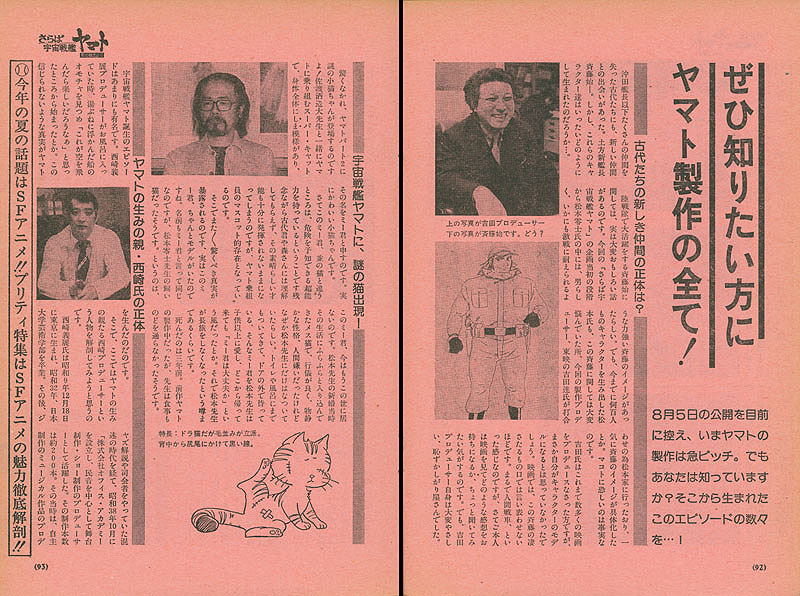 Yamato Production is now at a rapid pitch with the August 5th premiere close at hand. But do you know about it? Many of these episodes were born from there…!

Kodai lost many colleagues under Captain Okita and now meets new companions: Hajime Saito [Sgt. Knox] and the new Captain Hijikita [Gideon]. But how on Earth were these characters born?

In fact, there is a very interesting story regarding Hajime Saito and the marine forces. He was a masculine character from Leiji Matsumoto’s initial draft for Farewell to Yamato. There seems to have been an image of a powerful Saito who could endure fierce combat. However, though Mr. Matsumoto had invented hundreds of characters before, this Saito worried the producer.

Matsumoto went to meet with Toei producer Itaru Yoshida, and the embodiment of Saito’s image was realized in a flash. The truth was dreadful. Though Mr. Yoshida had produced many movies before now, he certainly never thought he would become the model for a character.

It is not possible yet to describe Saito’s first appearance in the movie. The impression is that he’s like a human tank, but you’ll have to see it for yourself. However, Producer Yoshida is quite sheepish in comparison.

The Mysterious Appearance of a Cat in Space Battleship Yamato! 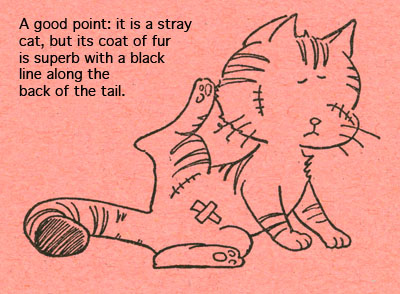 Believe it or not, a mysterious cat appears in Yamato Part II! A super-cat boards Yamato with Dr. Sado. There are stripes over his entire body and his name is Mi. It is actually a cute kitten, but Mi is very different from the average cat; he possesses supernatural powers that can foresee danger. Unfortunately, Kodai and Yuki do not understand it, but these talents cannot be fully demonstrated in the role of the Yamato crew’s mascot.

Now this amazing truth can be revealed. The actual model was named Mr. Mi, and was the housecat of Leiji Matsumoto. Mr. Mi is no longer with us in this world. Like a scalpel, this cat unintentionally penetrated the home of the newlywed Matsumoto. He was quiet and well-mannered, and took to Mr. Matsumoto even though he was a misanthrope.

He followed Mr. Matsumoto into the restroom and waited outside the door of the bath. Mr. Matsumoto loved him like a child, and would constantly ask, “How is Mr. Mi?” There is even a rumor that Mr. Matsumoto no longer went on long trips.

Mr. Mi died three years ago. This happened when Mr. Matsumoto was working on the first Yamato, and he was so heartbroken he lost his appetite. 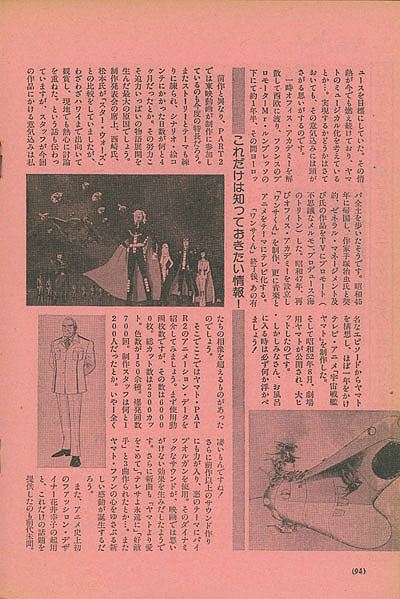 The episode of Space Battleship Yamato‘s birth is very famous: when Producer Yoshinobu Nishizaki was taking a bath, he stared at a toy ship floating in the hot water and thought, “it would be fun if that could fly through the sky.” The incredible truth is that this resulted in Yamato. Therefore, we will try here to dissect this person called Producer Nishizaki who is Yamato‘s true parent.

Mr. Yoshinobu Nishizaki was born in Tokyo on December 18, 1934 and graduated from Nippon University’s Department of Art in 1957. Throughout the “age of confusion” he did jazz commentary and presentation. After that, he founded Office Academy Ltd. in October, 1963.

He played an active role as a producer of stage and theatre shows, about 200 productions in total. His goal at the time was to produce independent musical works, a passion that still burns in his desire to make a Yamato musical. Whether this materializes or not, the ambition is worthy of respect.

Office Academy was dissolved for a while when he moved to Western Europe to work under a French promoter for about a year and a half. During that time, he toured all of Europe.

He returned to japan in 1970 and signed to become the general manager of the artist Osamu Tezuka and promote his works, such as Mysterious Melmo, for TV and he produced Triton of the Sea. Office Academy was re-established in 1972 to produce Wansa-kun with the aim of combining anime and music for TV.

After Wansa-Kun ended, he spent a year developing the plan for the Space Battleship Yamato TV anime. The movie version of Yamato premiered in August 1977 and became a big hit.

So when everyone takes a bath, they should float something without fail!

All the Information You Want to Know!

Unlike the previous work, the best point of Part II is that Toei Animation participates in the production. Moreover, the story and theme were very carefully developed. The script and storyboard were created over four months. Maximum effort went into creating a story of tremendous power.

In Mr. Nishizaki’s press conference, Mr. Matsumoto compared it with Star Wars. The staff had gone to Hawaii expressly to see it and discuss it enthusiastically. But he also conveyed that the enthusiasm the staff put into this new work far exceeded their original plans.

No, this is nothing less than absolutely great, and the power that elevates it above the previous work is in the sound: a pipe organ is used for the theme of evil. This dynamic sound will create a stunning effect in this movie.

In addition, three new songs were made: The Rival, Teresa Forever, and From Yamato With Love. A new impression will be born to shake the heart of a Yamato fan. Also, there is the first-ever appointment of fashion designer Yukiko Hanai to anime. Even a topic such as this is unprecedented.