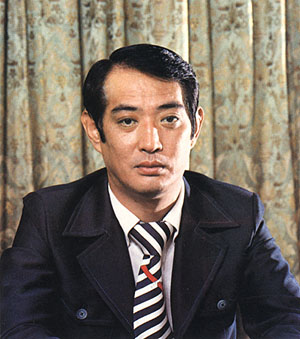 After the big hit of Space Battleship Yamato, what action did the producer take to make Farewell to Yamato? Here we look back on the entire process from conception to completion and unveil the untold story.

First, I intended to Present the End of Yamato…

When the idea for Farewell originally came into my head, a certain image became the starting point. The image is the last scene of the film, in which Yamato is quietly drawn into the darkness of space. That backward notion somehow emerged when I decided to make a sequel, several days before the Yamato success party on November 15, 1977. Of course, at that stage there was nothing else to it, not even the story. But my decision was made: “I will present the end of Yamato!” and production of the sequel began.

When the work of creating the second Yamato story started, I referred to it as an “inverse operation” since we would be working backward from the end, which was clearly decided. The next thought was how to reach that outcome, and how the first story would continue into the second. Also, the theme had to surpass that of the previous work.

The young character Kodai traveled to Iscandar to save Earth from a crisis. He grew in maturity while suffering in his fight for a great purpose. The result of this growth drama was that he learned to “love all others,” including the enemy. This realization was to lead to a deeper understanding, but this part of the story was subject to time limitations so I was unsatisfied with it. If the sequel was to be an extension of the previous work, it would have to carry on that particular point.

What specifically does it mean to “love?” Thinking deeply about it, there is the love for an individual and the love for mankind. Furthermore, I thought that expanding that love to all of space would make for a sufficient drama in which to depict “the end of Yamato.” This, and “the practice of love.” By the end of November it was clear that Yamato‘s orbit followed these two basic directions, so to speak.

I quickly gathered Leiji Matsumoto, Toshio Masuda, and the main staff to absorb my thoughts and work out an overall design day after day until the end of the year. By December 28, Mr. Masuda and I boiled it down and summarized each plot idea into a definitive plan. That became the “Toshio Masuda Draft” that was finished on January 5, 1978. With this, the framework for our story was completed. [Read about the entire development process here.] 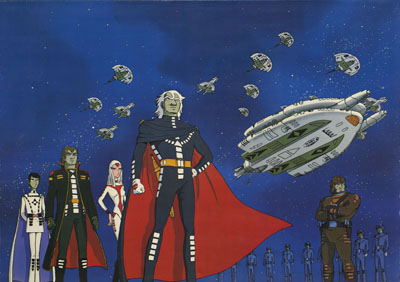 Great Energy Was Poured Into the
Idea of the White Comet!

In the previous work, there was a character named Dessler who overflowed with charisma even though he was a villain, and who gave a strong accent to the story. The same is true of any general entertainment movie; no matter how good the theme and ideas are, the story isn’t as much fun if the enemy is not thoroughly developed. Isn’t the greatest part of creating entertainment the chance to show what you can come up with for the villain?

Actually, the concept for the enemy required the hardest thinking this time: the White Comet, the Imperial City and the Giant Battleship, and Teresa, the symbol of “space love.” Between myself, Mr. Matsumoto and the others on the staff, ideas for all of these piled up from repeated discussions. Because we took more time than was required to develop these thoughts, it placed limits on the illustration work that followed.

I regret that, but I still think that every concept had to reach final approval by Mr. Matsumoto and myself in order for us to perfectly set the direction for the enemy. It was the basic design of the White Comet that particularly concerned me above all else. It is an important setting that could be considered the symbol of the enemy, and was like a main character in the story. Those who saw the movie would have to understand that the Comet Empire was an artificial celestial body beyond all imagination. 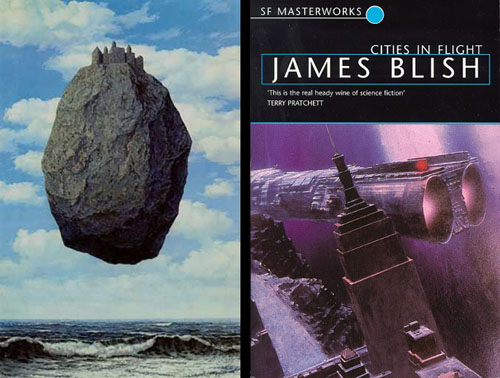 The first notion of this was a fortress of absolute power carrying an imperial city that was home to a belligerent race of spacefaring people. The examples that inspired us were the surrealist painting Castle of the Pyrenees by Rene Magritte, and the SF novel Cities in Flight by James Blish in which the skyscrapers of New York City become a spaceship.

Furthermore, the Comet’s theme music would be performed on a pipe organ. That was inspired by a scene in a movie I’d seen 20 years ago. I wanted to use music to give the impression of the Comet’s mass and weight, something more than even the full orchestra of 70-80 people from our previous work could manage!

While trying to figure out how this could be expressed in a single note on any instrument, I suddenly remembered that American movie from 20 years ago: 20,000 Leagues Under the Sea starring James Mason, the film adaptation of Jules Verne’s masterpiece. There was a scene in which Captain Nemo plays a pipe organ as an expression of his agony. This was the only scene I particularly remembered, because it was the first use of a pipe organ in a movie. Needless to say, the film was highly acclaimed even for its music. I remembered this and wondered if I could use a pipe organ for the White Comet. So I did. 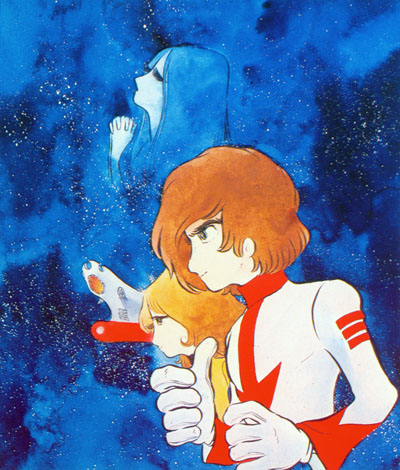 Looking Back on the Sequel…

When the first film became a hit, various reviews were sent to me. I didn’t think much about the criticism when it claimed the movie was a “rehash of TV,” but there was also the critique that it was a “fluke.” I found the word to be unbearable.

This was another reason I made up my mind to do a sequel, and when I look back I can’t deny that it was rooted in my desire for a backlash against the criticism. I didn’t behave that way around the staff, but the feeling went all the way to the bottom of my heart. The passion for Yamato allowed the staff to endure my relentless demands to achieve the impossible. Their passion grew to an unusual obsession that permeated the entire production.

We were fortunate to get a reaction that exceeded that of the previous work. It was a joy to produce something that received so much passionate support from young people, and no one on the production would have traded this joy for anything.

I must admit that there are some regrets, such as final retakes that could not be done, but overall it met my demands fully. In that sense this is my most confident labor of love, as good as, or better than the first one.

1980 Essay on the making of The New Voyage