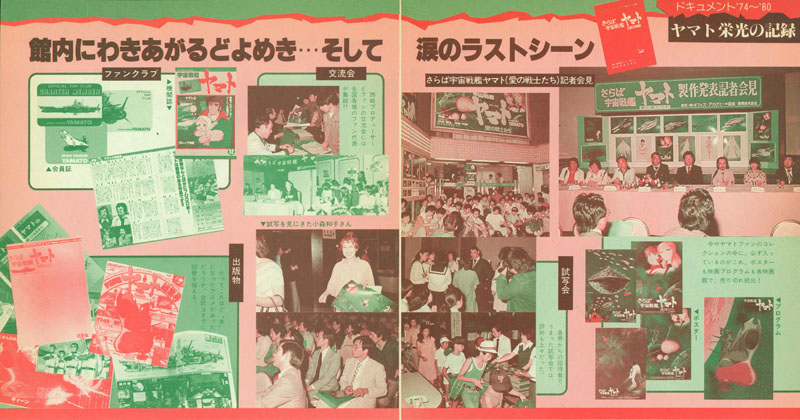 The Production of Farewell to Yamato is Publicly Announced; The Day Yamato Launched Again

“We will make a new Yamato next year.” This announcement by Producer Nishizaki was enthusiastically received by the fans [in November, 1977]. At that time, reruns of the first TV series were restricted to local networks and the first feature film was no longer in theaters. The announcement, therefore, transformed the fans’ frustration into expectations for a new Yamato.

They decided to make Yamato part II as a new feature film, which would be co-produced by Office Academy and Toei Pictures. The title had already been chosen: Farewell to Space Battleship Yamato, Soldiers of Love. At the beginning of 1978, Nishizaki and his staff headed to Hawaii for meetings. The fans heated up and started gathering information about the new launch. “Are there any new mecha?” “Are there any new characters?” Their attention was focused on each new issue of the Yamato Fan Club’s official magazine.

The production team set up a staff room at Toei and began production. The sign “No admittance except for staff” was hung on the door. The core staff members were Director Noboru Ishiguro and Assistant Director Kazunori Tanahashi — both of whom had worked on the previous Yamato — and new personnel from Toei: Animation Director Tomoharu Katsumata and Art Director Tomonori Kogawa. Prominent figures gathered together from across the anime industry.

When the opening day of Farewell to Yamato was finally announced, fans started gathering in front of the theaters.

The Last Scene Was Unforgettable; Kodai’s last words made the audience cry

On August 5, 1978, (actually, the night before) fans had already lined up in front of theatres in the Toei chain. They actually outnumbered the fans at the opening night of the first Yamato film one year earlier. This was especially true for theaters at Shibuya, Shinjuku, and the west exit of Yokohama station, where there were more moviegoers than seats. Those fans were ready to wait for several hours or even several days if necessary. Animage, an animation magazine published at that time covered the action. It was surely the summer of “Yamato Fever”.

The moment the movie began and the title appeared on screen, some audience members were already weeping, probably anticipating the tragic ending suggested by the movie’s name. Every time Kodai, Shima, Sanada, and Yamamoto, those beloved characters appeared in close-ups onscreen, a mixture of sighs and sobs swept through the audience. The movie simply flew by and reached its final scene. The theater was filled with tears for Kodai, who alone steered Yamato against the menacing “Gatlantis” to fight for peace in the universe.

Some of the fans returned to theaters three and five times and created the groundswell for organizing new fan clubs.

There is a popular belief that a sequel cannot surpass the original. Farewell defied this. The opinion even arose among some fans that the Yamato series should be brought to an end with Farewell, which further attested to the huge success of the movie. 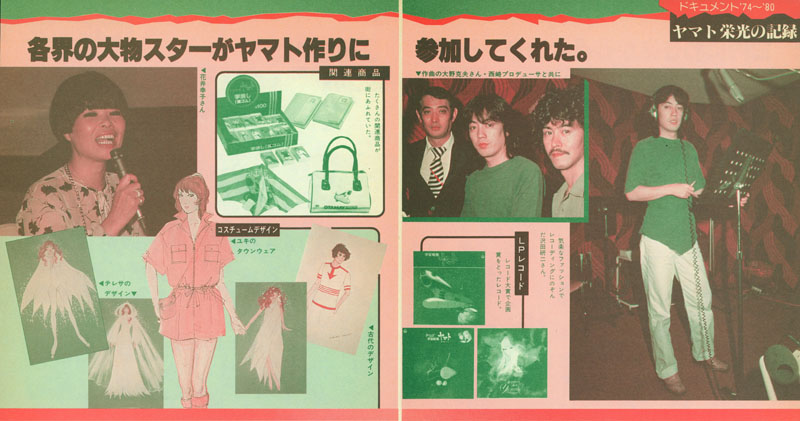 Big Stars from Every Field Participated in the Making of Yamato

Who sings the ending theme of Farewell? It’s Julie…!!

Farewell to Yamato became a great success, gathering a far larger audience than anyone anticipated and setting a new box-office record. Among the many factors that contributed to its success was its theme song. It was sung by one of the leading pop stars of the time, Kenji Sawada [who also went by the stage name “Julie”].

Producer Nishizaki had been racking his brain day and night over how to make Farewell more sensational. The main theme [of the TV series] sung by Isao Sasaki was indispensable…but there was no reason Nishizaki couldn’t get a big star to sing the ending theme! After a search for a suitable person, he singled out Kenji Sawada. His agency, Watanabe productions, readily accepted the offer.

Hiroshi Miyagawa and Katsuo Ono competed to offer many songs to Julie for the ending theme. Mr. Nishizaki decided on Ono’s version. This was the only instance of a Miyagawa composition being rejected from Yamato.

On the rainy day of June 23, 1978, the recording was made at Sound City Studio. Nishizaki began the day with firm handshakes with both Julie and Mr. Ono. An elaborate briefing followed. Several fast-paced rehearsals took place, and then the final take.

Yamato‘s Social Impact was more than one could imagine!

What surprised the media no less than the involvement of Kenji Sawada was the employment of a professional costume designer, Yukiko Hanai. This was also Nishizaki’s idea. Usually, it is the job of a director to design the characters’ costumes whether male or female, but Nishizaki was not satisfied with that this time, so he made the offer to Ms. Hanai.

At first, she was to take up only Teresa’s costumes, but she ended up designing Yuki’s costumes and also a T-shirt for Kodai. She prepared three designs for Teresa; a miniskirt, a long skirt, and another at medium length. She designed them based on Teresa’s nymphal image. Hanai’s own favorite was the third one: “I like it, for it looks short and long at the same time.” [Note: it was ultimately decided that Teresa would have no costume.]

Yuki’s costume was designed to be casual. As Ms. Hanai said, “I tried to make it look like modern girls you see everywhere.” She avoided anything fanciful and did not care if it clashed with highly mechanized settings. At any rate, it was the first time a professional costume designer was employed for an animation production.

By this time, it seemed that the Yamato boom had become a social phenomenon no one could ignore. School supplies and backpacks with Yamato on them were everywhere. Elementary school kids, college students, and even office girls could not do without Yamato. It had become a household name. 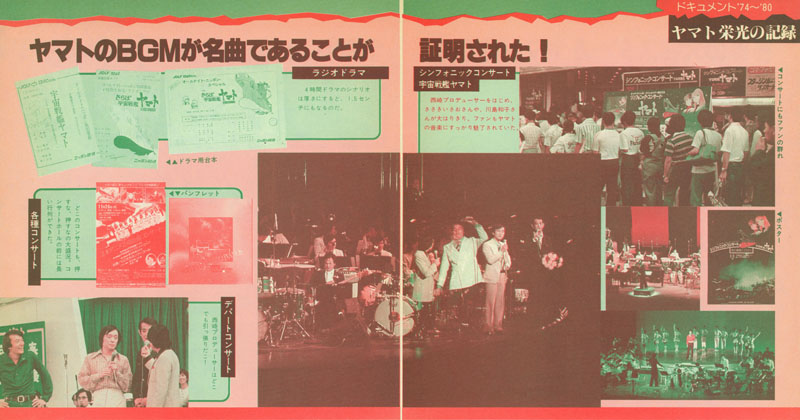 The Yamato BGM is Proven to be a Classic!

Have you ever known an anime whose music stands on its own!?

Animation, of course, consists of both picture and sound. But if we consider the music of Yamato apart from its picture, it is still a great work. Yamato was the first anime production to be accompanied by a full orchestral suite, though some anime had already used synthesizers. That fabulous opening theme as well as the lyrical ending theme The Scarlet Scarf had become genuine hits on their own merits.

On July 29 and 30, 1978, a Yamato Concert was held at the Koma Theater in Shinjuku, Tokyo. It was performed by the New Japan Philharmonic Orchestra with Tetsuo Hara & Sharp and Flats. The Symphonic Concert was organized in two parts. The first part was the Space Battleship Yamato Symphonic Suite and the second part was Farewell to Yamato.

The orchestra was conducted, of course, by Hiroshi Miyagawa. In addition, Yoshinobu Nishizaki, Leiji Matsumoto, and director Toshio Masuda appeared onstage together for a brief talk show. The fans must have had a great time listening to the music of Yamato as well as behind-the-scenes stories.

Like this concert, the popularity of Yamato music went far beyond the screen. One student in a school of music developed it into a suite for piano. In 1978 and 1979, the main theme of Yamato was performed by cheerleaders at the Koshien baseball stadium. It is not an exaggeration to say that it was not only the theme for the anime, but a standard for all of Japan. In any case, we wish to draw your attention once again to the great achievement of Mr. Miyagawa!

The Symphonic Concert was part of the radio program All Night Nippon of Japan Broadcasting. [Note: this was a very popular and long-running midnight talk show for young listeners.] That was why such big name radio personalities as Yasuhiro Saito and Akinobu Kamebuchi were the MCs of the concert.

Nippon Broadcating eagerly backed the promotion of Yamato. They added “Yamato Corner” to All Night Nippon, and also produced live 4-hour radio plays of Space Battleship Yamato and Farewell to Yamato. Fans listened intently to the voices of Kei Toyama (Kodai), Yoko Asagami (Yuki), and Hideo Nakamura (Shima) from 1 a.m. straight through to 5 a.m. Nishizaki personally appeared in “Yamato corner” every week to give detailed answers to every question the fans asked. We can see from this how hardworking he was at that time.

Yamato concerts were held many times by various organizations, and were very crowded every time. Hiroshi Miyagawa and Isao Sasaki never declined to appear at these for sake of the fans. Mr. Nishizaki was so devoted that he even appeared at smaller concerts held in department stores. Everything in his schedule was worked out to the minute. He rushed from place to place for the sake of Yamato and for the sake of love. It was his enthusiasm that made Yamato bear its full fruit.