If you’re in the habit of browsing our ever-lengthening Links page, you already know that the internet bursts at the seams with Star Blazers and Space Battleship Yamato content. If you’ve looked at that page and backed away in terror at the sheer magnitude of it all, you can be forgiven. It’s hard to know where to begin.

It is for you that this page exists–to highlight some of the more noteworthy artifacts that have emerged on YouTube, either directly related to Yamato or inspired by it. After you’ve digested these, we hope you’ll find yourself fortified and ready to explore the rest of our Links collection, since there’s a lot more that can’t be found on YouTube.

Also, we encourage you to share your own Star Blazers and Yamato finds with us! You can email them to us by clicking the ‘Contact’ link in the banner above.

The real value of the MV Series is the opportunity to enjoy the essence of the story apart from the linear scene-by-scene narrative. The MVs are also extremely rare, since they were released only once on VHS and LD–so whoever took the time to post them did the rest of us a huge favor. Read about the making of the MV Series here.

Yamato parodies first began to appear in doujinshi [fanzines] published shortly after the first broadcast of Series 1 and propagated along with its popularity. Many years later, a Japanese comedy/variety show named Adventures of the Laughing Dog unleashed these wicked sketches that showed that even an intergalactic despot can’t escape the slings and arrows of everyday life.

Special thanks to superfan Edward Hawkins for posting these. Visit his Yamato site here. 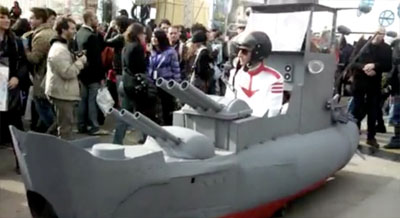 Italy’s Lucca Comics/Animation Convention is one of the biggest of its kind in the world, attracting enough cosplayers to rival anything in Japan. When they go all out, amazing things happen — like this mobile Yamato at the October 2010 event. Watch Kodai and Okita “suit up” in two clips: 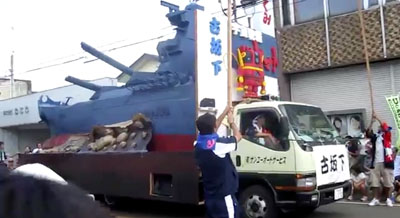 It may not look like much in this still, but the Yamato float built for the 2011 Autumn Festival in Aizubange (a town in Fukushima prefecture) is full of surprises. And look closely at the dancers, too. 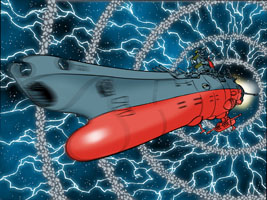 Star Blazers Rebirth was a webcomic serialized here from 2005-2007, based on early story material developed for Yamato Resurrection (which was brought back into production in 2008). With our blessing, superfan Josh Lambright turned the first ten chapters into “YouTube comics” enhanced with original Yamato music.

See them all here and read them in their original format here.

One thought on “The Best of Yamato on YouTube”