2010 saw more Space Battleship Yamato activity than most years, especially in the second half when promotion for the live-action movie picked up in a big way. Click here to follow that record, and click here to see what went on with Yamato Resurrection.

This report continues from the first half of the year and focuses on all the activity dedicated to the Yamato franchise in general.

“Otaku Award R7” is the name of a special-interest group that meets periodically in Tokyo to do what Otaku do best: talk about their interests. They hold small-scale talk-show events for similarly-minded fans on a variety of topics several times a year. On the evening of July 17, a handful of big-name fans came together under the banner of “Men of Yamato” at ‘Loft One’ in Shinjuku. Friend-of-this-website Gwyn Campbell was there and submitted this firsthand account:

‘Loft One’ has specialized in holding talk-shows for several years. Unfortunately, they have a stringent no-photography policy, so I couldn’t get pics of the hosts were on stage. Our host for the evening was Otaku Awards regular Ryoda Fujitsu, along with guests Ryusuke Hikawa (anime academic and freelance writer) and Shoji Harahachi (modeler). The talk lasted around four hours and was one big trip down memory lane for the Yamato faithful. A 10-minute slide show called Yamato for New Recruits introduced the series and movies. Harahachi then made a few comments about the first generation of Yamato models and how kits from the 70s still seemed better to him than the majority of kits from the 80s.

This lead into the main event, a screenshot-by-screenshot examination of all the series/movies accompanied by commentary from the guests. As you can well imagine, this went on for hours, yet didn’t seem to drag at all. The guests were intent on playing up as many discrepancies as they could find for laughs, interspersed with some personal observations.

-Hidden meaning behind the shape of the Wave-Motion Gun: while originally conceived as round, it ended up being a hexagon. Fujitsu felt there was probably some sort of imaginary or scientific reason for this change. It was agreed that the hexagon made the gun stand out more, almost a character unto itself.

-Even though the Black Tigers/Cosmo Tigers launch toward the ship’s stern, it’s hard to tell this in some shots. As a result, a lot of people mistakenly think they launch forward, even today.

-Original theatrical poster: why on earth is the Earth behind Yamato blue?

-The Black Tigers’ namesake was not the snake but rather an actual black tiger. This name was apparently also used by some units during WW2.

-The memorable ‘Warp Effect’ was achieved by moving a sheet of warped glass around over the cell. This is a technique that has since been lost since it can’t be recreated digitally.

-Why do Matsumoto’s guns and missiles all look rather phallic?

-WHY is there an entry hatch in the front of the Gamilas drill missile?

-How is it that whenever Yamato launches, it passes all the planets in order? Either it’s secretly zig-zagging throughout the solar system, or it has a very limited launch window!

-At the end of Farewell to Yamato, why is Shima’s ‘ghost’ on the bridge even though he didn’t die?!?

After all the series/movies had been thoroughly examined, each guest showed their favourite clips. Finally, they spoke of their hopes for the future of Yamato and where it might go from here. Overall it was a low-key yet enjoyable night full of laughs and nostalgia for all while hinting at better things yet to come.

Game company Taito has been a steady Yamato licensor since 2007, creating various products for the UFO Catcher-type arcade games in Taito arcades. In 2010, they moved into the realm of personal electronics starting with this 4.75″ 1Gb USB stick. The engine pulls off to reveal the key. The ship is a scaled-down version of Taito’s much larger Super Mechanics Yamato toy.

Taito’s next product was this Analyzer stereo speaker that could plug into a computer or MP3 player and broadcast sound through his large eye-meters. Standing just under six inches, the body sculpt is a very close match to the Liberty Planet toy released in 2006.

Space Battleship Yamato: The Origin was the name of this special presentation from network provider Softbank in which subscribers could, for a mere 840 yen, receive a 90-minute Flash animation clip on their cel phones every day for four weeks. Over time, it added up to a 40-minute version of the Yamato movie.

Training for the Star Force is a lifelong discipline, so the sooner it starts the better. Babies and toddlers could do so in Kodai’s uniform when Bandai released it as a onesie on August 20. The Yuki version followed a month later. And yes, both come with guns. 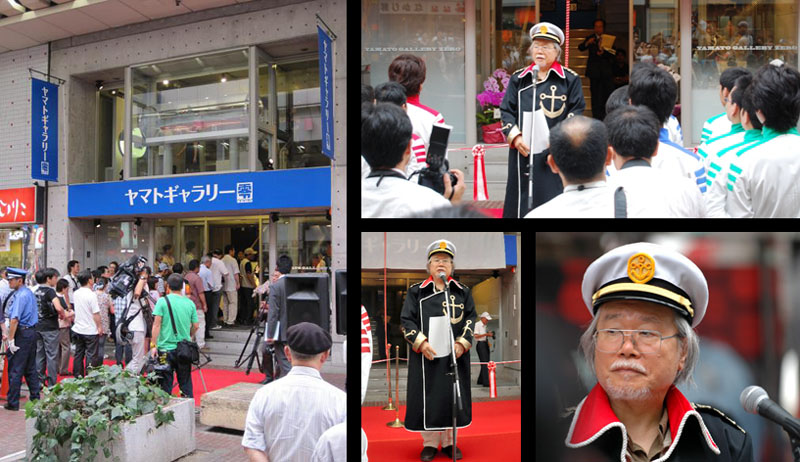 Kure, Japan, has a special place in Yamato history, since the original IJN battleship was built at its naval yards. Now it is home to the Battleship Yamato museum, which was profiled here in our first Yamatour travelogue. At the end of August, all the display items in the Leiji Matsumoto pavilion were moved to a new home just around the corner: Yamato Gallery Zero.

Matsumoto himself opened the 4-floor gallery in full captain’s regalia, supported by uniformed crew. So far, this is the closest thing Japan has to a Leiji Matsumoto museum, complete with a gift shop. Attendees received a “welcome” pack that included a biographical booklet of the man himself. See it from cover to cover (along with some merchandise images) here. Visit the gallery’s homepage here. 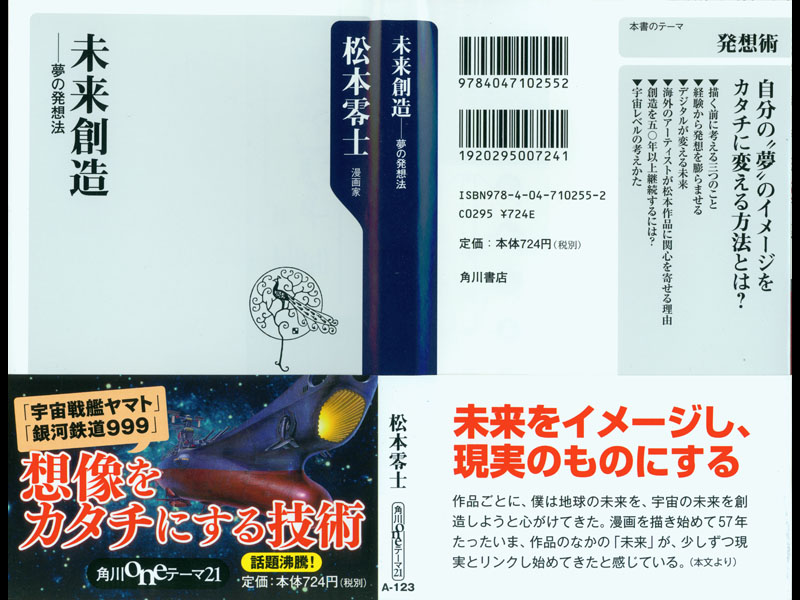 With the live-action movie on the horizon, Leiji Matsumoto began a personal campaign to remind the world of his critical role in the making of the original. This 199-page paperback was the first step, part biography and part creative thesis about his approach to storytelling and design for all manner of projects.

Some new English-language Yamato books were published–sort of–and became available online in mid-September. Alphascript, Betascript, and Books LLC all fall under the category of “wikibooks,” a reversal of the digital revolution in which content from Wikipedia migrates to the printed page. Based on the text content, this looks to be a purely automated process (probably printed-to-order like a vanity press) in which online text is dumped wholesale, URL’s and all, onto paper with no editing or re-formatting. So yes, you can save your money and just visit Wikipedia if you like. But if Wikipedia ever disappears, we appear to be safe.

Cospa is THE place to go in Japan for anime-oriented apparel. They constantly roll out custom-designed t-shirts, jackets, caps, personal accessories, and much more for anime titles new and old. This year Yamato costumes joined the lineup with Kodai and Dessler in September and Yuki following in late December.

See a photo gallery of these costumes here. 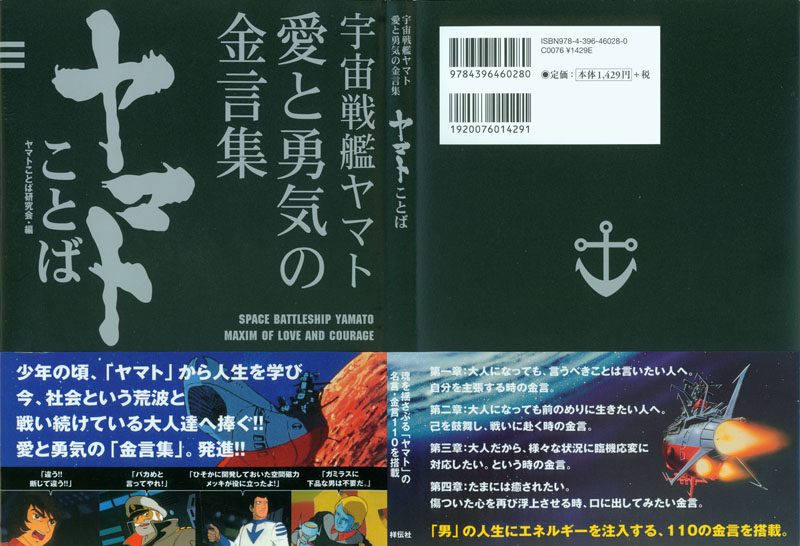 Early October is always a good time to be a Yamato fan, since October 6 marks the anniversary of the original TV series. This interesting 127-page book arrived on that day, an overview of the entire saga as described through its most memorable lines of dialogue coupled with full-color stills.

Captain Okita’s plaque from Farewell to Yamato has been modeled many times over the years, but this handsome version from high-end toy/model company Aoshima was one of the best and biggest, standing nearly 12″ tall and molded in highly-durable polystone

According to the website Hear Japan, WCDA is a DJ/remix/vocal/design unit who create House Music, Electronica, and Progressive House. The name is an abbreviation for “Will Cinderella Dance Again?” The group have in recent years played a large part in pushing Dance/Techno-influenced J-Pop styles closer to an authentic club sound. They often do remixes for popular anime titles

In September 2009, they covered the Iscandar theme as a 2-track maxi single and followed up about a year later with the Bolar theme from Series 3. Happily for American fans, both of these unique releases can be found on iTunes. (Recommended!)

This event (celebrating its 50th gathering) was the first opportunity most fans had to get a close look at the forthcoming 1/500 Yamato model kit from Bandai, and it created quite a stir among the blogging community. The kit was released on December 4 and is shown later in this report. 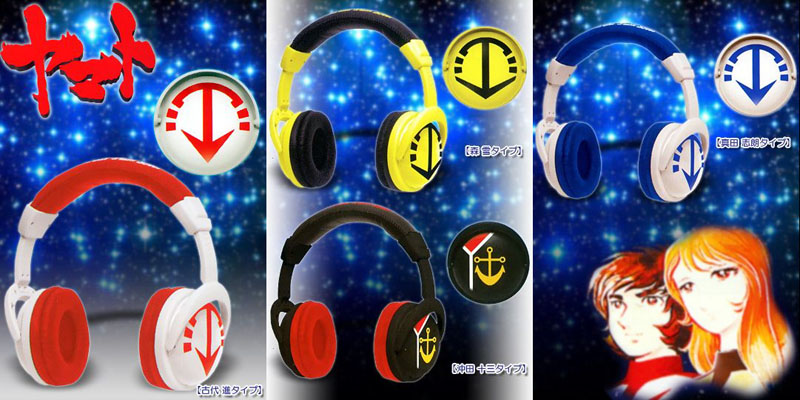 Taito’s next release was this set of four stereo headphones, customized for Kodai, Yuki, Captain Okita, and Sanada.

This blast from the past was the first “concept album” featuring Yamato tracks, an all-synthesizer collection. Five of the ten tracks on Space Fantasy were Yamato covers, and the opening track on Space Fantasy Live followed suit. Originally released all the way back in April, 1978, this was the first time For Life Music released either album on CD.

Read a description of the album here.

Another member of the Yamato voice cast was lost at the end of October. Nachi Nozawa, who portrayed Dark Nebula Empire Lt. Alphon in Be Forever died of lung cancer on October 31. Known for cool heroes such as Space Cobra and the very first Lupin III (pilot film), he also popped up in other Leiji Matsumoto anime such as Queen Millennia and Galaxy Railways. In addition, he had an active live-action dubbing career which included roles as diverse as C-3PO and Bruce Willis (in the Die Hard movies).

See a video retrospective on his radio career here. 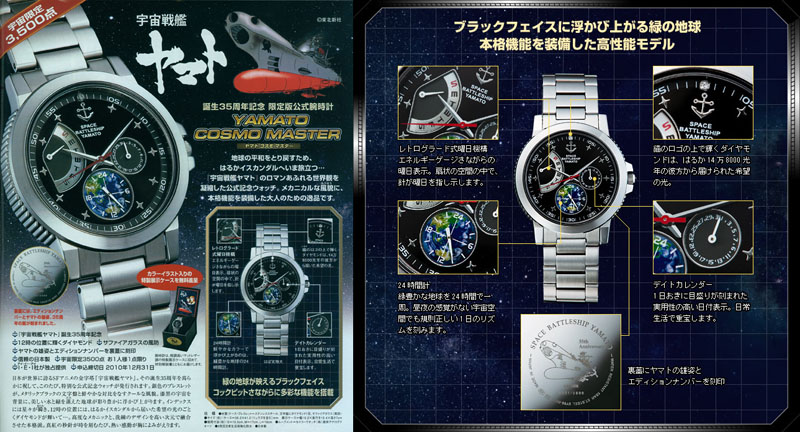 The name “Imperial Enterprises” first showed up in relation to Yamato back in June with their release of the 35th anniversary coins issued by the nation of Tuvalu. The impressive Cosmo Master wristwatch marked them as a purveyor of high-end collectibles. Limited to just 3,500 pieces, it checks in north of $600 US.

Yoshinobu Nishizaki, Executive Producer and Creator of Space Battleship Yamato, died on November 7, 2010, by accidental drowning. He was 75. Tokyograph.com reported the news within hours of his passing, as did all the other major news outlets in Japan:

At around 12:35pm on November 7, the Coast Guard received word that Nishizaki had fallen into the water from a ship named Yamato (485 tons), while it was docked at Futami Harbor of Chichi-jima (part of the Bonin Islands). A rescue boat was able to retrieve him about 20 minutes later, but he died shortly after that.

Yamato had docked at Futami Harbor the night before. On the morning of the accident, the ship had completed a trial voyage within the harbor. Nishizaki was wearing a wetsuit and was apparently preparing for a dive at the time that he fell from the ship.

An ignoble end to a remarkable life. The best that can be said about it was that, like the man himself, it was extremely unusual.

This is the opening segment of our tribute to Mr. Nishizaki, which includes his final essay and can be read in full here. 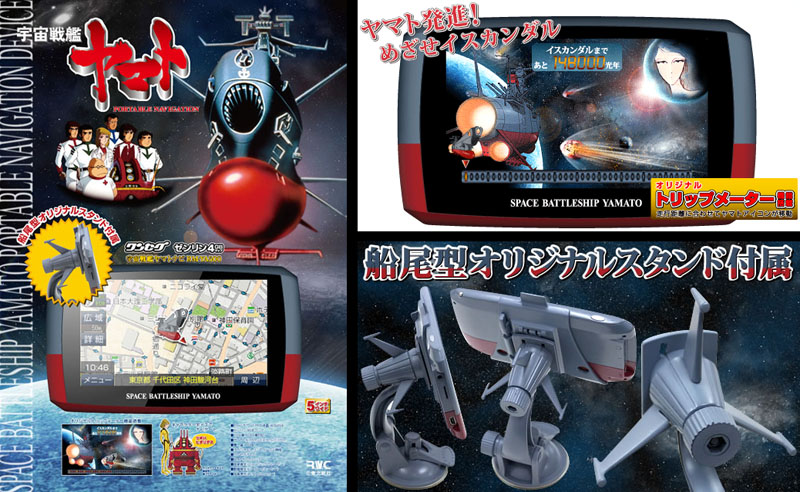 With hundreds (probably thousands) of Yamato products already made, it takes a lot of innovation to come up with one nobody’s ever seen before. This Yamato-themed GPS navigator by RWC definitely fits into that category. The 5-inch wide color screen provides numerous features, the most basic of which is an interactive map featuring Yamato as your car’s icon and voice commands from Yuki and Analyzer, both of whom sound completely authentic.