The Adventures of Anton Kholodov

Anton’s itinerary from Tomsk, Siberia to Tokyo, Japan was an ambitious one in 2010. Because of travel restrictions, he could only go from the start to the end of a calendar month, so being in Tokyo for the December 1 premiere of the Yamato movie was made much easier by spending two consecutive months there. Thus, he arrived at the end of October and left at the end of December.

As described in the first installment of Yamatour 2010, this allowed him to attend both a “World of Leiji Matsumoto” exhibit and to see the new movie in a special preview on November 1. This also meant that he stayed on for the almost the entire month of December and attended some additional events. So without further ado, Anton takes the stage…

It was a good day.

Despite December’s bad weather in Tokyo (clouds, rain, strong wind) that day was warm and peaceful.

I went to a Memorial Hall in Shibuya that was quite near the Yamato Prop Exhibition at Akasaka where I was before. Such a coincidence.

The first thing I saw was a Space Battleship Yamato model in front of the main entrance, as if the ship itself came to say goodbye to its creator. It was the same 3-meter model I saw in Aeon Laketown’s exhibition the year before, and I think it was quite difficult to bring it here.

All hands were at battle stations. I met the crew from Yamato Party and they treated me very well (again, I was the only foreigner there). I was asked not to take photos with people if possible, but the total amount of visitors was more than 100. This part of the ceremony was for Yamato Fans only, so I’m curious about the total number of visitors.

A small but very cozy inner garden was transformed into a portrait hall with Nishizaki’s photos on one side (they chose those with a marine theme) and Yamato movie posters on the other. It was a great combination of sand garden and Yamato. A true spirit of Japan, I can say.

The portraits lead to a large board almost filled with panels (shown in the first picture above) showing the names of well-wishers. They included famous members of the old production staff such as animation director Noboru Ishiguro, artist Yasuhiko Yoshikazu, and singer Isao Sasaki. There were also many names from companies that benefited from Yamato such as Bandai, Tohokushinsha, TBS, and a lot of production studios. There were even the names of fans including Yamato Party Chief Enomoto

The main hall was marvelous. A big photo of Nishizaki was surrounded by flowers with a big blue anchor in front and two plasma screens on either side. Before the ceremony all the Yamato launch scenes (including the 2009 movie) were looped on the screens. Everyone who wanted to pay respect could take a white rose (plastic, unfortunately) and place it before the portrait (I did so).

Finally, the ceremony started. Mr. Enomoto stood before the microphone, and looking at Nishizaki’s portrait said: “Mr. Nishizaki, as Kodai and Yuki were the children of Captain Okita, we are your children. Thank you for creating Yamato! All crew, salute!” Everyone stood up and held a Yamato salute while the main theme was played.

Then we sat down to watch some materials on the screen. It was a biography of Mr. Nishizaki, some of his photos (a marine theme again) and parts of his interviews, then we heard his voice from the Final Yamato Memorial Symphony [1983] telling us a brief history of Yamato. The last words were in English:

“I adore the eternity of love.”

Then everyone placed white roses in front of the photo while saying some prayers or wishing the “captain” good luck in his final voyage. Everyone left the main hall but more kept coming so they held a ceremony of their own. I talked a little with the members of Yamato party and then left. The event was simultaneously really bright and really sad. Watching all the Yamato launches one after another, I thought that this was the main idea of Mr. Nishizaki: no matter how strong the crisis, you have to rise, lift off and fight for your future. He did it in his own way and we have to do the same.

“Yeaahh…this Captain Okita is MUCH better…I like it…yeah, just great…wait a minute! Do you see that?! His cap! It’s so BIG! It’s eating his head! Oh my God!” – Gwyn Campbell

I was little mad at Gwyn because he convinced me to come one hour before start time.

“I live here! I know how they do these things!”

No wonder we saw only closed doors when we arrived at Culture Culture. We didn’t have a ticket like I did one year ago, but we knew it could be bought on the day. How strong was the surprise when some guy from the staff told us that they all were already sold out! To who?!

“Don’t worry, Gwyn, we will break through!” (As I remember, Tim’s friend called this “California style,” but I prefer to call it “Russian style.”)

Fortunately they offered us a “cut ticket”: a lower price but you can’t stay on for the Talk Show. We bought it and joined a queue that just stood by the entrance not moving while everyone with a “normal” ticket walked in freely. I became sick of all this and simply entered myself, leaving Gwyn behind. (I though he would join me.)

It was a strong deja vu since nothing had changed from last year. First there was a shopping area. A pleasant one; they had old and rare stuff like papercraft books, VHS tapes, old music score books, figures, etc. The most popular item was a display with the new Yamato Great Chronicle book which was banned for normal sale because of rights issues at that moment, so fans took this chance and bought all 100 copies (not less, I think).

Some of Matsumoto’s pre-Yamato manga was also re-issued in a box set and disappeared quickly. See more of the goods that were on sale here.

During that time, the staff guy offered to let Gwyn buy a “normal” ticket. Gwyn gave me away, so I also had to buy one. But then we finally became a part of the event in every meaning. We took a table and enjoyed the signing session that had just started. I’m really sorry I didn’t record Gwyn’s comments on tape. It was more emotional than the Spanish commentary for soccer’s World Cup final match on TV!

This session was different from previous ones, since Matsumoto drew in color this time. Despite the fact that Gwyn and I found it not as good as his b/w style, it was popular.

“I’m curious why nobody asks him to draw mecha?” I asked.

“It’s too difficult, I suppose,” Gwyn replied. And right after that, Matsumoto was asked to draw a WWII striker plane “Zero!” He did it very well, so somebody got enough courage to ask for Yamato! I’ve seen a few sessions, but this was a first!

The funny thing is, Matsumoto didn’t remember the Yamato crew uniform. He faced many difficulties drawing Kodai and finished it only thanks to tips from visitors. The admiral forgot his soldiers. He was also more free in style, mixing different characters. He wanted to add a skull and crossbones to Captain Okita’s suit (“Old Harlock,” Gwyn commented) and sometimes girls from one universe became similar to another (Queen Emeraldas mixed with Yuki, etc.). That was more interesting than drawing the same pattern every time, but it seemed the other visitors didn’t wish for it.

When Matsumoto finished the signing session, he faced probably the biggest challenge in his career–everyone who bought Yamato Great Chronicle wanted his autograph. When we saw the queue we simply decided to stroll around and went outside. Gwyn left me and went on to another engagement, so I stayed alone and took over the photography from there (most of the photos above were taken by Gwyn).

After 90 minutes, I returned and saw a few people still in line. Later, the staff said it was some kind of heroic act for Matsumoto to sign all those books.

Then it was time for the Talk Show. The usual guests were Mr. Hideaki Ito (Writer), Ms. Yoko Asagami (voice actress for Yuki Mori, Kei Yuki and more), Mr. Katsumi Itabashi (mecha designer), and Mr. Keisuke Masunaga (Character design for PS games). There were also two producers; I forgot their names, but one participated in Farewell to Yamato and the other in My Youth in Arcadia.

One year ago the subject was mainly Galaxy Express 999 (30th anniversary), but this time it was about Captain Harlock. They gave a presentation of the new CG movie and a Harlock-style pachinko slot machine. They also talked a lot about My Youth in Arcadia, character appearances, etc.

By the way, while speaking about Maetel, Matsumoto said, “a few weeks ago one Russian guy told me that Maetel’s name can be translated from Russian as falling snow. Such a coincidence! But I didn’t know about it.”

He was talking about me, since I mentioned it in our private interview on December 4. But I meant not falling snow, but a blizzard (“Yukikaze” in Japanese, the name of Mamoru Kodai’s ship).

Because the signing session was so long, the talk show was limited by Culture Culture’s staff so it ended in the middle. But Matsumoto was in a bright mood and wished everyone to meet again next year.

By the way, I was curious; what does it take to be Matsumoto? During one signing session you have to draw:

Who said it’s easy to be a famous manga artist?

When placed side-by-side, the posters from 2009 and 2010 form a very impressive image. Unfortunately, they are not available for sale.

My last quest before going home was Tokyo Tower’s Yamato exhibition. I wasn’t very optimistic about it but went there anyway. I even wore my Yamato jacket.

It was a small corner on the third floor near the cafe and a few other displays. They took some character uniforms from the Akasaka exhibition and added some posters with production news. The only thing I really enjoyed was a hand-made oil painting in the old Yamato style that made me think: “They should have made another anime instead of this.” (It is shown below; click here to see it larger.)

Live action is good, but it can never compete with a warm, hand-drawn anime.

I was a little disappointed because I wore my Yamato jacket for nothing. But when I left Tokyo Tower I met strange company; Japanese Star Wars fans and cosplayers wandered around taking photos with everyone who wanted to. It was a great opportunity to get photos of Darth Vader, Anakin Skywalker, a Clone Trooper and me wearing my Kodai jacket. Sci-Fi fans from around the world, unite!

By the way, the members of that group were all fans of Yamato and had cosplayed it many times. I just missed it on that day.

That’s how my Third Yamato Quest in Tokyo ended. Good company, a beautiful city, Tokyo Tower and Yamato. That was great and worth it. And I’m sure ready to do it again someday!

Continue to Yamatour Addendum #2: The Adventures of Walter Amos!

Giant displays at the Warner Mycal theater in Itabashi, where we saw Yamato Resurrection in 2009. 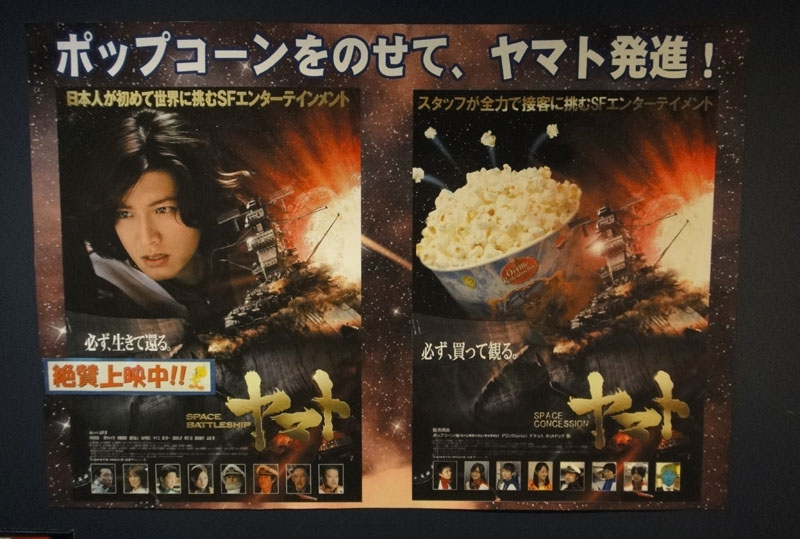 The staff made their own parody poster to advertise “Space Concession Yamato” popcorn. Compare the photos at the bottom of each.