Whereas the staff members in part 1 primarily contributed at the executive and conceptual levels, another army of hardworking craftsmen had to conceive and create the actual animation that would appear onscreen. In this second collection of interviews, we hear from those whose handiwork actually passes before our eyes: 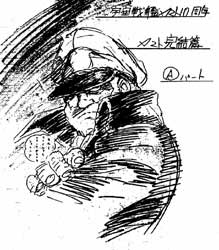 Many staff members; work was cut.

I was a chief director and in charge of the storyboards for Final Yamato. I also supervised many of the animators. This production was very elaborate in terms of its effects, and the content was much deeper than previous films. However, we did not have enough time to do everything we wanted. Therefore, I can say this work scored 80 points out of 100.

The length of the original storyboards totalled 3 hours and 30 minutes, and we had to eliminate an hour. Thirty minutes were cut during storyboard revisions, and another thirty were cut from the finished animation. We call the staff members whose work was cut “victims,” even though that sounds negative. The first “victim” was actually myself because my own storyboards were partially cut. There were “victims” in almost every stage of the production such as animation, backgrounds, and filming. For us, honestly, our hearts were broken when our work was cut at the later stages. I experienced this bitterness the most in Final Yamato.

Since January 1982 when I started, I was engaged in the production for more than one year. I feel proud of that. Although we were in a rush to finish, I was sure we’d make it. The staff members’ passion to do their best may generate new ideas for the next job. 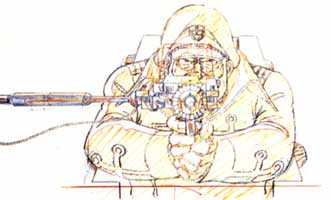 A tough schedule for Final Yamato

For me, I always wanted to make Final Yamato better because it was going to be my second production. However, the schedule was very tight. Because of this, I could not do my best. So I felt that something was missing from the finished film. Of course, it was a great effort for us to make this movie in a limited time. But I felt that the effort was not fully rewarded in the end.

I drew cels for the scene in which Okita turns on the self-destruct system. This was unusual. Usually, an animation director does not have time to draw original cels in such a tight schedule.

During the production, I often felt that we might not make the deadline. The huge efforts by the staff members to finish it on time was miraculous. 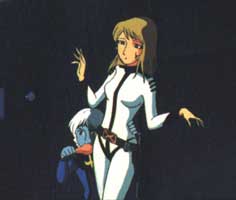 The impressive last scene of Kodai and Yuki

The hardest time I experienced while making Final Yamato was the huge number of meetings held before animation could begin. It took us a long time to reach conclusions about many matters. Therefore, I felt better once we started drawing. This time, I participated as an animation director. I was in charge of the development of characters rather than scenes, specifically Yuki and the Dinguil boy. Although there were not many scenes of the boy, there were a lot of scenes of Yuki, as usual. The cels from the last scene of Kodai and Yuki were the most impressive for me. This was the last Yamato, so we were all very enthusiastic. However, I felt that something was missing. Therefore, the sense of achievement was not as big as I had thought. It is hard for me to separate from the staff members with whom I worked, even more than saying goodbye to Yamato. I feel sad thinking that we will be parted after this. 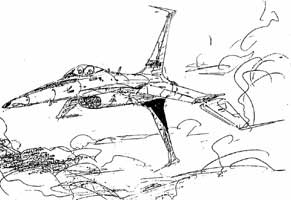 I felt relieved to finish this work.

This was a very hard task. I just wanted to finish it and go home. I was also involved in another project, Harmagedon, so I wasn’t able to enjoy the end of the year, or the new year’s holiday. I regret that now. All I looked forward to was supper every night. The fact that supper was the only treat makes me feel sad. We finally reached the finale of Yamato. So many things happened. Now I just feel relieved because we were able to finish it. Thank you. 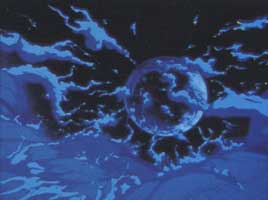 A Spectacular ending for Yamato

We started the animation of Final Yamato after the new year [early 1983]. I ended up devoting myself to the work until just before the release of the movie. My scenes were a challenge because of their scale and spectacle. Among the scenes I directed were the waters of Aquarius and the scene of Yamato sinking. Believe it or not, 25 staff members were involved in making those scenes. Each individual could only finish two original cels per day. Although we worked until midnight every night, we never had enough time. We had to get help from other production companies because it was impossible to finish it with only our staff. Looking back, I had never spent that much time just for one scene.

The climax was the most important scene, the end of Yamato. Therefore, we all did our best to make it the best. Although we had lots of difficulty in making this movie, that made it unforgettable.

The schedule for Final Yamato was very hard. I was proud to be able to manage it. 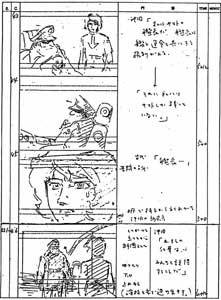 Too busy. No days off.

I was in charge of part of the storyboards and drawing some cels. My part began with the scenes of Okita and Kodai and ended with the last scene in which the crew leaves Yamato. Because it was a climactic scene, the staff meeting for it took a long time. My original plan was just to do storyboards. I was not planning to draw cels, but in the end I had to do it for the scenes I storyboarded. Those were some tough scenes. If I had known I would be animating them, I would have made the storyboards easier.

Last year [late 1982], the staff was occupied with storyboard revision meetings. Consequently, we did not have much time to work on the animation. In the end, there were only two and half months left to draw the cels. The animators must have been really busy. I was too busy to take off Sundays, let alone the New Year holidays. Even though we had such a tight schedule, we somehow managed it. Looking back, I feel it was a miracle.

After seeing Final Yamato, I felt it was not as good as it could be. With more time, it would have been a much better work. I regret that. 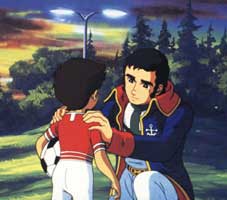 The tremendous spark of a space battle

What is most impressive in Final Yamato are the spectacular space battles. The visuals for the attacks and explosions were breathtaking. But personally, I feel that the battle scenes were emphasized too much and the human drama was weakened. For instance, in the beginning of the movie, Kodai’s pain should have described more clearly. He lost most of his friends in the battle and decided to resign his position as a captain due to the gravity of the responsibility. Therefore, I think his pain is closely related to human nature. If we had focused more on this point, it would have turned out to be a greater movie.

I have always felt, after all, that animation is the fine outcome of teamwork. In this sense, this movie made me think about many things. 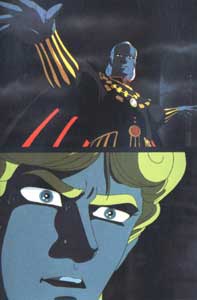 My long-cherished dream to work on Yamato came true

This was my first participation in a Yamato production. Ten years ago, when I first watched the Yamato TV series, I was amazed by the idea of a flying ship. Through my friend, Mr. Udagawa, I got the opportunity to join the staff of Final Yamato. The scenes I worked on were between Lugarl and his son, Lugarl II. Although it was my first time on a Matsumoto story, I had no difficulty. I was lucky enough to have the task of animating the main characters of the enemy side, but there wasn’t enough time in the end for me to handle them all myself. I truly regret that, especially since I could not draw Lugarl and Lugarl II for their climactic scene.

The battleship Yamato was thought of as a tragic hero in Japan. In other words, it had a dark image in Japanese history. Therefore, Mr. Nishizaki’s idea of Yamato flying through space was a big surprise to me. I was fortunate enough to join the last work of Yamato.

Currently, I am involved in the production of the TV series Ippatsu man. I would like to continue producing animation that will please the fans. 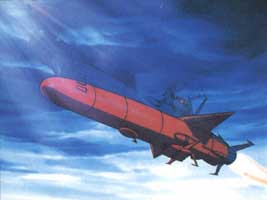 The last dash made this movie possible.

In my case, although I drew original cels, I was something like an assistant and not a full participant. The scenes I made were scattered. One time, I drew the inside of Yamato. Another time, I drew the outside. There was no consistency in the scenes I made. As usual, it was hard to finish the work by the due date, although I did not experience any big difficulty. Normally, we animators tend to take our time. Therefore, when we have to rush, we always feel pain.

When I participated in TV series, I was able to take my time. But even so, I had to finish one episode per week, so it was still hard. There are both positive and negative aspects in TV and movie production. It would be ideal if we could always overcome the negative points, but it is difficult. In most cases, the work turns out to be an imperfect combustion. I regret that very much.

I regret that I could not devote all my energy to Final Yamato because I had other projects. Now, I am involved in new ones. I participated in some of them as a chief director. My ultimate wish is to participate in a production from beginning to end. In the case of a TV series, I would like to be fully involved from the beginning and make an excellent show. This is what I am thinking now. 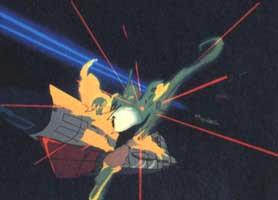 I created the battle scenes near Pluto

I’ve had many opportunities to do battle scenes for works by Mr. Matsumoto. In Final Yamato, I was in charge of the battle scenes as usual. The scenes I did were the one in which Yamato‘s convoy is defeated by the enemy, Kodai and Yuki are surprised by that, and Yamato finds and destroys the enemy’s aircraft carriers. I think the battle occurred near Pluto and it lasted about 15 minutes. It was a very violent battle scene.

My opinion of the film is that it was not as tearful as I’d thought, despite the ending. It was an exciting movie instead.

In my case, when I create cels, I usually do not read the script that much. In Yamato, lots of visual effects were used. Therefore, it was difficult to predict how my cels would fit into the whole movie, so I wanted to focus more on each scene rather than the overall story.

This is not really a “behind the scenes” story, but there was a point when all the storyboards for my segment were changed. Creating cels without clear storyboard images was pretty tough for me.

Regardless of the fact that I was working on the last Yamato, I did not feel that it would be the end. But somehow, we all came the the end of it. I will be pleased if you enjoy this movie.