In addition to its powerful impact on the art of animation in Japan, the Yamato series also served as both a proving ground and a launching pad for many artists and writers who moved on to successful careers that continue to this day. One of the most prolific of those graduates from “Yamato Academy” is the virtuoso manga artist and animation director/designer Yasuhiko Yoshikazu.

Known as “Yas” for short, his popularity exploded in the 1980s with such anime classics as Mobile Suit Gundam, Crusher Joe, Arion, Venus Wars, and Giant Gorg. Today, his still-groundbreaking manga work can be found on the shelves of American comic book stores. This interview with “Yas” was originally published in 1983, shortly after the theatrical releases of Final Yamato and Crusher Joe.

What parts of the Yamato series did you work on?

I did 12 or 13 storyboards, starting with episode 6 of the first series (the “Titan” episode). After that, I was asked to work on storyboards for Farewell to Yamato, and the last 80 scenes of the movie. Then they wanted me on the TV version of Farewell, which was called Yamato 2, so I ended up working on at least half of those episodes.

So you did story concepts as well?

That’s correct. I met with Hideaki Yamamoto and Keisuke Fujikawa (writers). Although they wanted to put my name in the credits for the Staff, I asked them not to. And I was about to leave the Yamato project altogether when they persuaded me to work on the storyboards and 20~30 scenes for the TV special The New Voyage. 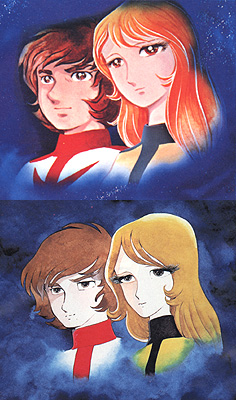 How did you get involved with Yamato in the first place?

I was recommended by Mr. Nozaki on the production staff. At the time I thought the job would go to Noboru Ishiguro instead. But when I met up with Producer Nishizaki in a coffee shop beneath the studio in Sakuradai, he told me to “do the storyboards!” (Note: Ishiguro was hired as an animation director and became a regular member of the staff thereafter.)

At the time, I had only done 5~6 storyboards for Zero Tester, so I was surprised when he decided (so suddenly) that I should do this. I remember thinking, “Nishizaki-san’s an interesting person.”

Then they showed me the Pilot Film for Yamato, and I thought this was going to be a great production. I was supposed to start with episode 5, but for various reasons, it was pushed back to #6.

What are your memories of that time?

Well, I recall that the story development meeting was crowded, and it lasted a reeeeally long time. There were so many famous faces there, including: Producer Nishizaki, Leiji Matsumoto (director & co-creator), Noboru Ishiguro (director), Kazunori Tanahashi (ass’t director), and Keisuke Fujikawa and Eiichi Yamamoto (writers), just to name a few. And there was a lot of pressure, because they would request that changes be made, and I didn’t have a whole lot of time to work! 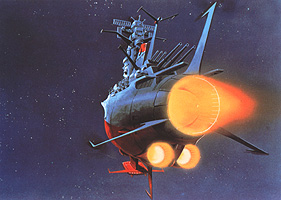 Your art appears in many places,
Well, I drew a bunch of things, around the same time as the Farewell to Space Battleship Yamato poster, and I figured they would never be used at all. I really tried hard to copy Matsumoto’s style, but it would never come out quite the same. However, those pieces were the ones used. I didn’t know at the time that Matsumoto also drew his own version of the same poster illustration.

Let’s see, aside from that, I recall the schedule for Yamato 2 was really tight. Requests like, “can you have it done by the day after tomorrow?” were common.

Was there anything else that was stressful for you?

The Farewell movie was also pretty stressful. The script ran well over 3 hours in length. I’d arrive at the office around noon and leave for home in a taxi. Those meetings were by far the longest. I really don’t care for long meetings, but I was impressed with how they developed things. If they gave us back just half the time we spent in those meetings, I believe we could’ve done better work. 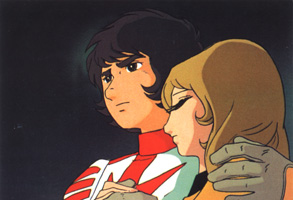 A scene from Yas’ finale to Farewell

Does that mean that you were getting burned out on Yamato?

No, that isn’t what I mean. When I first joined the Yamato group, I was very happy to be a part of a very unique production. Looking back on it now, I felt it was time well spent. Compared to other series, this was an epoch-making production. In those days, anyone who was anybody was filled with pride to be in the “in-group.” Even though there were inconsistencies, the first series was well-made.

At the time, Farewell was going to be the end. Although I’m not sure what frame of mind the Staff was in then.

So you were also working under the assumption that Farewell was going to be the last Yamato?

Yeah, that’s right. I put a lot of effort into it because of that. I’m sure even Nishizaki considered it the final project. That’s why the last scene in the movie was filled with so much emotion. They told me that I was the only one who could pull it off, so they had me do that as well. 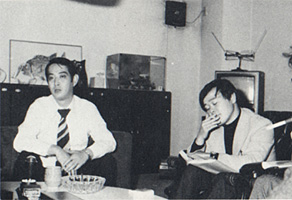 Yoshinobu Nishizaki and “Yas” in a Farewell
to Yamato story meeting, 1978

When they made the Yamato 2 series, they changed the storyline of Farewell. There were many arguments because of this. In the last scene of Farewell, Kodai and Yuki rammed the Yamato into the enemy vessel, but Matsumoto was against that. He wanted those two to survive. That’s why the last scene in the TV series changed from the ending of the movie. I suppose both Matsumoto and Nishizaki had the same goal.

Which production do you have the fondest memories of?

I will have to say Yamato 1 and Farewell.

What was the theme of Yamato?

As far as I’m concerned, there really wasn’t one. Basically, what you have is a space opera with battles. Although some have said it was a love story in outer space, I believe it’s actually closer to war games with passion and romanticism added on top. At least that’s my personal opinion.

Both Crusher Joe and Final Yamato are being released at the same time. What are your feelings about this? 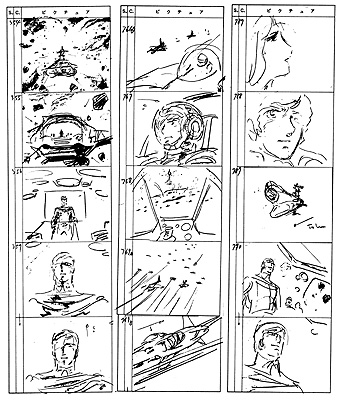 Yasuhiko storyboards from The New Voyage

It’s not a big deal for me. Yamato was a big production, while Joe was a “B movie.” The production system between Yamato and other projects was also very different. For instance, on Joe we didn’t bother with themes, meetings or all that busy-work stuff. This was also true of Gundam. Ever since that time, we wanted to do things completely different from how Yamato was done.

With regards to Yamato, what were your feelings about Leiji Matsumoto?

I felt that Yamato was created by the combined efforts of both Nishizaki and Matsumoto. It was the passion of Nishizaki and the style of Matsumoto that made the production interesting. In Part 1, Matsumoto created the settings, drew the storyboards and supervised color design.

Matsumoto doesn’t involve himself with that much intensity now, which is rather sad. Although he’s named among the staff in Final Yamato, if he were working as hard as he did in Part 1, I’m sure that this last movie would have come out a lot different. He has this knack for coming up with ideas that the other artists can’t even hope to dream up. Matsumoto’s images and Ishiguro’s directing was the combination that made Yamato great. Even though Matsumoto has become famous, and probably claims he cannot possibly work at the same level as he did back then, I bet ol’ Nishizaki could find a way to dig that talent out of him. I sure wish he’d do some digging…

What are your feelings regarding Yamato as a continuing series?

I wouldn’t mind it if they made it into an ongoing series like the 007 movies. I had no intention of making a Crusher Joe series, but if somebody should make it, then I believe it’s a good idea. (Note: someone finally did in 1989.) But some serials just shouldn’t be made. Gundam is one of those. When you stray off the beaten path from the original to a certain degree, you will encounter a time when, I believe, you are in danger of losing all passion for the work. Yamato and Farewell fall into this category, too. Bringing dead characters back to life is an example of this. Although Eiichi Yamamoto said, “It’s only fiction,” my view is that because it is fiction, that is why we shouldn’t resurrect the dead.

So the dead should remain dead…

Captain Okita in Final Yamato is also different, too. I once proposed that they take the story to a later generation. Why not have Kodai’s grandchild dig up the remains of the Yamato? I suggested that we stop bringing the dead characters back to life. But it was to no avail. They must love the characters far too much to let them go.

On the other extreme, you could just have the Yamato flying in space, and make other changes as they seem fit. They could have made a number of different stories with this approach. Having a battleship fly in space is the greatest thing, don’t you think? And I doubt there will be a design as wonderful as the Yamato after this project. If you think of the ship as an actual character, you can also come up with an even greater tale.

As far as I’m concerned, Yamato has been the greatest project for me.

Read a 2012 interview with Yasuhiko here.

One thought on “Yearning for Yamato: Yasuhiko Yoshikazu”