Here we continue our roundup of every known toy/model/etc. of the Space Battleship Yamato, already a long list even before we get to the respectable length of greater than one foot. This is the point where precision detail sets one version apart from another and prices go up accordingly.

Bandai, December 2005
Sold in the manner of collectible “trading figures,” this Yamato is divided into eight sections, each of which was available separately or in complete sets from certain vendors. Each was made to be assembled as a subsection, then combined with the others to build a complete vessel. The interior parts were pre-colored and intricately detailed (right down to a special hanger deck for the Seamless Plane) and fit together like a puzzle. It was essentially a model kit with no need for glue, so it could be taken apart and put back together at will.

Bandai, April 2006
Released a few months later, this was the same product with clear plastic exterior parts for a different visual treatment.

Bandai, February 2008
A newly-remastered DVD box set of Series 1 came out in 2008 with this gorgeous kit as a bonus item. Both began as independent projects and were eventually brought together by the mighty forces of Bandai. The model began as a daydream on the part of superfan and anime director Hideaki Anno, who hired superstar modeler Shoichi Manabe to build him the “perfect” Yamato. Their collaboration resulted in this kit, which so far has not been made available as a standalone product. A second version was released in silver plastic to represent the “reflective shield coating” from the last episode of Series 1.

Read all about this model’s genesis and see more photos here.

Bandai, October 1978
This was Bandai’s first high-concept Yamato model, one that accurately captured the ship in three dimensions for the first time and offered more than just the outer skin. Fans who were fascinated by the intricate cutaway drawings of the ship could now build it for themselves from the inside out and snap on the port hull to cover it up. At the time of its release (the same month Series 2 went on the air) it was on the cutting edge of plastic modeling and helped to propel Bandai into world-class status. It was re-released as the “New Mechanic Model” in November 1980 (with new parts and decals to match Be Forever), and released as a standard 1/700 model (without guts) in August 1980, March 1983, and December 2009.

Shogakukan, December 1978
Stepping away from plastic and metal for a change, this one was part of the Farewell to Yamato Paper Model set. This was a collection of pieces printed on cardstock that included Yamato, Analyzer, a Cosmo Gun, Dessler’s Battleship, a Comet Empire Missile Ship, and Zordar’s Dreadnought. They were not as fully-dimensional as the “papercraft” models that would follow, but made up for it with variety.

See the pages of this set’s instruction book here.

Taito, March 2007
World-famous arcade game manufacturer Taito is also in the toy business, as evidenced by their “Super Mechanics” line, sizeable plastic replicas of anime spaceships. The Taito Yamato sports the classic action features; rotating turrets, popout wings, and an opening landing hatch. Taito later released a second edition of this toy with lights and sound (activated by a handheld Wave-Motion Gun trigger) in December 2008, then reissued a lightup-only version in December 2010. Though somewhat lacking in sculptural detail, its high-impact plastic makes it extremely durable. In other words, an ideal gift for the younger Star Blazers fan in your household.

Taito, March 2011
Four years after Taito’s first edition of this toy, this version was released as a prize for readers of Weekly Yamato Fact File magazine from publisher DeAgostini. Readers who collected the first 60 issues could send in proof-of-purchase emblems and receive this special edition Super Mechanics Yamato as a reward. In addition to a metallic paint job and a custom stand, the bow was resculpted to smooth out some of the inaccuracies of the previous releases.

Keibunsha/Kodansha, August 1983
This one came from the Space Battleship Yamato Papercraft book, one of a handful for various anime programs in the early 80s. The fad was short-lived, but provided an inexpensive alternative to plastic models and offered five construction projects in a single book: Yamato, Dessler’s battleship, a Black Tiger, a Cosmo Tiger, and Analyzer [IQ-9]. The concept was revived in 2001 with the publication of Yamato Real Papercraft.

Bandai, November 1977
This unique kit was sculpted in forced-perspective to mimic the iconic “Yamato-in-flight” image that had achieved symbolic status with the release of the first movie in 1977. The bloated bow and shrunken stern looked very weird from the side, but made for a convincing simulation when seen as intended. It was an odd choice for Bandai at the time, since fans were still clamoring for a screen-accurate Yamato, but it was the only one to successfully capture those dramatic proportions. It was re-released as the “Image Model” in July 1978 and the “New Image Model” in August 1980.

Bandai, April 2001
After a long hiaitus of Yamato toys, Bandai threw down a fearsome gauntlet to other toymakers. This Yamato stretched to an impressive length and easily rivaled all previous Bandai Yamatos for precision and detail. Constructed of both metal and PVC, it had an impressive heft and numerous action features such as internal lights and sounds. Out of pure fanboy bravura, it came with a bonus “Cosmo Cleaner D” kit packaged in the mode of the classic Bandai mini-models of the production years.

Bandai, November 2010
Though exactly the same scale as the Popynica version, this one is a completely new sculpt from bow to stern with many structural improvements, light and sound features, a larger base, several fightercraft, and a bonus Gamilas Drill Missile. To date, it embodies the best production values in the category of Yamato toys. The GX-58 Andromeda was released in early 2011.

Taito, November 2009
This version of Taito’s Super Mechanics Yamato was modified to match the ship’s redesign for the Yamato Resurrection. The original 2007 toy measured 40cm and was scaled at 1/665. This new one added 5 cm to the length and rescaled to 1/590. One advantage of creating an anime spaceship in CG is that the data can be used to generate a solid, real-life version, and that’s exactly what this is. The details and proportions precisely match the on-screen Yamato, which is a significant first.

Dorakudo, release date unknown
This company makes some of the most appealing garage kits out there, big beefy versions of everyone’s favorite EDF ships with resin and brass parts aplenty. All are 1/500 scale, which puts them in the same class as Bandai’s biggest Yamato, roughly 18 inches long. Their 1/500 Yamato is based on the Playstation redesign and is one of a growing number of exquisite models for experts only.

Visit the Dorakudo website here to see them all.

Fujitsu Zero Taro Store, December 2009
Yamato Resurrection brought with it numerous opportunities for product revivals, and “papercraft” was one of them. This kit was released the day of the premiere in a cardstock set to be cut out and assembled bit by intricate bit. One big advantage of paper over plastic in this case is scalability; in 2011, the same company published a 1-meter version by simply doubling the size of the printed pieces. (That version is shown above.) 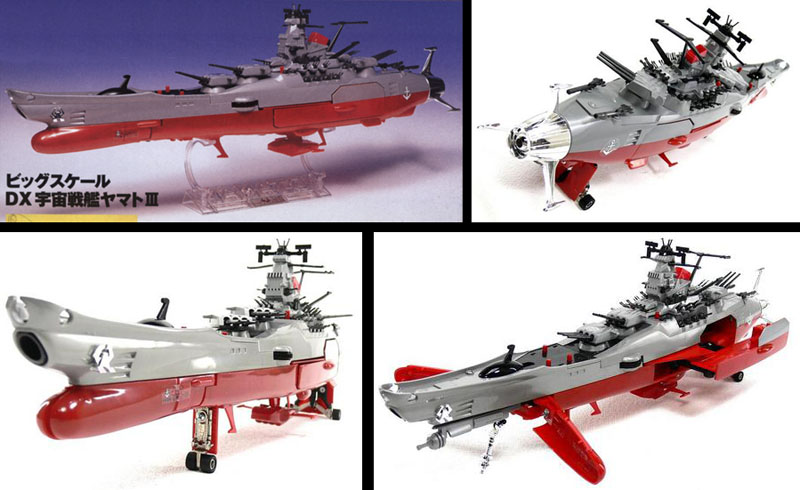 Popy, December 1980
This entry held the title of biggest Yamato toy ever made until it was finally topped in 2006 by designer toymaker Liberty Planet. More plastic than metal (so that a kid could actually lift it), it preserved and one-upped all the action features of the smaller Yamatos, as shown in these photos. Gun turrets could turn and panels could open to reveal inner parts and flip-down wheels. Other panels in the flanks could slide out to reveal support ships, similar in intent to the Cosmo Hound in Series 3.

Bandai, November 1978
This finely-crafted behemoth was the largest Yamato plastic model to be found until Bandai’s 1/350 version was released in 2007. It came bundled with an Analyzer kit and pre-painted hull parts. It was re-released as the “New Cosmic Model” in August 1980 with new decals, then again (without prepainted parts) in March 1983.

Bandai, December 2010
Bandai re-delivered with this new model, which corrected nearly all the shortcomings of the 1978 version and added some subtle new details of its own. One thing that set this model apart from its predecessors was the color of its plastic, engineered for the closest match to the original animation colors we’ve seen so far. It also has a unique backstory: it was derived from upgraded ship designs for the Space Battleship Yamato 2199 remake TV series.

Nomura Toy Co., 1978
Being big doesn’t necessarily mean being accurate, and this is easily the least accurate Yamato of the bunch. On the other hand, you could attach string to it and fly it in the air, so the tradeoff had a purpose. 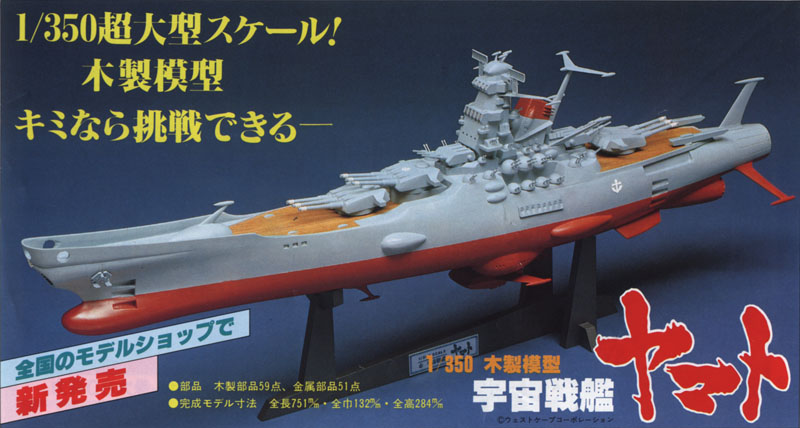 Imai, 1980
This was essentially the first Yamato garage kit, but it didn’t come from a private company; Imai was one of the few rivals who could give Bandai a run for its money in the early 1980s. Theirs was the first 1/350 scale Yamato (which Bandai wouldn’t match until 2007) and the parts were made of wood and metal. It stretched to almost 30 inches when built, and required the skills of a ship modeler to reach its full potential. The kit was reissued in 1997 with different box art and again in 1999, this time without the white insignia decals. The image shown above is an ad for the original 1981 kit.

See a gallery of photos here. See a Japanese blog documenting one modeler’s work with this kit here.

Bandai, January 2007
Fans who just weren’t satisfied with previous Bandai kits got a new reason to go on living when this monster arrived to amaze everyone in 2007. It was the brainchild of Hirofumi Kishiyama, a member of Bandai’s hobby development team, who read about plans for an anime revival and championed the idea of a huge new model that would show off Bandai’s technical capability as never before. The result was an enormous beast with over 600 parts that came with wiring for lights & sound and a handheld Wave-Motion Gun trigger to activate moving parts.

The kit was first revealed to the public at a hobby show in October 2006, where it drew bigger crowds than any other display. It was based on the Playstation redesign by veteran mecha designer Kazutaka Miyatake, and a silver coated version was released in November 2009 (above right).

Read more about the kit and see an extensive slideshow here.

Wani Publishing, January 2001
This revival of the papercraft fad was a book containing all the pieces needed to build an almost yard-long Yamato, Kodai’s Cosmo Zero, and a Black Tiger. It was one of the many products released during the copyright tenure of Leiji Matsumoto, and brings the total number of paper Yamatos to five.

Liberty Planet, 1999-2008
Designer toymaker Liberty Planet’s masterpiece was this picture-perfect polystone/PVC Yamato, a full meter in length, prepainted and needing only minor assembly. The version shown here is actually the second edition from 2006; the first had a slightly inferior sculpt and was released in 1999. (See an extensive photo-record of both versions here).