From this point forward, we leave behind all the Yamatos you could actually buy and enter the realm of those made for pure enjoyment. With a single exception, these are all one of a kind. Get ready to be impressed. 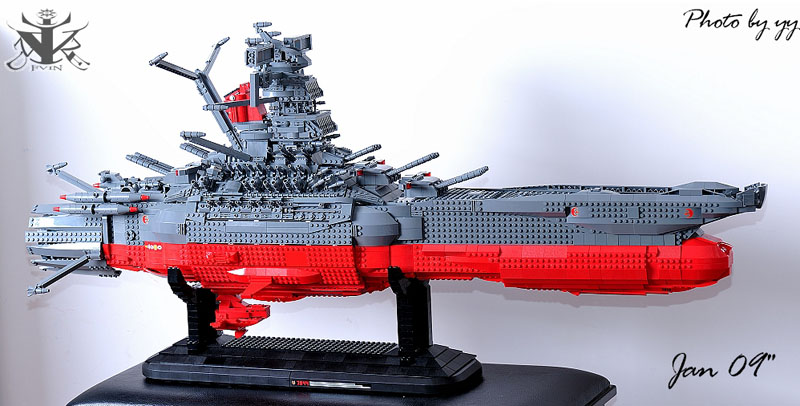 Strictly speaking, this isn’t in the size class of the other ships on this page, but it nicely demonstrates the flight path we’re about to take: individual craftsmanship. See more photos here. 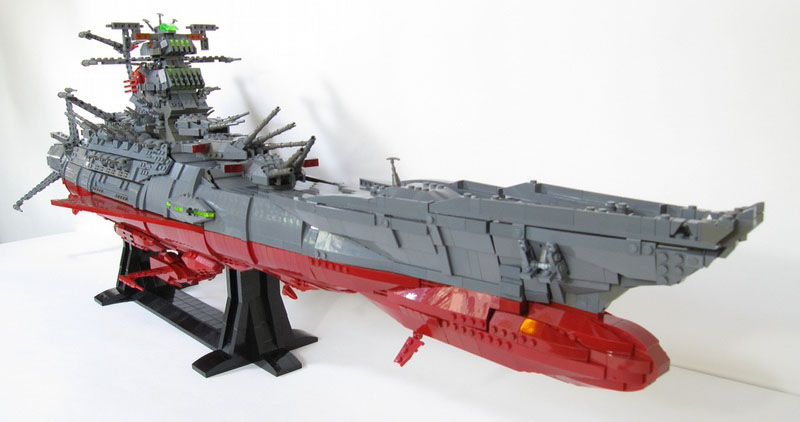 At nearly four feet, this whopper (based on the live-action movie version) puts us squarely in the realm of giants. From here on, they’re all too big to have been commercialized, though some were definitely built for purposes of commerce. See more photos of this model here. 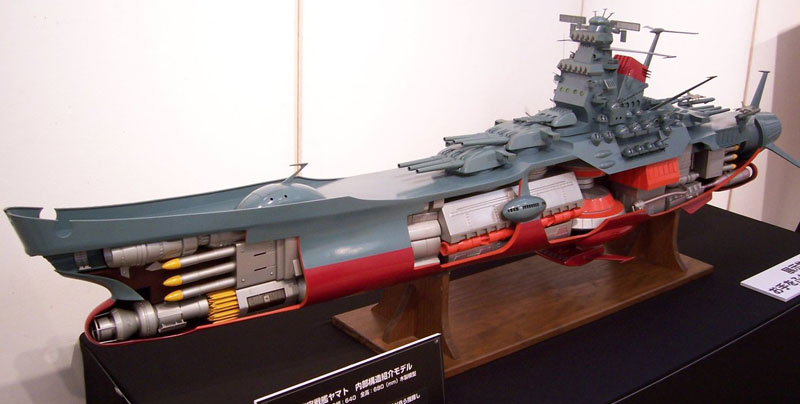 Yoshinobu Nishizaki threw a party in November 1977 to celebrate the tremendous success of the first Yamato movie. To help dress it up, he commissioned the building of this amazing model. It was no cheap plastic throwaway; it was blueprinted by a company named Mori Art Design and built by Momiyama ship model factory. Its all-metal fabrication was by Gunze Model Craft, who produced models for Toho monster movies.

It became part of a traveling exhibit of other props and artifacts throughout the production years, so a second one was made to help promote Be Forever Yamato in 1980. Both are still alive and well. One is owned by Leiji Matsumoto and was on exhibit at the Battleship Yamato Museum in Kure until it was moved to nearby gallery dedicated to Matsumoto. The other was owned by Yoshinobu Nishizaki and has now been inherited by Enagio studio; it was called back into service to promote Yamato Resurrection in 2009.

Read the full history of the Cut Models and see more photos here.

This was another Space Battleship model on display at the Battleship Yamato Museum in addition to the Cut Model. As of 2009, it hung suspended in a darkened case, dimly lit with no signage of any kind. Friend-of-this-website and Japanese author Sword Takeda reports that it was originally built out of wood by a Yamato fan in Southern Japan who generously gave it to Leiji Matsumoto as a gift. Its whereabouts as of this writing are unconfirmed.

This one requires true dedication. Not only did it require thousands of parts and precise engineering, it’s also big enough to monopolize a sizeable portion of an average room (if not an entire carport). See more photos here.

Although this monster isn’t based on any existing model kit and has some pretty obvious inaccuracies, it deserves honorable mention for sheer size alone. These photos were posted by the builder in an online auction. The reason for its contruction was not explained; it might have been for a public event that came and went long ago. Its materials suggest that it may have been intended as an outdoor display.

This one was built to promote the feature film and made its first appearance in a September 2009 event called the Perfect Revival Exhibition. It then went on the road for a series of product fairs. It looked to be made of wood (plastic would have been too brittle and metal far too heavy) with multiple coats of paint. Unlike the Cut Model, hull details were drawn on rather than scribed. That diminished it somewhat in terms of quality, but you can’t argue with its size. Its most recent sighting was at the December 2010 memorial service for Yoshinobu Nishizaki.

As the live-action movie was in post-production during the summer of 2010, Yamato declared its approach “in person” at the 32nd World Hobby Fair in Japan. The event took place June 19 and 20, and featured a booth with a 3-meter tall Yamato bow seemingly rising up out of the floor. Its Wave-Motion Gun lit up and fired periodically. Afterward, it became part of a multi-city promo tour and eventually ended up in the lobby of the TBS building (Tokyo Broadcasting System, the film’s major sponsor).

After the December 1, 2011 premiere of the film, Yamato popped up again at the “Tenjin Fantasy of Light” holiday display in the city of Fukuoka. Its wire structure was modeled on the TBS version.

ANOTHER huge bow busting through the floor! This was actually the first one, the centerpiece of Yamato Expo ’10 in February 2010. The scale was given as 1/3, but at least one Japanese blogger opined that realistically it was more like 1/6. Though the overall proportions were not entirely anime-accurate, the modeling and attention to detail was praised by all, especially on the rocket anchor.

See more of this model (with YouTube links) here.

This monster arrived on November 20 when the Yamato prop & costume exhibit opened in the plaza of TBS headquarters in Akasaka, Tokyo. The ship became the natural center of attention, its massive prow ripping free of Earth to head off to outer space. The stern was unbuilt, still “below ground,” but the exposed portion of the ship alone was 50 feet long. The model had working parts as well; lights in the bridge windows, rotating shock cannons, and a Wave-Motion Gun laser light show ignited on the hour after sundown.

See a gallery of photos here

The centerpiece of the Battleship Yamato museum greets you as soon as you step inside: a magnificent 1/10 scale model of Yamato that commands both your attention and imagination. Every rivet and rope line is here, along with 1/10 scale crewmembers that help keep it all in perspective for you. It’s interesting to note that this one just about matches the Live-Action Movie Model for length. The odds of them ever being seen side-by-side are probably zero, but at least they exist in the same country.

This massive sculpture was built at the February 1979 Sapporo Snow Festival in Hokkaido. About ten large snow statues were made with an emphasis on film and television characters. Yamato was second only to Star Wars as childrens’ most requested image. It had an overall length of 24 meters and a height of about 14 meters (45 feet). It was created by the Sapporo Fire Department under the guidance of SDF personnel, taking about 21 days and 350 trucks of snow. It was rigged with lighting for the Wave-Motion Gun, the bridge, and the rear engine nozzle. Because they used the Bandai “Image Model” as reference, the bow was extremely large and gave a great impression of scale. It’s a little hard to see in this photo, but there are also some characters, about 12 feet tall. 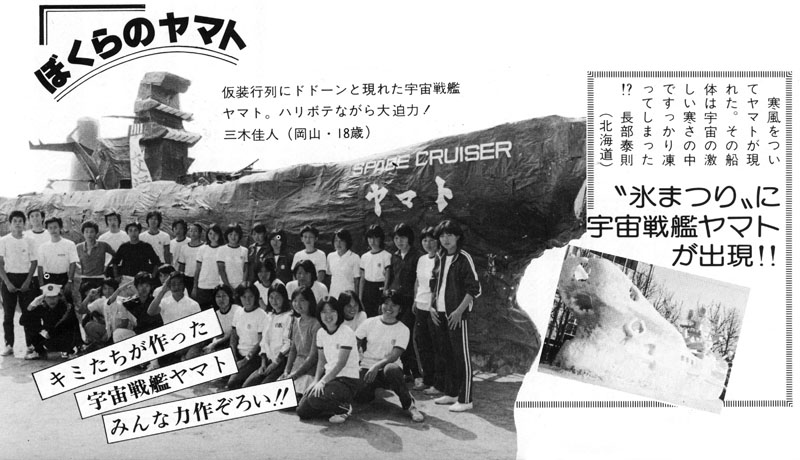 A mockup built by fans, pictured in a 1978 issue of the Yamato Fan Club magazine. No data was given for its dimensions, but it looks pretty darn big. Someone get us a time machine and a tape measure.

This 1/1 scale mockup was the exterior shooting set for Men of Yamato, a 2005 WWII movie that rivals Titanic for special effects and Saving Private Ryan for intensity. This portion of the battleship was built for the production in the same city that built the original, and it was opened to the public for a limited time afterward. Many of its surviving elements are now on display in an annex to the Battleship Yamato museum. (See photos of the display here.)

See the trailer (and related clips) on YouTube here.

2 thoughts on “All Yamatos Great and Small, Part 4”